I know, I know, I know... I have been posting about too many house prep stuff and grand kid stuff.  We need more RV posts and fiber posts.  I have blog readers out there that are family, fiber friends, and RVing friends.

Today I will do some RV things.

First off, if you have been reading my blog for any length of time, you know our motorhome only has a micro/convection oven.  No LP oven built in the rig.  At this time, I do not want to sacrifice my precious drawers to install one below the cooktop.  So we found the next best thing, my Coleman Instastart oven!

It can run it off the small 1 pound cylinders, or hook to a BBQ grill sized tank, or even a hose from our Extend a Stay device that feeds off the motorhome's big built-in propane tank.

For the last four or five years, we would stuff my oven in the basement compartment, but it was getting a few scratches from other things around it.  Now I found a heavy vinyl tote bag specifically made for carrying it on Ebay!  So my happy little Easy Bake Oven (the nickname my family gave it)  can ride in style and keep it's pretty finish! 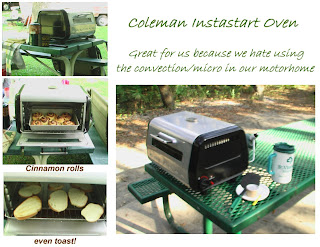 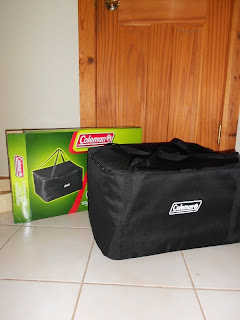 Next up.... remember when we removed our couch?  Well, there was a wide opening cut into the side of the fridge wall  to accommodate a ductwork that snaked under the couch to the other side.  Once the couch was removed, we didn't need that snake duct either.  Steve cut it short and moved the vent over to the side wall of the fridge.    He made this board to cover the wide opening and reinserted the same directional vent cover that was originally on the other end of the duct.  We don't use this furnace very often.... (it's noisy and burns up a lot of battery power)   But nice to have that area of the wall completed and neat looking.
I think he did a very neat job! 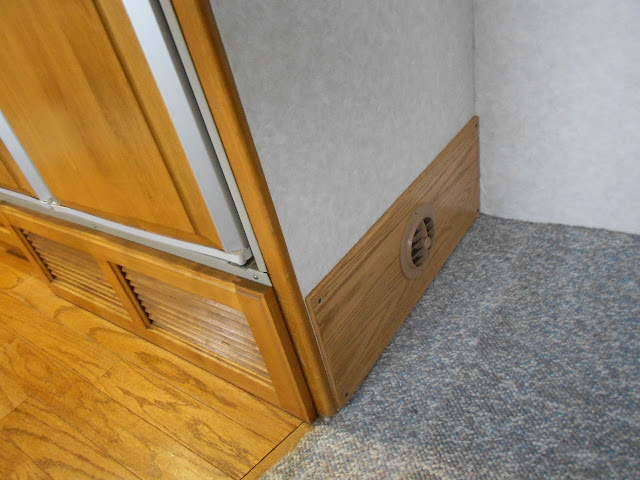 The next thing up on RV subjects I don't have pictures of (yet).  Seems my MasterMind Husband decided we have room on the roof of the motorhome for ONE MORE SOLAR PANEL...  He has been watching Ebay like a hawk and finally found one that matches the others ones we already have.    I guess that is his Valentine's Day Present to us?
So he got one more 100 watt panel to add to the other four 100 watt panels.  Our Blue Sky solar controller can handle the extra panel, so we might as well, right?    He made up the brackets already to match the ones he made before.
If you wish to read about our solar installation, here is a link:
Solar Panel Installation on the roof of the motorhome
I am sure as soon as we get a half-warm winter day, I will be out there holding the ladder and he will be up there installing it.  Ahhhh what a guy!
We are recovering from our weekend of carpeting installation, and the visit of the grandson.   Things are back in order and more things are being tackled in the great DE-CLUTTER PROJECT!
I ran into town this morning to help watch Chelsea at what I THOUGHT was 4:45 a.m. .. It seems my bleary eyes were looking at a watch saying 3:45, so I was up an hour early, unbeknownst to me.   Yup, I planned to go out in the dark and cold.  While waiting to warm up the Tracker a bit while I was buckling in the car seat.  I drove through the frigid night air into town just as Mark was readying to leave for work in Arkansas.  He seemed shocked that I was there at 4a.m.  Here I was thinking it was 5a.m. by this time.  Drat!   Erin didn't need me till 5:15!    She was still sleeping upstairs, as was Chelsea.   So I made myself at home on their couch and dozed off for another hour.  I had to warn Erin gently by calling up the stairs once I heard her alarm go off, otherwise I would have shocked her to come downstairs to a person laying  on her couch!  Erin got off to work by 5:15 and I got to hang around waiting for the little beetle bug to wake up.
That stinker Chelsea slept till 7a.m. when I had to wake her up and get her ready for the day care center.  She firmly announced she was going to G'ma and Poppa's house... and see Duke and Ducky!  She was quite disappointed to only be going to the daycare.  Sigh.  But if I kept her out for the day, it goofs up their prearranged schedules of ratio of teachers to students, so she has to go.    I had too much to get done around here today anyhow.  But this evening I ran into them at the grocery store--- don't ya love small towns?   She got extra hugs and kisses again from her Granmuddah.....
Well, off to bed,
tomorrow I will do a post about fibers,
I promise!
.
Posted by KarenInTheWoods at 10:28 PM