Well, we were having trouble with our generator last year and kinda ignored it …   but now this Spring, dear Steveio wanted it fixed and working.   We have a little time before camping season begins.

The great guys at Flight Systems were VERY helpful with troubleshooting.   Randy was “The Guy” to talk to about the system.
Their diagnostic troubleshooting information is the best and we sure appreciated their help.   They have downloads of information and what things to test first, second, third etc. and using a voltmeter, you can diagnose what is wrong with your own generator before paying for costly repairs.

So after checking it all out, we found a shorted brown burnt spot in the control board, and a bubbled area on the voltage regulator.  We think that our old batteries with the bad cells and the exploding expanded case on two of them ruined our generator somehow with a back surge of something or other.  (we have all new batteries now)
We threw a new control board at it, then a new voltage regulator, then cleaning the slip rings, and replacing the brushes (plus the ceramic holder cracked so had to replace that too)  … finally we came to the conclusion that it was only putting out 55 volts and not 120vac.   That meant the half of windings on the rotor were bad.  Sigh.
So that meant a removal of the generator, and take off the rotor and send it in to be completely rebuilt.  We found a great guy down in Ohio,  name of :

SAM BORCK - 11392 CTY RD 5 - DELTA, OH  43515 -   419- 466-0485
He seemed to know the generators inside and out, exactly the specific stuff about our model and year and did very prompt turnaround, we got it back within a week of him getting it!  Cost was $365 including his shipping it back to us.  What a deal compared to what Onan wanted for a new one, or what even other places on the net wanted for a rebuilt one.

I was the Gopher Girl and Steve patiently stopped from time to time to let me take pics of each step.
Here are the pics of removing it last month while we still had snow. 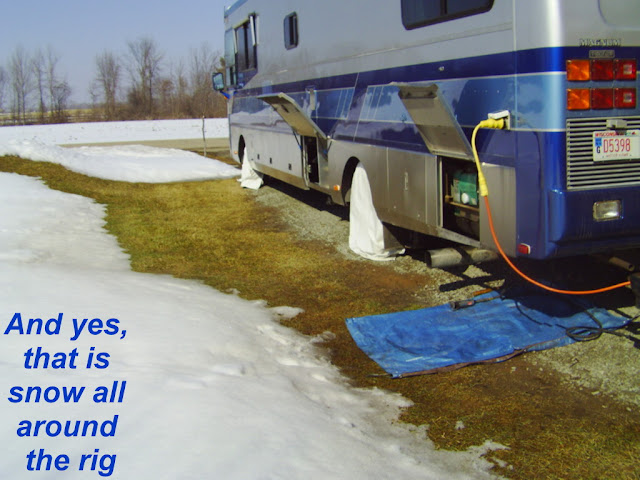 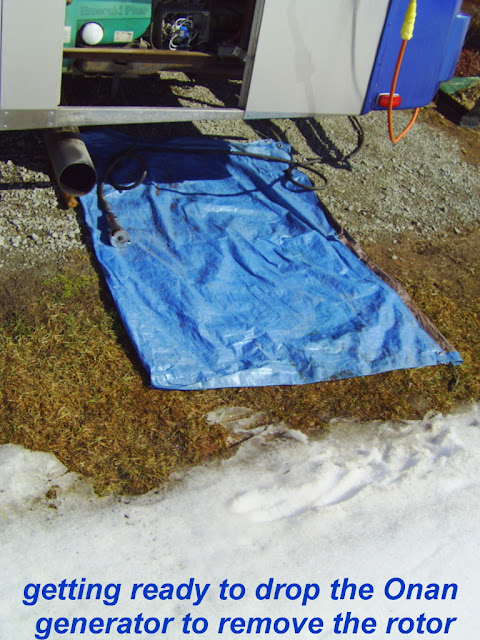 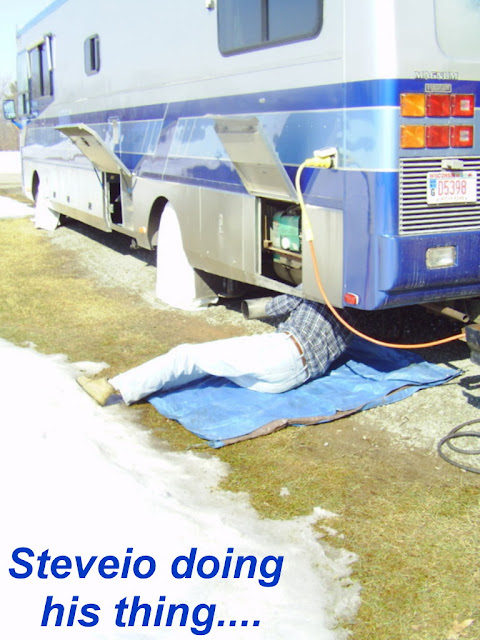 (p.s.  in case you are wondering, that funny yellow adaptor and orange cord hanging off the side of the rig is our AC  line from the garage 20amp outlet for shore power.  This adaptor is a screw on type bayonet mount for 50amp plugs.  Instead of keeping our heavy black 50amp cord out there all the time, temping for copper thieves, we use this adaptor and a regular extension cord, sufficient for light enough loads while parked in our driveway)


Okay.. back to the generator---    Now it’s a couple weeks later and we got the rotor rebuilt and back.. and the snow is gone! 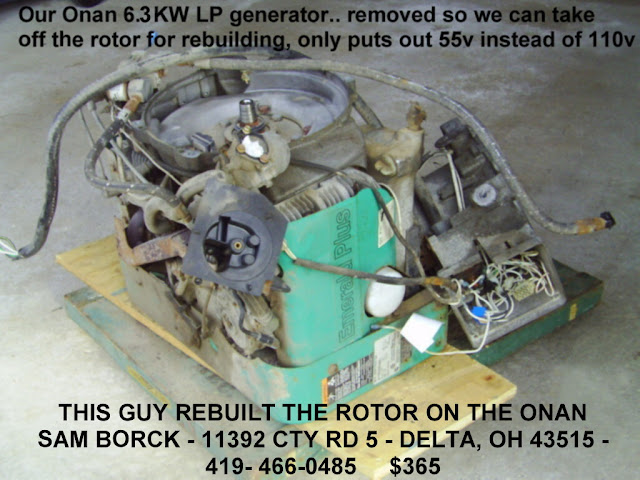 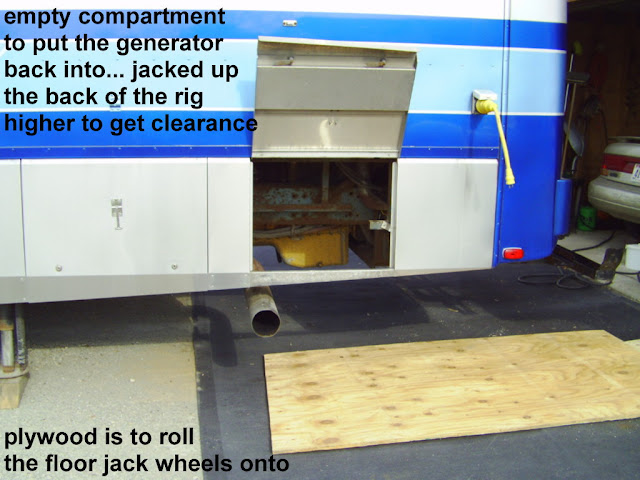 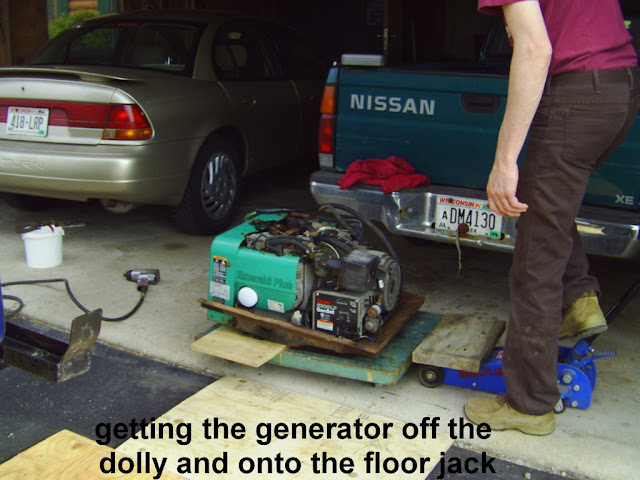 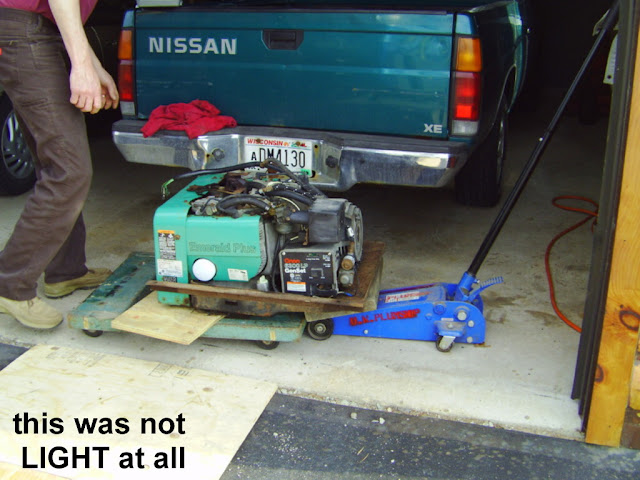 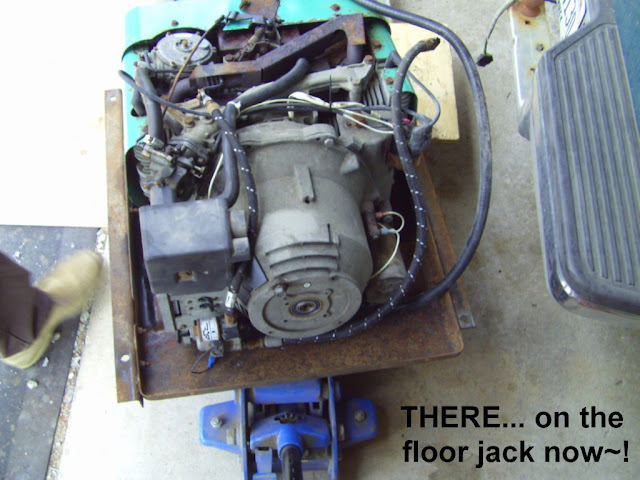 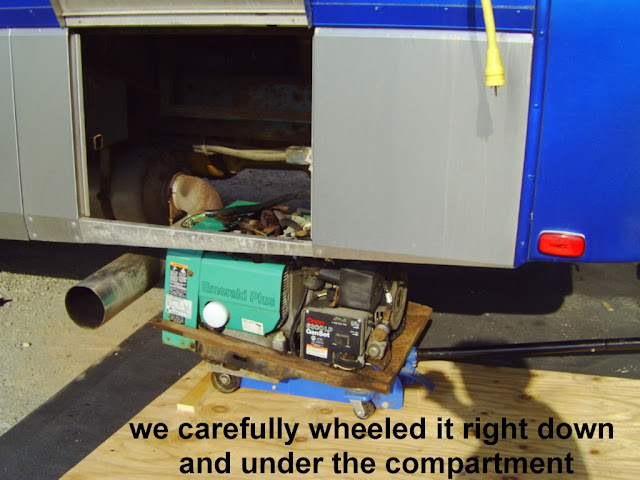 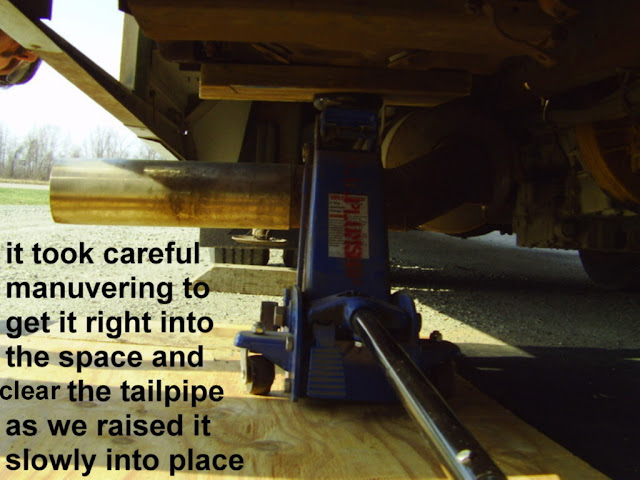 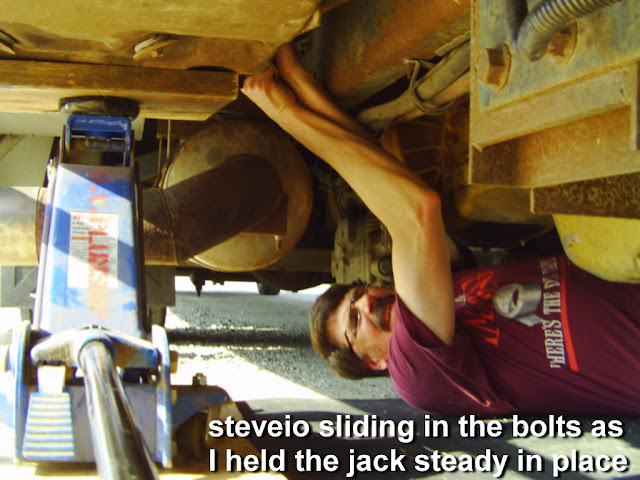 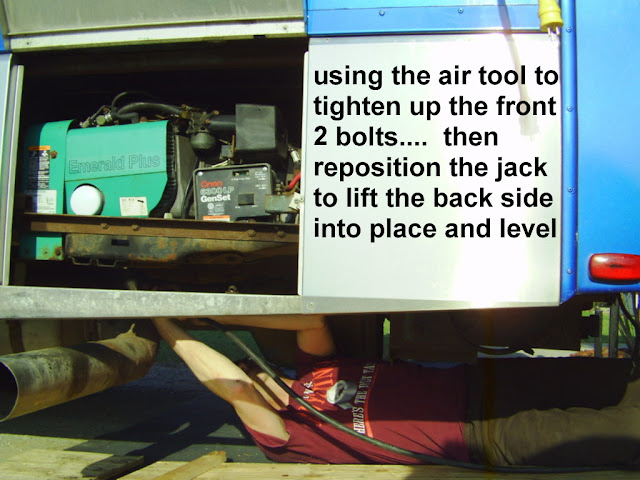 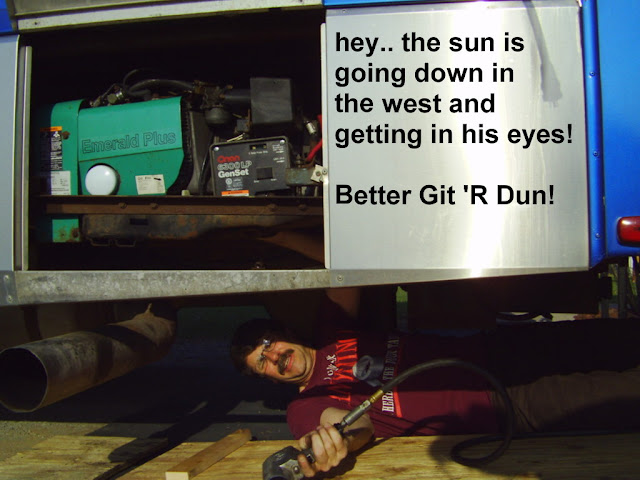 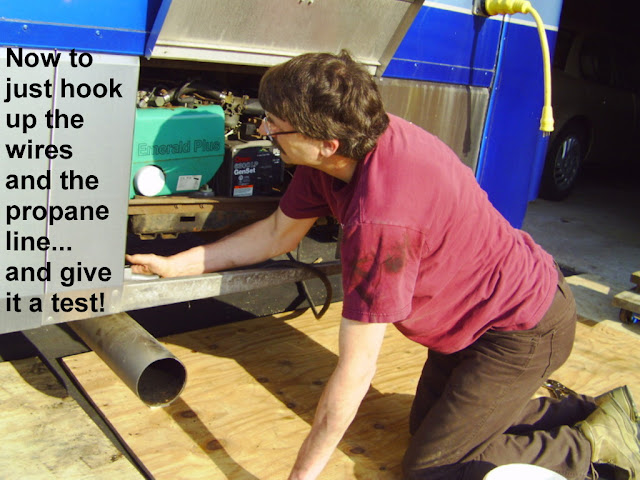 All those pics were taken yesterday evening …  now it’s Saturday morning and Steve finished up the connections. We attached the propane line, bled it, checked for leaks… double checked all our connections…. and hit the button! 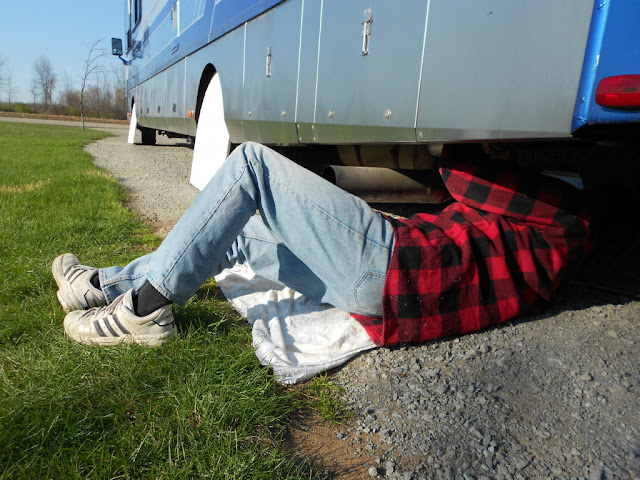 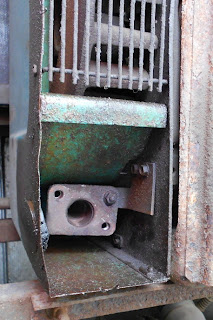 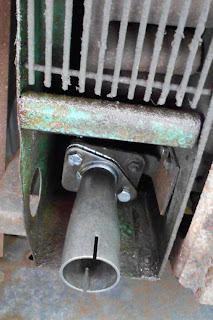 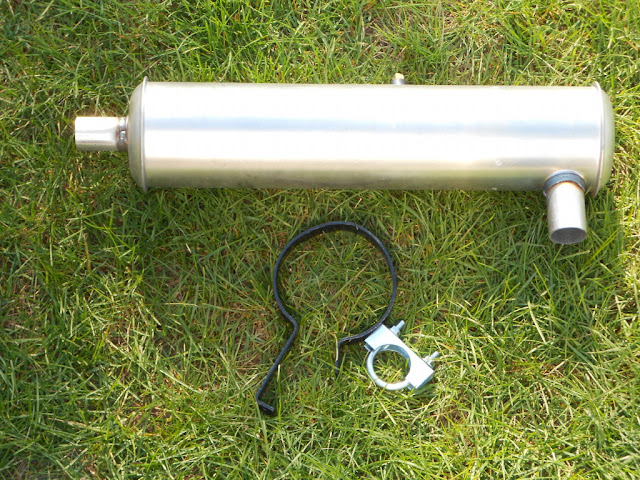 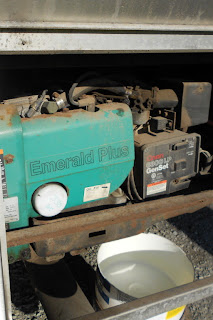 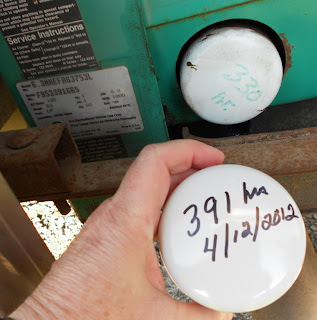 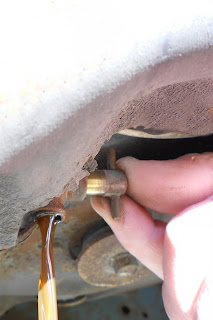 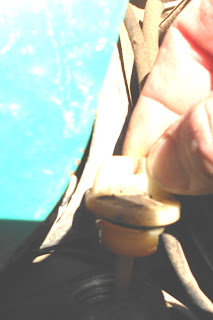 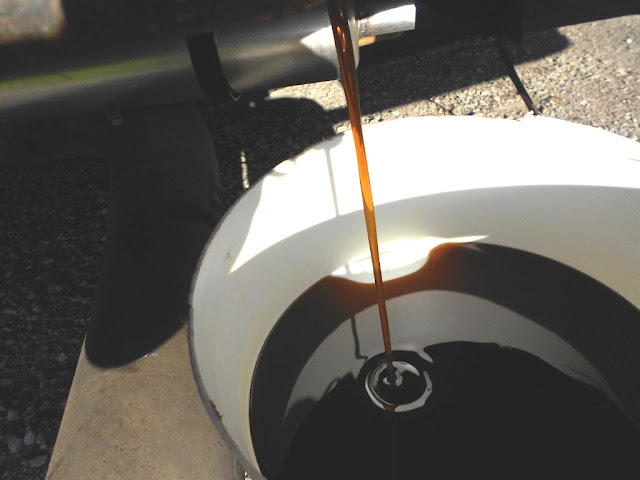 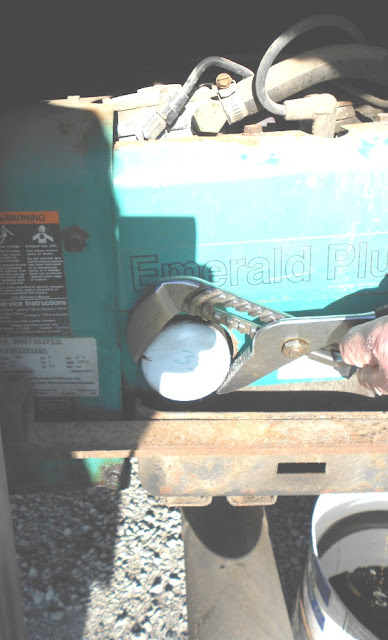 
Posted by KarenInTheWoods at 11:59 AM