We have the motorhome all packed up and ready to roll for the weekend.... actually it is for a longer four day weekend!   We are going down to a cute little weaving studio in  a tiny village called Shopiere, WI.  It's owned by my friend Juanita Hofstrom and the name of the studio is called Vavning.   (about 200 miles from here)

She bought this vacant church and made it into the most comfortable studio, complete with lecture hall, studio space, kitchen area and offices.   It is in a tiny town about 4 blocks long, nestled in a vally along a bubbling brook and a tiny park.   I have been coming here for close to 10 years now.  I help Juanita hostess the event, and she contracts with Jason Collingwood to come and teach for the 3 day session.  He is a famous weaver from Great Britain,  son of the late Peter Collingwood, an innovator of a special technique for rug weaving called Shaft Switching. 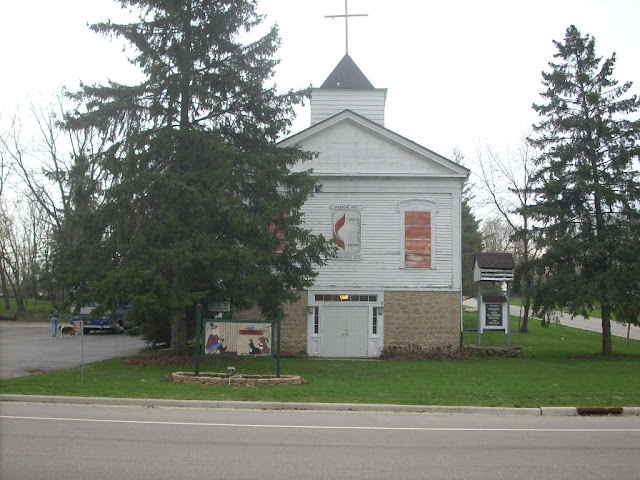 We come early and help Juanita and Norm with some projects around the studio, and in return we can park for the four days in their parking lot.   Sure saves on the hotel fees and transportation from nearby Beloit.   Usually about 20 people attend and it's a very intense hands-on workshop with evening classes of interesting field  trips, swap meet of weaving supplies, show n tell, and eating out with groups for social times. 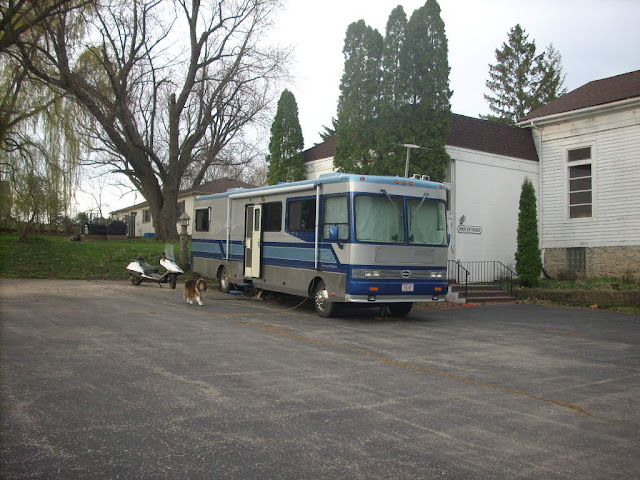 Being on site, I can unlock the studio early for weavers who want to come and get in some loom time before the classes start, or stay late into the evening after classes are done.  Also I am known as the Aide De Comp, or the Kitchen Wench...  we prepare various snack foods and lunches in the kitchen, and on the last day I prepare a full meal for all the weavers and their significant others to join in and wind up the conference.

Steveio finds many things to do while I am busy in classes.   He later joins us for socializing, eating out down the road at the restaurant, and just hanging out with many of the workshoppers spouses who are also looking for things to do.  Norm knows lots of cool things to do and see in the area, so Steveio hangs with Norm too.

In 1996 we were here in April in our Coachmen gasser motorhome... and Steveio took a ride on the scooter to get a replacement part for our Onan generator.  Lo and behold, he just HAD to drive past an RV dealer in Rockford, Illinois.  There he wandered among the rigs, and saw "THE MOTORHOME of his DREAMS!"    He came back all bubbly and excited and wanted me to go see it too!  But I didn't want any more payments and for sure didn't want another bigger motorhome.   But he was persistent.  Each week he would check the website and see if it was still there.  Each week it was.   Finally... finally.... (after some life-changing events)  I gave in to go and just "look" at the rig.   Three days later, it was ours!    So THAT is how we got our diesel pusher.
Posted by KarenInTheWoods at 7:17 AM