As a bit of information, after yesterday's post.  We got a total of 8 inches of snow before that was all said and done.... YUCK!
Now on to the campground review:
(this is one of series of posts of various campgrounds we have been to over the years... I am going through my files in alphabetical order and posting past camping trips in my blog.... something to do over this long long winter---- sigh)

Shakey Lakes is one of two nice parks run by the Menominee County Parks system in the Upper Peninsula of Michigan.  It's only about 65 miles from our house, so a nice hour's ride and boom, we are there.  It's actually a connected group of 6 different small lakes. 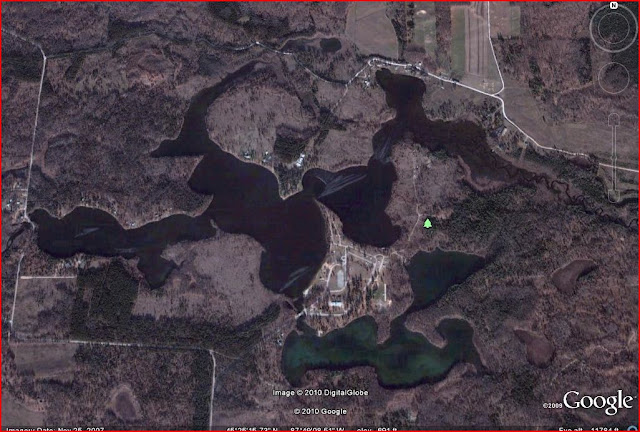 Great for fishing, boating and swimming.  In the evenings you see cottage folks from the surrounding lakes floating along on their pontoon boats, slowly cruising the lakes as the sun sets. There is a snack shack with some fast food, boat rentals and ice cream!   The county's fairgrounds and pavillions are also located in this park, so at county fair time, I am sure this place is a madhouse!!!!!
Shakey Lakes County Park information

The campsite we chose is located down a hill on a little peninsula and is relatively quiet in contrast to the rest of the campground.  Most of the sites in the main campground area have hookups, both 30 and 50 amp sections.  Many sites are occupied by a lot of seasonal campers. They have quite a community!   Rows of trailers next to each other, tight in and crowded.  So we asked to go down the hill to the rustic sites (no hookups)   These are the rustic sites generally used by the tent folks, but since we don't need hookups either, it was fine for us to take this site.

This was in May when we camped here, and the grass was just greening up and the trees just starting to leaf out.  They had a big invasion of an insect called the Gypsy Moth larvae which ate all the leaves off the trees in previous years... so many of the hardwood trees had died, leaving just the birch, popple and pines.  The campgrounds are full of stumps cut off flat to the ground from many many trees that died. The ones remaining now are sprayed and the park is monitored for prevention.  They also ask that no ropes (i.e. clotheslines, dog leashes, overhead  tarps)  be tied to any tree which might damage the bark.  Each tree is precious in their park and many new ones are planted to replace the ones they lost.

It was a lovely sunny morning, so we took my loom outside so I could weave in the glorious daylight.   I had my coffee cup, my tiny MP3 player with small speakers (playing softly)  and I was able to enjoy the morning in my own special way.  Creativity is at it's best when the artist is at peace.

The skeeters were kinda pesty in the morning, but by midday they disappeared as the breezes kicked up.  This was the view from the campsite across from us.  How nice is this?

The skeeters started to get REALLY bad by about 4-5 pm.  The breezes had died down and they became voracious.  There had been heavy rains the week before, so I think this was a bumper crop of mosquitoes that had hatched.   Well, we had a new toy to try that we had been told about.  Out came our THERMOCELLS!

Wheee heeeee  We were skeptical at first, but boy oh boy, we were completely unprepared for how GREAT they worked!

Now remember, about 3/4  of the folks here are seasonal campers all set up and can't just pull out and drive to another campground because the bugs are bad. Soon the skeeters were totally swarming and awful. NOBODY was sitting outside. Everyone was rushing from their campers to the bathrooms and back, flailing their arms like pinwheels. You could not even breathe in without inhaling the danged things. We lit a Thermocell up, and it was totally amazing....


It's like an invisible bubble of protection about 10 feet all around you in any direction.  Above, to the sides and behind.  You can SEE the mosquitoes 10 feet away swarming against the invisible protection.  They  didn't dare come near!  There is a tiny faint scent you can catch a whiff of once in a while, but nothing strong or stinky like bug sprays or dope or citronella.   I have damaged lungs and can't tolerate any fumes of aerosols, chemicals or even scents like perfumes or candles or the like.  But this does not bother my lungs one iota.


We sat by our campfire with a Thermocell on a little table between our chairs. Our dogs huddled in close. We sat out and just totally enjoyed ourselves. Many folks stopped by our site to see WHY we could sit out while they were doused with bug dopes and lotions and sprays. One couple was even wearing screen hats like beekeepers wear, no kidding. We should have been earning a commission for all the impromptu advertising we were doing! We could have bought up a bunch of Thermocells ourselves ahead of time and sold them off at a profit..   tee hee.


The next day about 9 or 10 various camping folks around us drove the 30 miles or so to the nearest Walmart in Marinette to buy up their remaining stock of Thermocells. Some folks who drove the whole way didn't get them, and drove on to Green Bay another 30 miles after seeing how well ours worked. THAT is how badly they wanted them after seeing ours work.  They all came back to our campsite to tell us THANKS! 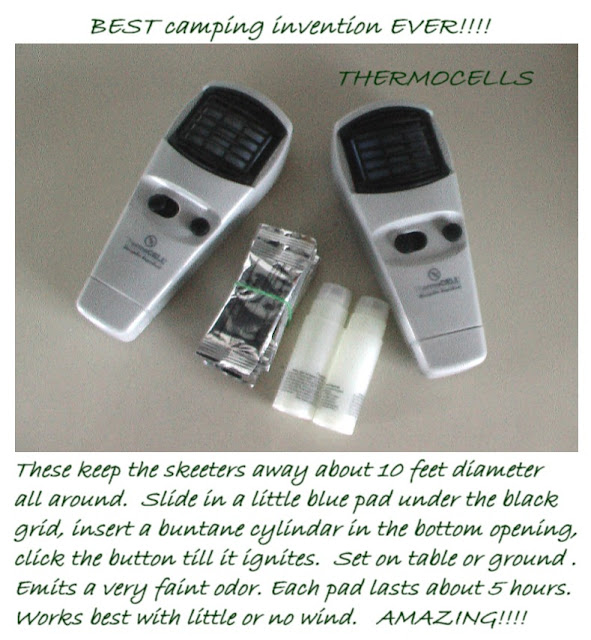 Walmart is now carrying them. Gander Mountain, Cabellas, Sportsmans Warehouse.  The fancy hunting and fishing lodges up in Canada and Alaska have these Thermocells in large quantities and send out the ones that clip onto the belt for their guests. The odor is minimal (almost undetectable) compared to repellant sprays or lotions that the animals can smell on the wind when hunting. Fishermen like to keep their hands free of any sprays or lotions that can get on the lines or lure or bait.


Plus we learned that we like using the Thermocell with babies and small children around so they don't have to be slathered with lotion or sprays to keep them bite free. Babies put their hands in their mouths all the time and this eliminates the danger of chemicals being ingested. Our dogs even huddle in closer to us when sitting out in the evening with the Thermocell on. They learn those mosquitos buzzing around their heads go away when they come sit close to us.


Our home is on a river in the woods and we are swarmed with skeeters for days after rain storms, and we keep two Thermocells handy to sit out on our deck with our dogs. Sounds like a commmercial, but honestly, after many years and many sprays and lotions and candles etc  Heck with oily layers of Avon Skin So Soft, or having stinky sprays in your hair when you go to bed each night.   This is the only thing we found that works so well. At first I thought $22 plus $6 for three refills is nuts! But after looking at the cost of our collection of cans of Off, Cutters, citronella candles and Musk-ol, the cost really wasn't all that much.


Each refill lasts about 6 hours. If we are only sitting out for 2 or 3 hours, we can turn ours off, let it cool, slide the pad out and save it in the tinfoil pack and get a lot more time out of one refill.  Dispose the pad carefully. We save the small tinfoil envelope the pads come in and slide the totally used pad back into the foil when done, (it turns white when exhausted) and put in our own trash we bring back home.


PS our friends Sharon and Fred have a lovely back yard and deck they could never sit out on, situated in the woods next to a swamp. They bought the Thermocell and can't believe the difference.

OK, commercial over.  And no, I do not get any kind of compensation from Thermocell.

During the weekend, we took the scooter off the back rack and went for a little ride around the area.  There was another campground we wanted to check out, plus it was such a nice day to cruise the wooded backroads.

After a nice ride, and a nice lunch, it was time to kick back and relax.  Something we are getting VERY good at doing, practicing for the future retirement days.  LOL

The loons were raising their family nearby and calling to each other from time to time.  They would swim past up the way.. and then come back again to swim down the way.  About four or five times a day they took the family out for a paddle.   There is something SO peaceful about hearing the loons on the lake.  Katherine Hepburn in On Golden Pond said it best:  "WHHOOOHOOOOHOOOOOOHOOOOOOOOOOOO" 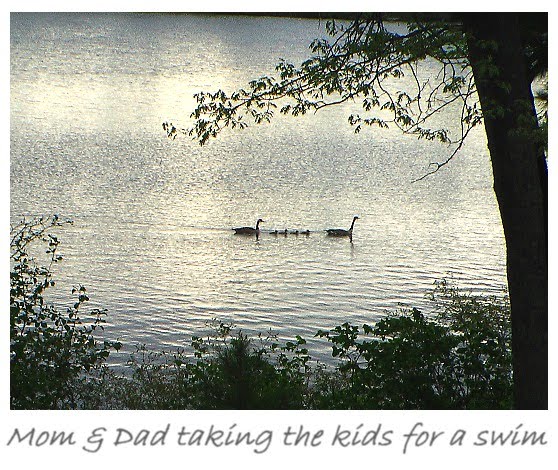 I tend to wake up very early, even on the weekends.  Time to whip out the camera when you see this in your window!

This is another reason why we love our motorhome... we have huge windows all the way around, (very little wall space) and they go from the edge of the overhead cabinets right down to the edges of the furniture.  We have much larger windows on the Safari compared to our Coachmen, our Sierra, or our Winnebago we had.  I like to park where the scene out each window is green green green!   There is something soooo satisfying about pulling up the mini blinds in the early dawn and watching the light grow brighter and brighter on a sun shiney day. Though I get up early, generally I let Steveio sleep in.

Well, that is the end of Part 1 review of this park.  we went back about 6 weeks later with some of our grown kids and camped here again over the Fourth of July.   Will do that review on the next blog post.
Posted by KarenInTheWoods at 9:21 AM