(this is one of series of posts of various campgrounds we have been to over the years... I am going through my files in alphabetical order and posting past camping trips in my blog.... something to do over this long long winter---- sigh)


Runkle Lake is located on the east end of Crystal Falls, Michigan in the Upper Peninsula.  It’s my father’s hometown and many of the Bicigo’s still live there.  The Bicigo Shoe Shop is still functioning on main street, run by some second cousins and great uncles.

The campground is down on the end of main street, across the river and up past the cemetery and on the left.   I took a Google Earth shot to show the campground.  As you drive in past the ball diamond, dump station and tennis courts, the campground is divided into two halves.  The right side is very hilly, rutted with tree roots and you park just about anywhere, willy nilly.   There are only a few water spigots and the power pedestals are kinda catch as you can or run long long cords.    The left side is a newer section with definite sites and logically spaced power pedestals and water hookups. 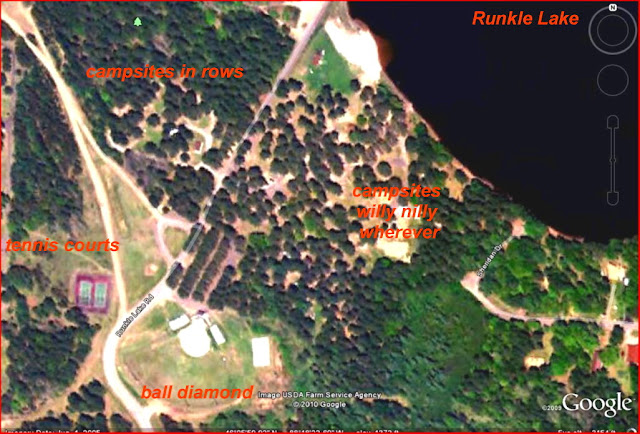 The lake is experiencing an invasion of the milfoil plants, which are choking out other plants and causing real problems with boating and swimming.  The beach area is cleaned out regularly, but the weeds are encroaching and causing a lot of extra work.


These photos are from a combination of a few years worth of camping at the lake.  Our family gathers here twice yearly… once for the Bass Festival and once for the Fungus Fest.  (more on that later)

Here is the crew gathered around my sister’s trailer.  This is her favorite spot as its right next to the horseshoe courts.  At both festivals we attend, the guys join the horseshoe tournaments.  It’s their main priority of coming to this park!  LOL

Here is my Mister Steveio, doing what he does best!

My brother is the beer distributor during the time these photos were taken… he would set up the beer tent and haul back the empties in the back of his pickup truck, as there wasn’t a lot of room to bring in the big beer truck just to unload empty half barrels.

Parked in the willy nilly area of campers, also is my brother’s boat.   This is common for folks to want have boats and campers when camping in the UP of Michigan… so it usually means also having a spouse drive a separate vehicle to tow a boat, in addition to their fifth wheels or travel trailers. But my brother no longer has a spouse!    Steveio had made him the extra hitch on back of his fifth wheel to tow triple…  but it kinda scares him.   This particular time he had me drive his fiver and truck back to town for him after camping was done.

This is the morning after …. poor Beerman Butch and his hangover.   Pass around the Tylenol.   This is kinda common among our crew of beer drinkers.  (I drink wine)

We strung up a hammock and took turns relaxing.   Even the doggers like to swing.

Here is a more recent shot, I think from 2008…  twilight before heading over to the pavilion for dancing to the live music.   Yup, this is our Crew.  LOL  Smokey foreground from the campfire smoke.  Mother hung incicle lights from her motorhome, oh geesh.

We all went over to the pavilion for some dancing.. here are the folks, Ma and Pa Hall.   Then our crew out on the dance floor.  Steveio was doing his best “Frog in the Blender” rendition of dance moves.. heh heh

Steveio and I, the Honeymooners… dancing late into the night!  This was the ubiquitous camera shot  of holding it at arms length and hoping it catches both of us in the lens.

The festivals in the town of Crystal Falls have themes such as Bass Fest, Harvest Fest, Fungus Fest.  They are all just excuses for a PARTY~!

Now here is a little bit I gleaned from this site about the Fungust Fest:

What is a Humungus Fungus?
Several years ago a "humongous fungus" (a gigantic mushroom) was discovered in the Crystal Falls area. It weighs roughly 11 tons and covers 37 acres. This makes it the largest mushroom (fungus) in the world - it's hard to believe this monster mushroom is growing in Michigan and not Texas! Based on the average rate of growth through the soil, the Humongous Fungus is probably more than 1,500 years old.

After the benevolent giant mushroom was discovered it did not take long for the city fathers to decide to share this wonder with the world - hence "The Humungus Fungus Fest" was born.

For three days each August tourists and locals alike celebrate this giant fungus phenomenon with a spectacular celebration. The main event seems to be the making and eating of the HUMUNGUS PIZZA.  The fungus topped pizza is 10 feet by 10 feet! It is the largest mushroom pizza in the world.

There is also an extensive assortment of other activities such as a Buckboard and Horseshoe Tournament; a Tube Float - here's your chance to float down a river on an old tire tube; or register for the Volley Ball or Golf Tournament. If your tastes run to a more sedentary pastime you can begin the day at the Veterans of Foreign Wars' Hall for a Pancake Breakfast then view the Fungus Fest Parade, watch the softball game, or gobble up ice cream at the Ice Cream Social then toddle on over to the Pie Social for home made pies. If you are still able to walk the Salad Luncheon at St. Mark's Church offers tasty culinary selections. At the end of the day pull up a chair and view a fabulous fireworks display - a bang-pow! conclusion for a fabulous event.
Taken from "Humungus Fungus Festival - Crystal Falls, Michigan" by © Maxine Sommers in 2008. Read the entire article by Maxine Sommers.

This particular weekend, I was able to get 3 bushels of cucumbers from a local truck farmer to make dill pickles with.  My sister and my mom love to do pickles, so we hauled all the gear up to make them.  The canning kettle sets on the LP burner stand from our turkey fryers.  The other kettle is the hot pickling brine.

Yup, that’s me.. the Pickling Queen of Oconto County!

(not kidding, a little *brag* here--  at the County Fair,  I won Best in Show for my pickles, and got a ton of great prizes from the Kerr-Ball canning company to boot!)

Mother sat for hours, scrubbing pickles clean before processing.  What a gal….  as children, we helped her many many years canning pickles, saur kraut, tomatoes etc.

And here are the lovely results of our labors… some slices, some whole, some spears….

(don’t ask, our recipe is a prize-winning secret!)

Posted by KarenInTheWoods at 8:53 AM