(this is one of series of posts of various campgrounds we have been to over the years... I am going through my files in alphabetical order and posting past camping trips in my blog.... something to do over this long long winter---- sigh)

This review for Lake Ottawa is going to be in four parts.  This one is from Fourth of July, in 2007.   We were parked in our same special site, number 17.   (same pic from before) 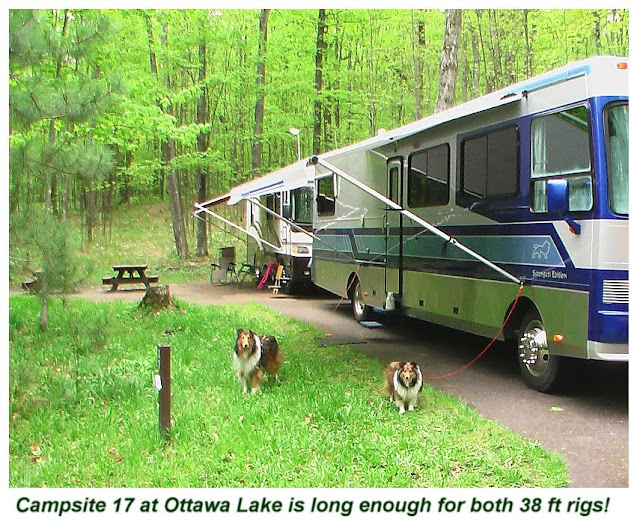 Here are the links for the information on Lake Ottawa:
Lake Ottawa campground information
All of the campgrounds in the Ottawa national forest in this district

This post is the second half of the Memorial Weekend that I posted a few days ago.  Of course the campground filled up fast, so we had to send the folks out early in the week to get our site for us.

Now here is a rant:
This time we had very very noisy folks down a few sites from us with a freaken rattling very very loud contractor's generator that they ran all day and into the evening ... finally turning off at 10 pm   It was NERVE-WRACKING!   We talked to the host about it, and he said there aren't any regulations about generator use, just quiet hours, which they are abiding by.
They had the generator situated in a flat trailer that was parked on the other side of their camper, to deaden the noise for THEM..   but that placement increased the noise for US!  ACK!      We also noticed they had their lights all on in their camper, every available light it seemed, and nobody inside of the camper. All the blinds were up and light up like New York City....   They were all outside by the fire on the other side of the camper.   Why work so hard to charge up the batteries when they are using the power at the same time?   When they turned it off (finally) we all CHEERED and CLAPPED and hooted and hollared in joy.
The next day they fired up again about 9am, and it seemed to echo along the whole ridge of the campsites around us.  So much for early morning peaceful coffee time in the woods!
We noticed the people from that site would fire it up, get in their cars and LEAVE.... with it running while they were gone.  So they didnt have to listen to their own noise, I suppose.   We put a note on their post saying to please only run the generator when necessary, and not to leave it running when they were not present on their campsite.   That got ignored when they came back, the note was gone and the generator was still running full tilt.    They kinda didn't look like the folks we wanted to confront either.
When the rangers finally came through the park that afternoon, we stopped them and talked to them.  They agreed with the host about not being any rules specifically against it, but they would talk to the them.   Well,  the danged thing ran for another few hours till the people got back from another trip to town.  (remember this is a national forest campground, not staffed regularly, just a host)    When the people finally got back, the rangers were already gone for the day, but the host did go talk to them again.   We watched the host walk away and (oh no!)  right over to our site!   Waved HI and told us it was all taken care of .  Great, now they know we were the "complainers" ... ack!      I fear retribution from strange folks, or at least uncomfortable encounters at the beach or in the park.   But the generator stayed off for the rest of the evening.  Thank goodness.
But the very next morning, it was back on again.... arggghhhh!    But today was the kiddie parade through the park, and games at the beach, and free luncheon.  This event was put on the by park rangers and staff.  So now they were present and the generator was off for the rest of the day.  Oh Joy Oh Peace Oh Silence!

Here was the little kiddie parade that came through the park....
the rangers led the way with their truck

Smokey Bear was there with handouts for the kids about campfire safety.

Somehow all my pics of the kiddie parade are missing files!   I have no idea where they went.   All I have is this one from before the parade started.  Two little girls from a neighboring campsite wanted to *borrow* our collie for the parade.... so to dress her up for the event, we added a bandana and some big stickers on each side of her coat!  LOL

My little camping friend Autumn was in the parade too... and later she came to our campsite to do crafts and play with me.   That was more fun than any party she said!

She worked on red, white and blue potholders for her grandfather's camper, her mommy, her daddy and one for me too!   Busy busy busy little lady.....

I have one more camping weekend of Lake Ottawa to post yet, it is from this past summer.....
Posted by KarenInTheWoods at 11:59 AM