Stubborn Doggie and Settling In Back at Home

We decided to head back home on Sunday before the weather turned. We packed up the motorhome and headed south, while still enjoying a pretty sunny day. The clouds were coming and the winds were going to be picking up. Nobody likes to drive a motorhome in high winds, so it's good we got home before noon.

We unloaded the motorhome and Steve did a final winterizing ---again. Even though we were winterized the week before, we de-winterized to go camping at both campgrounds last week. Later on this week I will do reviews of both campgrounds we were at, and post them here.

The last few days haven't gotten much better with the stubborn little dog that we have. Finnegan is still not wanting to eat any dog food. He ate only for one day of the new stuff we bought from the vet, and that was it. Now he turns his nose up at it.

We decided to try to cut out any enticing people food that we've been managing to get into him. Even that changes from day-to-day as to what he wants verses what he doesn't want.

So we thought maybe on yesterday we would do "tough love". Not give him anything at all except the dog food and that was that. He won. He wouldn't eat anything. Even the appetite enhancement pills aren't doing it.

So I gave up and decided today that he was going to eat his regular everyday dog food, moistened with water so it's soft. One piece at a time I put it in his mouth and then I tilt his head back with his chin up in the air until he swallows it. He does so reluctantly, but I can get the entire dish of food into him by patiently giving it to him one piece at a time. At least he gets a full belly that way.

No more people food, no more snacks. Eating only stuff like that is wreaking havoc with his digestive system and we are having to clean up the messes on his fur every time we bring him in from outside.  Long hair doggy butts and diarrhea do not mix, if you get my drift.

So after I fed him today, here's the look he gives me as he gives me a wide berth to the far end of the she shed. I can just imagine what his little brain is saying as he's huddled over there in the corner, giving me that glare. 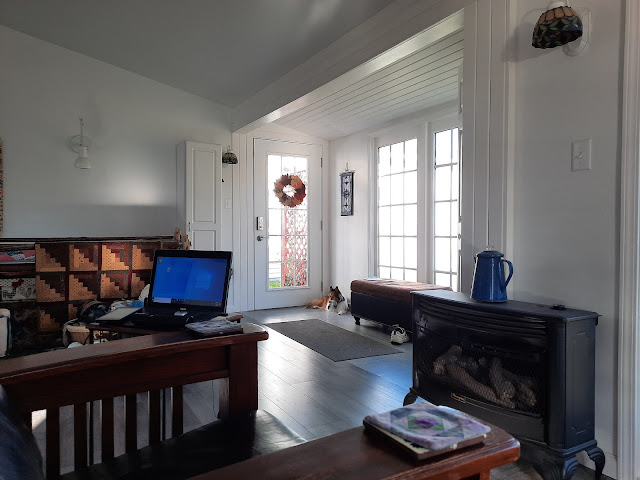 Today was a rainy soaking wet day, and we didn't want to get out or do much of anything. I've been sitting here working on some winter hats that I've been knitting. They have really thick brims with double layers to go over the ears as well as knit with heavy 3 and 4 strands of yarn. Getting ready for this Wisconsin Winter? I gave one to each of the grandkids last week, and the rest of these I will post for sale in my Etsy store on line. 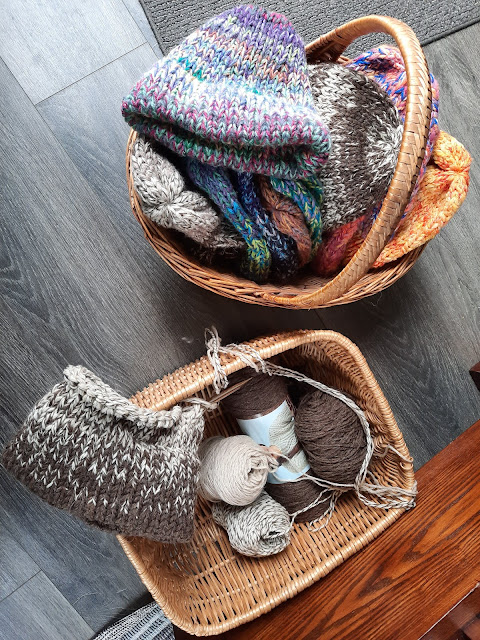 I also tied up and tensioned off the big rug loom to get ready to start another rug. This one's going to be in blues and creams.  I have to make two of them for a lady for an order. Maybe in the next couple days, I'll get started weaving on these, seeing as the weather will keep us indoors.  Now they are predicting winds tonight of 50 mph gusts! 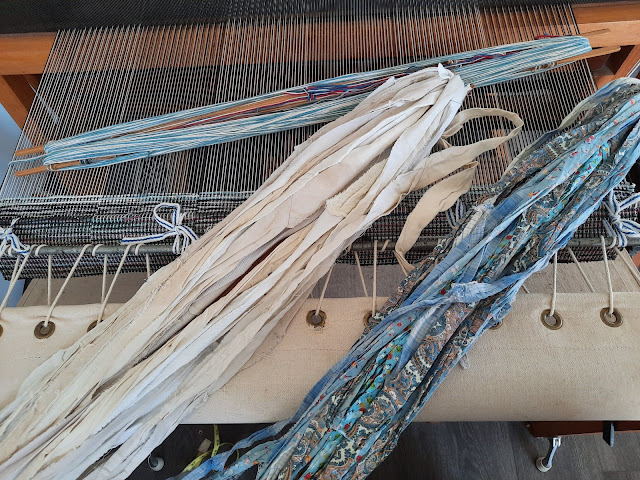 On Monday we managed to get a nice little walk in the back with the dogs before the weather turned. I took this picture while we were quite a ways out in the big backyard, and that is little Binney way back there. 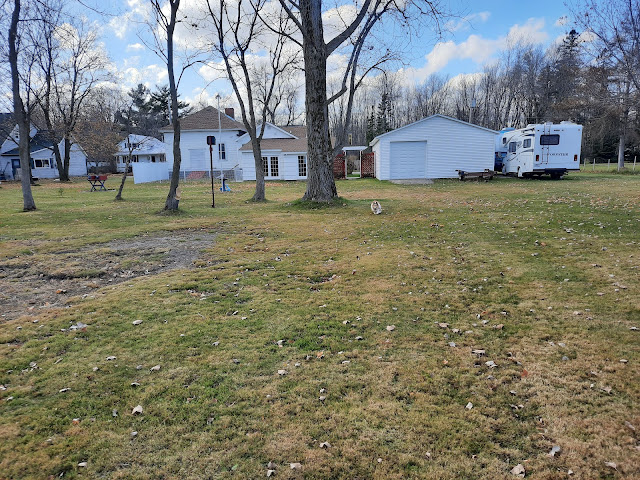 For some reason she didn't want to come with us and she held back and looked like a stubborn little stinker. Maybe she's jealous that we're giving so much attention to Finnegan lately?
He seems to have plenty of energy and running around and just full of the dickens, but we know he's lost weight over the last few weeks. We need to get more weight back on him and I think this is the only way we'll be to make him eat his dog food. Whether he likes it or not. 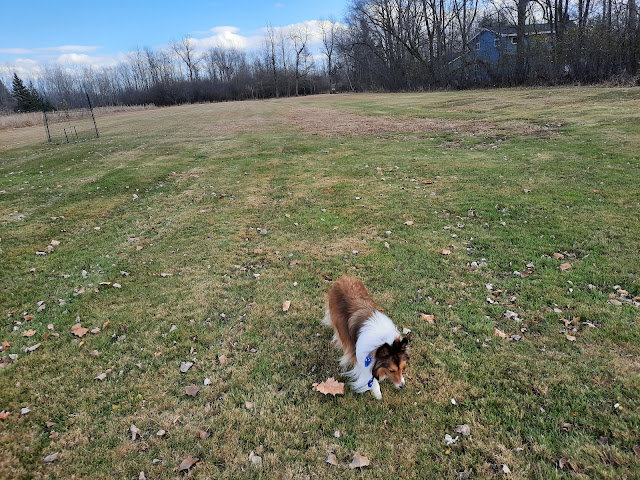 Well the rain poured down all afternoon, I took a little nap. When I woke up I had it in my mind to get a few things done in the kitchen. With the rain beating against the window outside, it felt cozy and warm indoors.  I am thankful we are home, safe, healthy and warm. 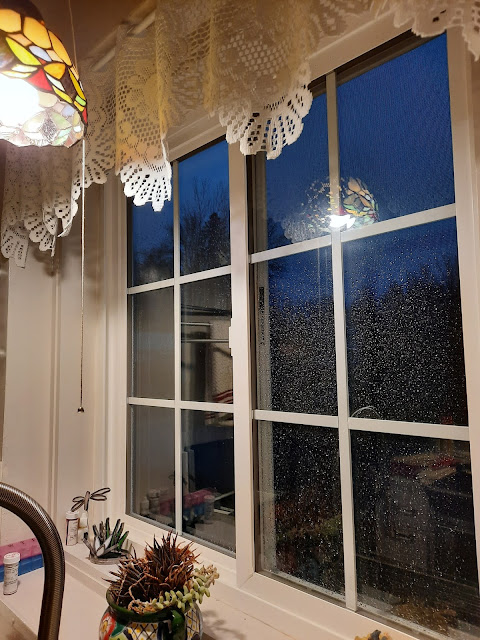 Using my new sink workstation area in the kitchen I decided to peel up some Granny Smith apples for an apple pie. I have this handy-dandy little apple peeler corer slicer machine that sticks to the countertop with a big suction cup base.  It makes it so easy to peel up a batch of apples for a pie.  Just minutes and the task is done. 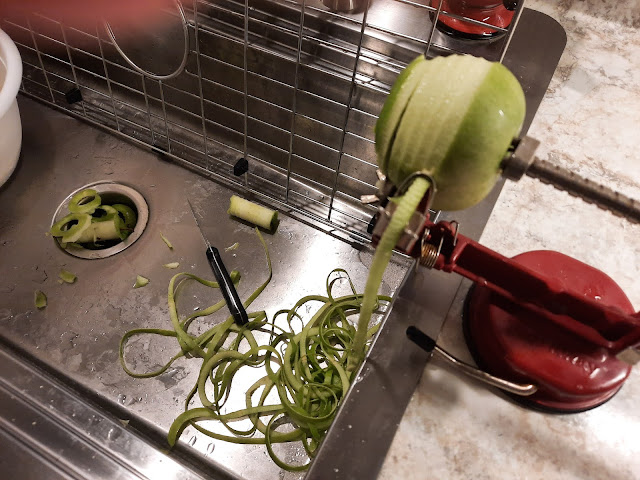 I love this new setup with my workstation sink. It really is the Sink Of My Dreams and I am so glad we got it installed for my birthday.  I can peel the apples and the peelings and the cores go right into the sink. 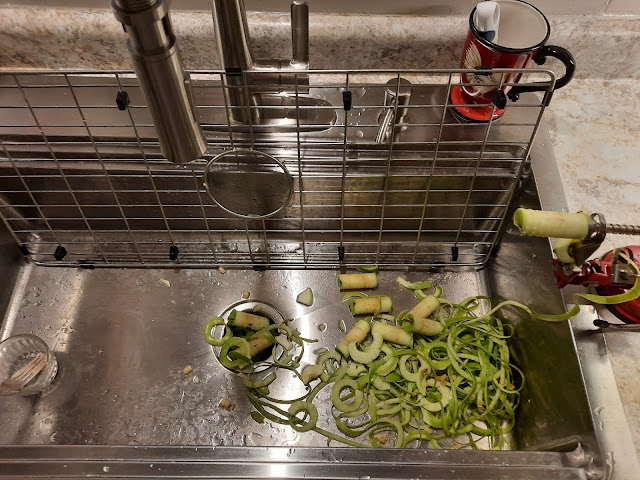 With my super duper bad ass garbage disposal that Steve installed, the cores and -peelings are gone in no time flat! There we go, all done and ready for the next project 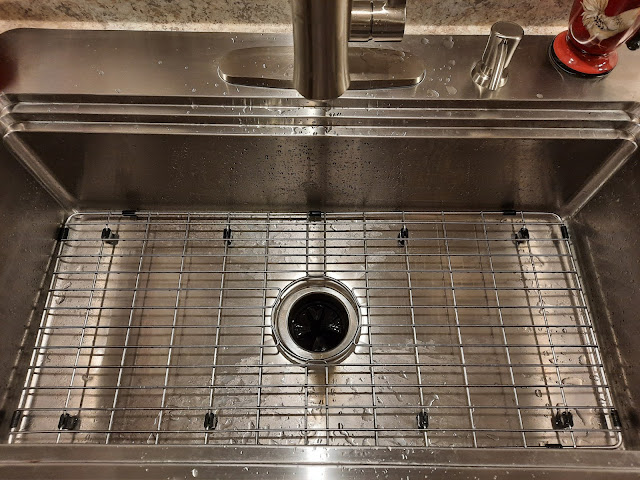 Some people might tell me to feed the peelings out to the deer. (My sister told me that, too.) But we don't want to encourage them any more than we already do. Those danged deer have already chewed off all the tops of my hydrangea bushes. That means I won't get any blossoms next year! Again! Also they gnawed down Steve's burning bush to almost half it's summer height. We had to surround that one with the fence now. Next year I'm going to have to do the same thing with my hydrangeas. It's funny how they only like certain shrubs and not others. Some stuff they don't even touch.  (like our stubborn dog?)
In no time I had the pie put together and ready to stick into the oven. I cheated with store bought Pillsbury crusts.   Here's the pie ready to go into the oven. In about 45 to 50 minutes it will be ready for dessert tonight. ... 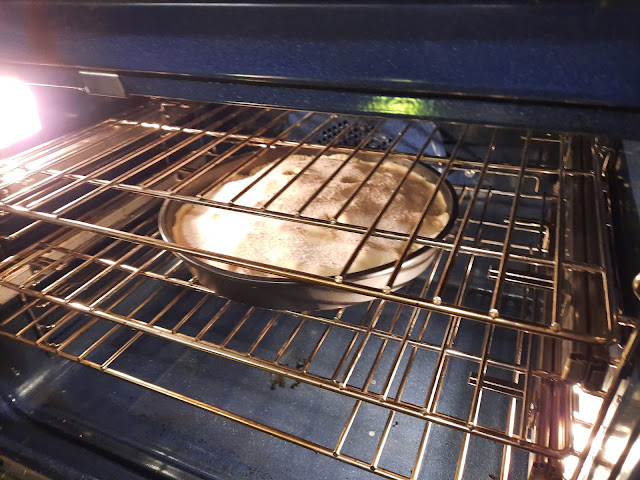 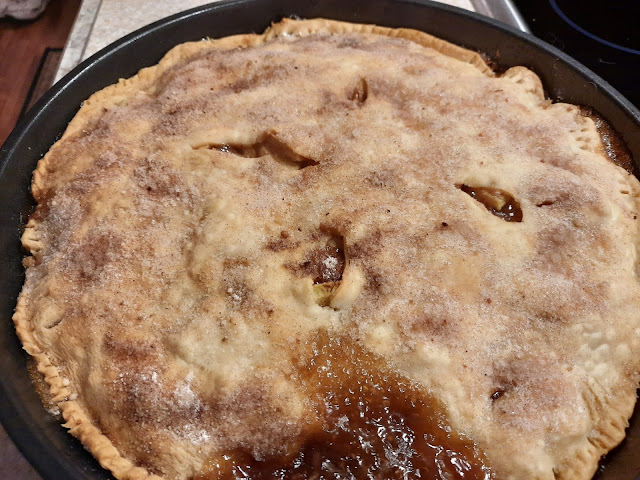 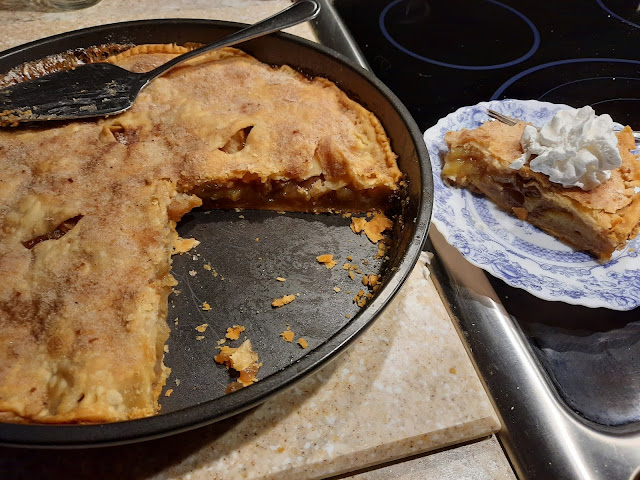 with garlic knots for supper tonight 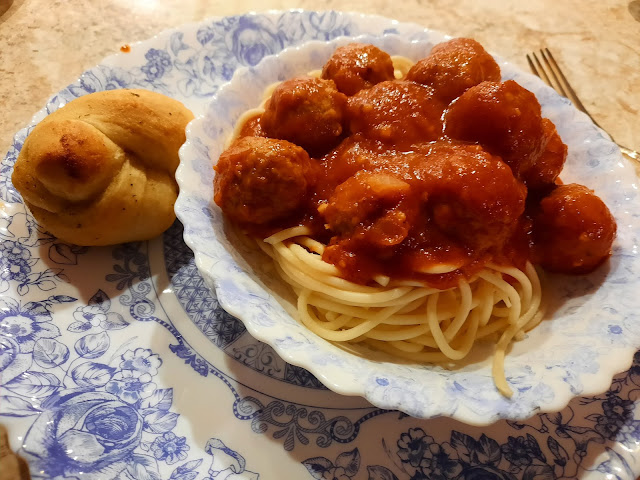 The winds are picking up and the rain is pouring down, with some thunderboomers thrown in for good measure.  I think we will curl up with some cribbage games and maybe a movie on tv.  No need to go out, and no place to go.
That is enough cooking and baking stuff in this post.  Now I will get this blog posted and work on two campground reviews to post during the next few days.  Those kind of posts go over good with my RV readers. Then if I get the rug going on the loom, my fiber readers will be happy too.
Thank you everyone for reading along with my blog... Did you know I have over 2 million views now?  I am glad that someone finds whatever I write interesting enough to come back again and again.

Posted by KarenInTheWoods at 6:18 PM