Stay At Home Day and a New Toilet!

The weather report last night was full of gloom and doom and ominous bad weather predicted. But this morning, we woke up with just a slight dusting of snow, and a little drizzly rain out there. It wasn't nearly as bad as they said it was going to be. The temps are down in the low 30s, but not frozen, so we are okay. 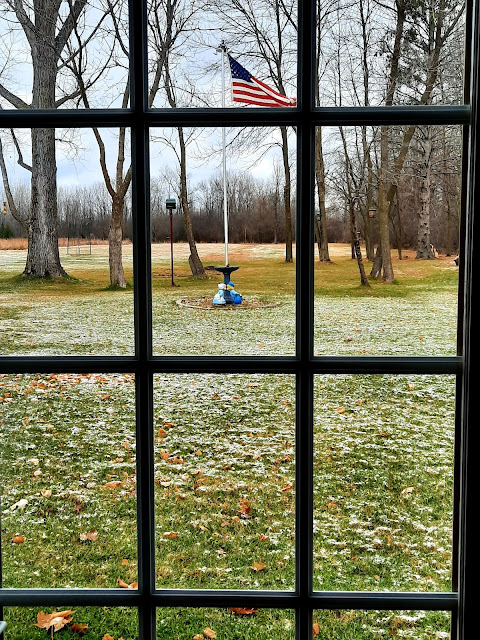 All in all, we are just going to stay in and stay safe. The covid-19 numbers in Wisconsin have increased so high, higher than ever before, that we just don't want to chance going out and about.
We haven't been to the hair stylist in over 9 months. So it's up to me to chop down Steve's wild unmanageable curls and give him a semblance of being somewhat coifed. 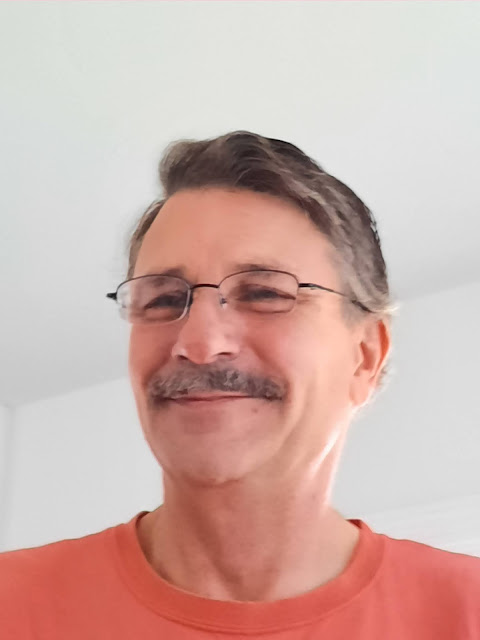 I guess I didn't do too bad of a job, he is smiling so I think he likes it. It may not be as good as a hairdresser as Kelly, but we can manage and stay home by my doing it for him.
~~~~~~~~

Our days are now revolving around two and three times forcing this stubborn little dog to eat his moistened dog food, hand-fed one piece at a time. I have to put it in his mouth and then tilt his chin upwards until he swallows. Once we get enough of his regular dog food into him, then we top him off with a few tidbits of people food that he really enjoys. Yesterday it was tiny bits of bratwurst and flakes of apple pie crust. The day before it was a small pizza crust and bits of windmill cookies. He seems to be just fine with eating people food. But it's the dog food that we HAVE to get into him to build him back up and sustain him---- as well as his outgoing back-end production. People food is not good for that.
We have tried everything to get him to eat dog food on his own: 8 different types of dog foods, canned, wet, pouch and dry.  We have tried cat food, canned, shreds, pouch and even pouched people tuna.  He only ate the tuna.  Figures.  We have tried soup broth over the foods, gravy over the foods, and warming things up in the microwave.
Want to know what he eats with delight?  FROZEN PEAS!!! Yes, I roll them across the floor one at a time, and loves stalking them and gobbling them up as fast as they come towards him.  LOL
Sooooo --- here he is with a full belly after I force fed him his dog food this morning. He is avoiding me and staying over in the corner as far away from me as he can get. Takes about an hour for his resentment to wear off, and then he's back cuddling up on my lap again. 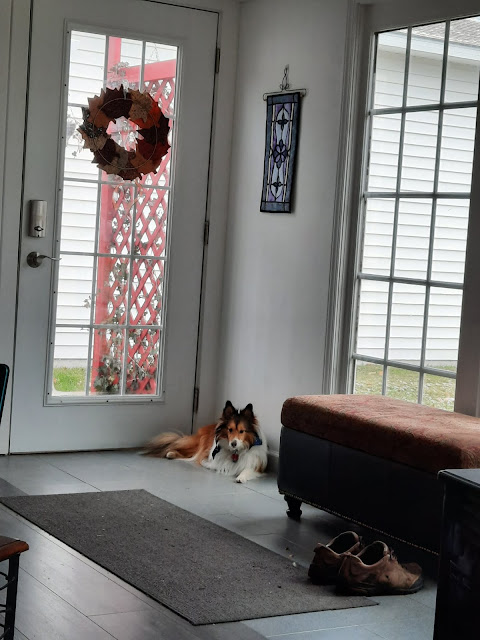 He is not too stressed or upset or sick in any other way that we can tell. The vet checked him all over and said it's just in his head. So we will continue to force him to eat his dog food until we get a little more weight on him. He lost wayyy too much weight over the last few weeks.  Then we might try a couple more "tough love" days where he will be forced to eat out of his own dish or go without.
Here is Binney, all relaxed and in solidarity with Finnegan, right by his side. Both are taking a nap now because they both have full bellies. She is more than happy to eat up whatever he leaves behind! 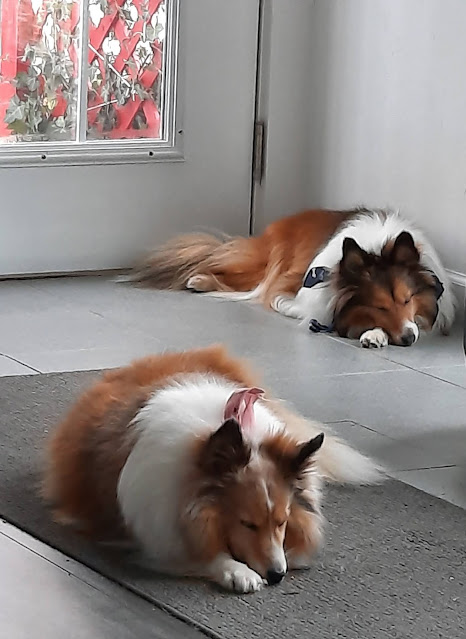 On edit, we just had lunch.  He ate pieces of tomatoes, scraps of the edges of ham lunchmeat and some pieces of bread crust.  Goof ball!  That should hold him over until supper.
~~~~~~~~~

Today's project was a little different. For the last few months we have contemplated the idea of replacing the toilet in our master bathroom. The one that came with the house is a little shorter and has a round bowl. Steve prefers the taller one with the elongated bowl like what we had put in our half bath. It's the tall Eljer Diplomat.  We watched and waited for it to go on sale. Finally it was on sale, plus the 11% rebate at Menards. We placed our order and did a curbside pickup to get it during the sale price.  We don't go into the store, and we let the items sit for 3 days in our garage before we bring anything into the house (and liberally wash our hands after handling them). Also I ordered a variety of other dog foods and my last section of undercounter lighting for in our kitchen.
Today was the day to put the toilet into place. Steve unboxed and carried it in a section at a time from the garage. That way each piece could warm up and come to room temperature before he needed to assemble it. Of course, it's perfectly normal to have a disassembled toilet in the middle of my she shed, right? 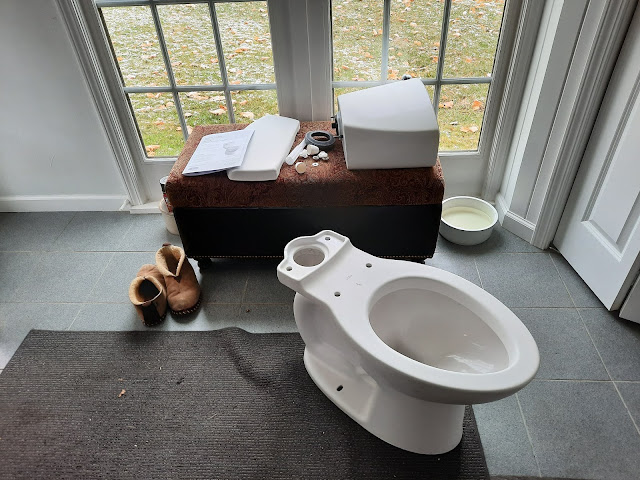 Next step was to gather his tools and get to work.  He disassembled the old toilet and removed all of the water, so it could later be carried out of the way. Now it's time to put together all of the new pieces before installing it to the floor. 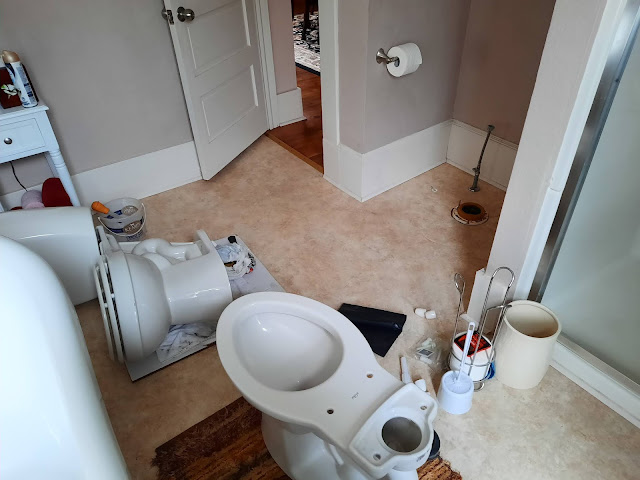 Once we had the main sections assembled together, it was time to push it down on the wax ring and seal it to the floor. Steve likes using the wax rings with the plastic flange, to make sure he has a really good connection and there's never the possibility of a leak. They cost a little bit more than the plain old wax rings, but it's worth it. 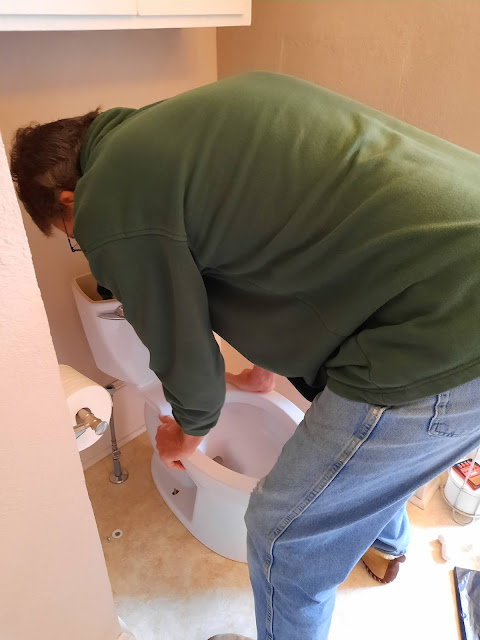 Now it was time to do the connection of the flange bolts on the bottom and connect up the cold water feed line behind the toilet. Steve has done these so many times he could probably do it with his eyes closed. Maybe they are closed in this picture? It's hard to tell. 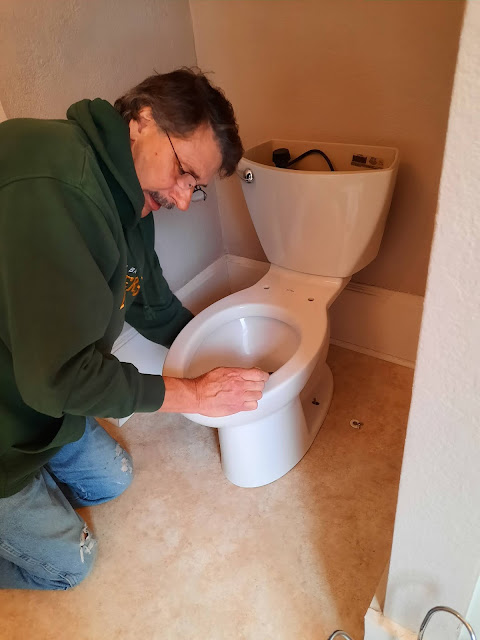 And there we have it! (Steve's favorite saying). A nice new toilet with the taller seat and the elongated bowl. Incidentally, the toilet comes with a cheaper plastic seat. At the same time, we had ordered up a better higher-quality wooden seat that lasts longer and is more substantial. Also more comfortable to sit on. As we get older, some of these things are pretty important to us. 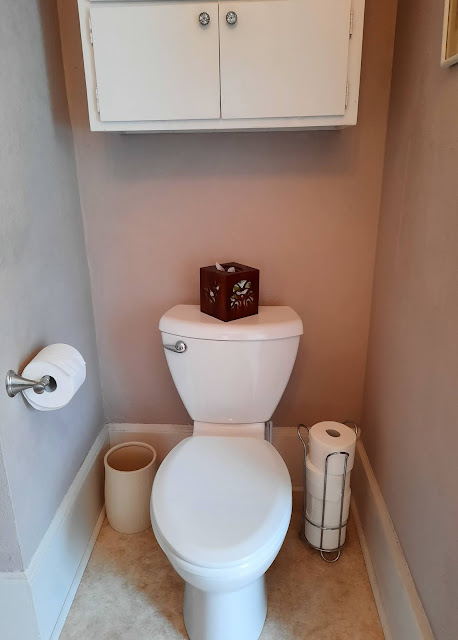 After adjusting the water level to the appropriate amount that we feel is good, Steve let me have the honor of doing the first flush! Perfection!

I guess it's kind of funny, now that we are retired, that this is the highlight of our day. Yes, replacing our toilet. But it's just one more of those things that if we do it now, then we are happy with the results and it will last for a long time to come.

I don't know what the rest of the day will bring, but it will remain kind of cloudy and damp and drizzly, I believe. Saturday and Sunday are going to be a mix of rain, sleet and snow. That's okay, we aren't going anywhere anyhow. We are going to isolate ourselves again, just like we did in the spring.

Now if we can just get this goofy dog back on track with his meals, there will be less stress. 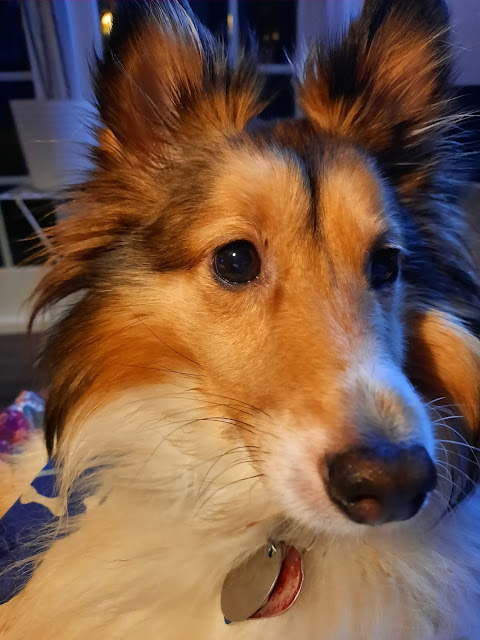 We will see what tomorrow will bring.

Posted by KarenInTheWoods at 1:22 PM