Oh boy, do we ever have exciting nightlife around here.

Since installing the backyard lights on top of our flag pole, the dogs really enjoy watching the critters come into the backyard at night after dark. They wait and wait, and watch and watch, until something comes into the yard that they can bark furiously at. It's their job to protect us, you know?

Mostly it's deer. We tell Finney and Binney that they are "big brown doggies". They wait and see them come into the orb of illuminated backyard lawn. It is quite exciting for them, as they perch by the ottoman and let those "Intruders" know that they don't belong in our yard! 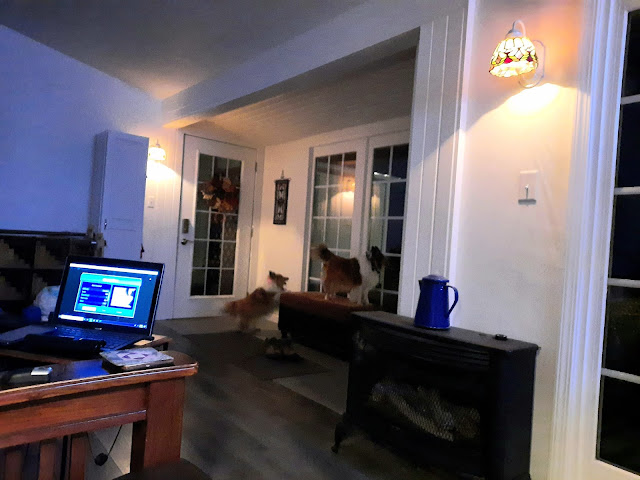 Last night they got an extra special surprise. Waddling along underneath the bird feeders was a big huge opossum! It was snuffling around and hung out for only about 5 minutes. The barking of the dogs convinced it that it was time to get along on it's way and get back into the dark depths of the woods. It would be safer there. 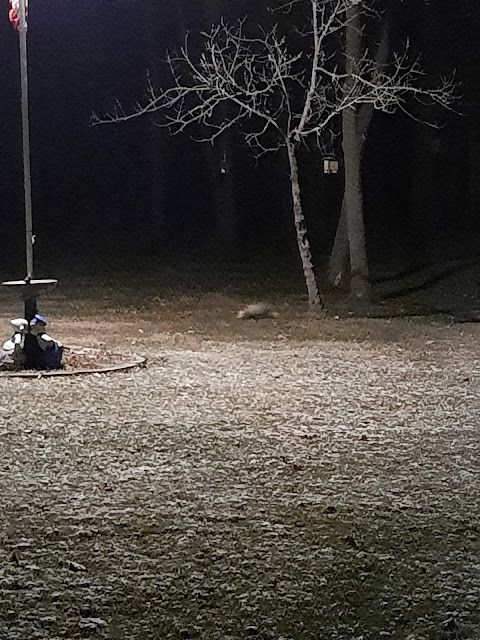 ~~~~~~~~
I worked on a new project last night. It was a little one, but it's something that I've wanted to do. Ever since we replaced the backsplash with new beadboard, we discovered that there was a third under counter light to the far left near the microwave. All of the while, living here over the last 18 months, we thought there were only two under counter lights to the left and right of the sink. Well, with the additional third light, we needed a fourth one now to balance out the other side. Especially to illuminate our big red chicken! It is a wooden nesting hen that I use for grandchildren treats.
We dismantled one of the lights to read the brand name and find out where it was purchased from. These lights are connected one to another for the power so you don't have to have four separate plugins.  So we wanted the same brand and connection.
I found them at online at Menards and ordered one up. They were a little pricey for my taste. They were $25 for a small 12-inch one. But I needed to keep the same type so they could connect together.  I guess it was a worthwhile investment. 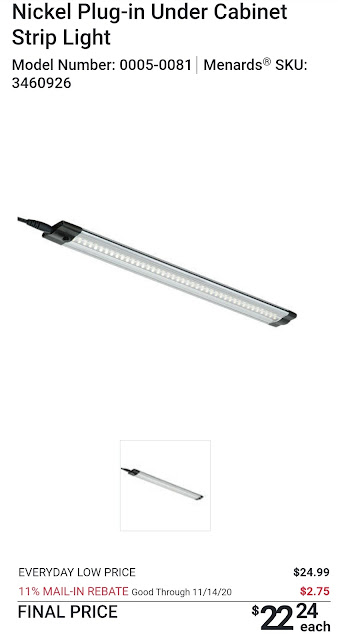 As I was working on the lights, Steve grabbed my cell phone and took a picture of me. See? I actually DO some of these projects myself! I even have my own tools. Usually it's me taking the pictures, even when I'm helping Steve with a project. This time it was all mine. 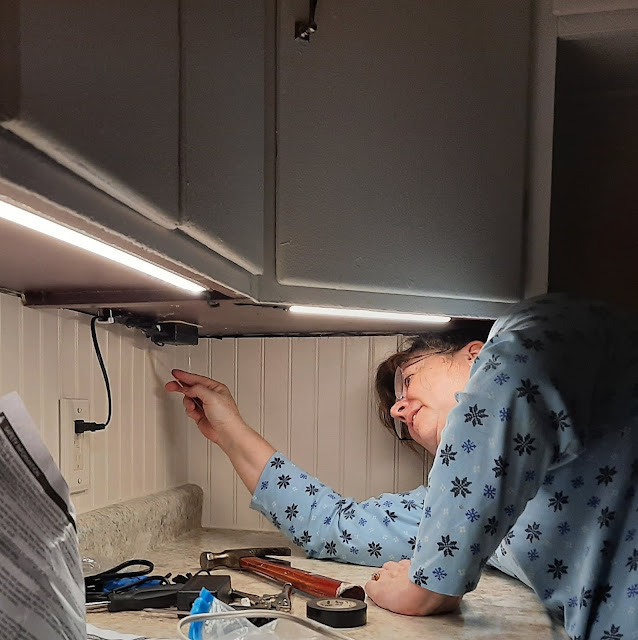 It didn't take a lot to mount it. Just two screws and 2 little clips and make all the proper connections. Then I had to tuck away all of the wires and firmly attach them so they would not be seen hanging down.
The previous owner had used a staple gun with metal staples on the wires! That is a dangerous no no. I used some proper plastic wire staple clips to secure the wires safely. I removed all of his old metal staples and replaced those as well. 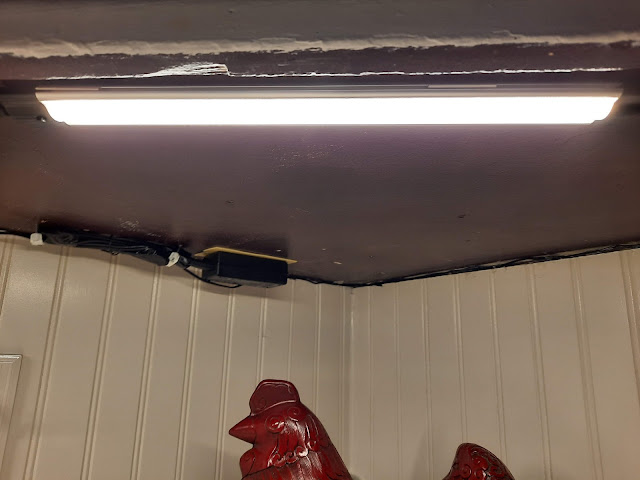 Now look at that! The rest of that area of the countertop is illuminated, especially the area right over the Big Red Chicken! 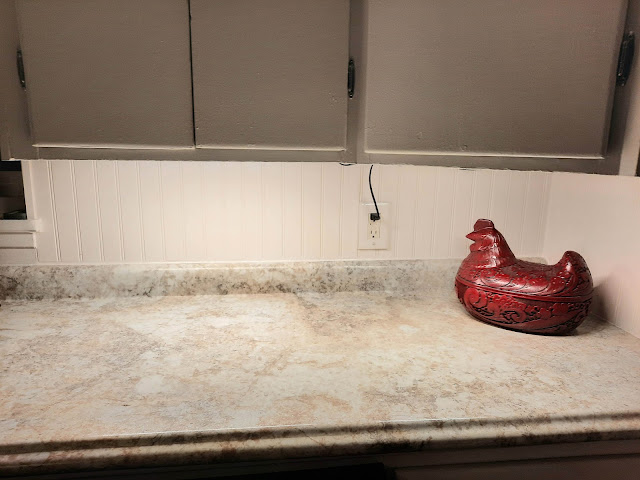 I just love that the entire countertop workspace area

is illuminated with these warm toned LED lights. 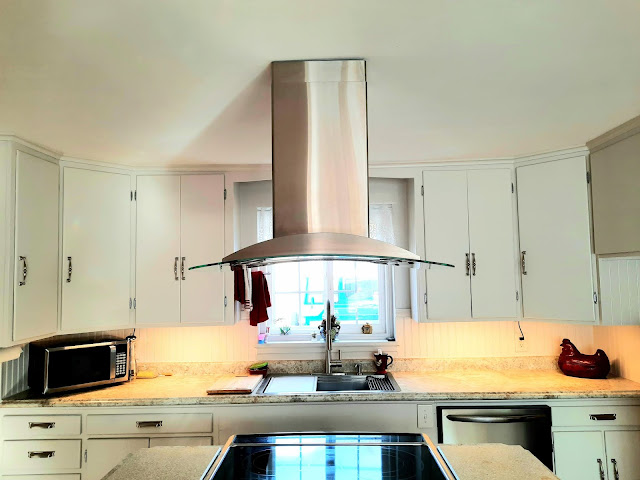 ~~~~~~~
My feeding efforts with the stubborn little dog are getting better and better. Now that I'm getting more dog food into him, his outside bathroom "situation" has returned to normal. Even though he does not care for the dog food, he is being forced to eat at one piece at a time.
Here's what happens if I try to give him a bowl: 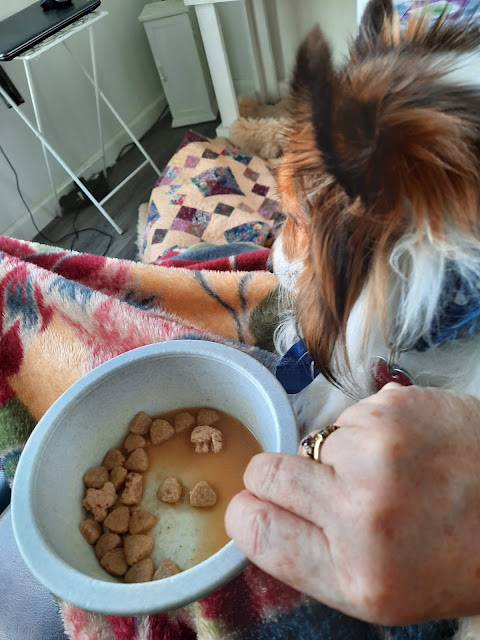 He clearly lets us know what he thinks of softened dog food in his dish. He would prefer people food! 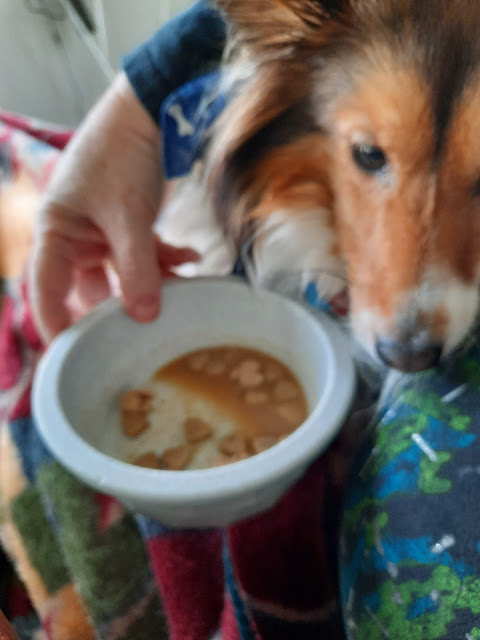 Instead, I open his mouth up a little bit and tilt his nose upwards. I put one softened piece of dog food at a time in his mouth and let him close and swallow. Sometimes I rub his throat to make him gulp.  I'm not forcing him with a clamped shut mouth, but it's enough of a tilt back to make sure that the food goes in---- whether he likes it or not. 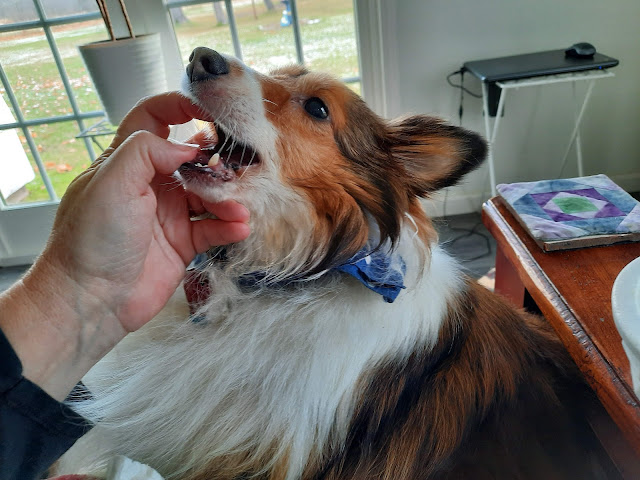 Afterwards, he is not happy with me, but the food is in his belly and that's what matters. Then we treat him with a couple little pieces of people food once it's all done. Hoping to entice him and get him to figure out that if he eats his dog food, then he gets a treat. 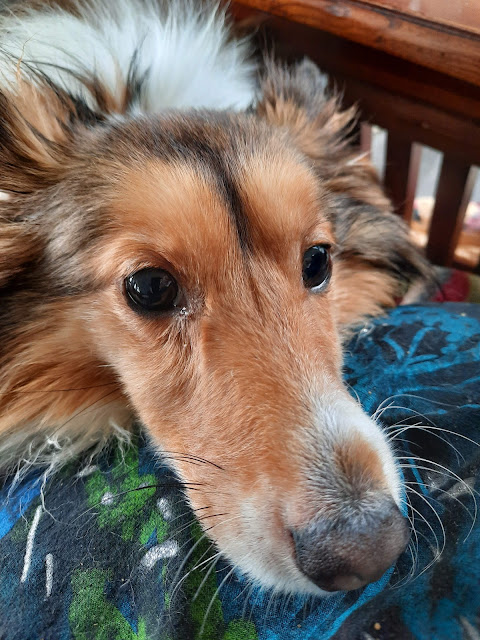 ~~~~~~~
Well, we did another interesting thing today. Remember the toilet that we removed yesterday?
Well, we took our toilet for a RIDE today!
We planned to do a curbside drop-off at the Habitat for Humanity's ReStore in Marinette. We carefully checked their hours for dropping off donations, Steve loaded up the toilet, and off we went. We arrived there ready to unload the toilet and they informed us that they do NOT accept toilets!
LOL ....
So we took the toilet for a 42 mile round-trip ride in our Saturn!
Actually, we had a drive-thru pharmacy pick up at the nearby Walmart at the same time, so it really wasn't a wasted trip.
When we got home, we unloaded it and set it next to the road with a sign on it. Then on Facebook Marketplace, we offered it to anyone who would like to pick it up roadside, for free. First come first serve. 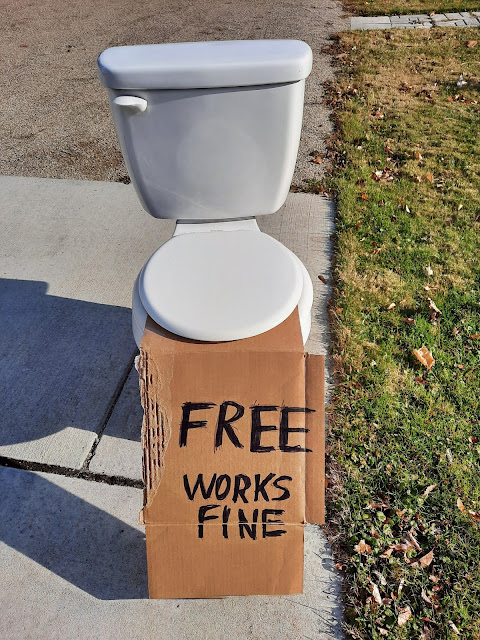 We will see how long it takes for someone to come and pick it up.

Posted by KarenInTheWoods at 1:05 PM