While we are camping, we are still struggling with getting Finnegan to eat.  Since his infected tooth, and subsequent extraction, he has not wanted to eat much of any thing, even people food.  He was drinking water okay,  but just was shaking anytime we tried to get him to eat. We can't get him to eat unless we soften his hard kibble... and kinda shove one mushy piece at a time in his mouth, tilting his chin back until he swallows!

He will nibble at a bit of this or that of people food on his own, but not enough to sustain him.  And never the same thing twice.  We are stumped.

Thursday morning, two times he was upchucking yellow bile from his empty stomach. We were 77 miles from the vet, but they said we could bring him over there in 2 hours.

So we packed up the motorhome and got road worthy in 10 minutes flat. I drove ahead in the Saturn with little Finnegan while Steve followed in the motorhome at a slower pace.  I drove to the vet,  and he drove home to wait.

Poor Finnegan was not happy to be back at the vet office,  but they took him right in while I waited in the car.  They wanted to check the condition of the gums at the 3 extraction sites, and all was good and healing fine. Whew!

They checked him all over and did some new tests.  All is good. He sniffed and ate some choice morsals of their food samples!!!

Sooooooo they determined perhaps this finicky little guy just might too smart for us!!!!

He is just being picky,  and is able to crunch on hard pieces of their kibble!!!  They said he is probably associating the flavor of his regular food with the pain of the teeth,  and of us forcing him to eat.

They gave us some appetite enhancers pills to make him hungrier...and they sent us home with four sample bags of various types to see which he liked best.  I drove the 13 miles back home to where Steve was waiting with the motorhome parked in the driveway.

We set out four dishes of food samples, and he ate one dish clean!!!

Although our campsite was paid for another night,  it was getting too late to run back to the vet for a bag of that food,  so we decided to sleep at home,  and leave in the morning to go camping again.

Here he is
dosing peacefully
on my lap
with a full belly! 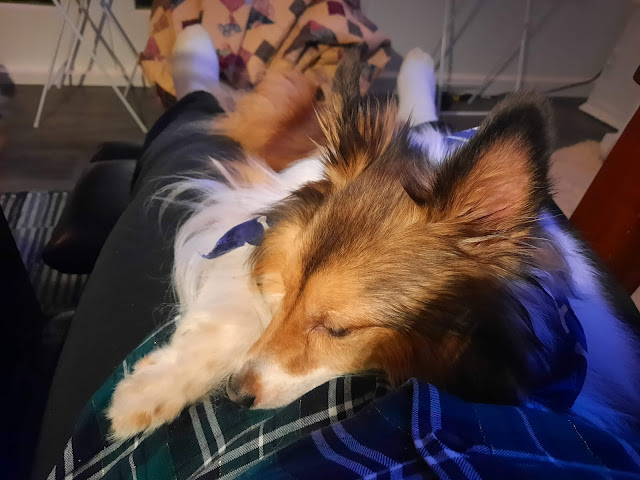 He pranced around the house,  like he was the King! He watched for his deer out back,  perched on his ottoman. You would never had known he was sick!!! 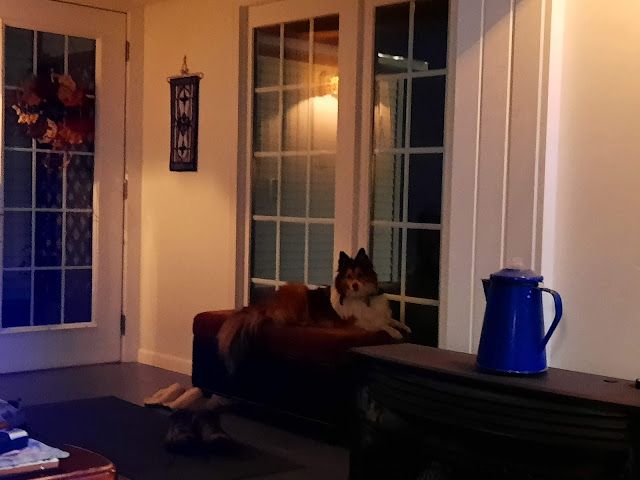 As soon as the vets office opened at 9 am,  we drove up and got an 8 pound bag of the Science Diet Prescription Digestive Care Food...ack... $30.00!!!! Let's hope he gets over this pickiness and eats better soon.  Then we can transition him back to his regular Purina Pro Plan Chicken and Rice.
We decided to not drive the 90+miles back to the campground we were at by Lake Emily in Florence County.  Instead we only went 40 miles,  just over the border in the Upper Peninsula of Michigan.  This is Kleinke Park, in the Menominee County Park system. We have been here many times before,  so we decided to finish our the last few days of wonderful weather camping here.
We pulled in and there was only one other camper in the park.  The price is reduced from $21 down to $15 a night because the water is off and the bathrooms/ showers are locked up.  We chose a beach side site. It was a gorgeous day,  with temps up in the 60's. 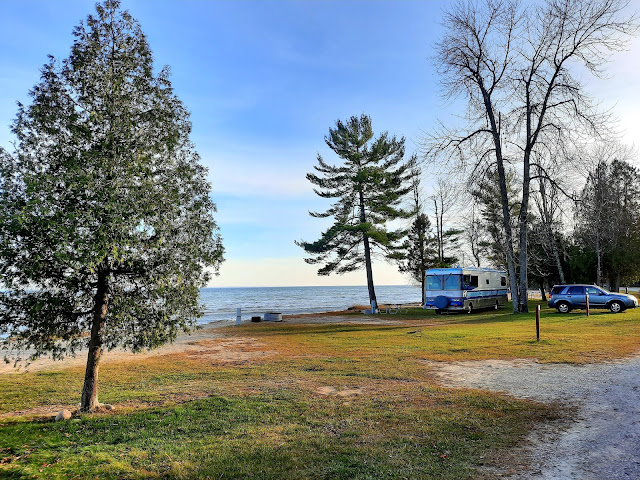 We took a walk along the beach.  There were 15-20 Canadian geese hanging out,  confused by the warm weather.  Should they go South? Should they stay here up North? 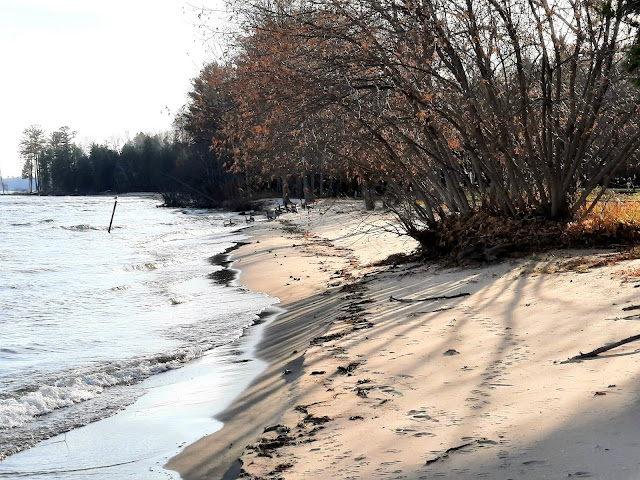 With nobody else around on either side of us, we were able to pull the motor home in crossways, and enjoy the view from all of the side windows. We have seen other people park this way on these sites in the past.  But.... If there had been other people camped on either side of us this would have been an awkward position, also we would not have been able to drive back out again. 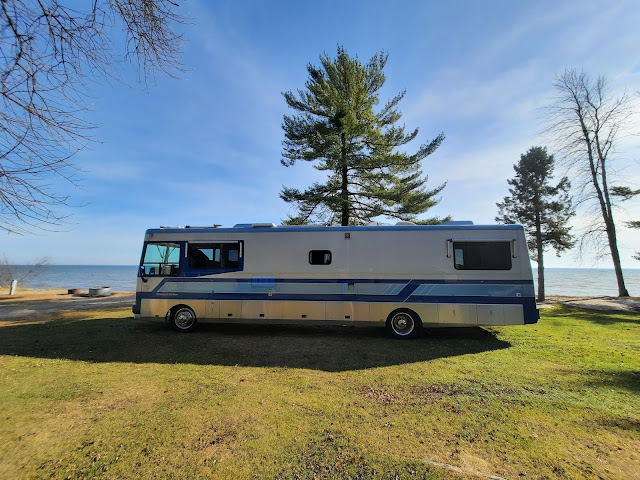 It was nice to be able to park this close to the water and the beach,  but still remain on firm ground. The crashing waves and smell of the fresh air was invigorating. 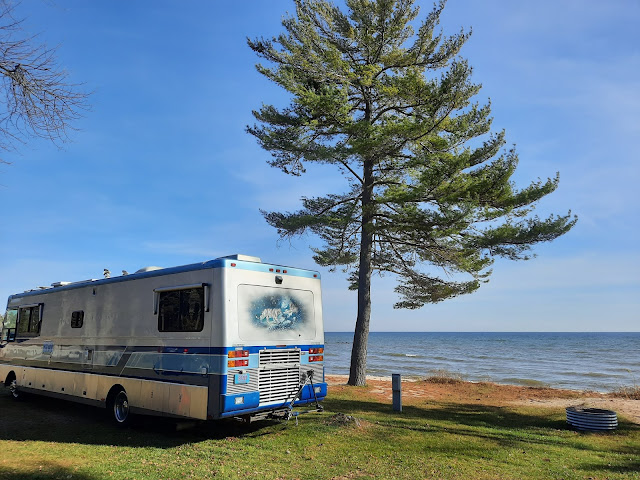 We brought along a load of firewood because we knew there wouldn't be any firewood sales in the park. But with the wind blowing the way it was, we figured maybe we wouldn't be filling up the fire pit after all. What a view while sitting in our lawn chairs next to the empty fire pit. Looking out over the beautiful blue waters of Green Bay, where it leads out into Lake Michigan. 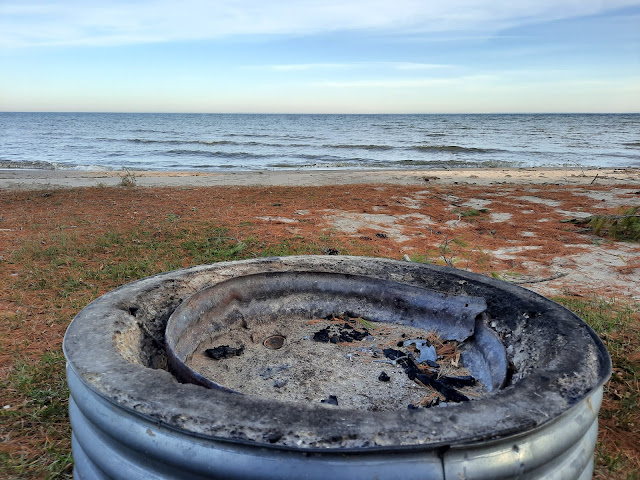 I saw this beautiful weed in the sand, tinged with red from nights of frost during the last few weeks. 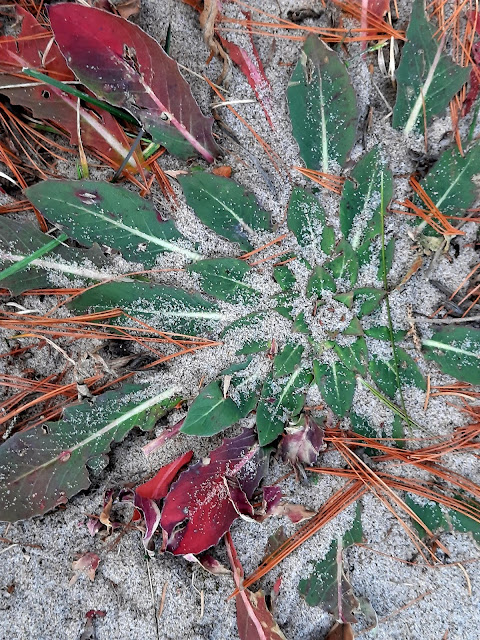 I will do a separate Campground review post on the particulars of the campground. This photo is just to show you how nice and far apart we were from the other camper. This is a wonderful Park that allows dogs on the beach, only has about 30 or so campsites, and is a great getaway within 40 miles of our home. 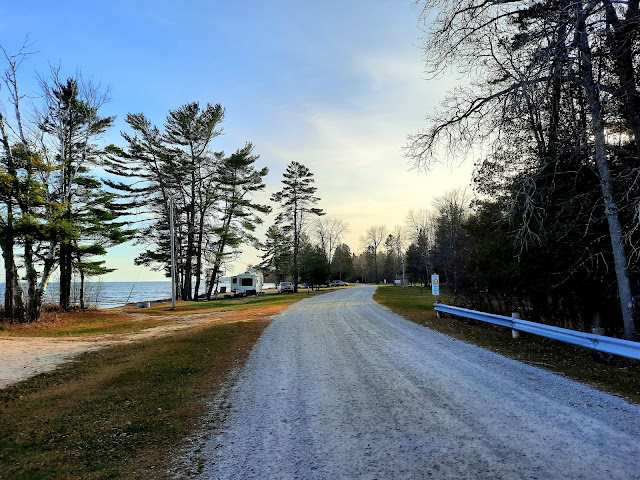 We walked the dogs over along in the picnic area. It's a wonderful soft bed of fallen pine needles with picnic tables and grills scattered throughout.  Nobody was picnicking on Friday but there were a couple cars over there on Saturday. 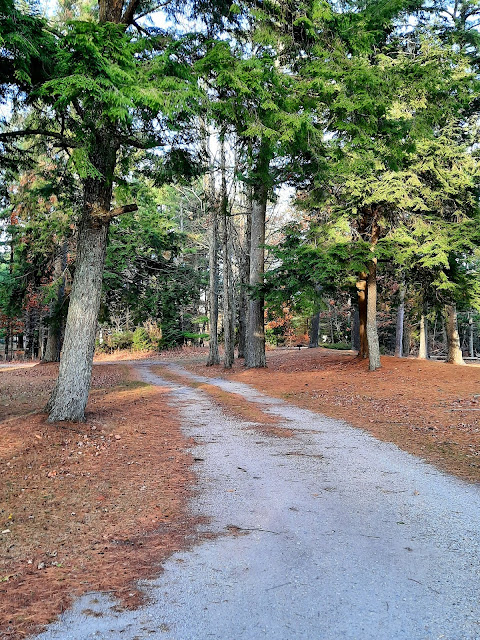 Our grandkids have camped here a couple times and really enjoy this little creek as it flows out amongst the sand dunes into the bay. They caught little tadpole frogs in here, saw baby turtles, and enjoyed wading around looking for natural treasures. It's a little cold for wading today. 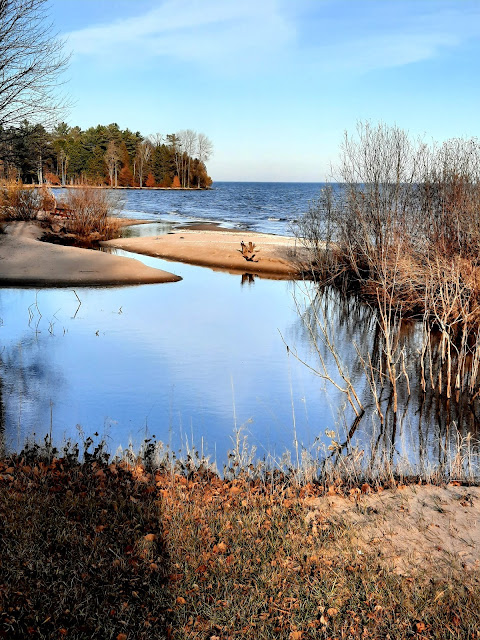 The waves were rolling in,  and it was a bit windier as the day wore on.  This is up the bay a little ways north of the park.  The fall colors are almost done,  with most of the leaves on the ground. 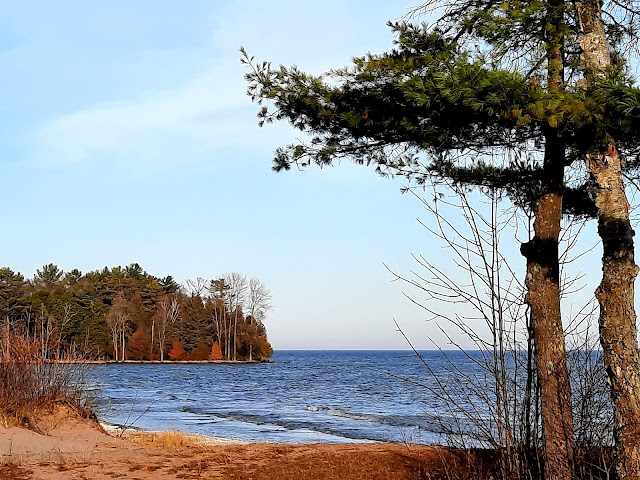 This is the view out of the windows is the motorhome.  Now you can see why we wanted to park sideways.  Ahhhhh----- 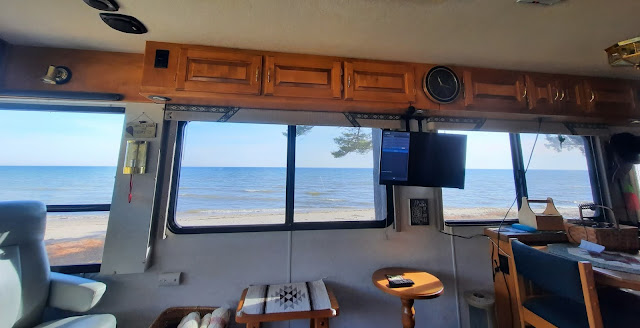 We had a cozy evening, played some cribbage and yahtzee and watched a movie.  It was comfy and warm, but we did have the furnace kick in a few times.
After a quiet peaceful sleep,  we woke up to the glowing sunshine as it rose above the water.  The bright gold light was filtering into the bedroom between the mini blinds.  We opened them up to this great view. 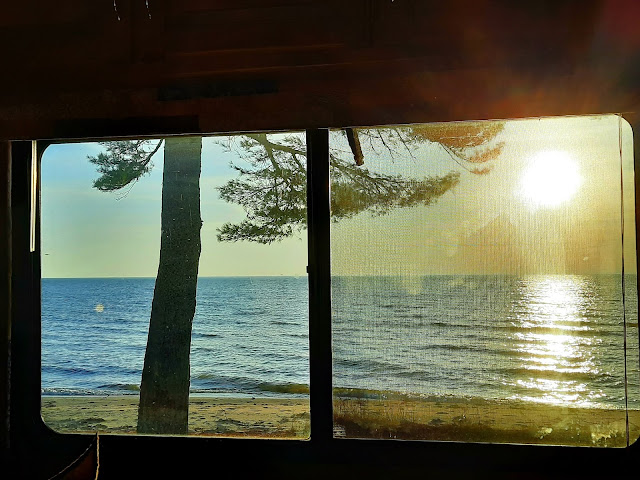 With a cup of fresh coffee in my hands,

This is how we greeted the day. 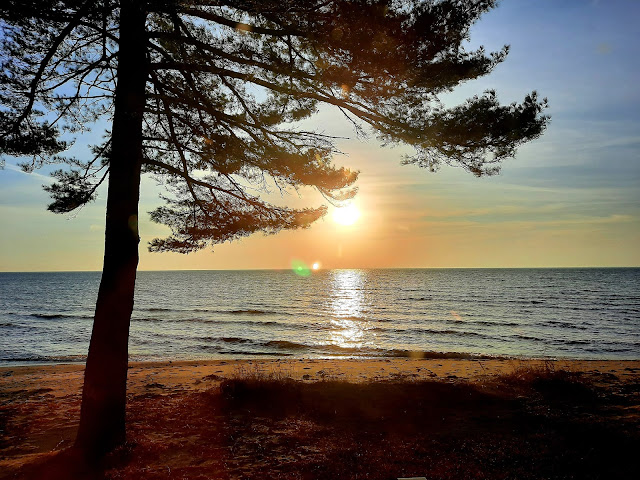 That sassy little dog decided he only wanted to eat a handful of his new food this morning.  Then he turned up his nose, and refused any more.

At lunch,  we made shredded chicken tacos,  and he was more than happy to eat some chicken meat! That stinker!! For supper,  he turned his nose up again at the new food.  Yup, that $30 bag. Arrgghh.  He had lost too much weight over the last few weeks to do "tough love" and starve him into eating.  But we gave in, and fed him a few bites of our own supper for now.

The trouble with long haired dogs who are eating people food is evident with needing baths from upset stomachs of too rich foods. Stinky long haired butts need baths every time they go. Ugh. 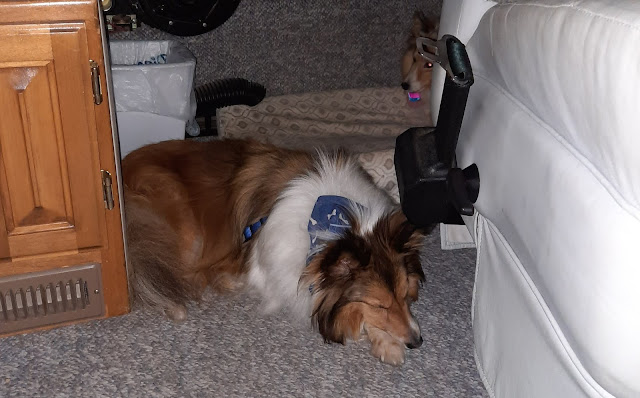 Gotta get more kibble into this guy.