We checked the weather maps, and it was going to be beautiful for the next 4 or 5 days in Wisconsin. It's hard to believe we are having temperatures up in the high 60s and even into the low 70s. This is unbelievable weather for November. Remember, we've already had snow this year.

Steve and I decided to load up the motorhome and head out to a nice little quiet county campground that we knew that is still open this time of year.

Most National Forest Campgrounds and state campgrounds are closed in our part of the state by the middle of October. We knew this little county campground was not going to have any water, that was fine, because we fill our holding tanks and bring our own. But we did know they had electricity which would be kind of nice if the solar panels didn't keep up with the shorter days of sunshine in November.

It didn't take us long to load up, and Steve said he really wanted to try out the motorhome on a drive to test out his two new little windows that we installed last week. We really kind of got cheated out of doing any fall camping because of the motorhome replacement windows order taking longer than expected. Originally it was supposed to only be a week or maybe two and it ended up being 4 weeks before we got the newly built windows returned.

Scroll back a couple blogs and you will read about the process of why we had two of the window panels replaced.

So now it was Steve's chance to try them out and they are no longer foggy when he looks on his side view mirror. It was becoming dangerous for how foggy they had been and the glass was actually etched in between the thermopanes and needed to be replaced completely. 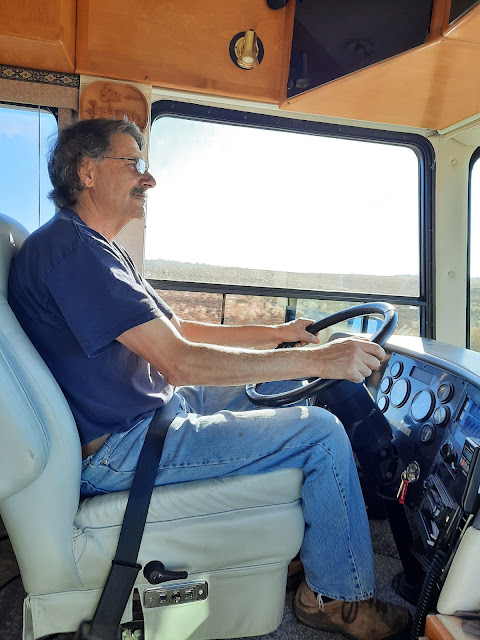 Just look at that happy man. Sitting behind the wheel of his big cruiser, the captain of a ship sailing the concrete sea.
It was a beautiful day with clear blue skies and not a single cloud in sight. The winds were pretty low compared to the high stuff that we had earlier in the week. We drove along through the Northwoods winding our way to this nice quiet little Campground. I'm not even going to tell you the name of it because we are the only ones here, and I think we kind of like it that way. I will do a review of it later after we leave and post it then.
Excuse the bugs on the windshield. 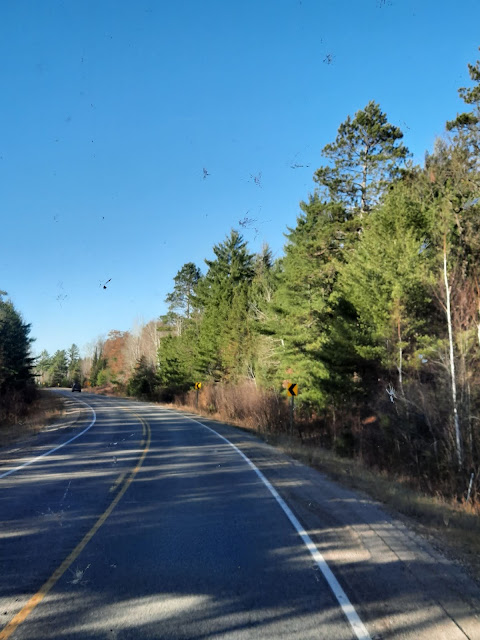 As we pulled in, we were greeted by two deer checking us out and wondering what we were doing in their campground in November. They think this is their territory now for the winter and why should we intrude? They gave us a good stare down and they didn't run off very fast. So I guess they were kind of letting us know that they are here and not going to be driven off from their stomping grounds. 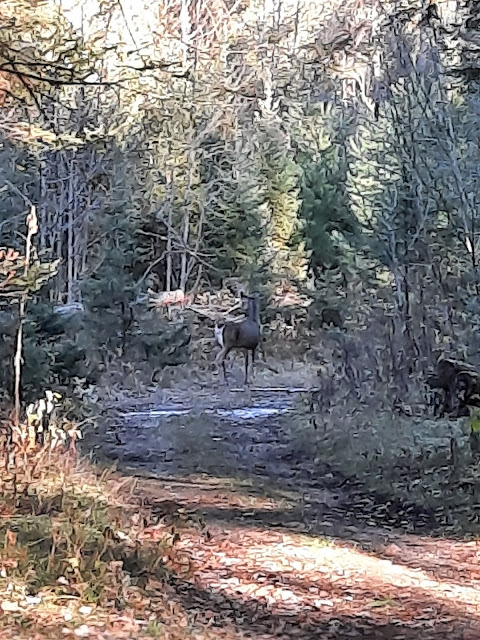 This one even came back to peek at me when I was walking over to the pay post to put in our camping fee. I think she was being socially distant! 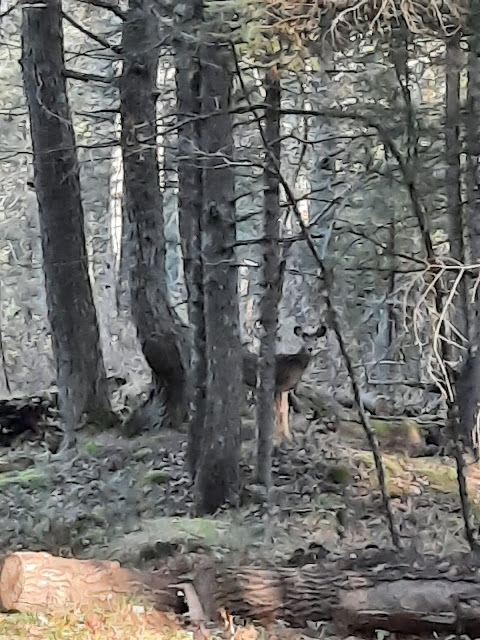 We took our favorite site of the campground, which has a nice view out to the water as well as easy to back in and a nice grassy site for the dogs. Better than dealing with muddy dirt in some of the other sites that are heavily wooded. Besides, if something were to happen to the electrical power, our solar panels could still gain enough sunlight being positioned in this type of campsite. 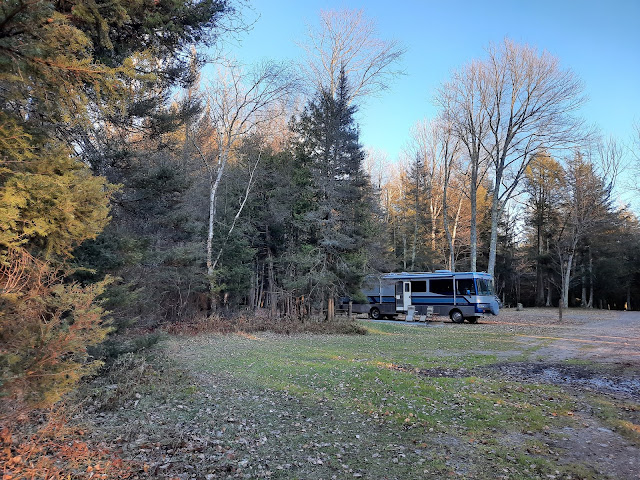 Just across the little path is a row of trees along the shoreline of the lake. Of all the campsites this one has the best view. 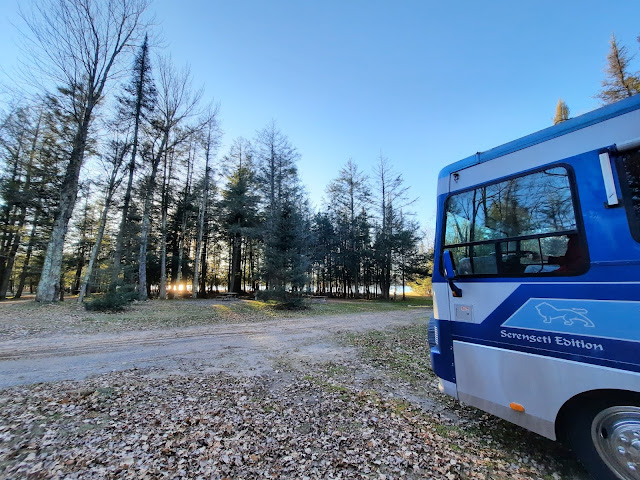 We walked by the lake just as the sun was starting to go down. Everything was pretty calm and the view was beautiful. We could hear some birds on the far end of the lake, but we didn't see any loons. Maybe they've headed south already. 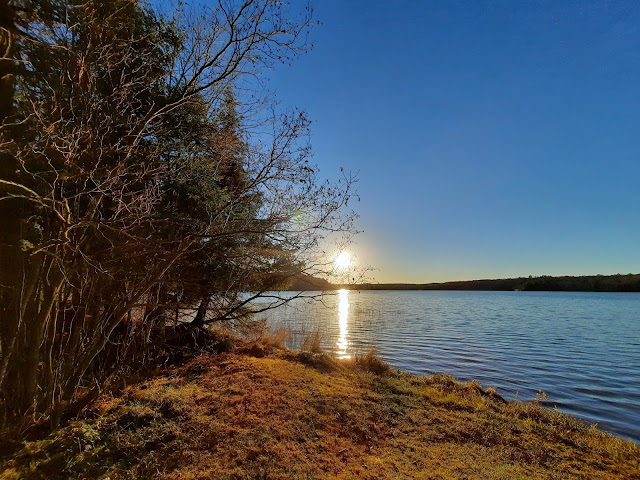 It was quite beautiful and tranquil. There was nobody else around and there were no vehicles parked at the boat landing either. So there's no fishermen out there. Hard to imagine that in just a few short weeks everything here will be turning cold and by mid-December most of the lakes are frozen over. Then the ice fishing starts and activity speeds up in these areas. By mid-January the ice will be so thick that people will be driving out there with their vehicles and setting up their little ice shanties. People up here in this part of the country are hearty and get outdoors for a lot of fun winter activities. 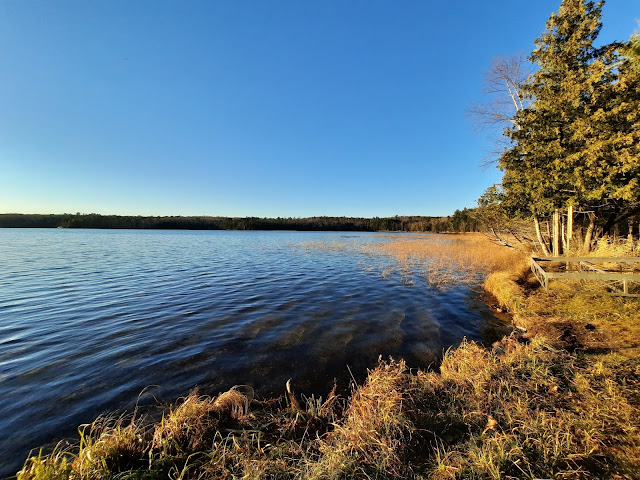 It was so warm out that we set up a couple lawn chairs and had the door and windows open on the motor home. We took a little walk around and the fall foliage is mostly down on the ground now. The pines of course are green, and the gold of the tamaracks, but most of the deciduous leaves are on the ground. 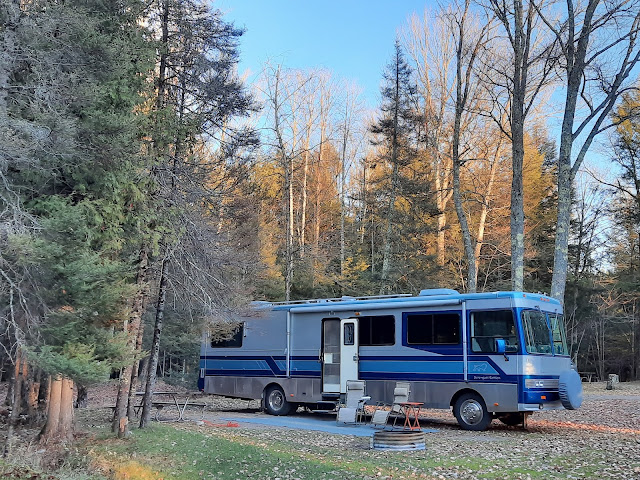 There was a whole lot of sniffing going on by these two. They are really happy to get out and go camping again. We have a little cement disc with an eye bolt cemented in. I think it had been somebody's boat anchor at one time. It makes a great hitching post for both of their long ropes with swivels on so they don't get tangled. We can pick it up and move it if we need to because it's not that heavy, but it's enough to deter them of ever wanting to take off after an animal or even people or another dog. Keeps them right here on our campsite and safe. 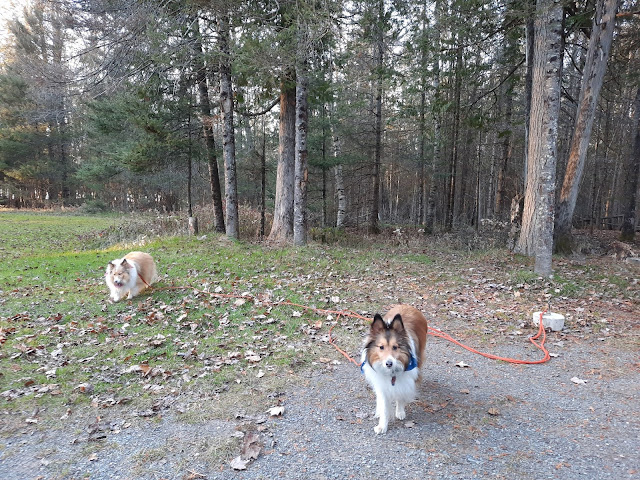 Steve decided it was time to break out a little beverage of his choice, a little bit of Canadian Labatt's hit the spot. 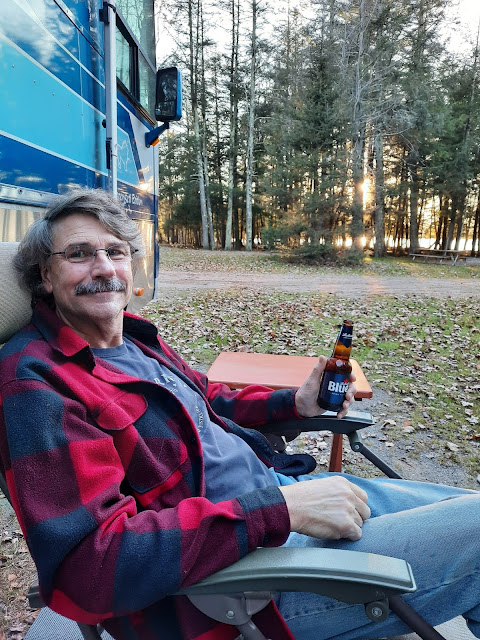 I caught a bit of the setting sun in this selfie as we were relaxing in our lawn chairs for a while, debating on what to make for supper. I had brought a variety of foods along to make but I just couldn't figure out exactly what I wanted to do. 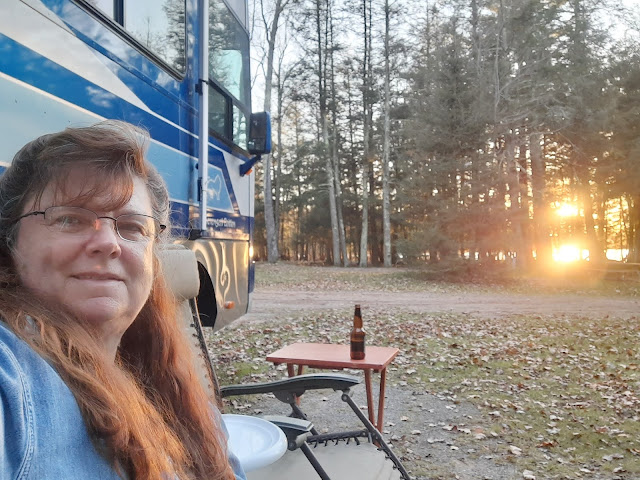 Then Steve came up with the idea to buzz up into town and grab some of their locally-made pizzas. We know them well and decided to grab some to stock up in the freezer to take home at the same time. So supper was pretty easy, we tossed in half of one of the large rectangular pizzas into the oven while we played a couple rounds of cribbage. 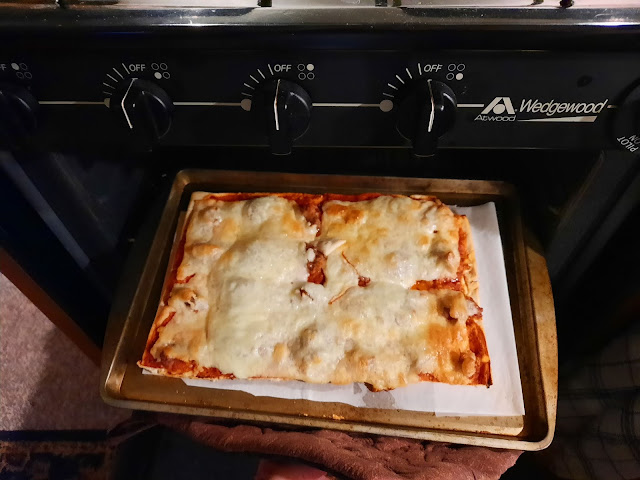 I'm so glad that we decided to sacrifice three of our drawers underneath the stove top and put in a regular RV propane oven. Otherwise, we only had the convection oven and pizza never came out very good. Actually, I really didn't care for convection cooking at all. This regular RV propane stove oven combo was a great update that we did a couple years back. Greatly appreciated.
One of the other silly reasons Steve said he wanted to go camping is that he wanted to try out his new LED lights. If you've read my blog over the last month or so, we have completely redone all of the lighting in our motorhome. Steve added multiple strips of LED lights into each of the fluorescent light fixtures that are housed in the ceiling. This is wonderful, because I hate fluorescent light. Not only do they draw less power but they give a nice warm yellowish glow to the light not that intense fluorescent glare that they were before. 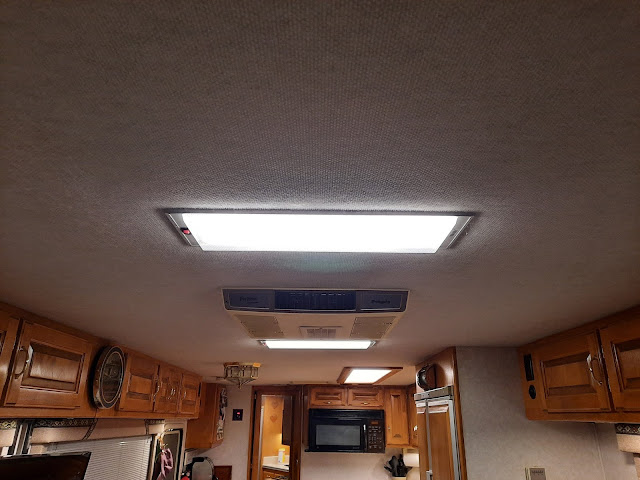 Here is a close-up, where he has 2 of LED light strips inside of the fixture. It gives a nice warm yellow glow and not that funny bluish-green color of the bright white fluorescent LED lights 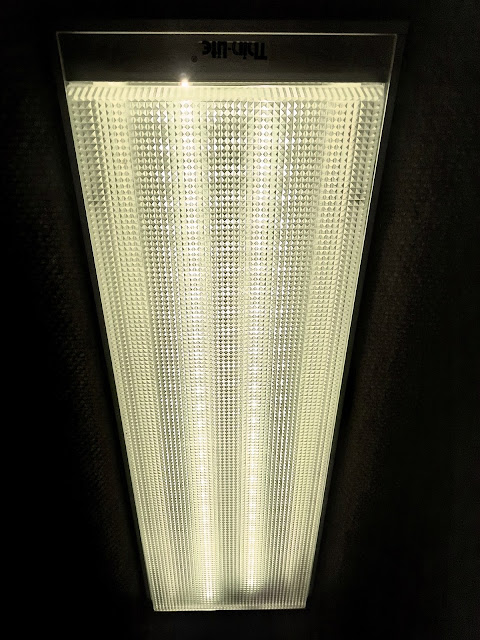 He also replaced all of the recessed puck lights underneath the cabinetry in the living room and bedroom areas. These now are all wired together with a dimmer switch for each run of lights. Again, they are the nice warm glow and not the bright LED. 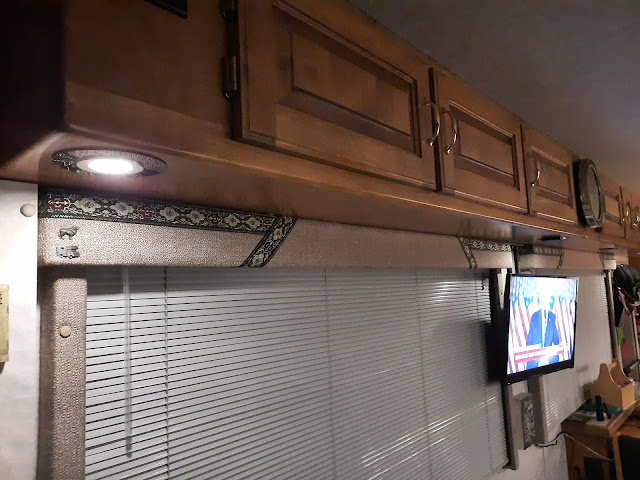 He removed the under counter fluorescent lights and put in four more of those LED pucks drilled right into the cabinetry. This was a fun project and we were able to again wire them all together and put them on one dimmer switch. It really lights up the work area of the kitchen quite well and gives a lot more light than I ever had before. 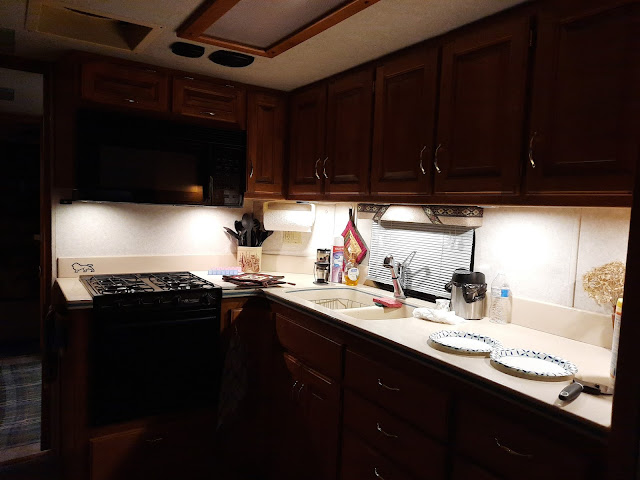 So here we are last night, cozy and warm and snuggled into our motorhome, socially distancing from anyone and staying out in the woods. Life is good! 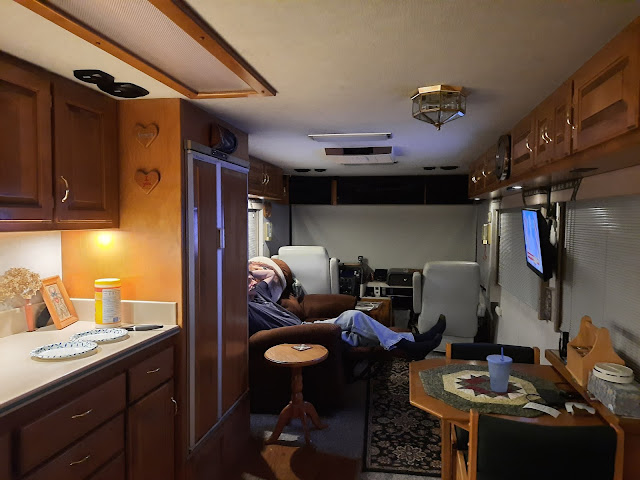 Snuggly warm wool slippers and pajamas were the attire for the evening. We turned on the TV for a little while to catch up on some of the election process and then we played more cribbage. Things were so peaceful and quiet in the woods that once we went to bed, we both fell to sleep soundly. 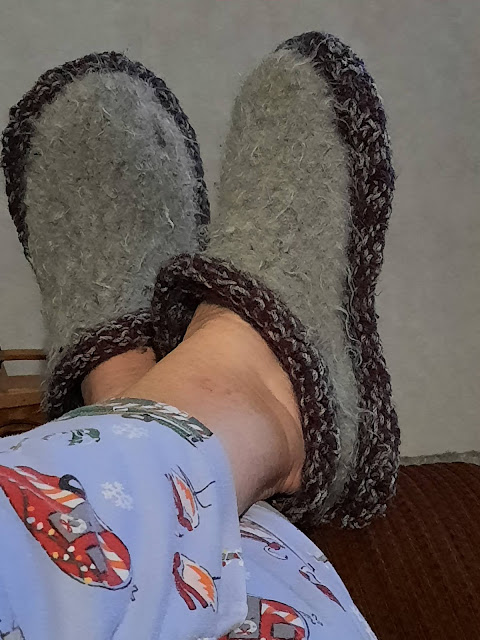 This morning we woke up to beautiful sunshine and a good weather forecast for the next two or three days. I popped some apple turnovers into the oven, I buy the unbaked ones at the Mennonite store. Along with a mug of fresh ground Jamaican Blue Mountain Coffee, we were set for the morning. 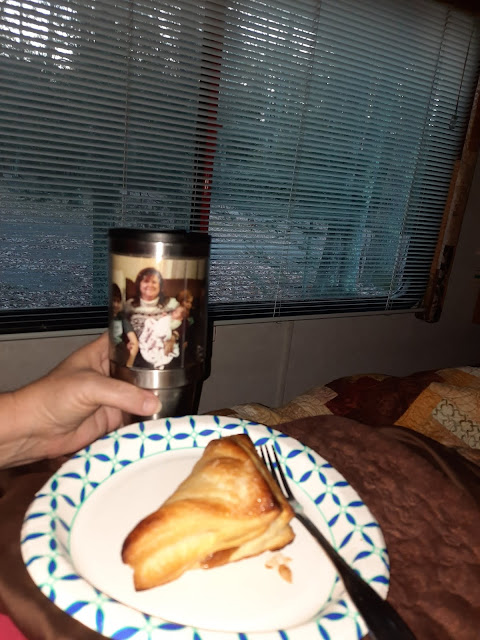 The view out of the windows as we wake up is just beautiful, and we love pulling up the mini blinds and letting in the sunshine and the nature and the green of the pines. You don't get this in a regular congested  cramped RV Park. All you see out the window there is the next person's RV. This is our kind of camping. 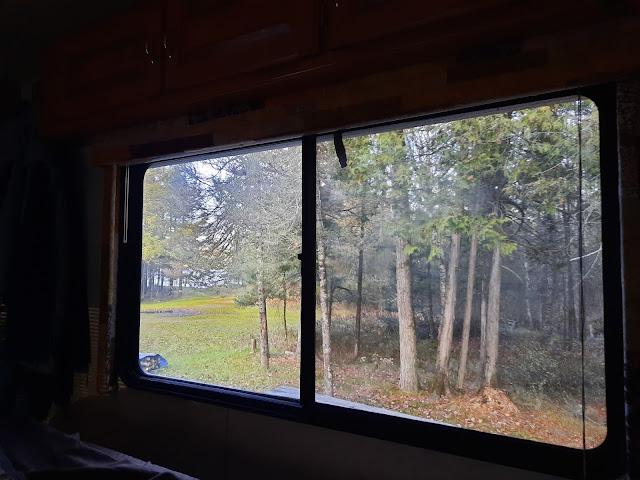 We will see what today brings. We brought a couple projects along, and we will take a few walks with the dogs, but most of all... I think we are going to just... relax.

Posted by KarenInTheWoods at 9:25 AM