Sunday morning started with a gulp of coffee, potty break for the dogs, and then dash out the door to head over to Steve's Dad's place in Waupaca.  He took us out to breakfast first....  at a little retro 1950's diner called Little Fat Gretchens! What a name!  But the food was good.


(Pa Pfundtner was in the middle of talking when the waitress snapped the pic,
really, he WAS having a good time!) 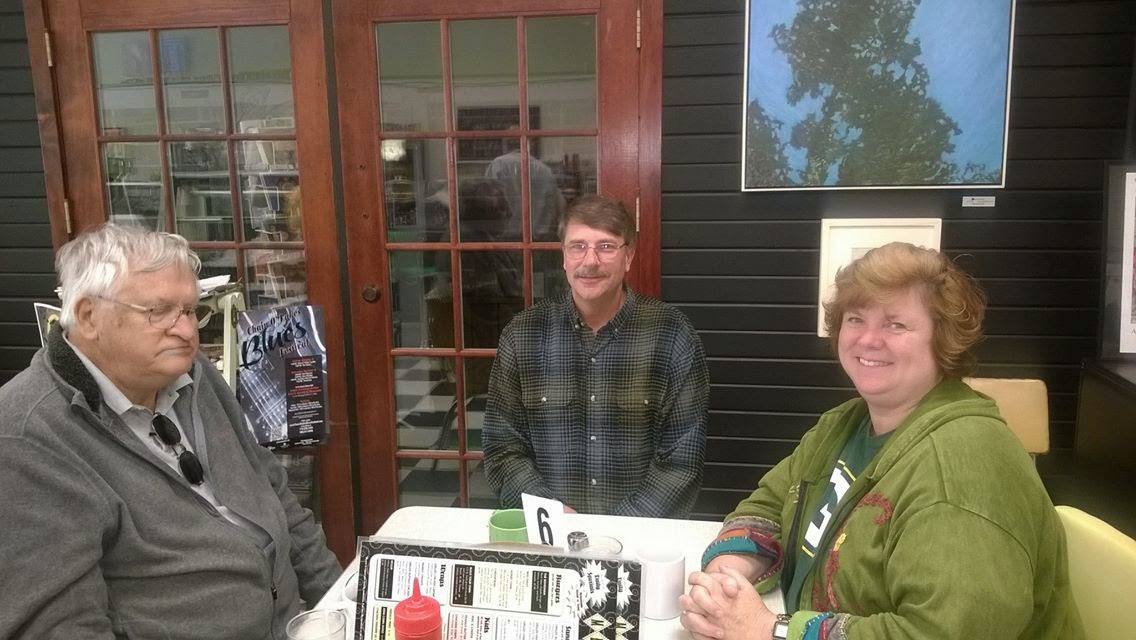 Then we went back to Pa's house to help out with some projects.  Steveio loves any time that he can fire up the Kubota and play in the yard.  Haha... big boys and their sandbox toys!! 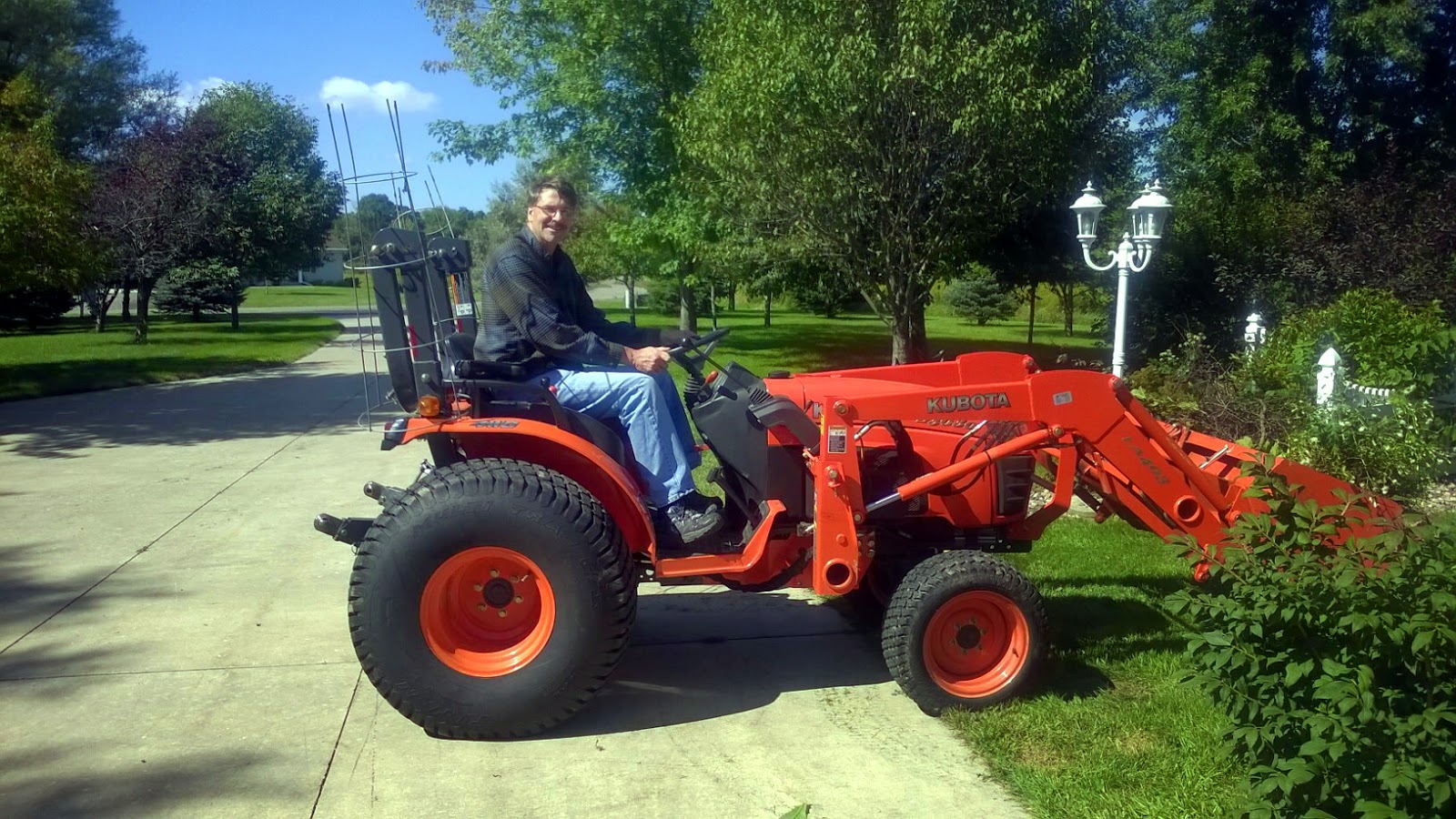 I just LOVE this pic I snapped of him and his sassy dog, Nicky 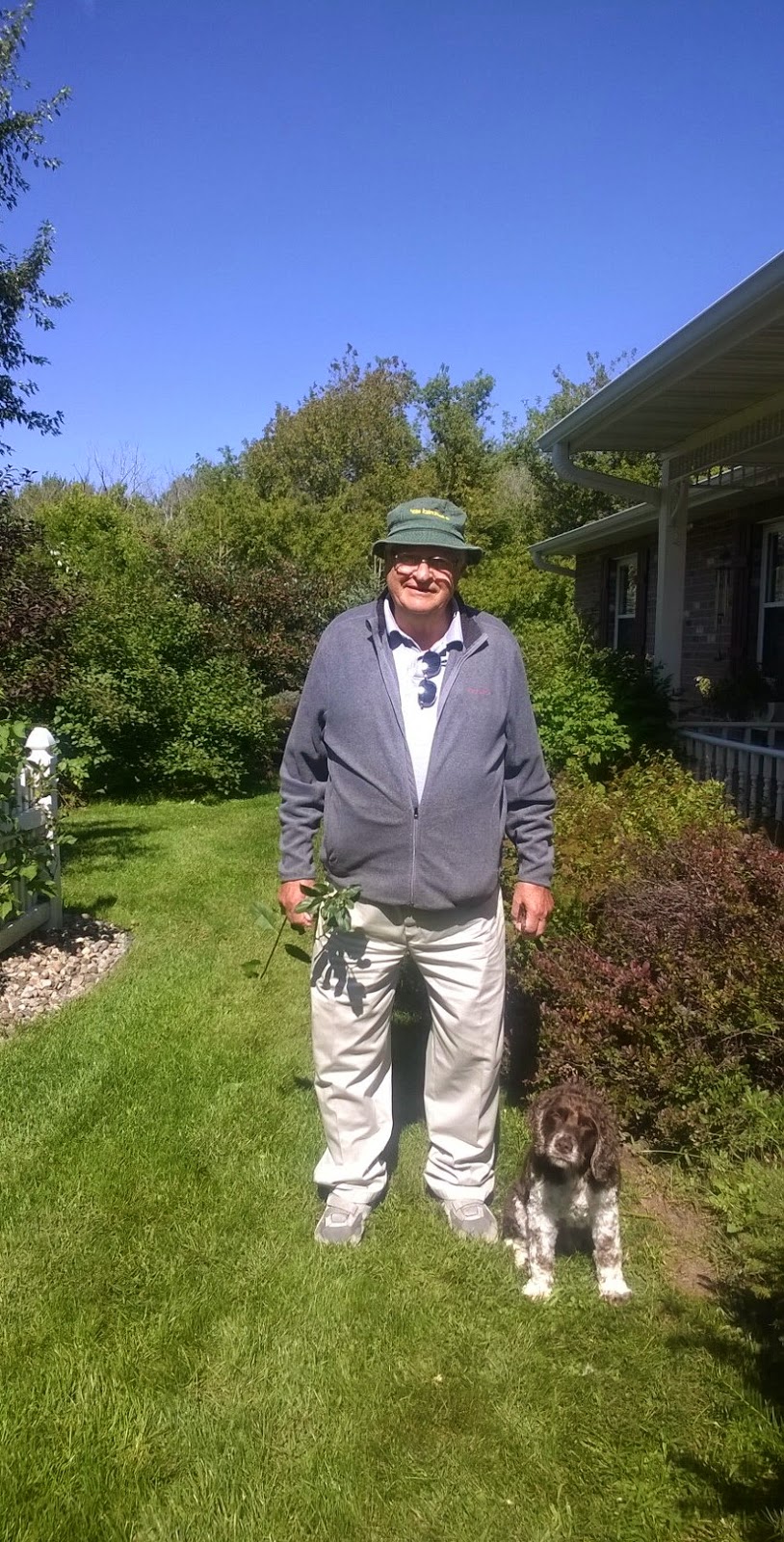 Steveio helped with some repairs, and messed with the air compressor,
and fueled up both of the lawnmowers. 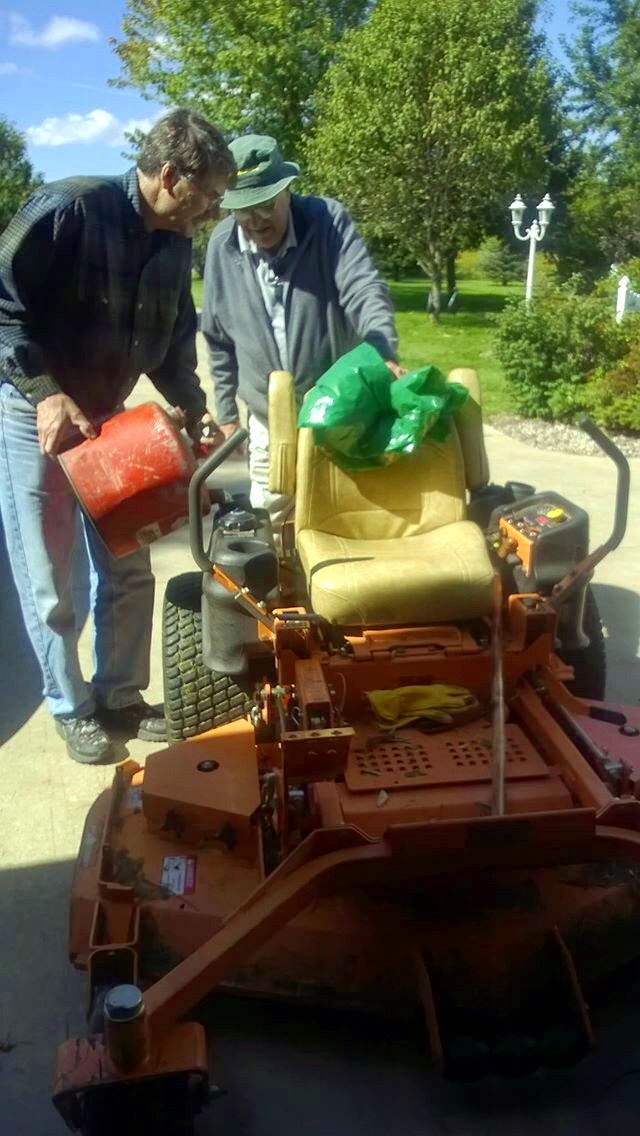 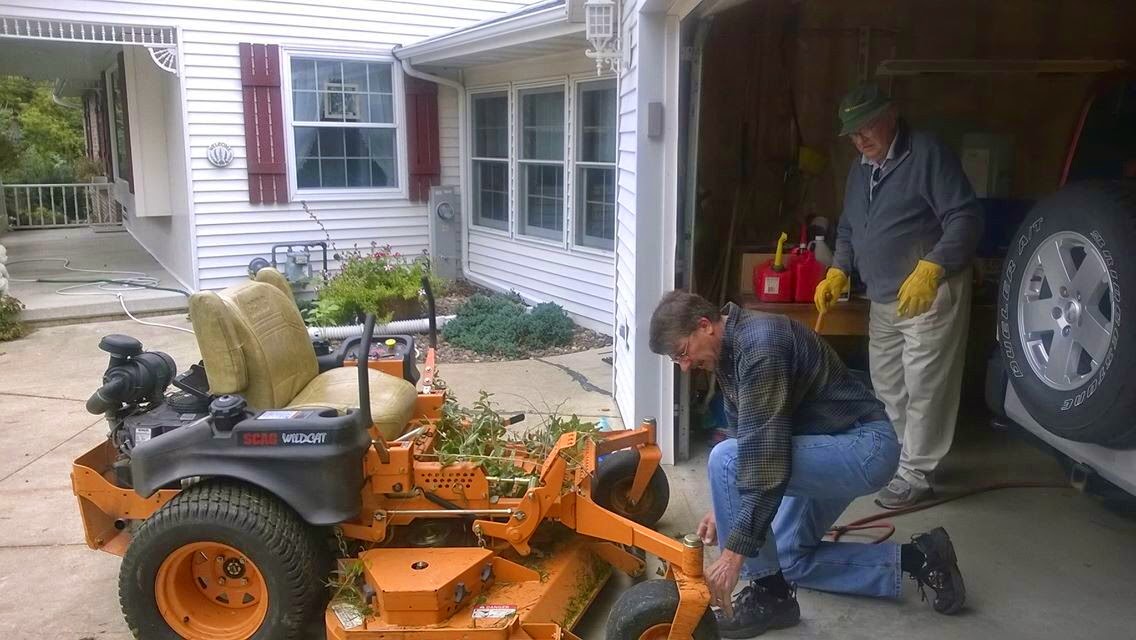 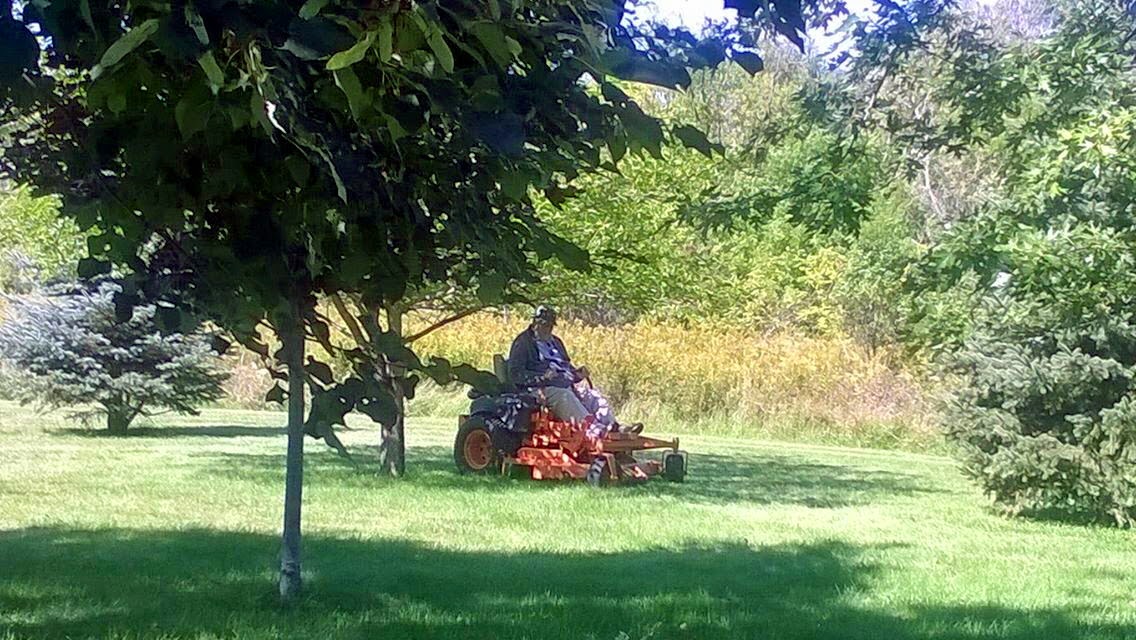 We took care of some yard projects,
cleared out windowboxes and planters,
took care of the garden plants and
got things ready for winter.

Nicky kept a close eye on his "daddy" and made sure he didn't get out of sight. 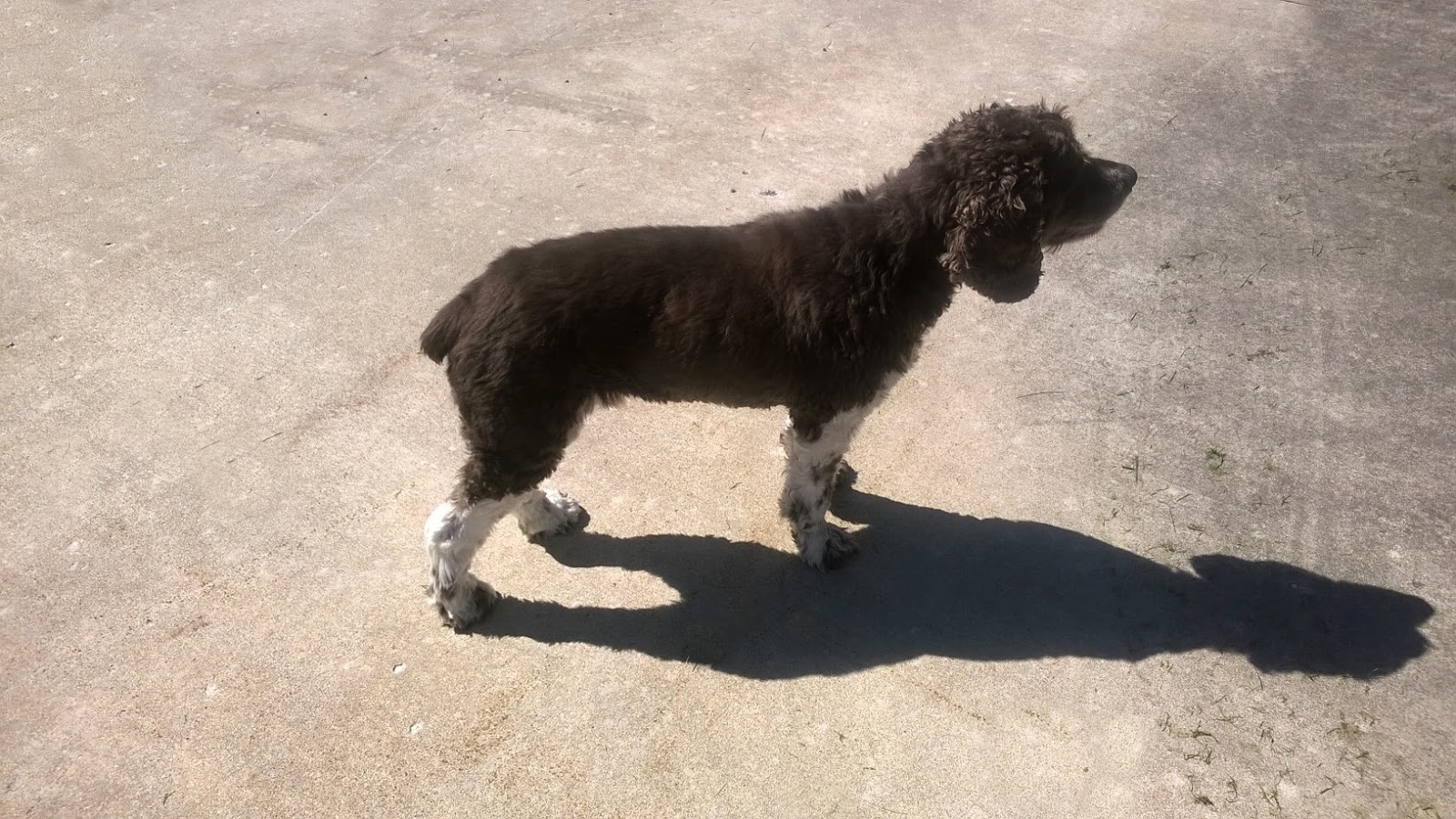 While the guys were busy with the lawns, I found a garden bench and sat down with my knitting. It was a pleasant morning and the sun was shining.  As I gazed around the yard, I was missing Mom P. who passed away almost 2 years ago.  Seeing her flowers and landscaping that made this house a home, I was wistfully wishing she was there setting next to me on the bench. Maybe she was.


I admired these sweet cranes that set out in the yard... pretty cool! 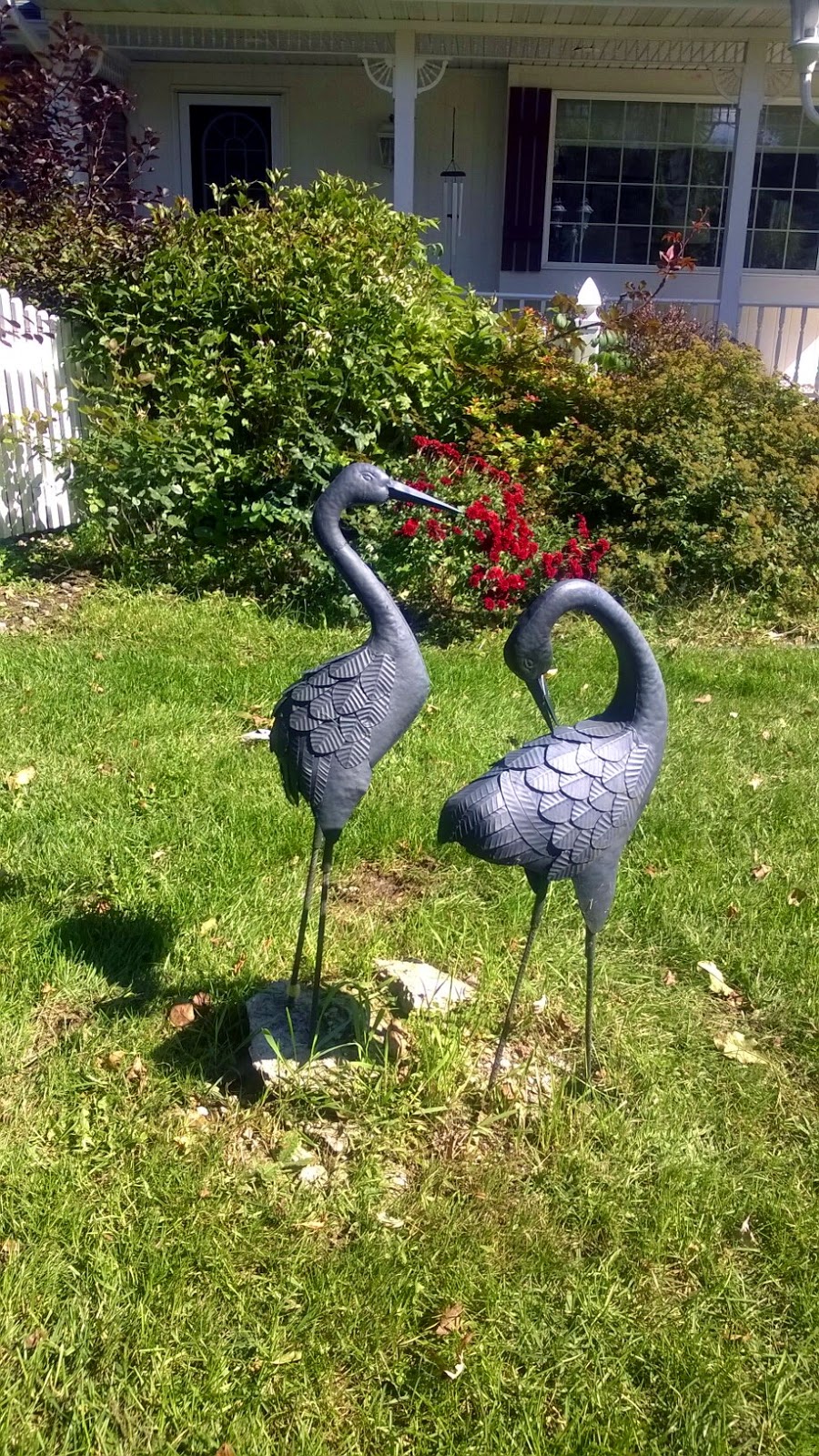 Once our work was done, it was time to head home.
I think Pa Pfundtner needed a nap!

When we got home, we tossed the rest of our things in the motorhome, and headed out to High Cliff State Park,  Yes, we were going to go camping a mere 14 miles away from home. LOL.... not really "getting away" for Steveio, because he works at the park full time!

Originally, our RVing friends Karen and Herb were going to come up from Milwaukee to camp side by side with us on reserved sites for the week.  At the last minute, they have been experiencing some major diesel engine troubles, and had to cancel. Awwwww  so as soon as they cancelled, I emailed our other Safari RVing Buddies (and quilting buddy) Paula and Mel from Wausau.  They secured the reservation for the site next to us and loaded up their rig to come on over!

As we were driving to the campground, we didn't bother to hook the Tracker Toad onto the back of the motorhome, so I was following Steve as he drove out to the park... Here is a pic I snapped as he turned the corner.  I think I will use it for our blog header page for a while too...

Paula and Mel were already set up on their campsite when we arrived at the park.  We quickly set up as fast as we could... because the Packer Game was on!!!!  Our motorhome has an outside jack for the antenna to hook up outdoors.

We set up the TV on a little table...
gathered our lawn chairs...
put out some snacks...
and watched the game! 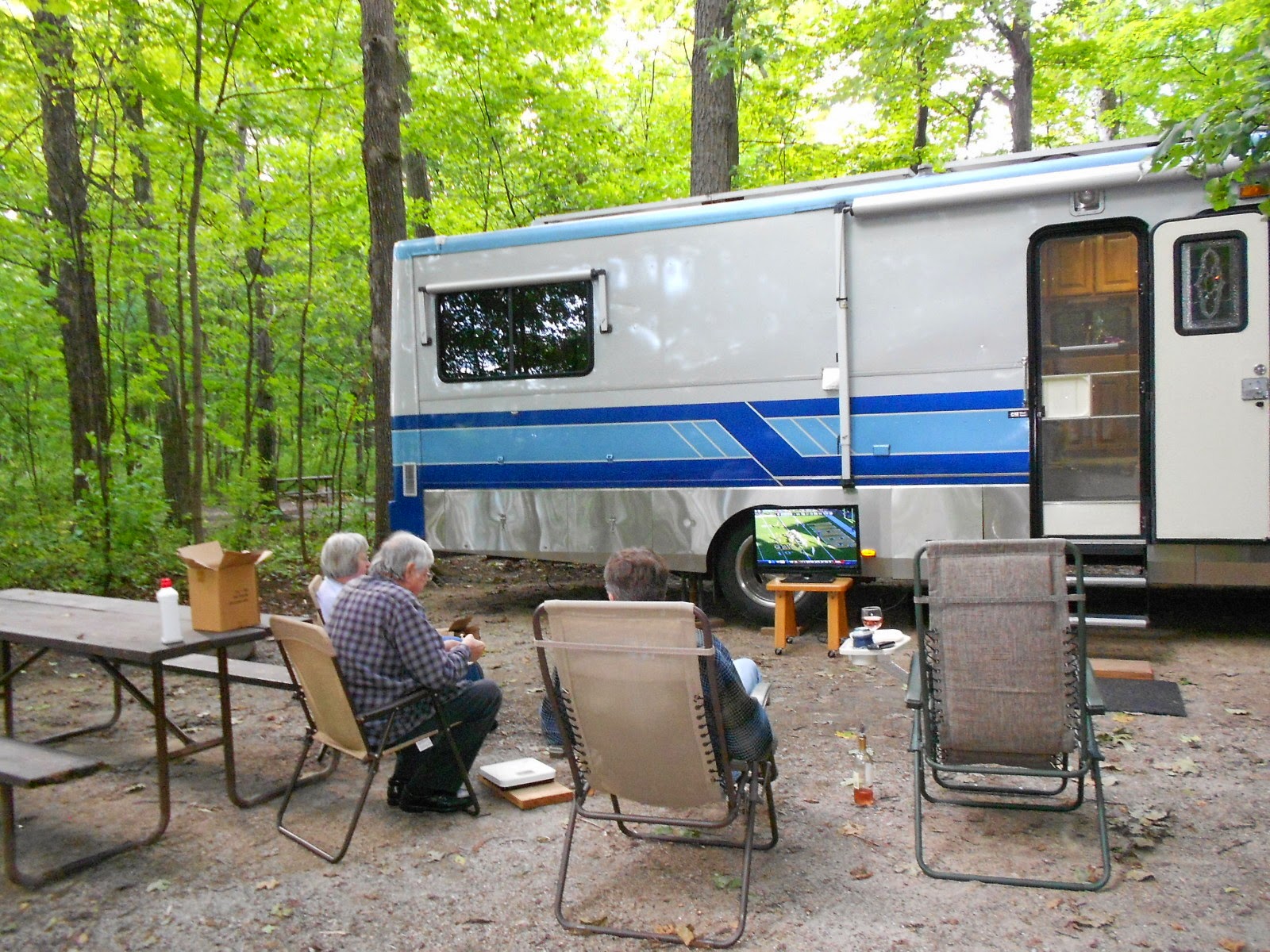 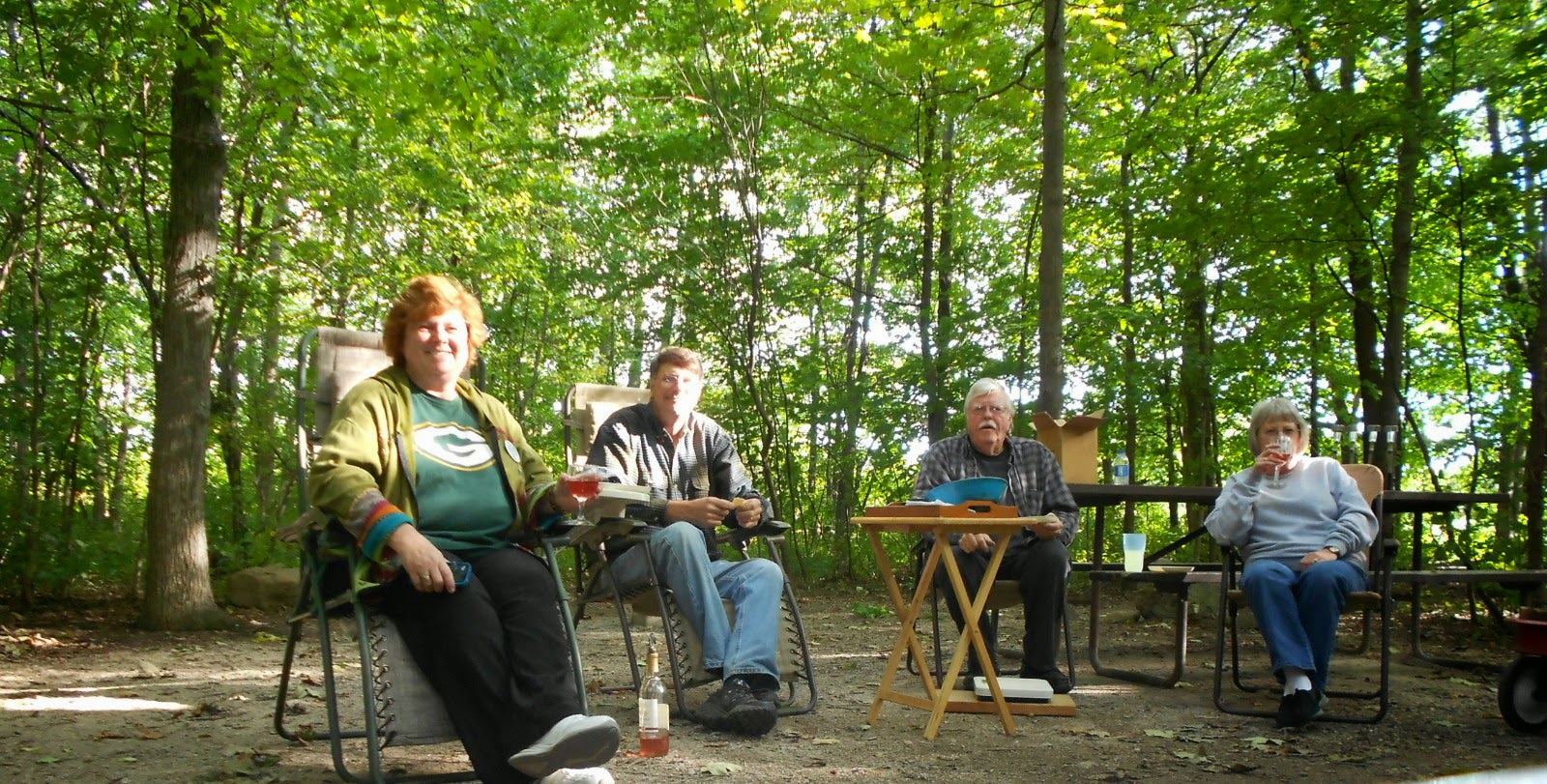 We cooked up a quick supper of bratwurst and salads...
Paula and I took the doggers for a walk around the campground
and we came across this artwork from someone who REALLY likes our park! 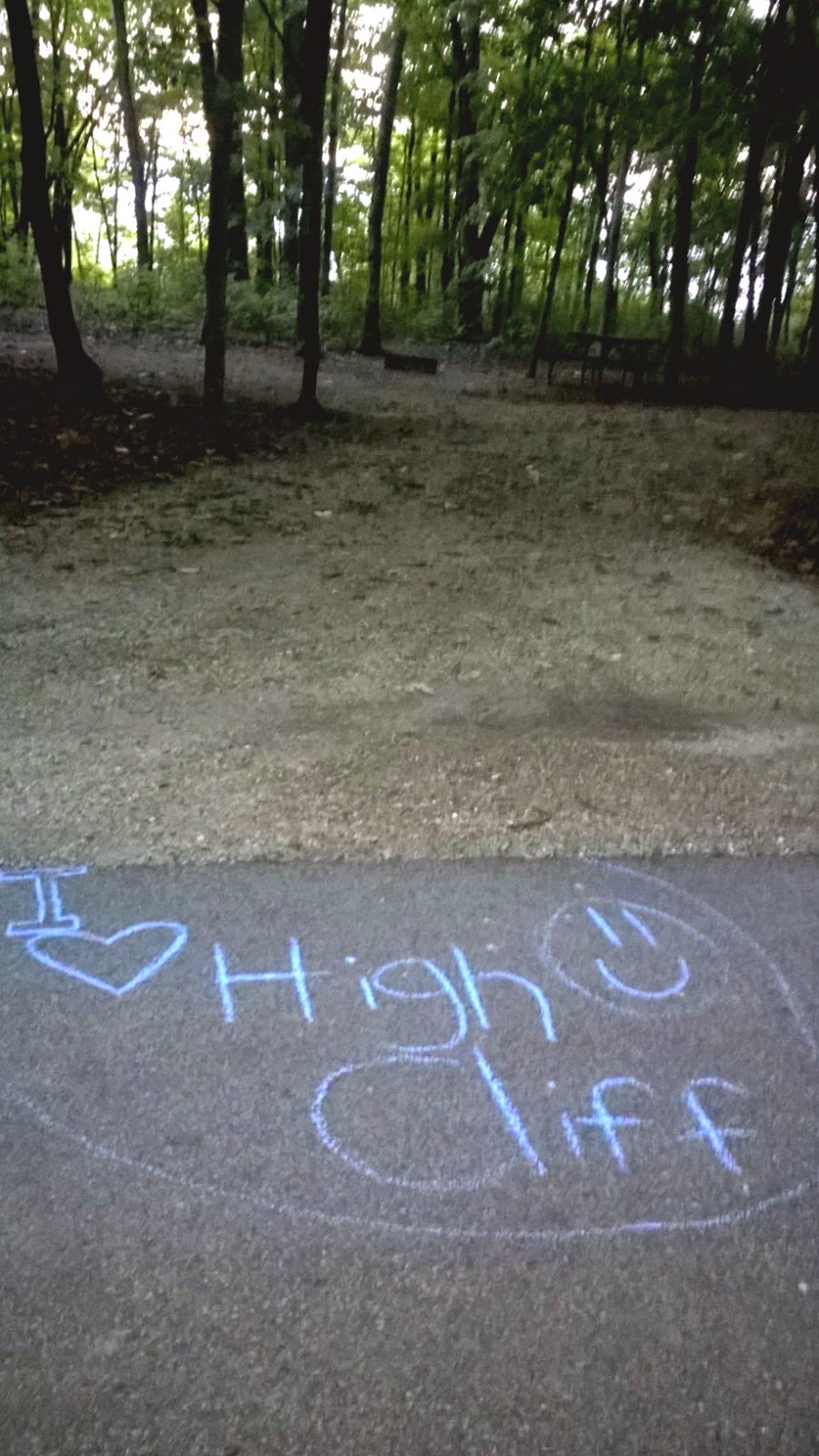 I know it rained last night...
so I imagine it will be gone this morning.
"Eco-Friendly Graffiti"!

We proceeded to jaw jack for a few hours.  When it got darker, the guys built a campfire. It was getting chilly out, so we enjoyed the warmth of good friends, good conversation, and good flamage! 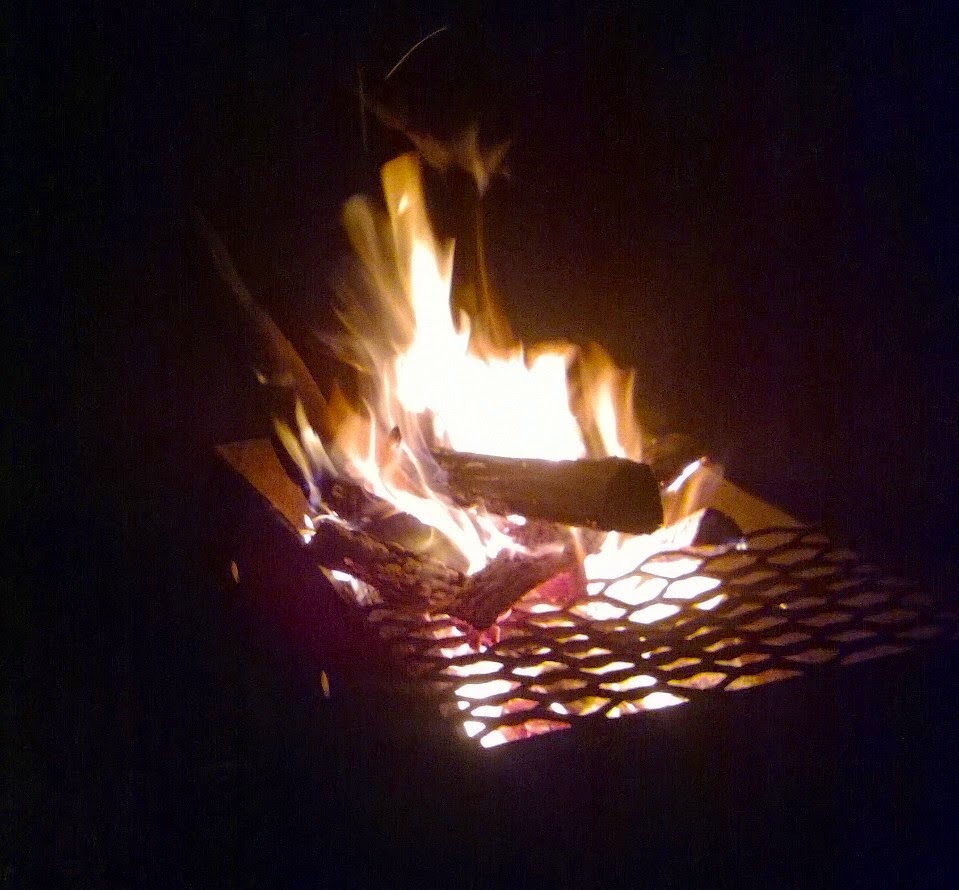 While we were sitting the darkness, Steve felt something crawling on him..... 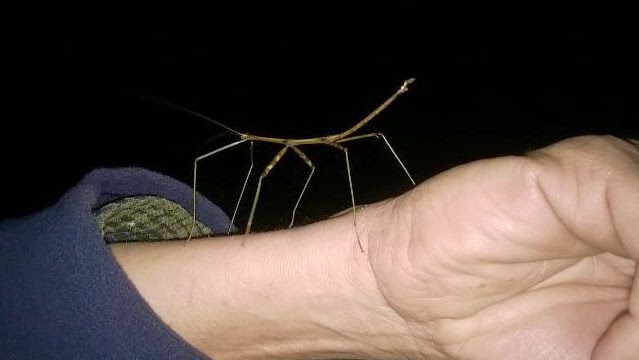 We googled for a bit of info about walking stick insects... and found this on Wikipedia:

The Phasmatodea (sometimes called Phasmida or Phasmatoptera) are an order of insects, whose members are variously known as stick insects (in Europe and Australasia), walking sticks or stick-bugs (in the United States and Canada), phasmids, ghost insects and leaf insects (generally the family Phylliidae). The ordinal name is derived from the Ancient Greekφάσμα phasma, meaning an apparition or phantom, and refers to the resemblance of many species to sticks or leaves. Their natural camouflage can make them extremely difficult to spot. Phasmatodea can be found all over the world in warmer zones, especially the tropicsand subtropics. The greatest diversity is found in Southeast Asia and South America, followed by Australia. Phasmids also have a considerable presence in the continental United States, mainly in the Southeast.

(this part is really interesting about females NOT needing males to reproduce!)

Many species of phasmids are parthenogenic, meaning the females lay eggs without needing to mate with males to produce offspring. Stick insect species that are the product ofhybridisation are usually obligate parthenogens,[11] but non-hybrids are facultative parthenogens, meaning they retain the ability to mate and are bisexual depending on the presence and abundance of males.[12] Eggs from virgin mothers are entirely female and exact copies of their mothers.

He set it back in the woods after we were done taking pics...
and a few minutes later it came back and was crawling on Paula's pantleg!

Guess he wanted to be warm too.

That is our Nature Lesson for today, folks!

Posted by KarenInTheWoods at 10:18 AM