We had a pleasant drive down highway 67 to southern Wisconsin today.  This was the first trip with our motorhome since Steve put on the new Koni shocks all around.  It made a big improvement on the handling, especially on the cornering.  Less dipping and rocking from side to side when making wide turns. We cruised along on a lovely BSPC Day.... (Blue Sky Puffy Cloud Day)

We were greeted warmly at the gate to the southern unit of the Kettle Moraine State Forest... Ottawa Lake Rec Area.  We got a full packet of information, ID tags, and a neato tote bag to haul all in.  We were directed to our free campsite and got set up.  What a great site!  We even have a little pavilion structure over our table. 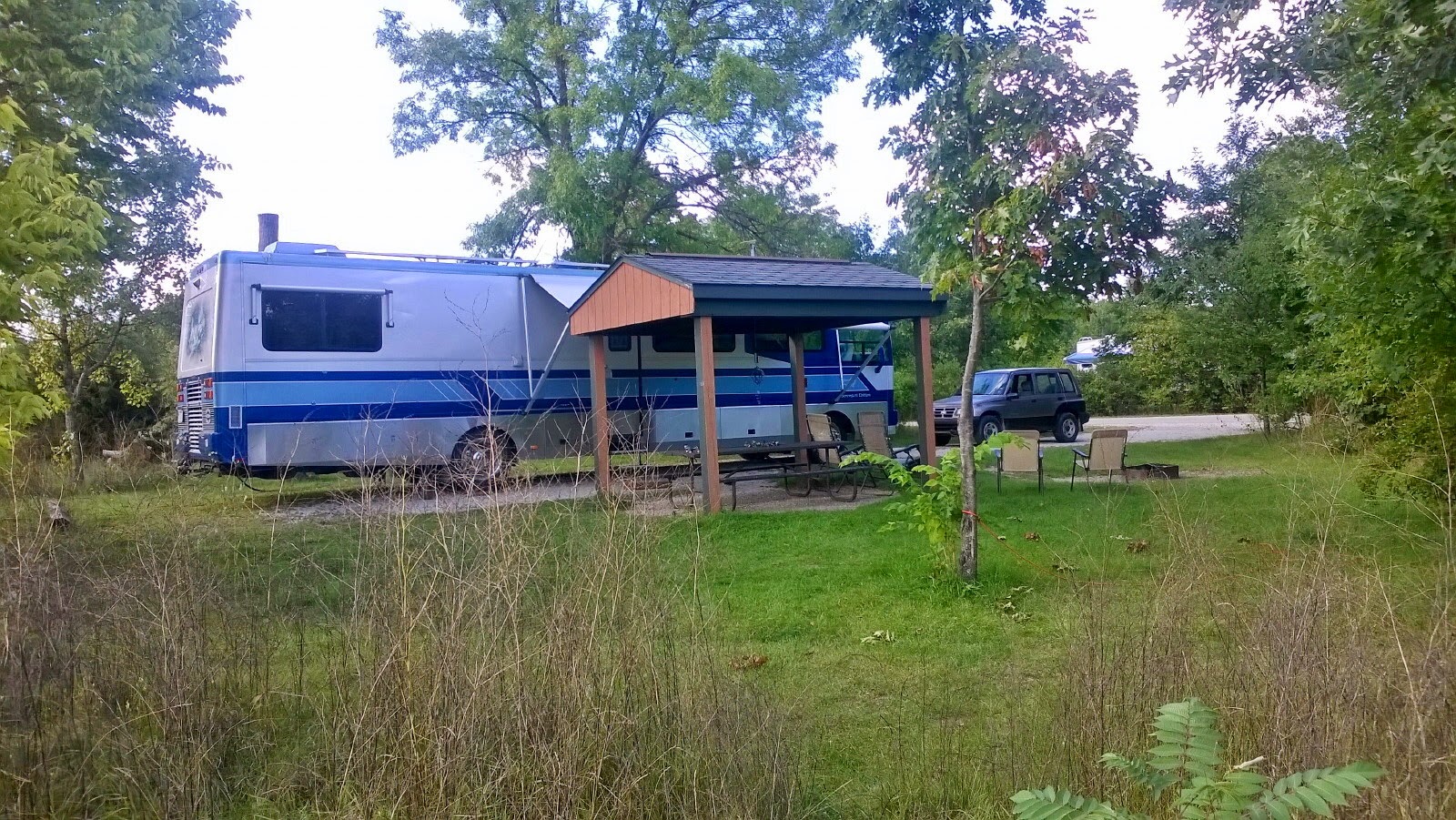 Once the doggers had a chance to sniff and check out our campsite, we got our potluck contribution going in the crock pot. (little smokies in BBQ sauce with grape jelly)   We wandered on over to register and join in with the other campground hosts from state parks of Wisconsin.

There were some silly little contests like guess how many acorns were in a jar, or a line of animal pelts to identify (I got the opossum wrong!- who knew they were that thick and lush?)   One of the leaders had brought a huge variety of heirloom tomatoes which we had taste testing of about 10-12 different kinds!

Soon the potluck started and we were treated to two big long tables of contributions... and we ate our fill and then some nice desserts to top it off.  Some door prizes were drawn and our own Steveio won something!!!  A nice knit hat and a camping cookbook.  How great was that?

We took a short walk after dinner along the water's edge for the next part of our program.  What a view..... 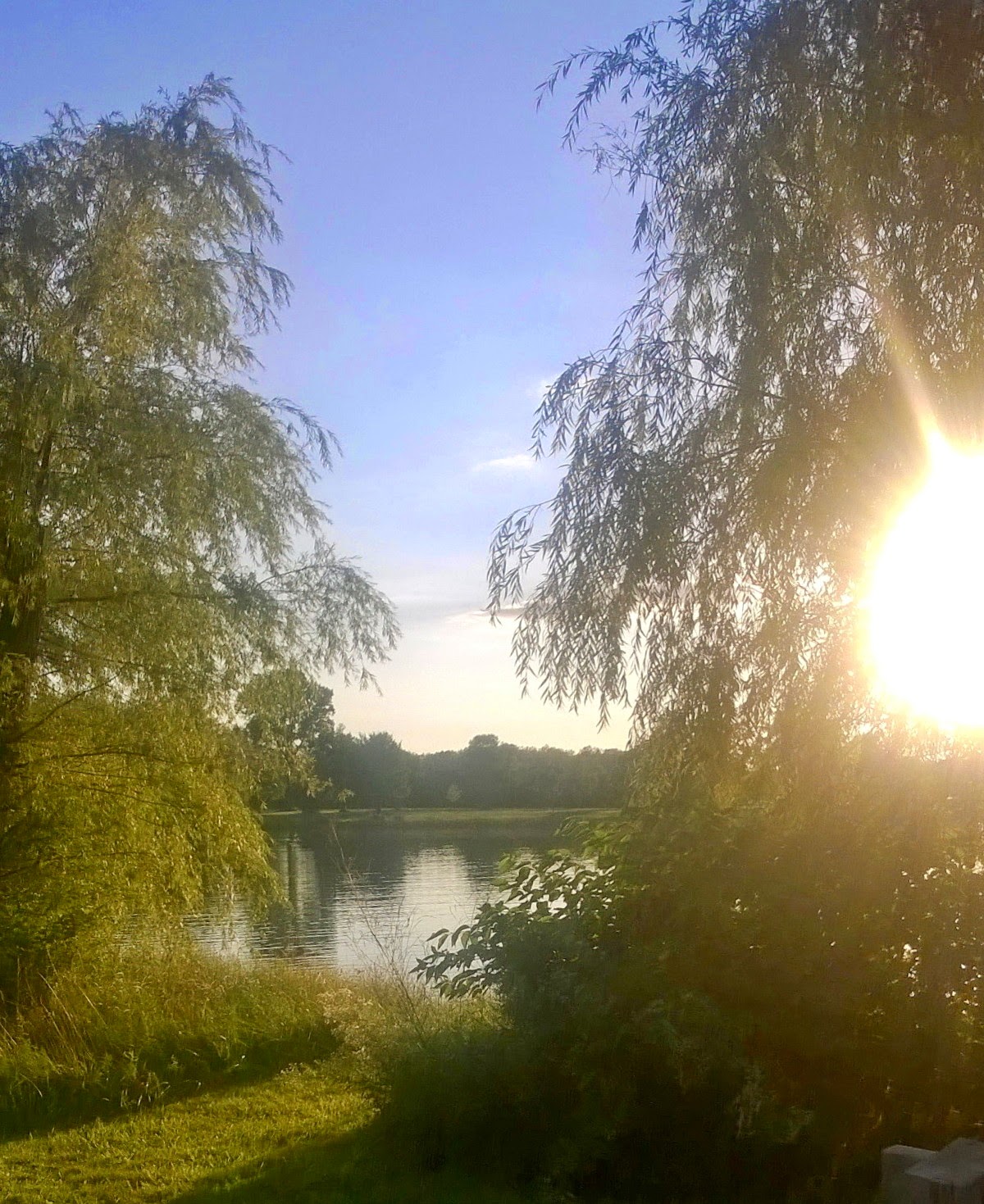 We were then ushered over to a nature program in the amphitheater.  The guest speaker was a woman named Leslie Keuhl and she was speaking on behalf of a non-profit group called "Wildlife In Need Center" located at W349 S1480 S. Waterville Rd. Ste B, Oconomowoc, WI 53066  262-965-3090 and their website is http://www.helpingwildlife.org/   She is their Wildlife Education Coordinator.

Leslie showed us some amazing animals... many which were rescued and made healthy but cannot be returned to the wild. Many because they are too imprinted on humans and don't know how to be a wild animal anymore.  Each one had story and is now filling the role as an Animal Ambassador to teach people what to do and NOT do when an animal needs help.  If you don't know what to do, it's best to call them first and find out before you interfere and make matters worse.

Some of the animals were amazing.... and had such stories!

Meet Jewel the Ornate Box Turtle... only a small number remain in Wisconsin any more.This is a turtle that lives in the ground and not in water.  In the winter it has to dig itself down below the frost line to survive.  (6 feet or more in Wisconsin) 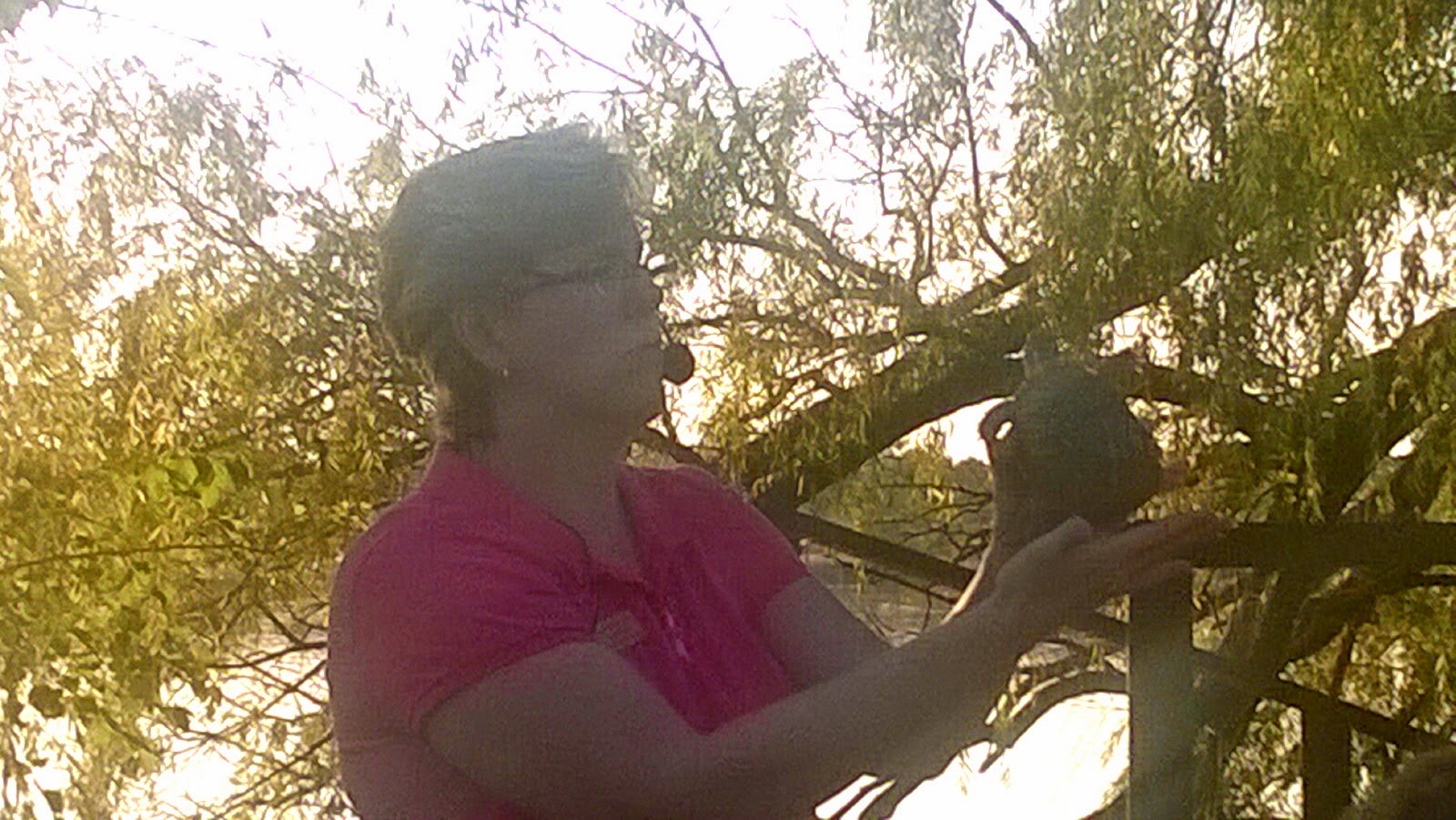 Someone actually removed this protected endangered turtle from it's natural habitat and tried to sell it to a pet store!  The pet store owners recognized it as an endangered species and turned it over to the authorities. During it's journey, it had been dangerously exposed to other turtle species and other possible contaminates that even if they knew where it had been captured from, it could not be returned for fear of infecting other turtles. 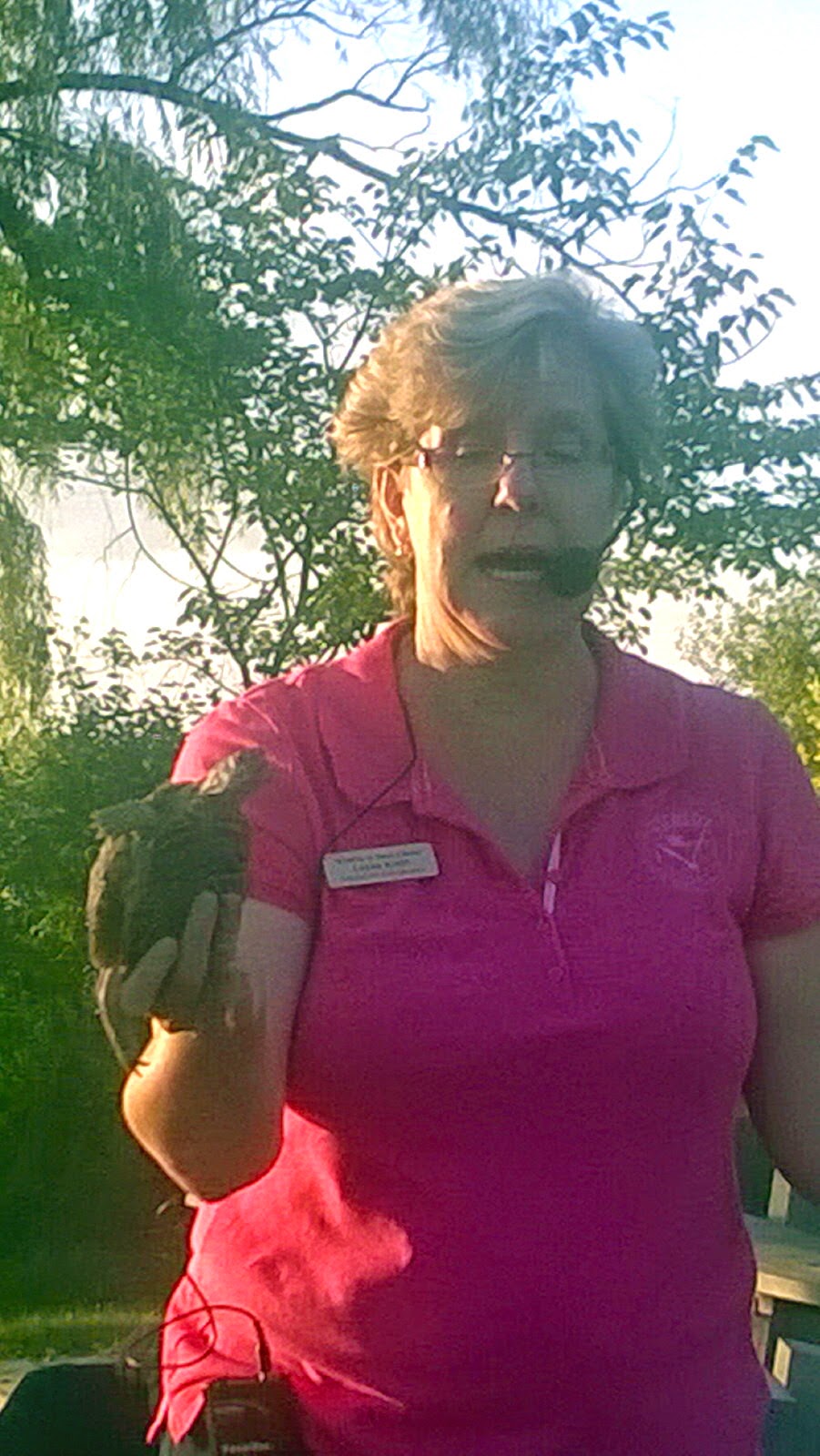 Next on the list of Animal Ambassadors was Meadow... a young Bull Snake.  Leslie explained she could eventually reach about 8 feet and get thicker as she gets older too.  The snake had such lovely markings and was really accustomed to being handled. 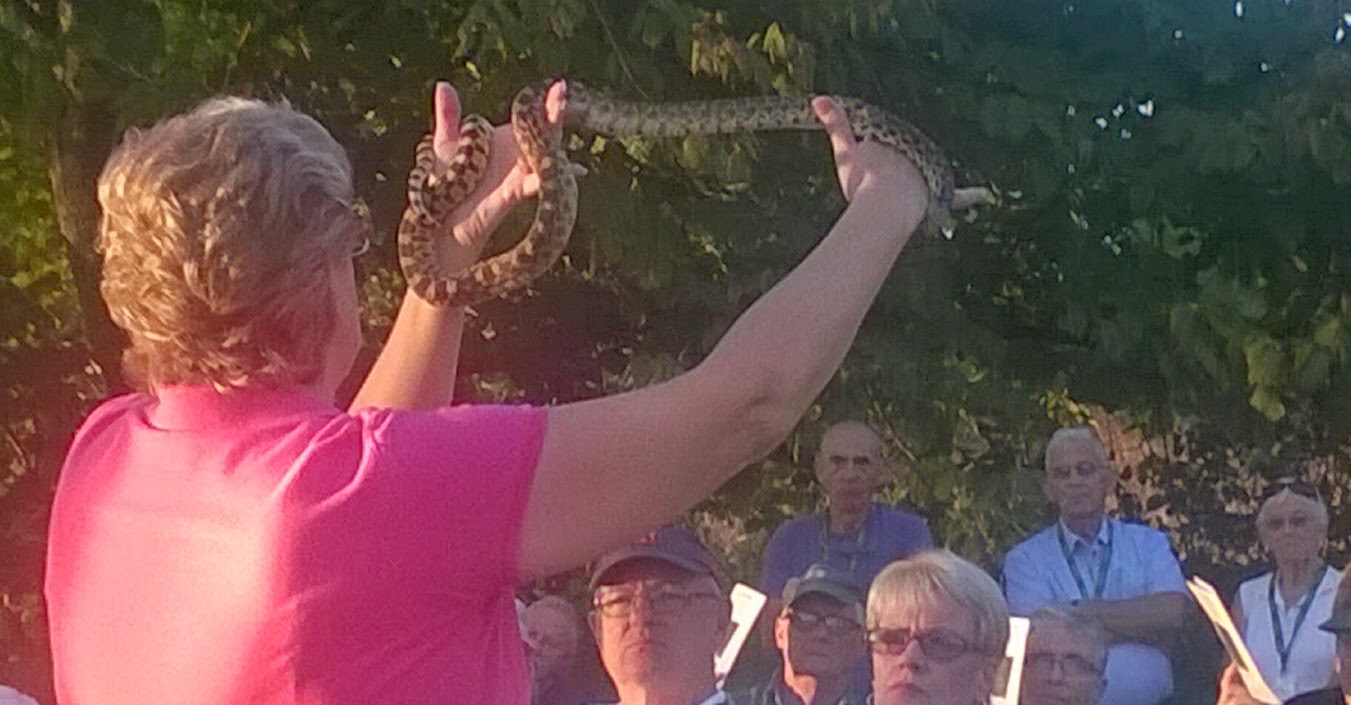 The previous snake had been named Slither that was used as an Animal Ambassador, but she had gotten arthritic and didn't enjoy being handled much anymore.


This next guy was a real character!  His name is Waldo the Woodchuck!  Someone actually had the audacity to make a PET out of him in a campground for a summer, having him in their motorhome and eating people food while laying on the couch!   He has no idea he is woodchuck and really thinks he is a dog.  At the end of summer, the people were going to leave him behind and go home.... so the poor guy was eventually brought to the center for protection.   Leslie was bribing him with almonds to hang out for us, and he was grunting and making the funniest sounds each time the bowl of treats was too far away.  As long as the bribes were forthcoming, he was happy to pose for us. 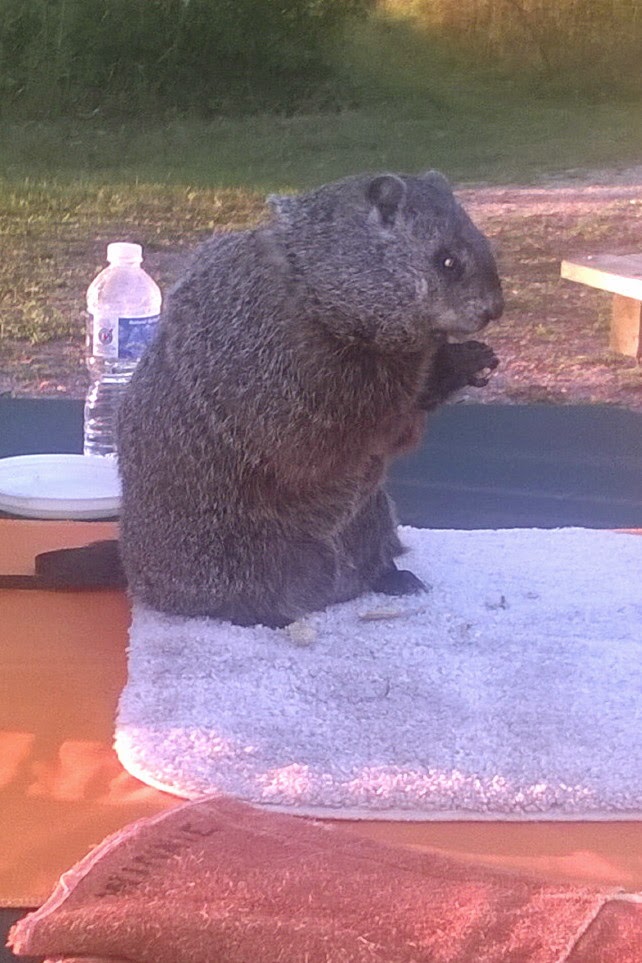 He reminded me of a grumpy old man!

As the program went on, the sun was sinking further in the sky...
and I could not resist snapping a few pics 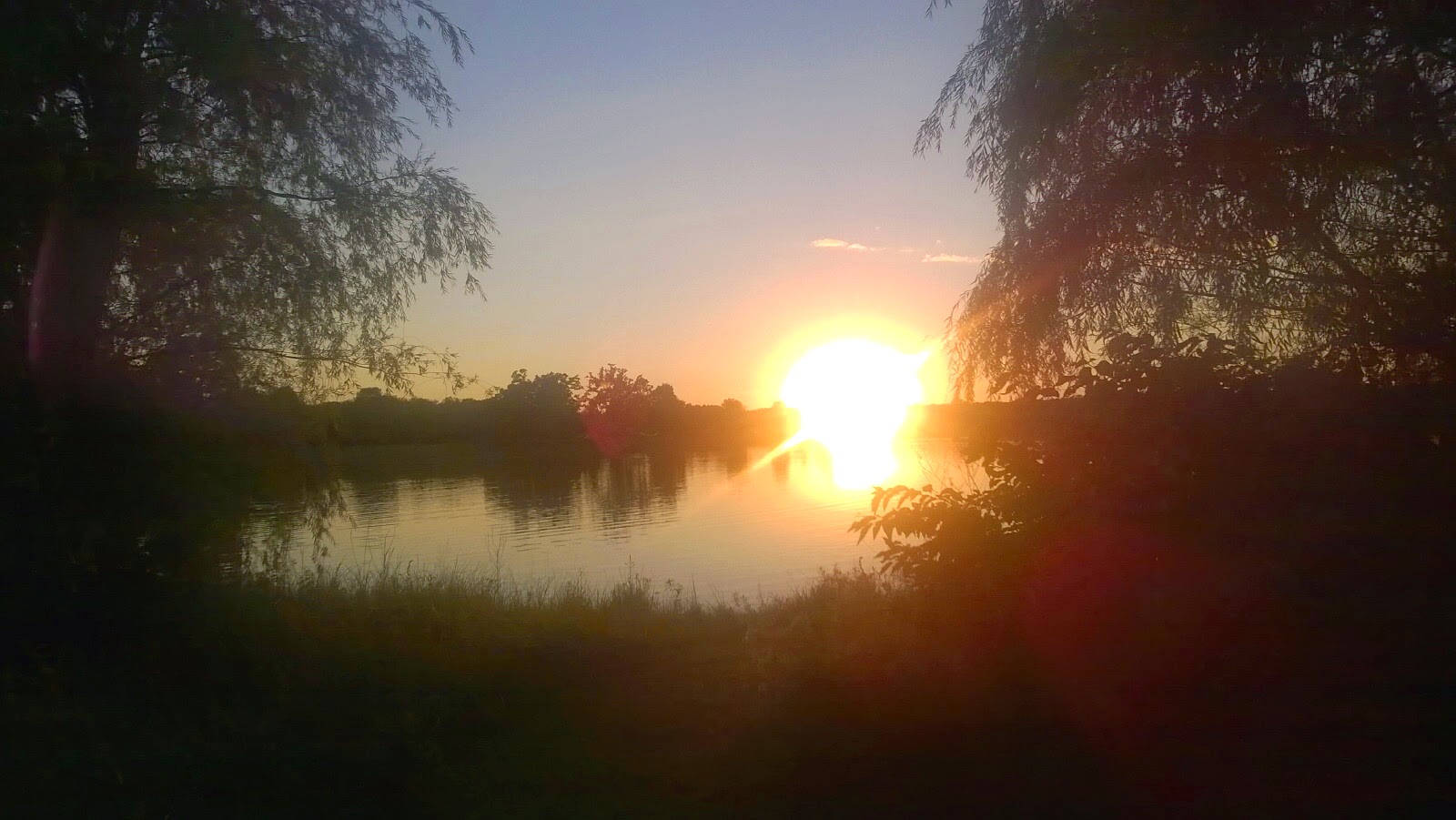 It was peaceful and calm....
what a pleasant place. 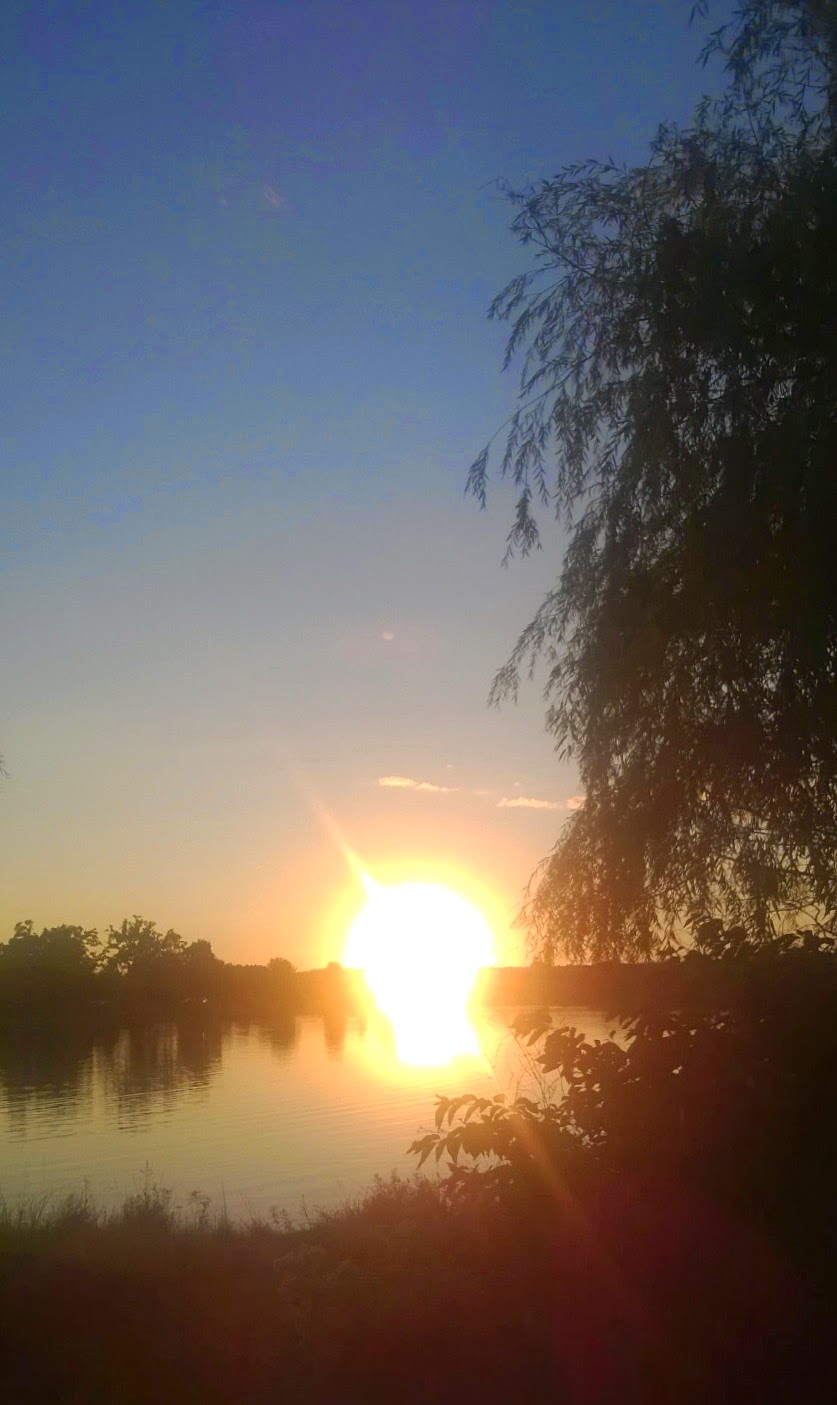 The next animal on the docket was a Kestrel bird called a Sparrow Hawk... her name is Grace.  She had a broken wing/shoulder and had to be rehabbed.  She was not able to fly fast enough to hunt on her own, so she is a lifelong resident of the center now... and will set on the glove and watch and look around at us (thinking we could all be "food"?) 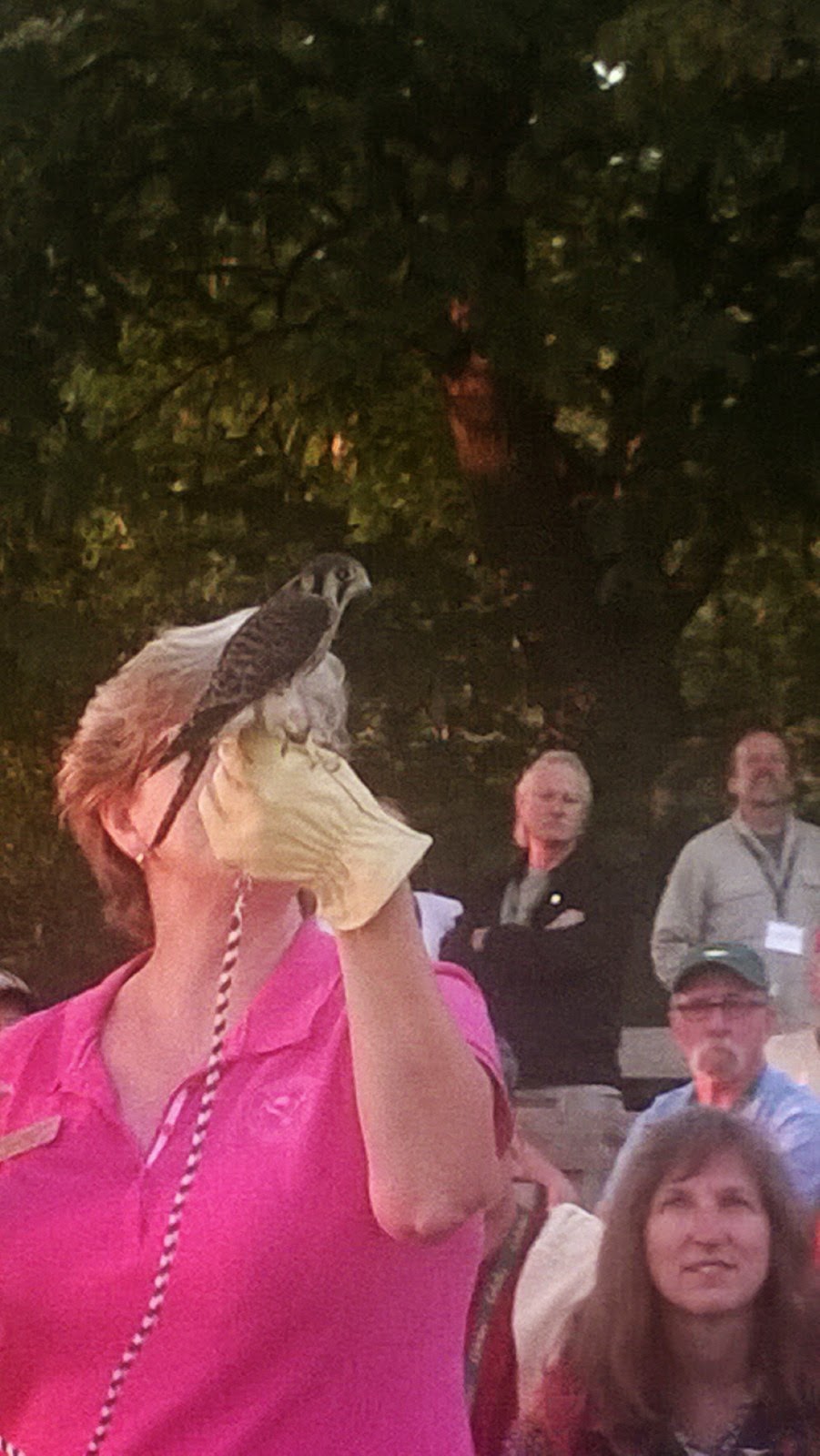 The final star of the show is a lovely impressive Great Horned Owl named Dakota.  He was a real HOOT!  LOL  He was mumbling and grumbling and hooting at Leslie as she took him out of his carrying box.  What a massive animal and soooo intimidating when you looked in his eyes. 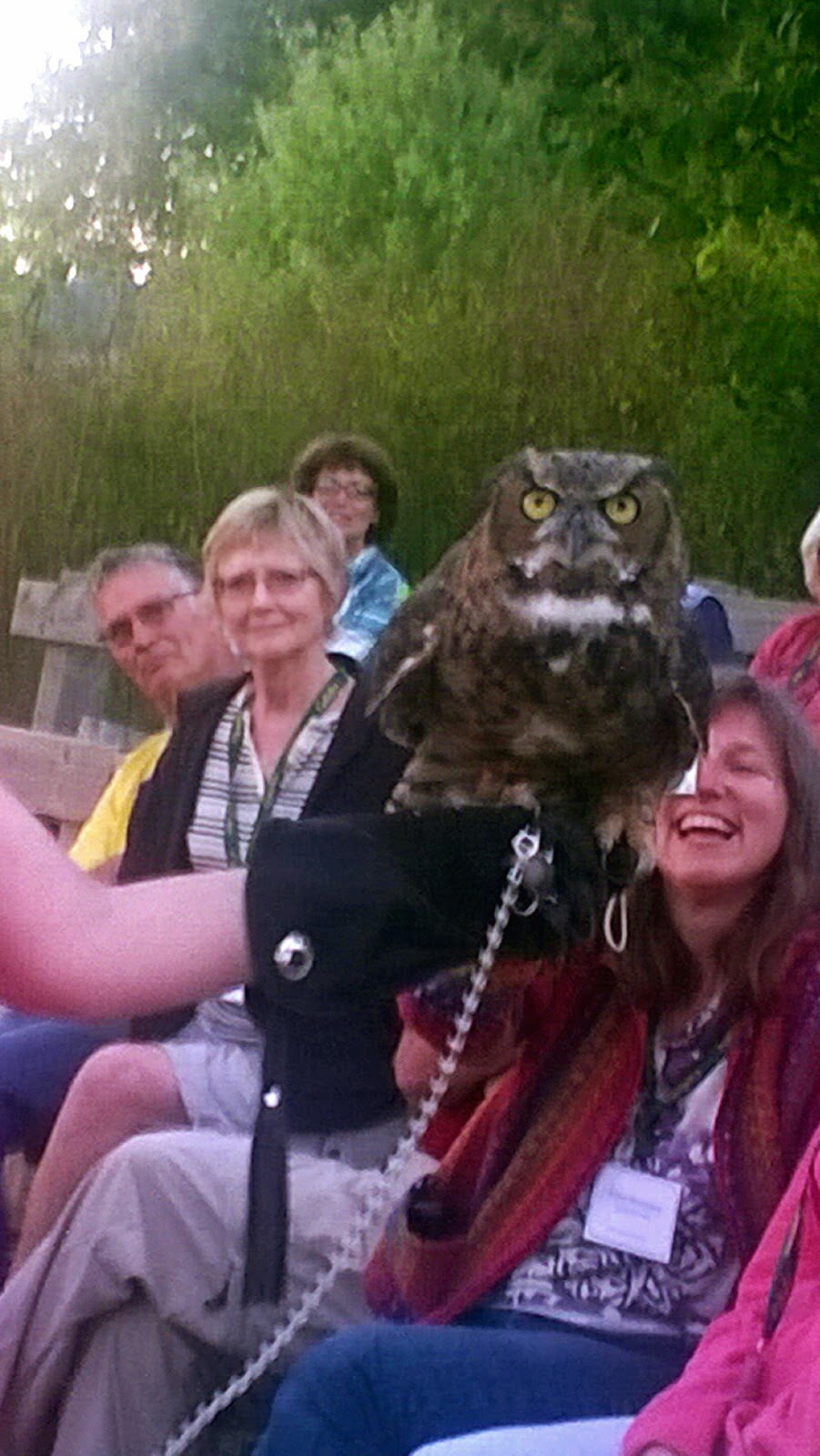 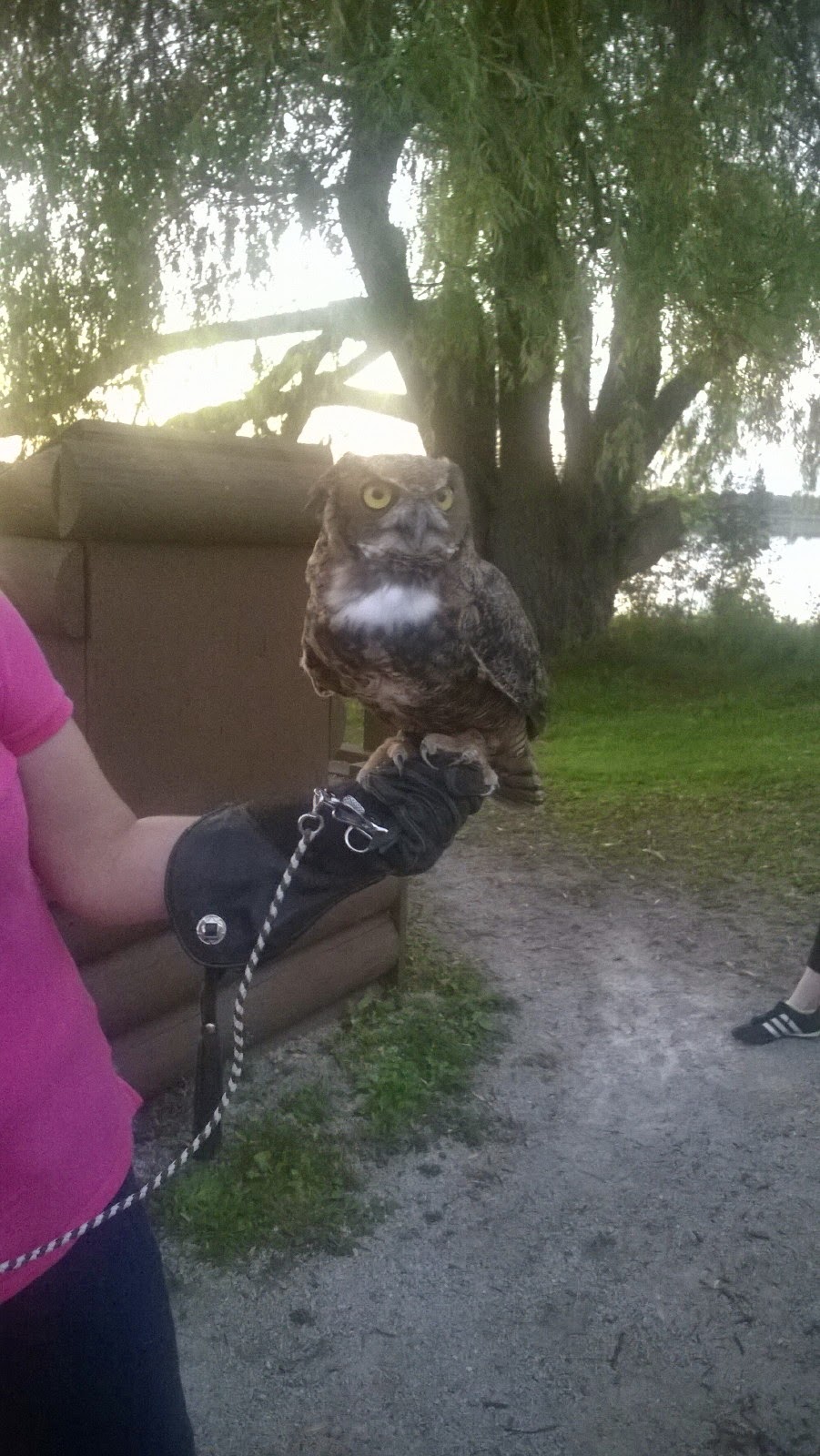 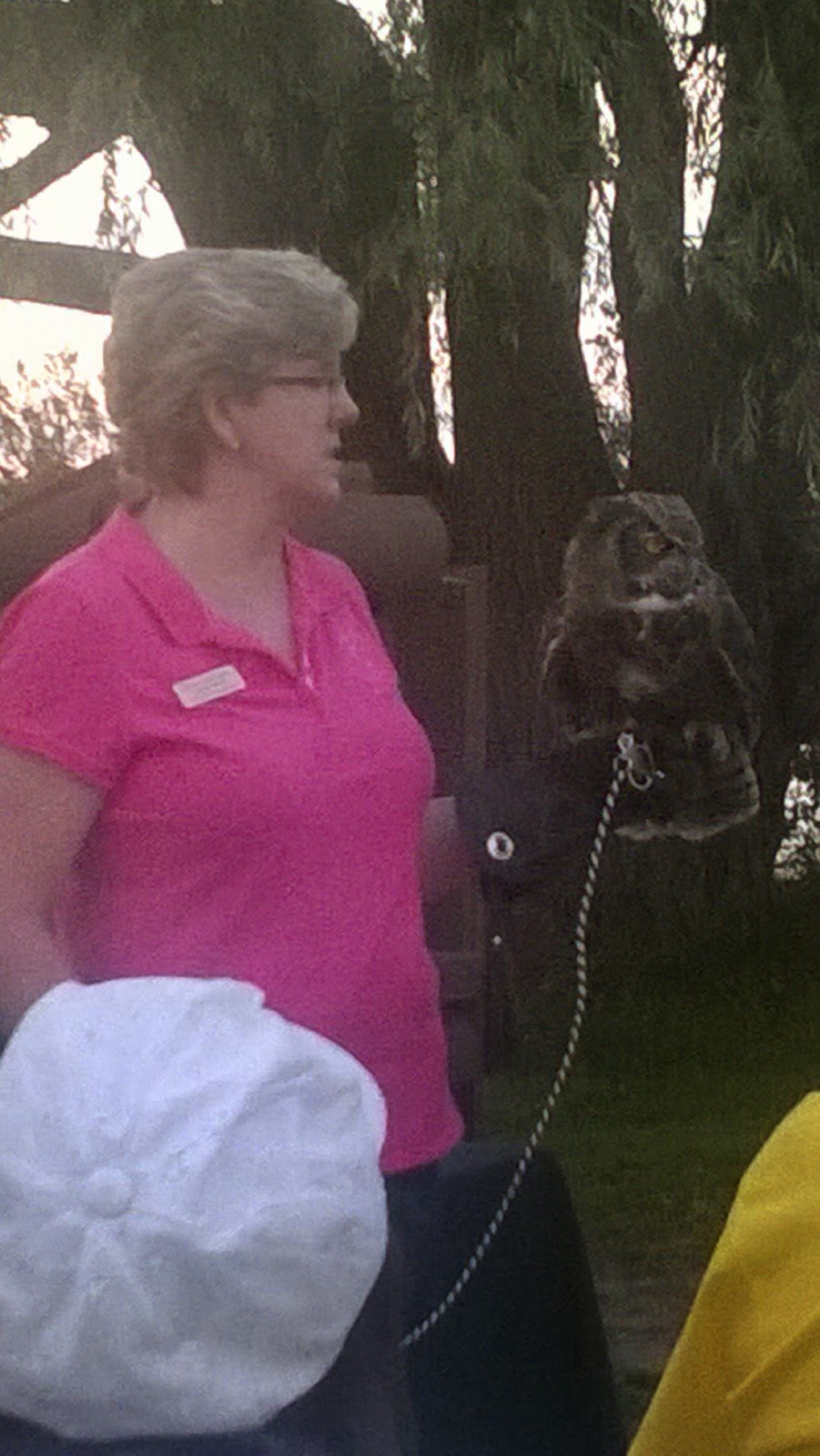 Afterwards Leslie let us come up closer for a photo op, and at the same time I got her permission to post these photos and information for her organization. 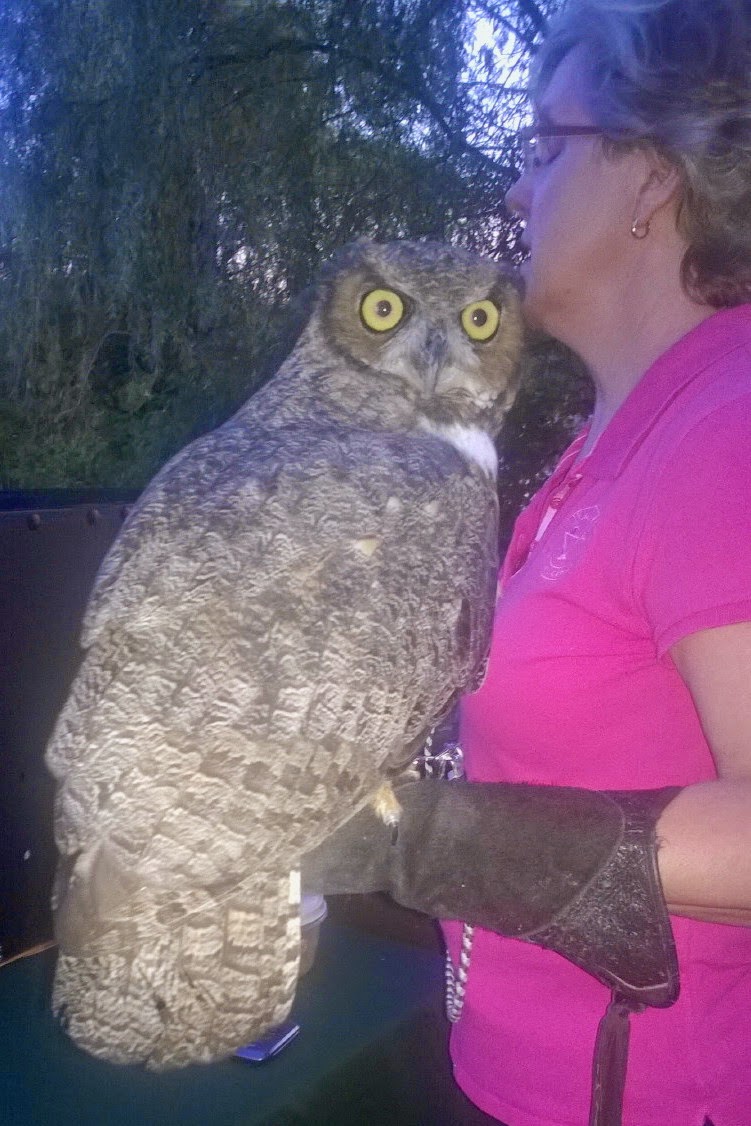 Wildlife rehabilitation is the treatment and care of injured, diseased, or orphaned indigenous wildlife, and the subsequent return of healthy viable animals to appropriate habitats in the wild.  At the Wildlife In Need Center we answer over 10,000 phone calls from people asking for advice or help with wildlife issues and admit over 3,000 animals annually.  We also conduct educational programs in schools, for scout groups, and for church and civic groups.
The Center is run primarily by volunteers and a very small staff, operating 365 days a year.  We receive no funding from county, state, or federal governments.  We run extensively on private contributions, primarily from individual donors, but also from corporate foundations and private foundation grants.


After the program was over, the sun had set. 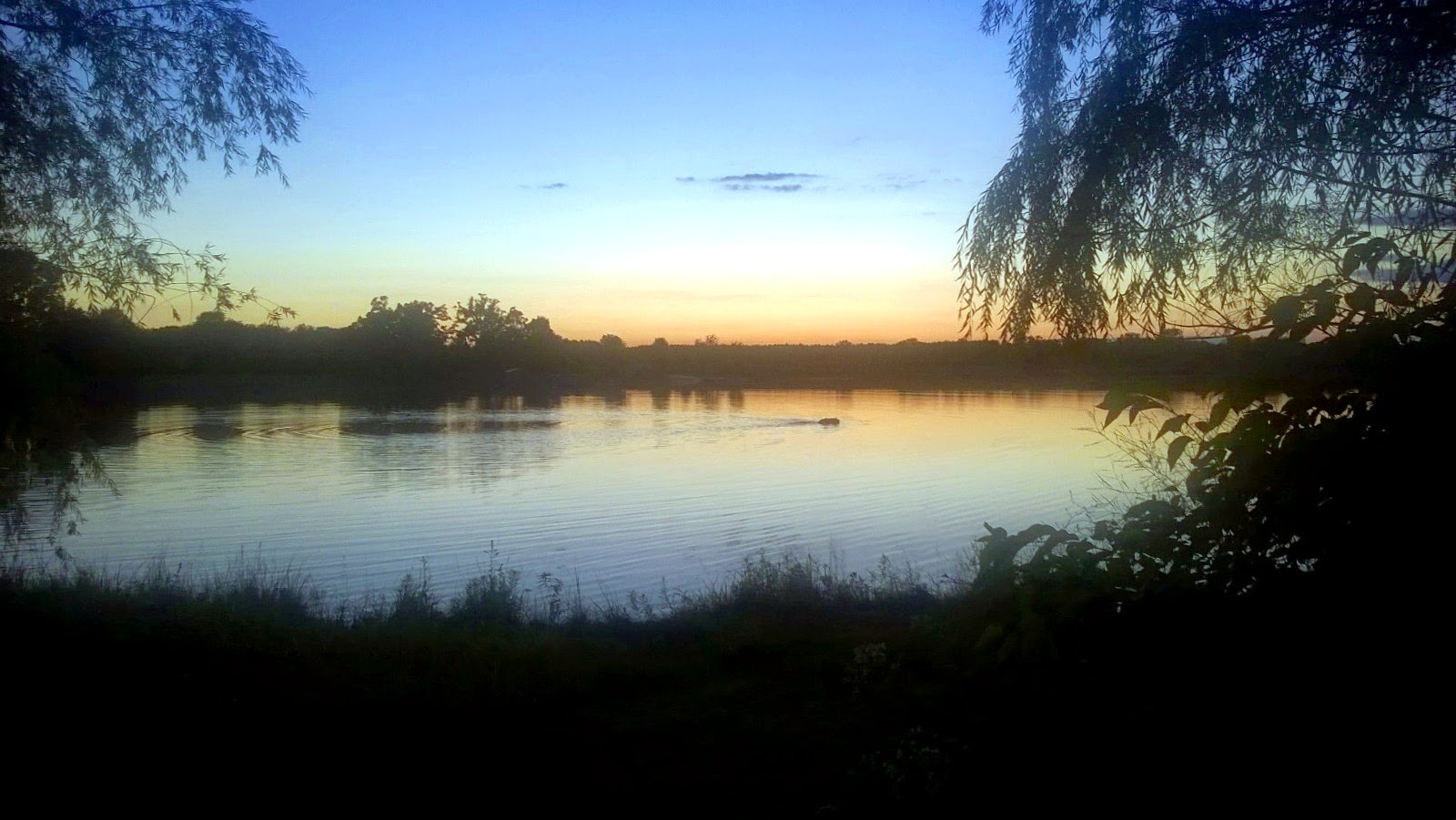 We were invited to come sit around a group campfire with some of the other host from other parks. We shared hosting stories, favorite campground stories, and other bits and pieces... and a few jokes too.  By 10 p.m. we were ready to toddle off to bed. 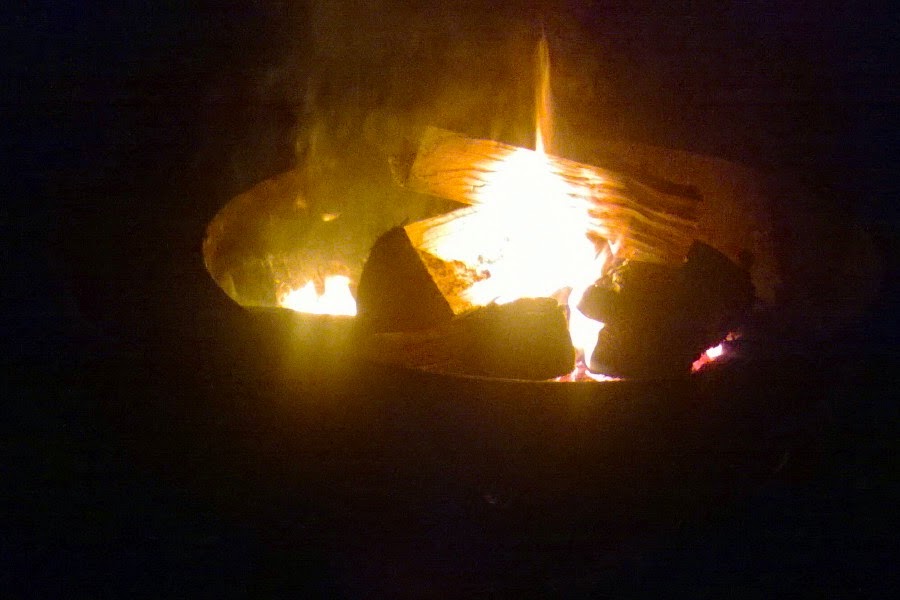 Tomorrow will be a busy day...
Continental breakfast at 8
Morning programs and speakers
Box lunches
and then we are booked for a canoe trip!

Posted by KarenInTheWoods at 11:29 PM