You might wonder what a toilet riser has to do with an electrical outlet?  Well, nothing.  But I just happened to put them both in the same blog post title!  LOL


As most of you know, RV toilets leave a lot to be desired compared to household toilets.  Some RV toilets are all plastic, and some are ceramic.  Many are too short!  We have Sealand Ceramic Bowl toilet made by Thetford.   It's pretty short.  With Steve's long legs, plus I am 5'7" myself, a taller toilet would be preferable.

But not to our two 2 year old grandsons who are just toilet training... to them this height is "just right"  hahahaha ....


I digress.
Back to the toilet height situation.
See what I mean? 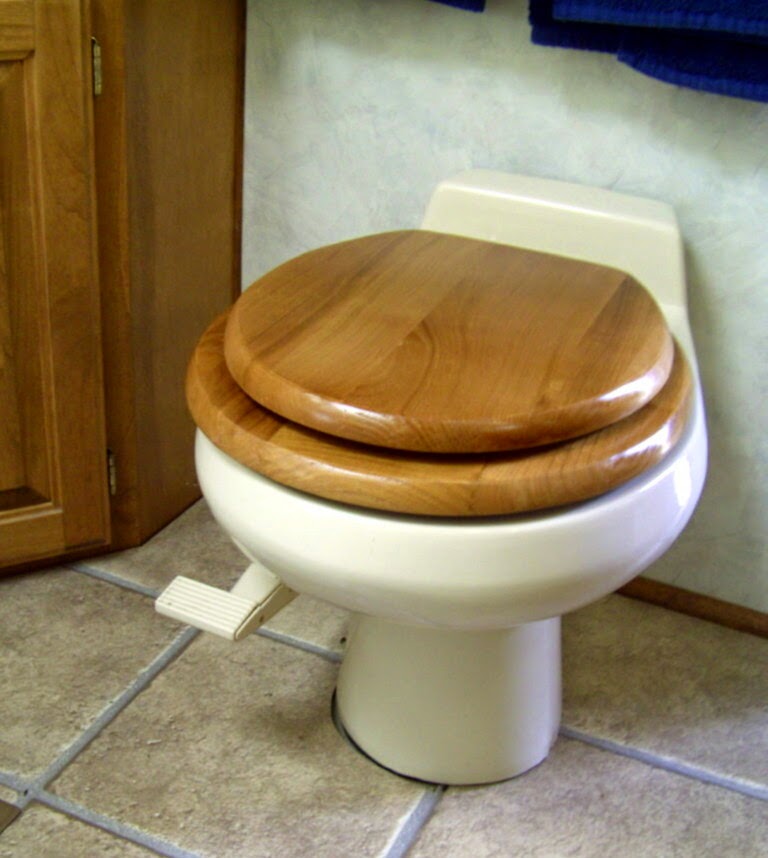 Pretty short.  Squatty.  Kinda "knees to the chin" situation, according to Steveio.

Well, the RV suppliers do make a "toilet riser" which is a large sturdy plastic deck unit designed to add a couple inches in height to the toilet without too much modification.  They are costly.. in the $40-50 range plus shipping.  Oh my.

So we kinda figured someday we would get one.  Perhaps.

Well, a few weeks ago, we were walking in a thrift shop in the next town over... and what does Steveio see?  An RV Toilet Riser!   Brand new, in the box, unused, etc.  And it just so happens to be the right one for our model of ceramic Sealand toilet by Thetford!   For......  (drum roll please)  a mere EIGHT dollars!

The directions seem pretty straightforward.  The only drawback, it is white.  Our toilet and sink and tub are ivory.  Oh well, we picked up a can of Krylon spray paint for plastic called Fusion.  We have had good luck with painting plastic things and it clings well and doesn't flake off like regular spray paint does.  I did my spraying while Steve started gathering supplies. 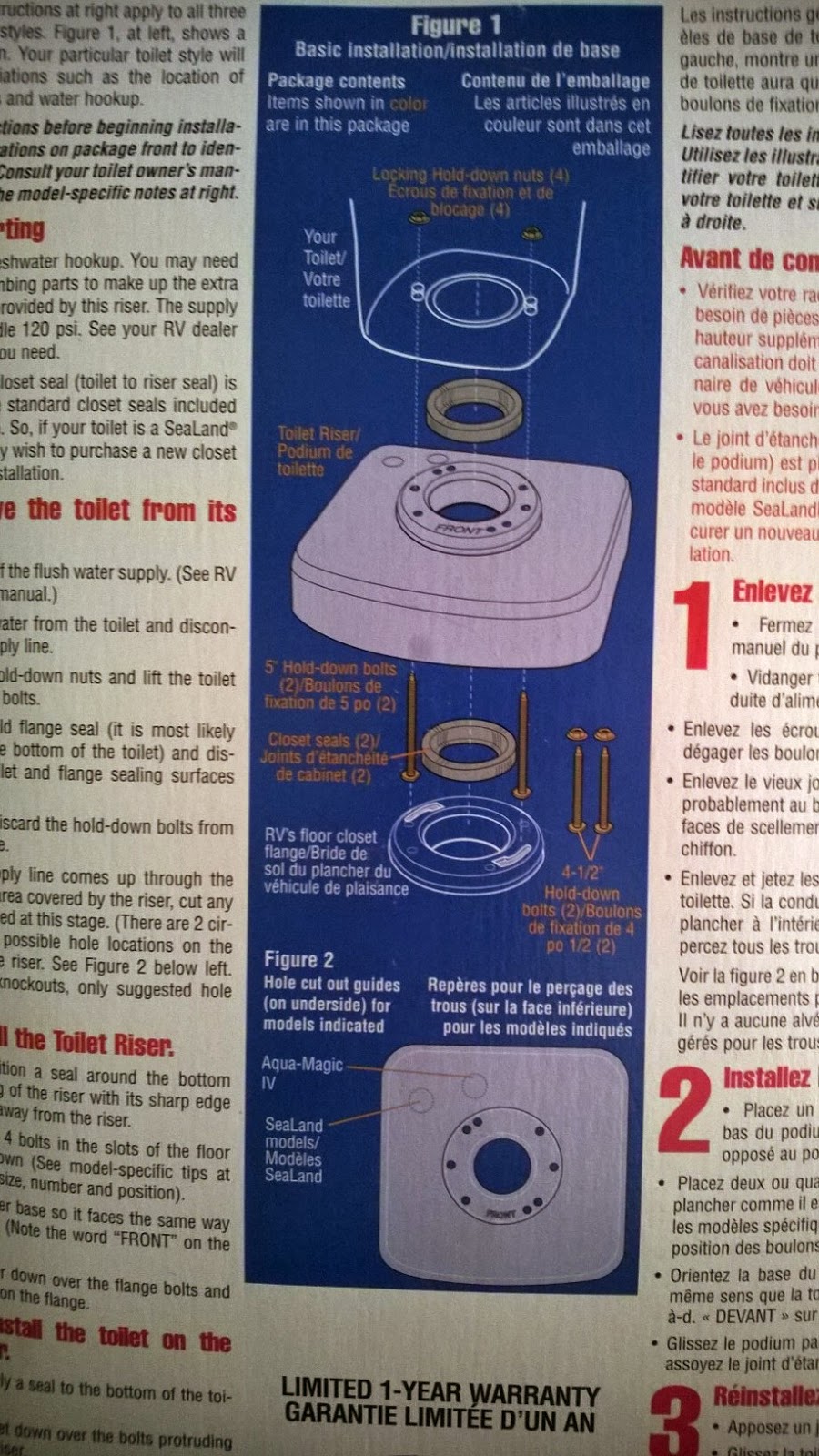 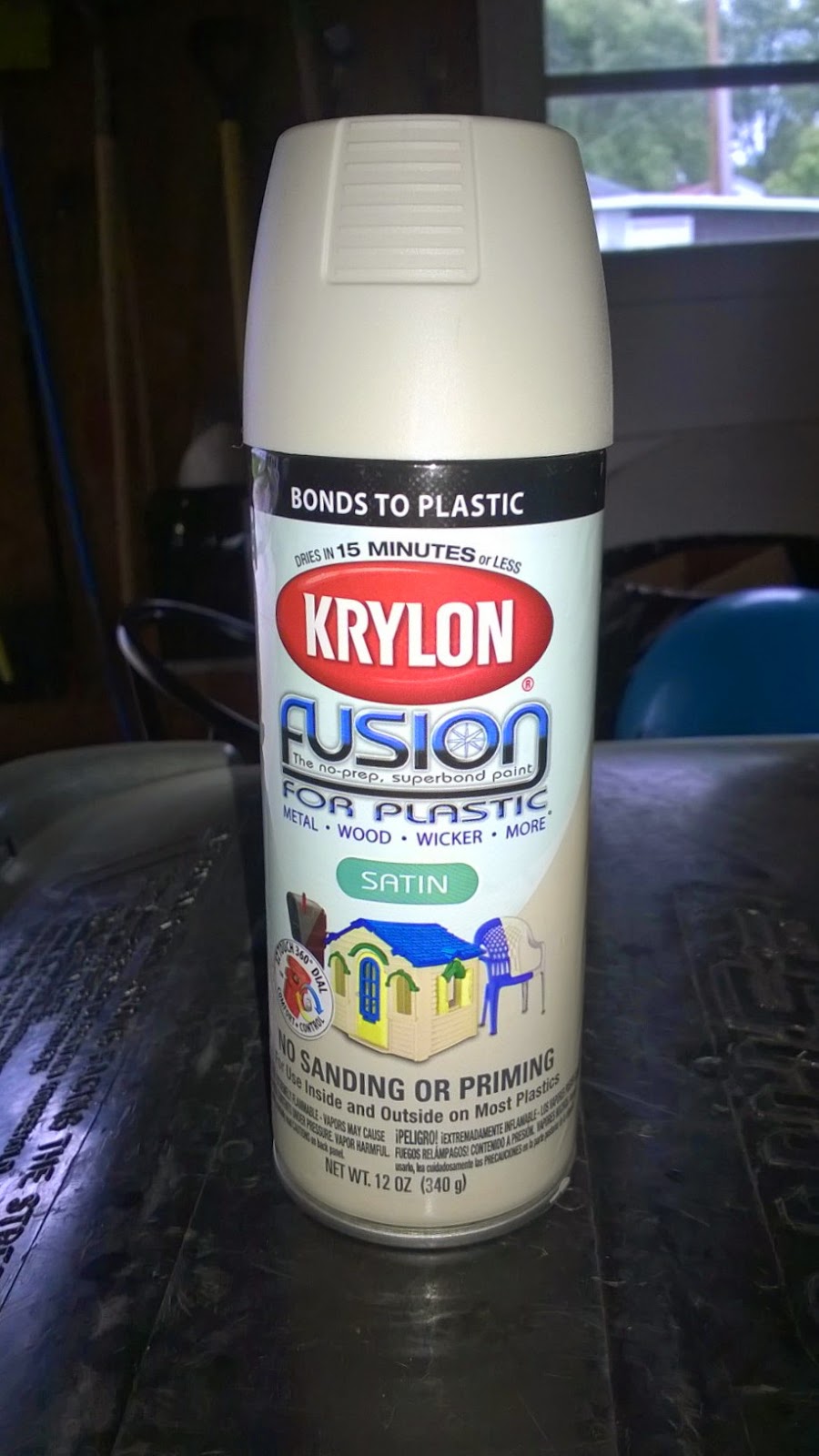 First step... dump and rinse your holding tank very well.  We had done that on Thursday because we knew we were going to do this job sometime on the weekend.  Add a big dollop of toilet chemical like the porta-potty units use to help mask any odors while the toilet is off the mounting bracket.

Next: unhook the water line and remove the plastic shroud around the base of the toilet.
Also remove the cover on the foot lever on the left side.... 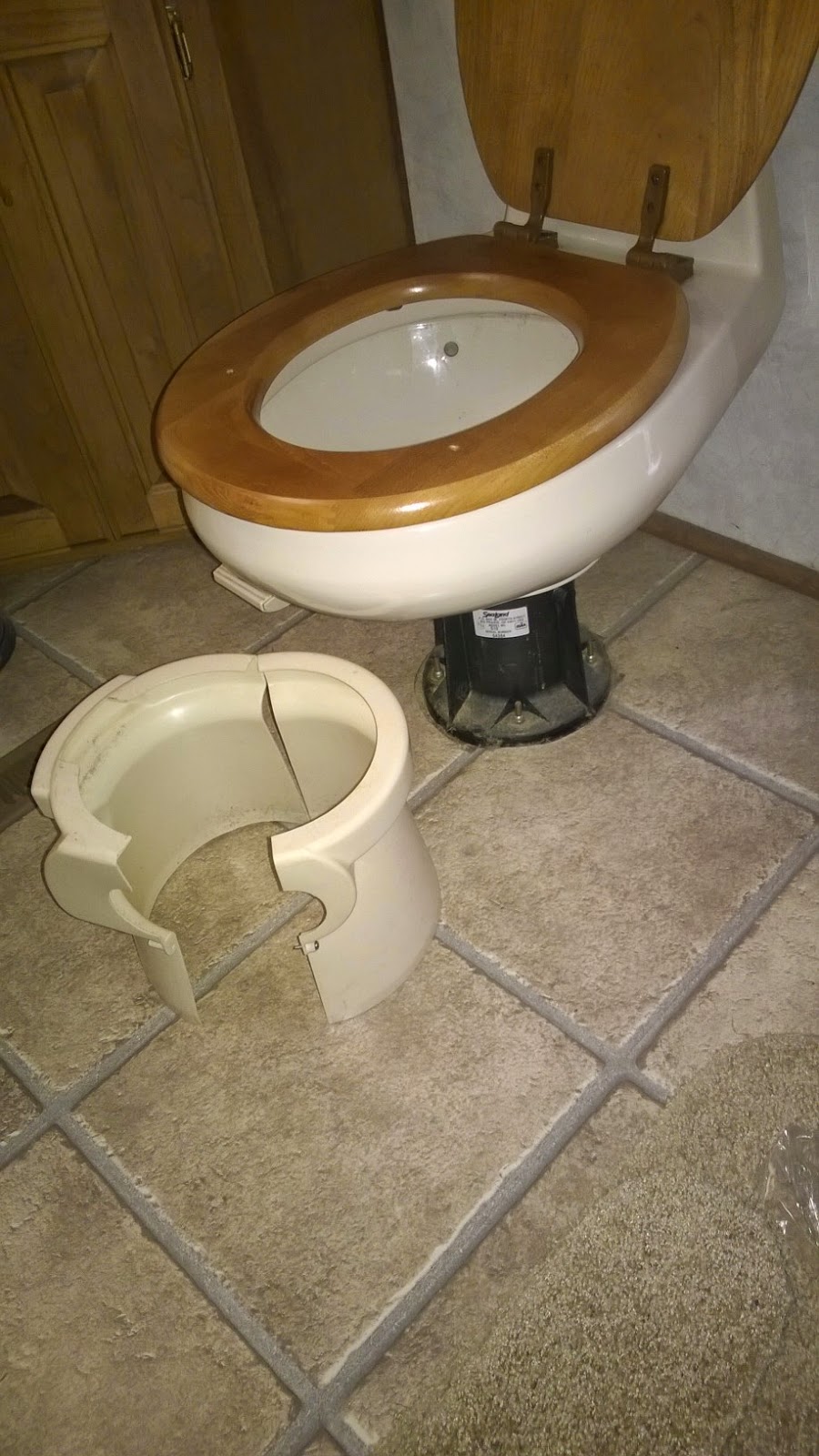 We had changed over the flooring about 5 or 6 years ago, and had removed the toilet in the process. The flange nuts were easy to remove and not rusted up on an 18 year old toilet.  Easy peasy they came loose and the toilet was lifted up and off the opening. 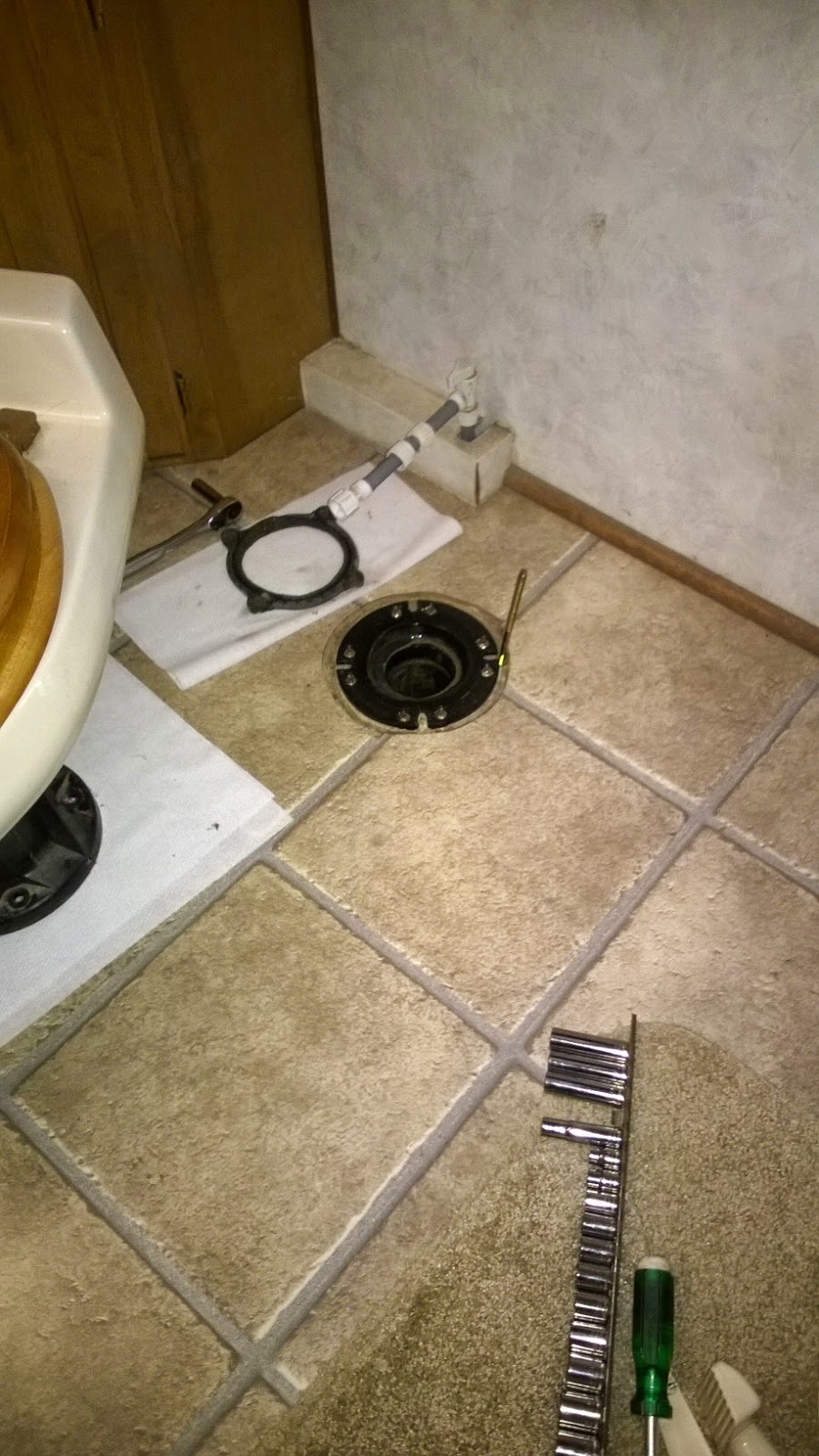 No smells, but we had the windows open just in case.

Quick cleanup with some disinfectant and we were ready for the next step of adding the bolts.
This kit comes with extra long bolts to replace the four original ones.  Slide them into the flange. 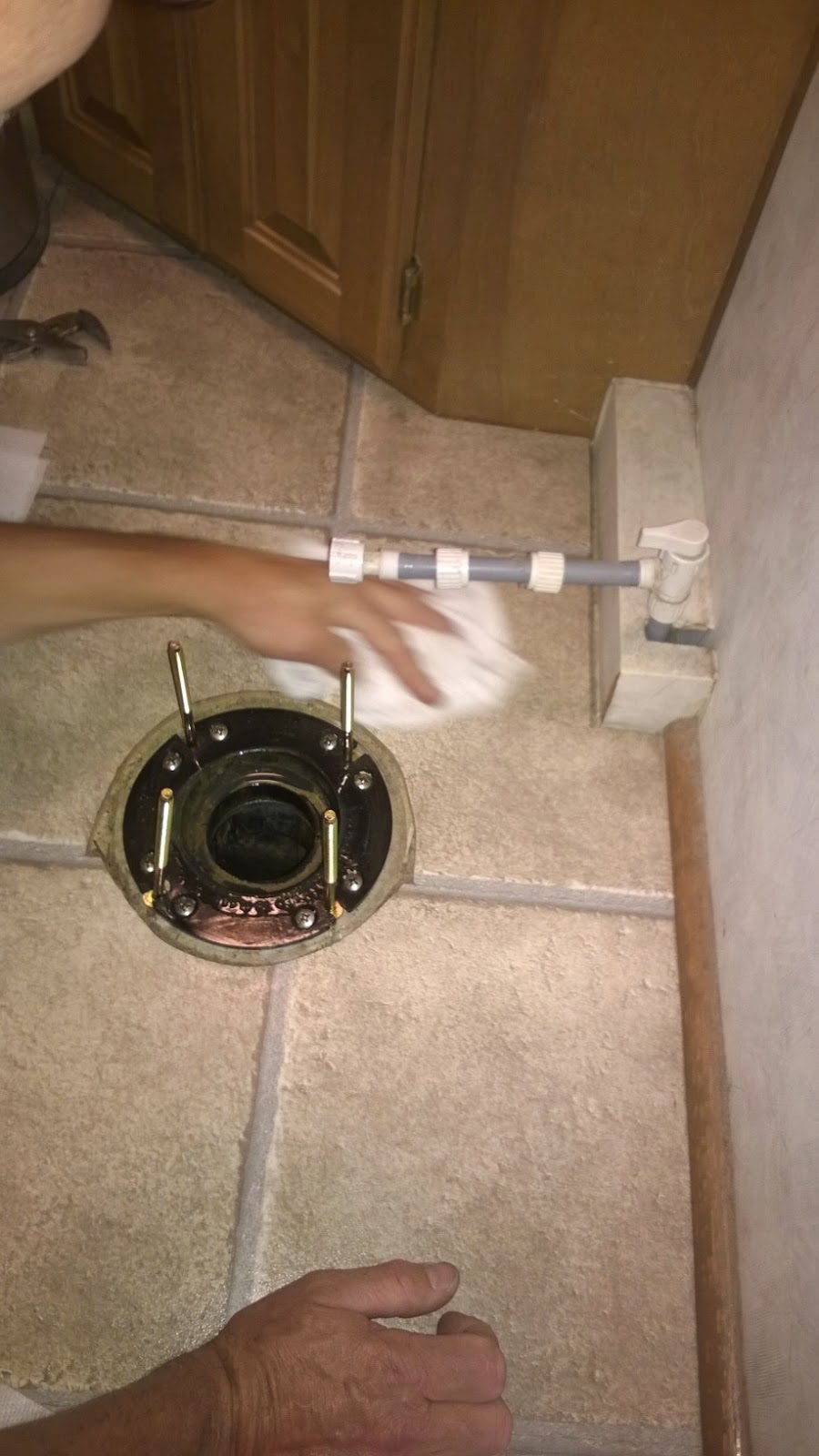 This kit came with two rubber gaskets to put below and on top of the riser.  We decided to reuse the original gasket on the top end because it fit better than the universal one in the kit.  Now on the bottom portion, we decided to use a traditional household type wax ring instead of the gasket.  Remember I said we had added a new floor a few years ago?  We needed to make up that 1/4" difference in height, and the wax ring would do that very well.


Add the wax ring (or the rubber gasket if you choose) to the bottom of the riser opening. 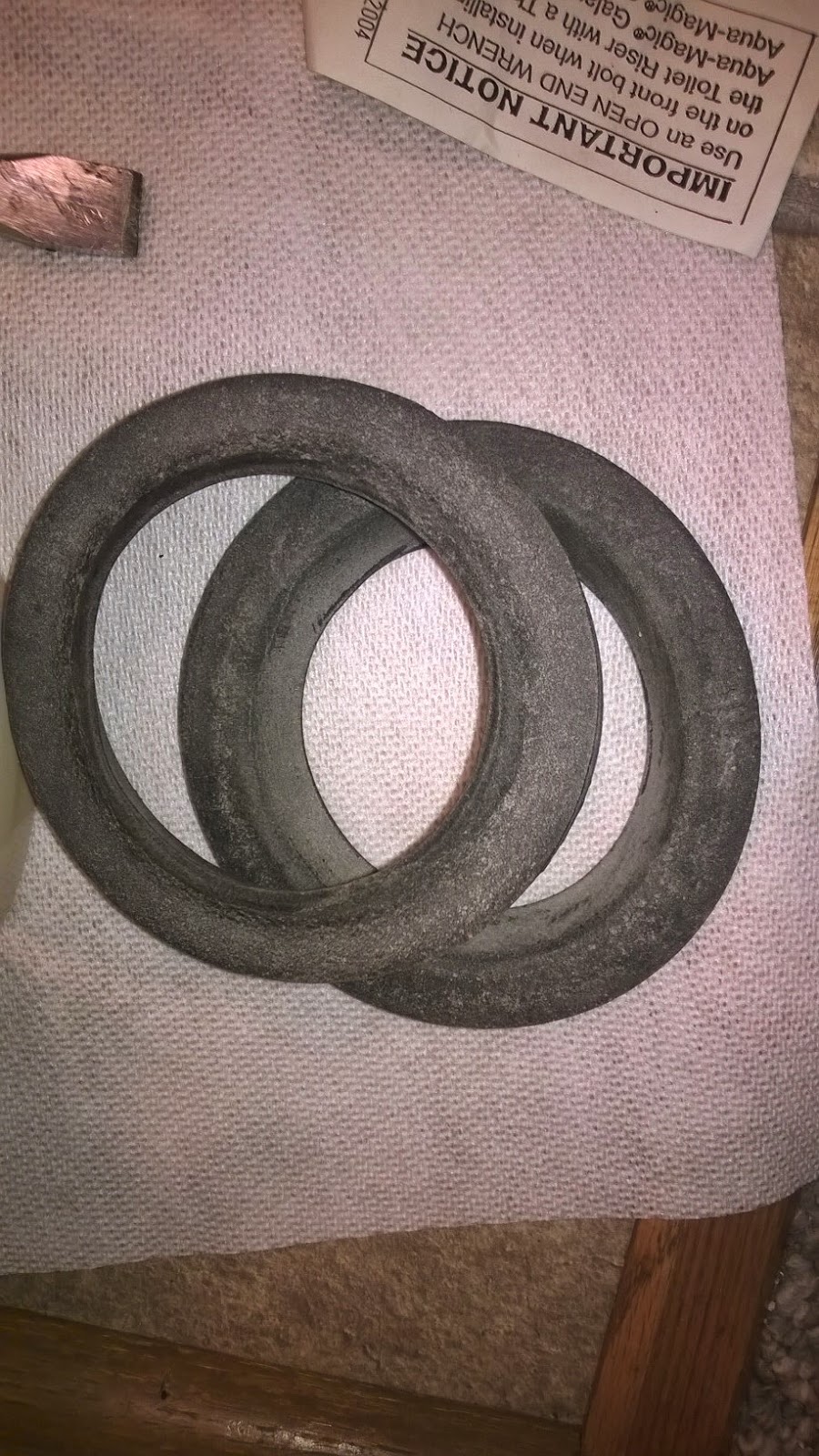 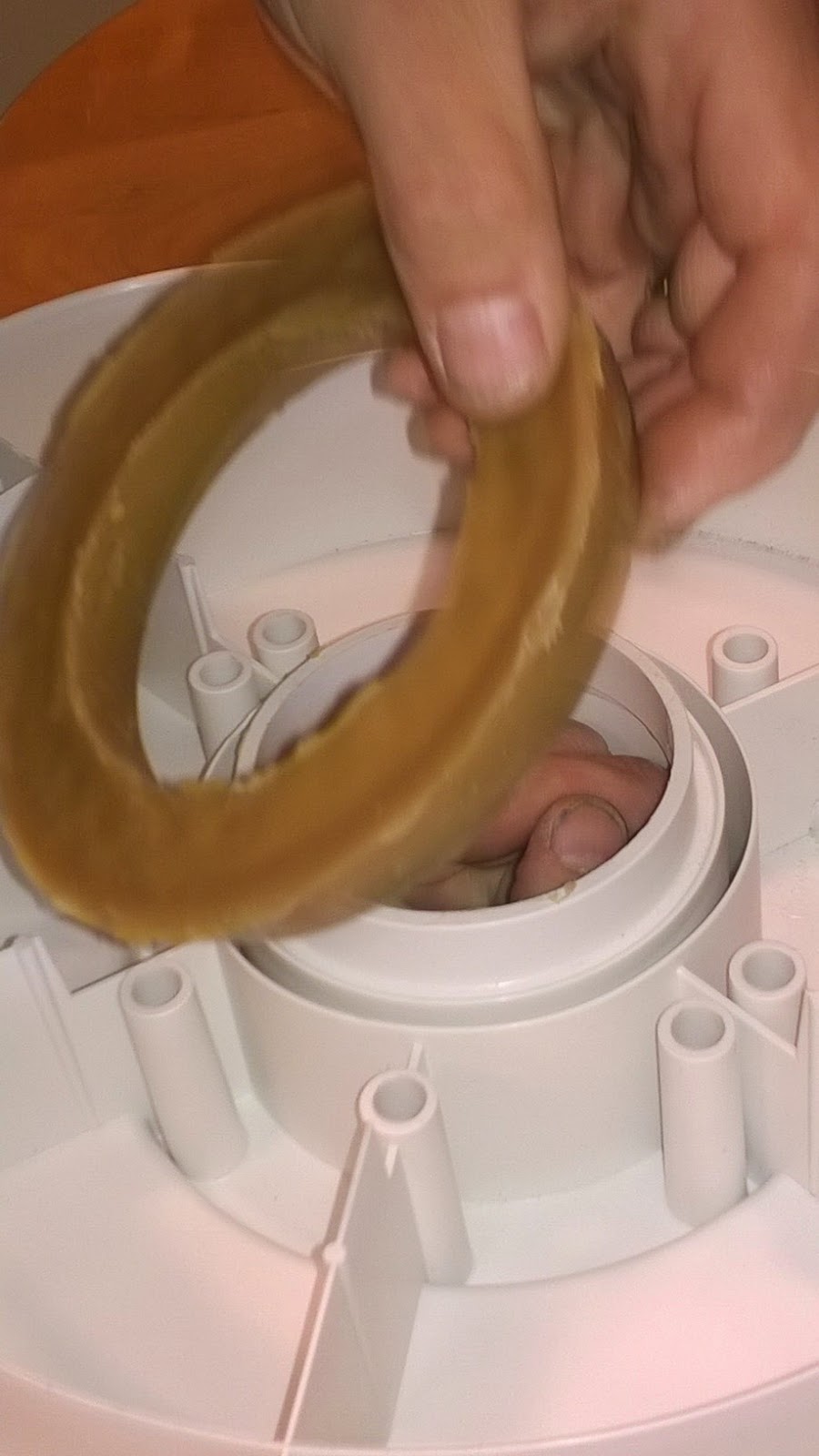 Now carefully line up the heads of the four bolts into the four holes
and drop the riser straight down over the opening.
Squish it down a bit to set the wax ring onto place. 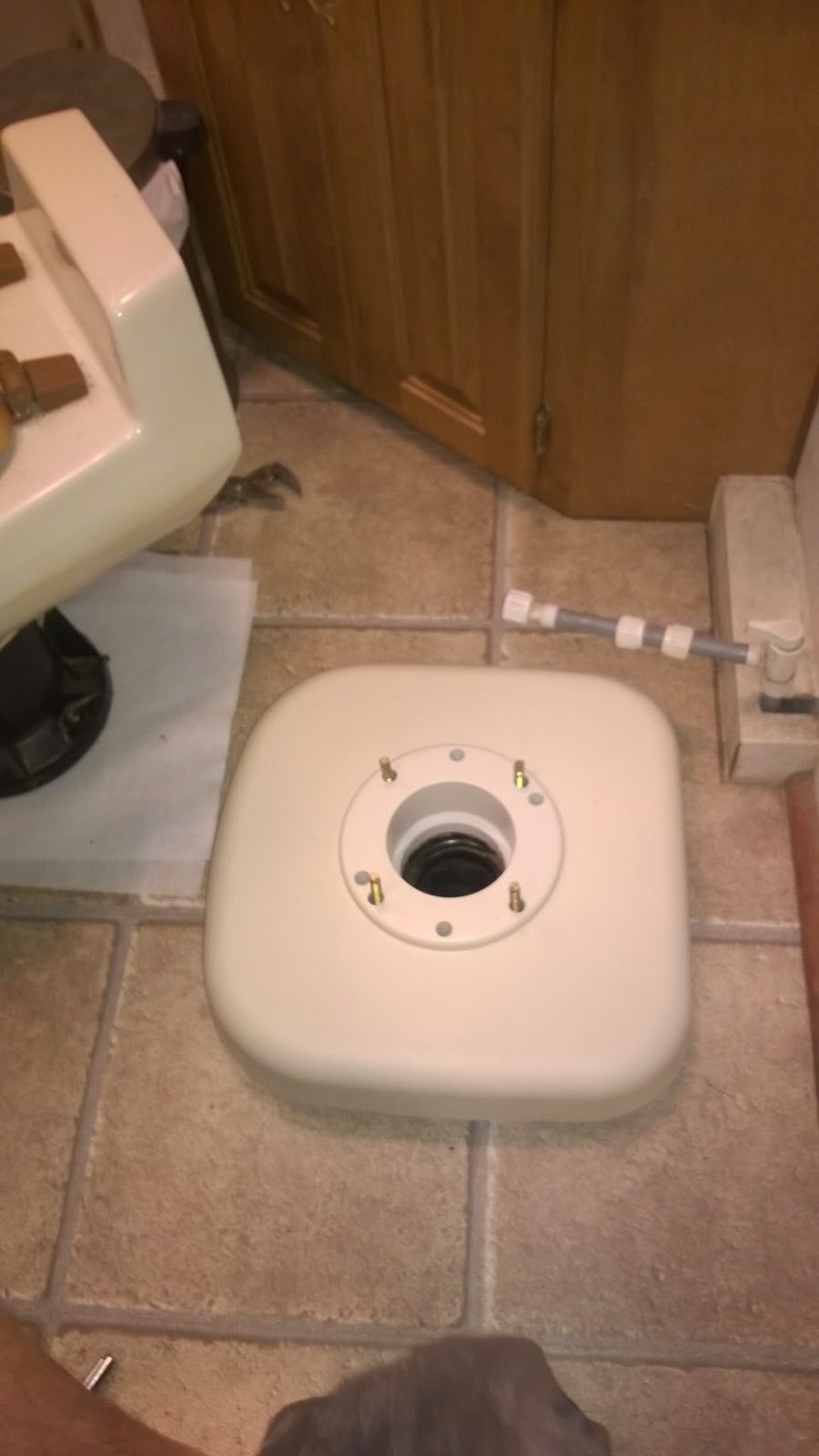 We carefully placed the toilet over the riser, with the four bolts lining up with the four holes on the base of the toilet.  Once it was in place, we added the four nuts and started to tighten them down. 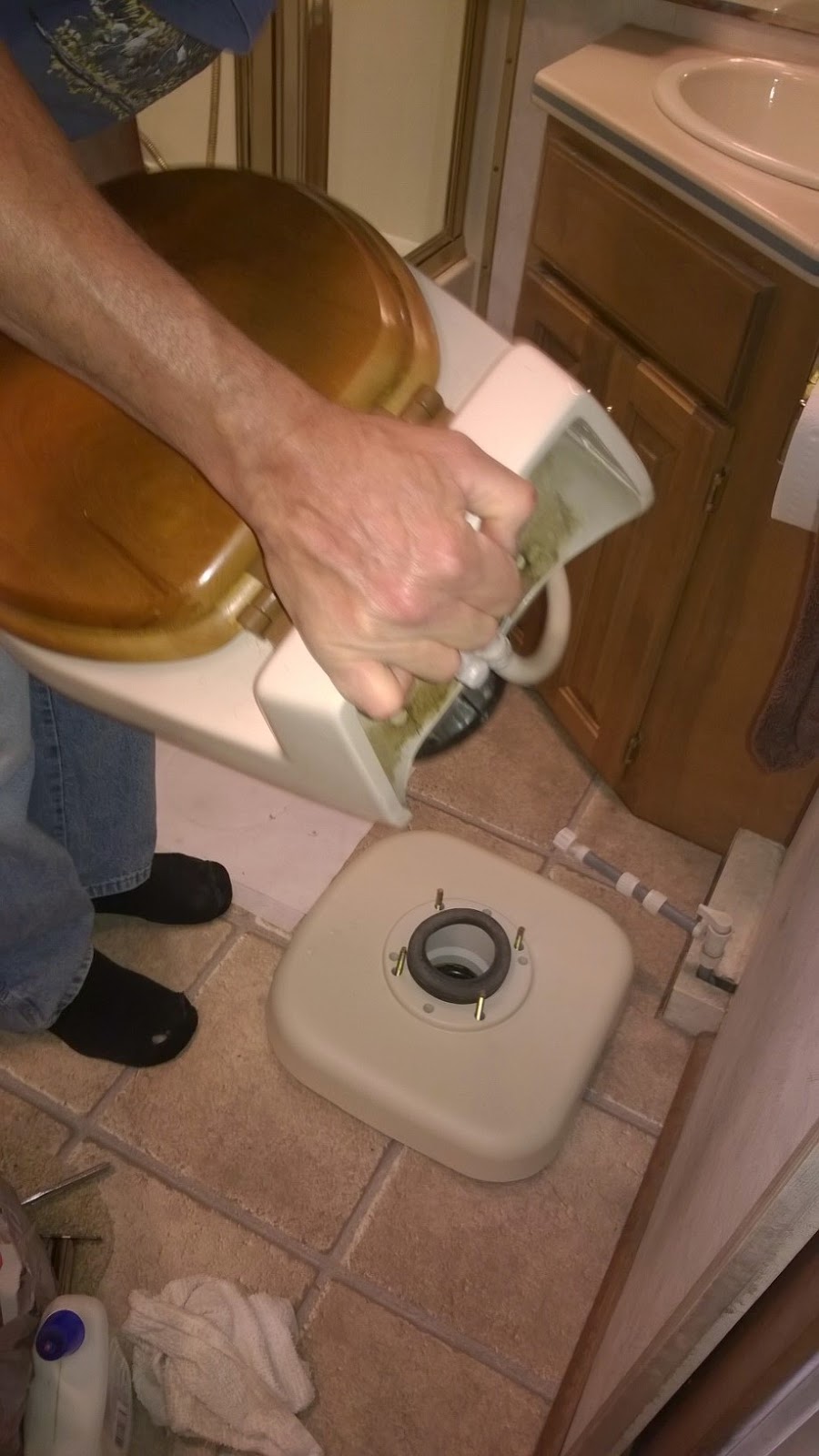 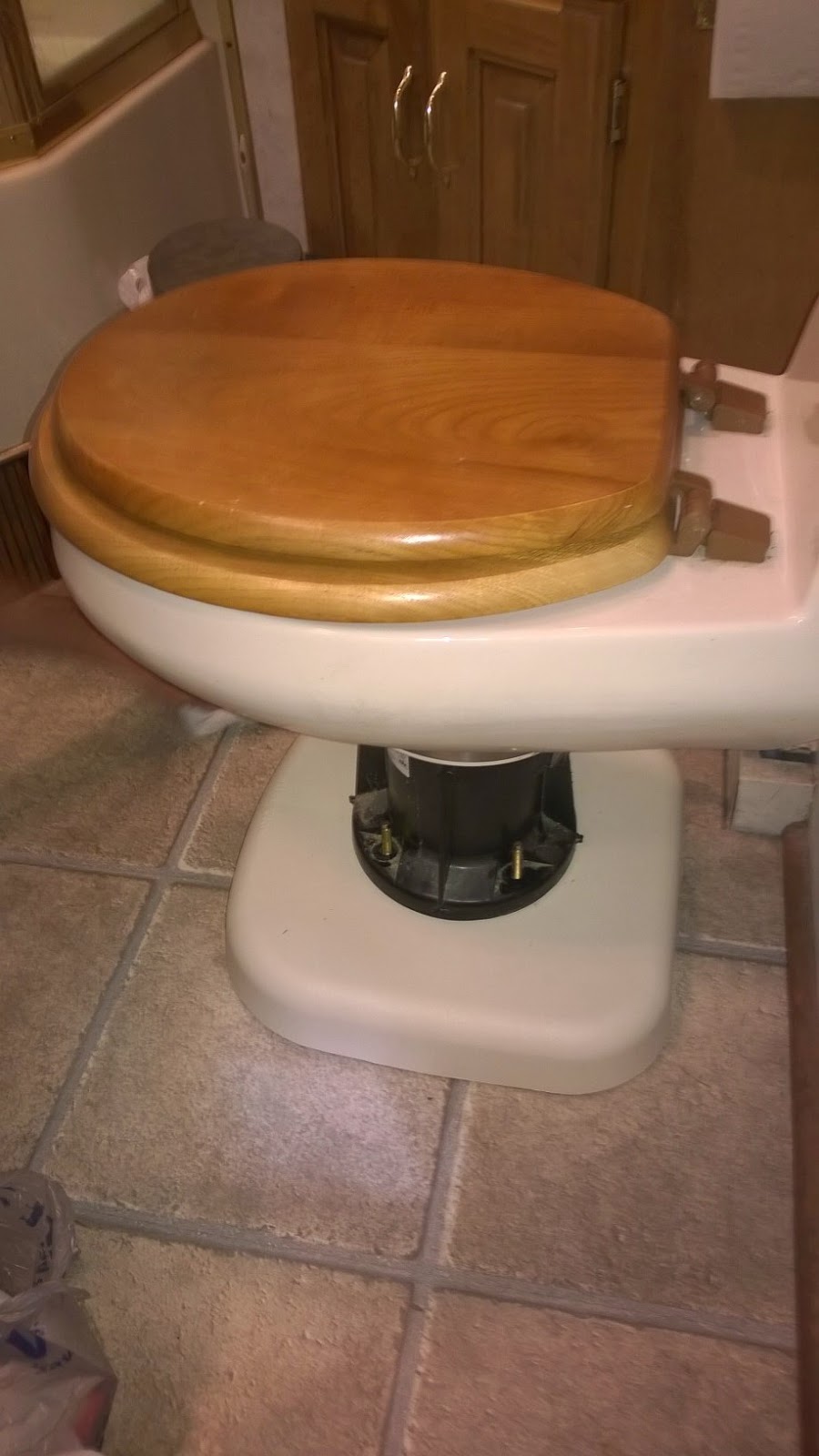 Once it was stable and sturdy, we attached the extension to the water line we had to adapt, and then the lever cover and finally the plastic shroud around the base.  Done! 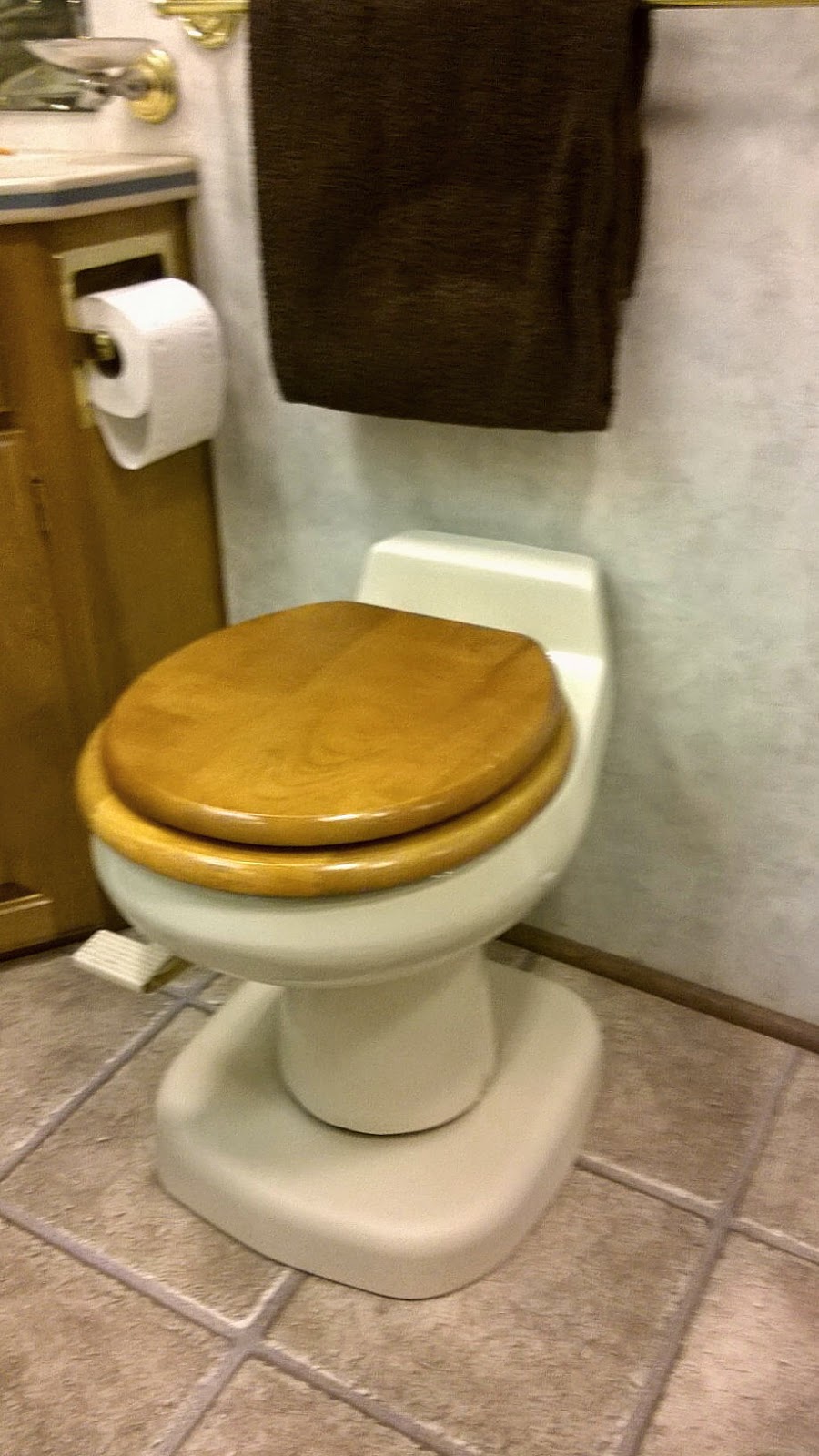 And yes, we both gave it a "test drive" and it meets our expectations.
I bet our grandsons are going to be mad at us though.


The other job I wanted to post on this blog was a small one, but one that I have been asking for about a year or so now.  Since we took out the couch, and added the loveseat, we often sit side by side on the loveseat, each with our own laptops.  Ain't that sweet?

But what isn't sweet is that my laptop cord has to stretch across the aisle from an outlet up by the passenger seat dash!  When it is fully stretched out to it's farthest length, the cord gets yanked out by accident so often that my plug end is kinda wobbly in my laptop port now.   Steve's laptop cord is stretched across the aisle in the other direction and  plugged in by the kitchen table.  We trip over it if either of us walks to the kitchen or the bathroom.  Our batteries don't seem to last too long, so want to keep our laptops plugged in while using them.

Time for a change.  I wanted another electrical outlet added to the wall alongside the loveseat.  You can't run wiring inside of the exterior motorhome walls, they are solid styrofoam and no way to run additional wiring once they are closed up at the factory.  But you can run along inside of cabinetry and to the side walls. See the arrow??? I want an outlet right down in the corner there! 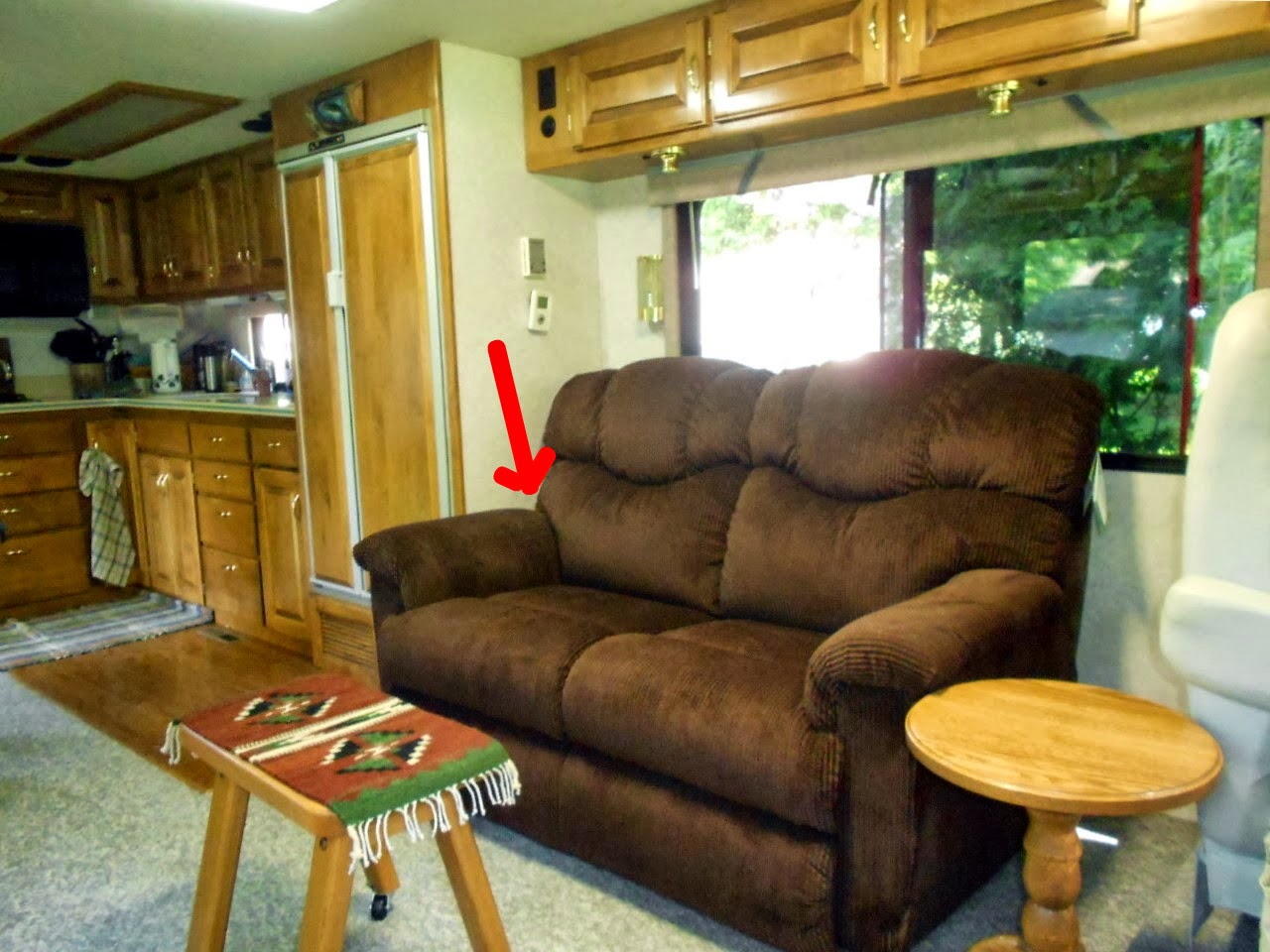 Steve examined the existing motorcoach wiring.  We wanted a power source that operated when our inverter was on, (from our batteries and solar power that inverts it from DC to AC current) ... The nearest power source was on the other side of the fridge and one outlet in the upper cabinet. No luck, those are both only operational if on shore power. (plugged in to a campground post or household power in the yard)

But wayyyy back in the other corner of the kitchen cabinet IS a power source that operates from the inverter circuits.  It's actually an outlet inside of the cabinet next to the stove that operates the igniter for our propane cooktop.  One of the two outlets is unused.  Hmmmmmmm  Steveio started thinking.

By plugging in a heavy duty extension cord (12/3) into this outlet, and running it along behind the cabinets, through the partition under the fridge, he could run the heavy cord to a box down alongside the fridge and make an outlet!   We had a wooden panel there already with a furnace vent in it.

Steve removed the wooden panel and cut a rectangle into the wood. Behind it he mounted an electrical box and wired into it the grounded three prong outlet for our laptops. It's like a big heavy extension cord running over to our loveseat behind the cabinet drawers. How cool is that? 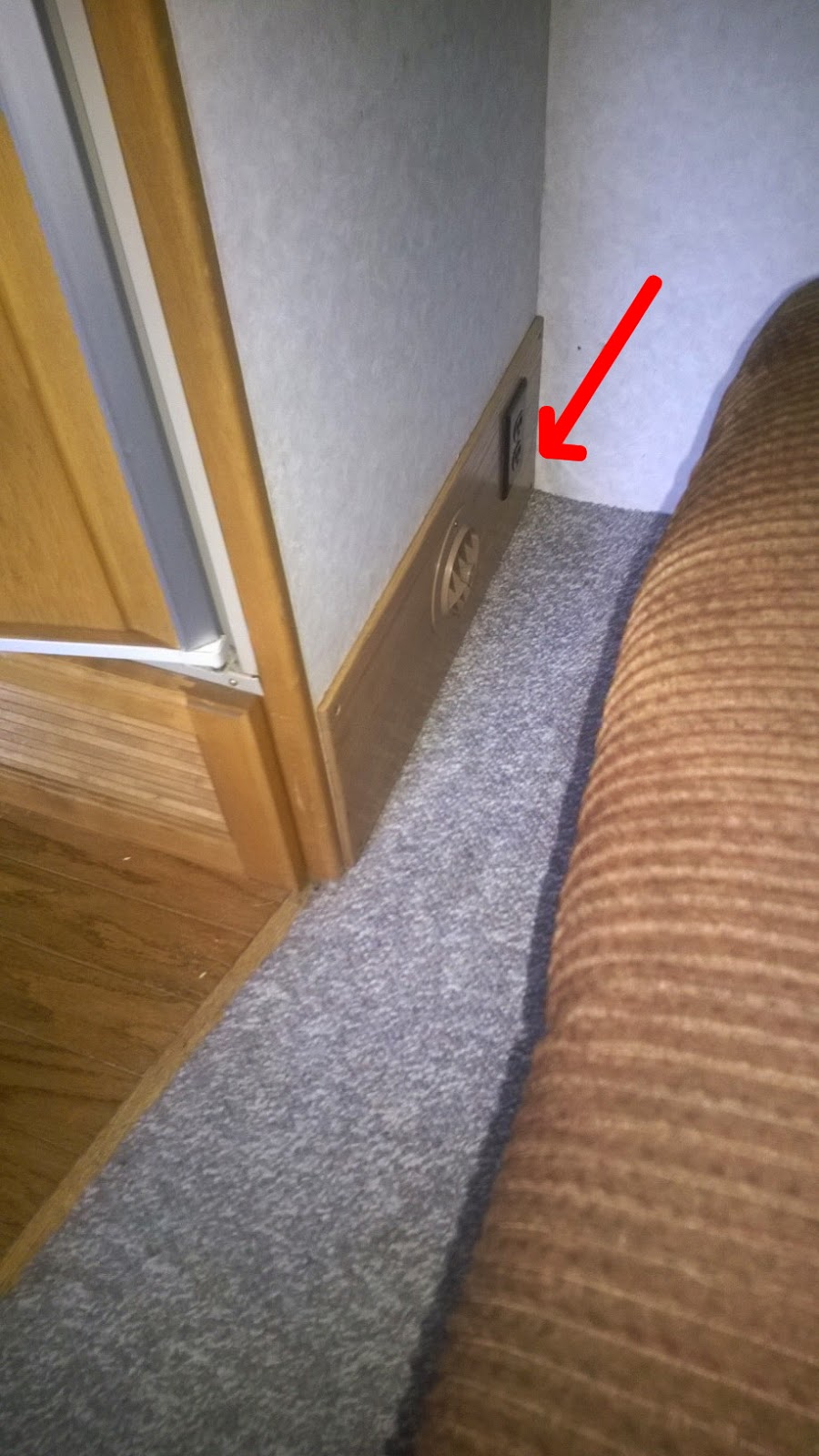 Now we can plug our two laptop cords alongside the loveseat to the little coffee table and not trip over the cords!  Good job, Steveio!  You made life even MORE comfortable in our motorhome. 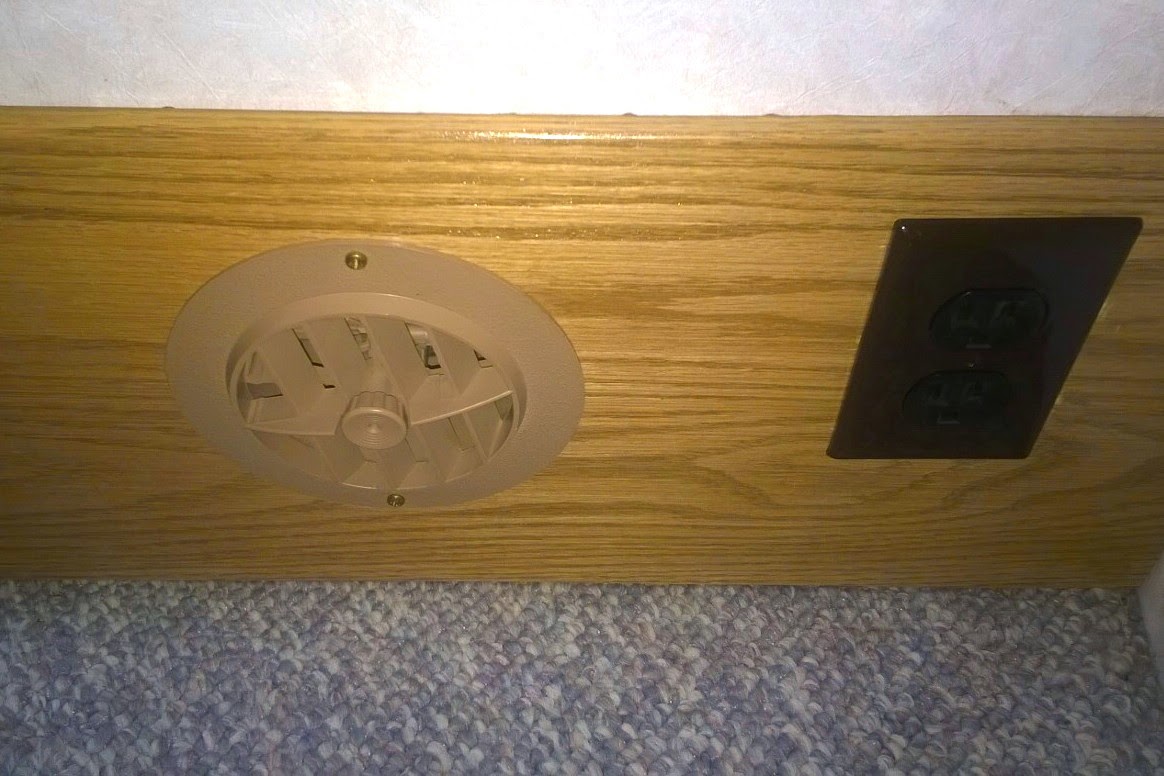 Well, the Packer Game is done.
We lost.

Since the rain earlier today had ended...
we took a nice walk with the dogs around the neighborhood
while the sun was shining.


Duke walks the first few blocks,
but then we load him into the red wagon
so we can finish the longer walk
with Finney trotting alongside. 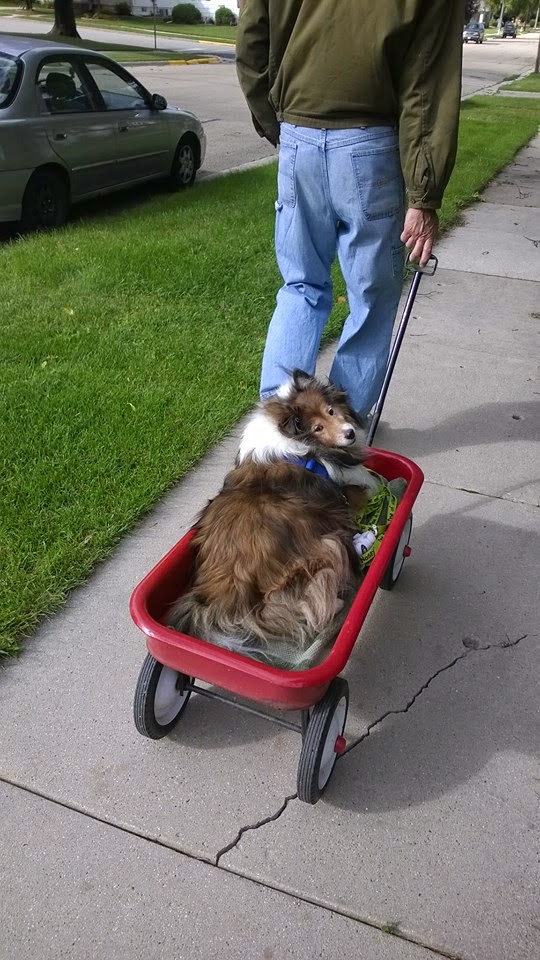 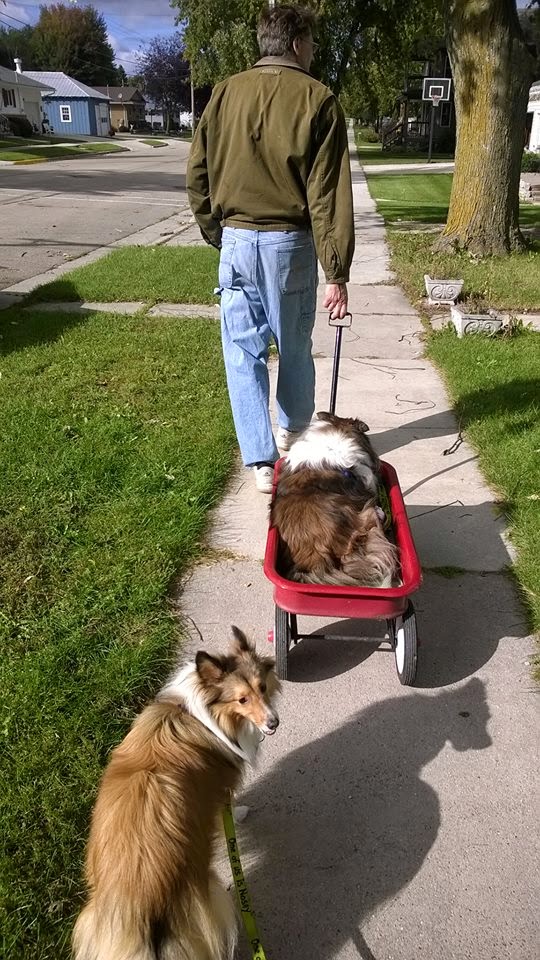 Posted by KarenInTheWoods at 5:46 PM