Our Safari motorhome has a cabinet in the bedroom that houses a big CRT type television.  We ousted that energy hogging tv long ago and have been using a much more sensible LED tv that uses a lot less power.  Important when you are a boondocker.  (camping without electrical hookups)

The cabinet has a large space that could be extra storage, but we have just been setting a DVD player and jamming in the LED tv at an angle when in use.  When travelling we take it out set it on the bed.

Here is the cabinet: 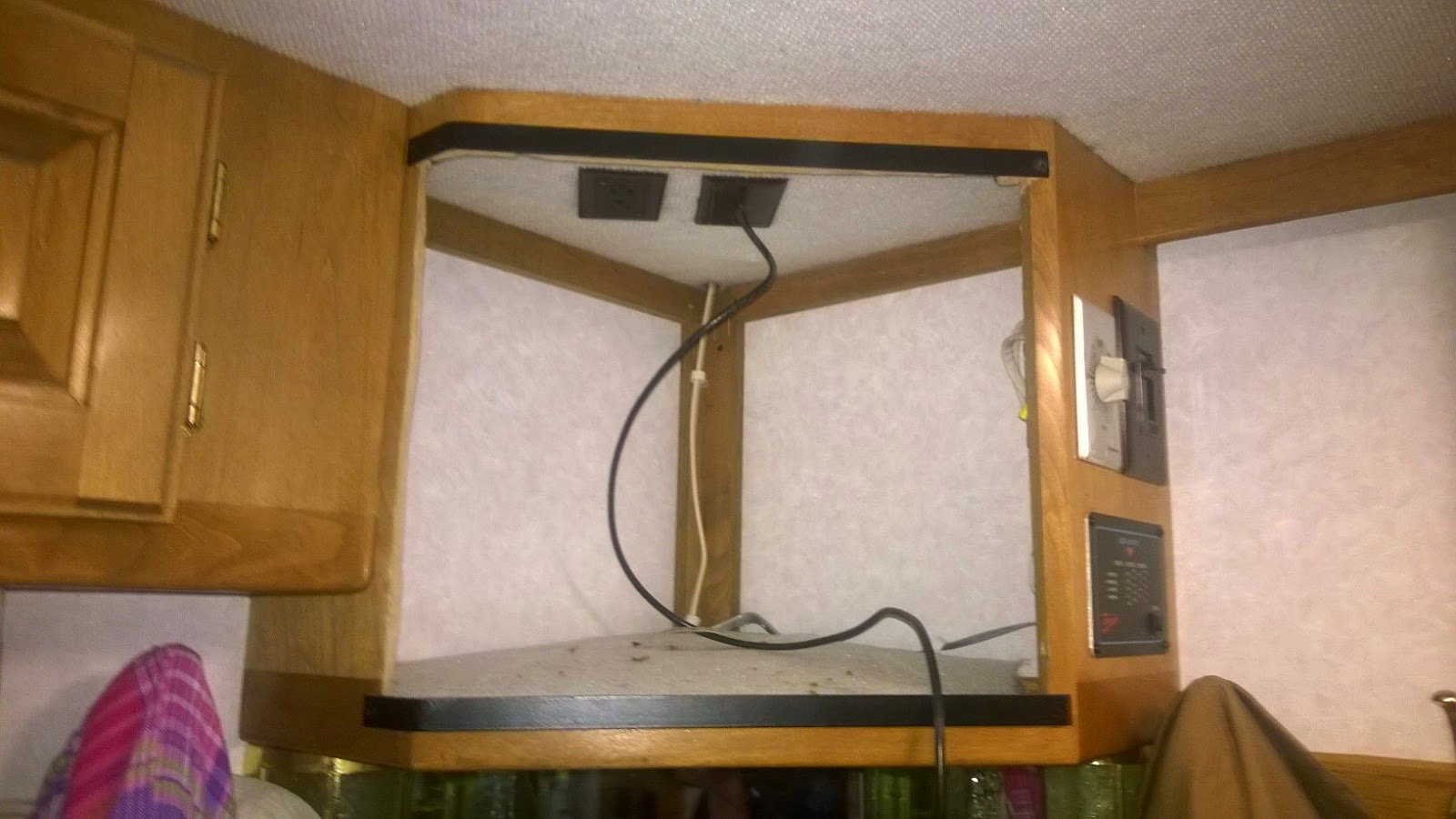 We had been looking at articulating tv arms that would allow us to move the tv out to reach the storage behind, or to tilt to have better viewing from the bed. Walmart's mounts were $129.00!!  Ouch!  But we were in Menards last week and found one for $35.00  It was made for a bigger tv than ours, but Steve assured me that we could make it work.  Somehow. 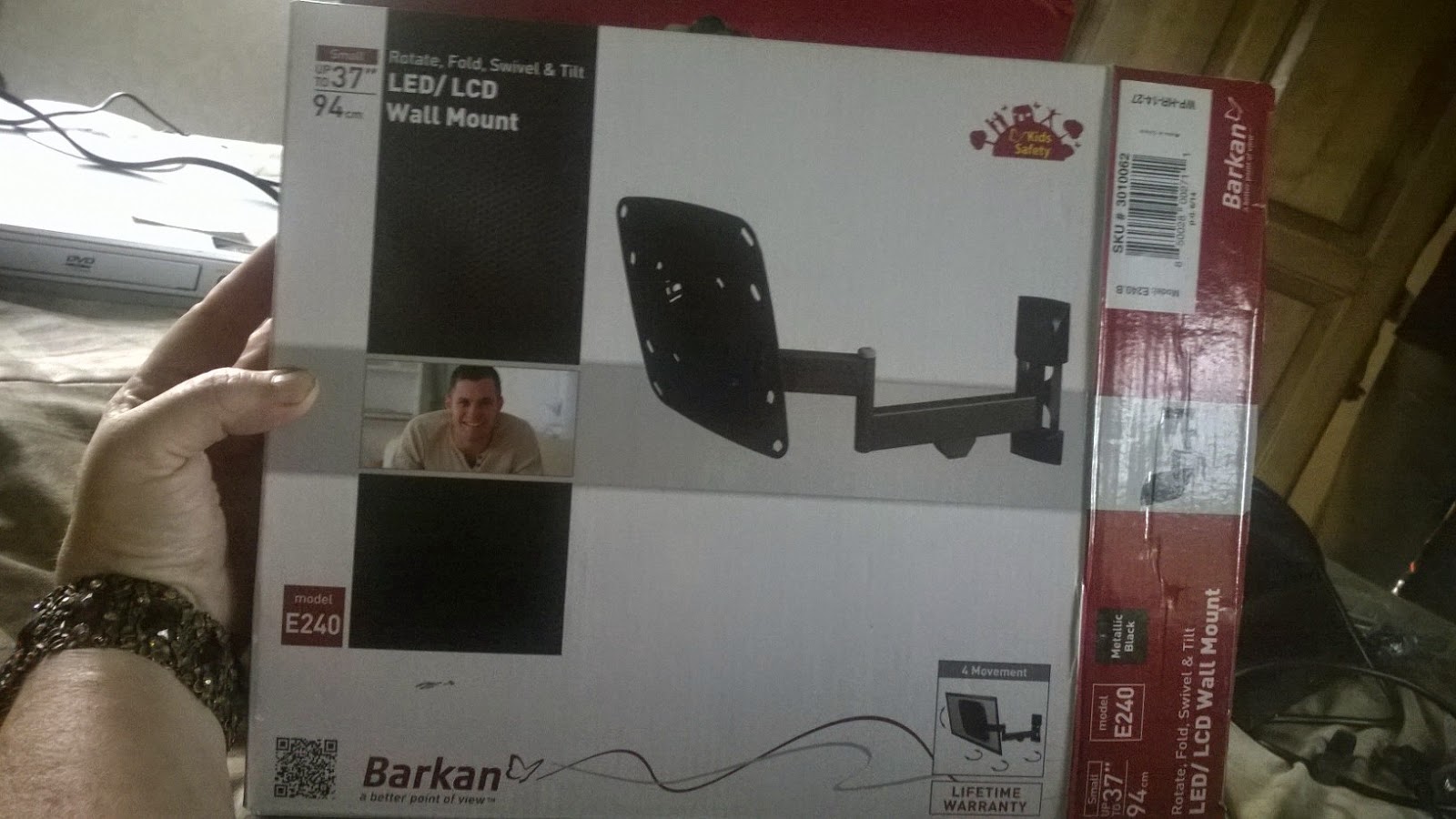 We took it out and laid it out on the bed...
hmmmmmmm
not only don't the holes match up, but the back base plate doesn't line up with our tv! 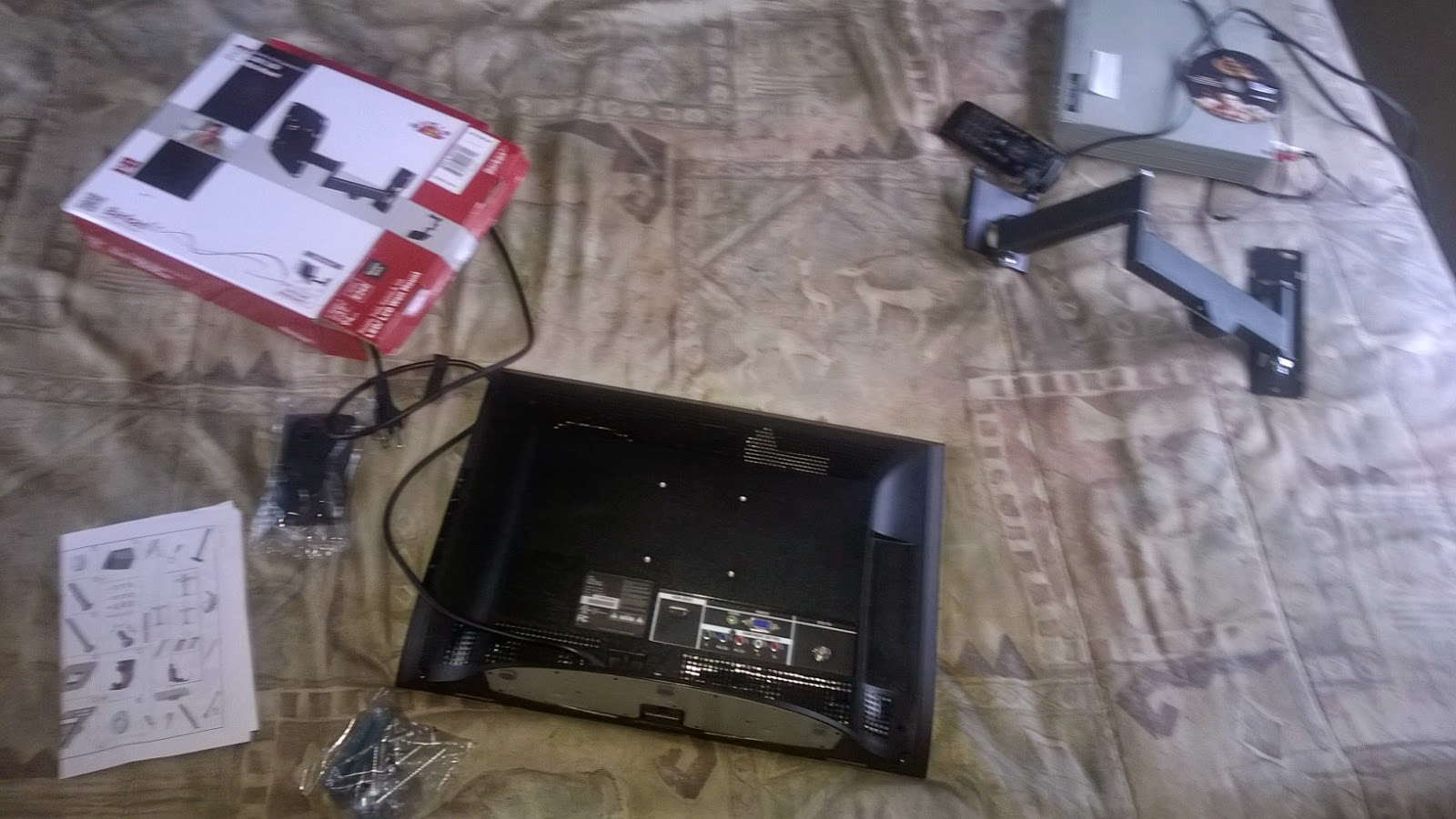 Steveio took to solving that problem!  He lined it up and figured where the base plate needed to cut off the top edge that would be overhanging otherwise.  He marked where new holes needed to be drilled in the base to work with our particular brand of tv. 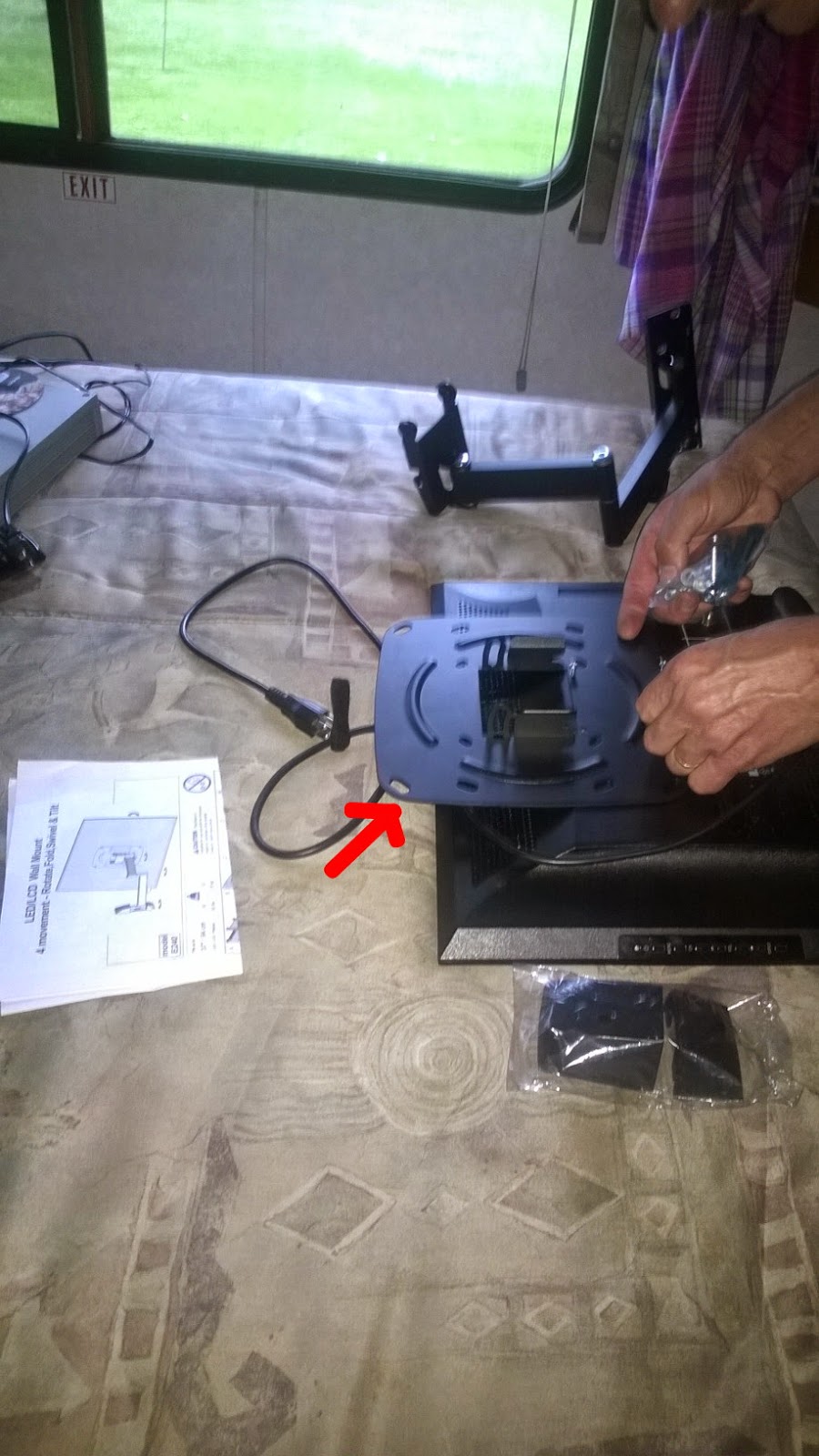 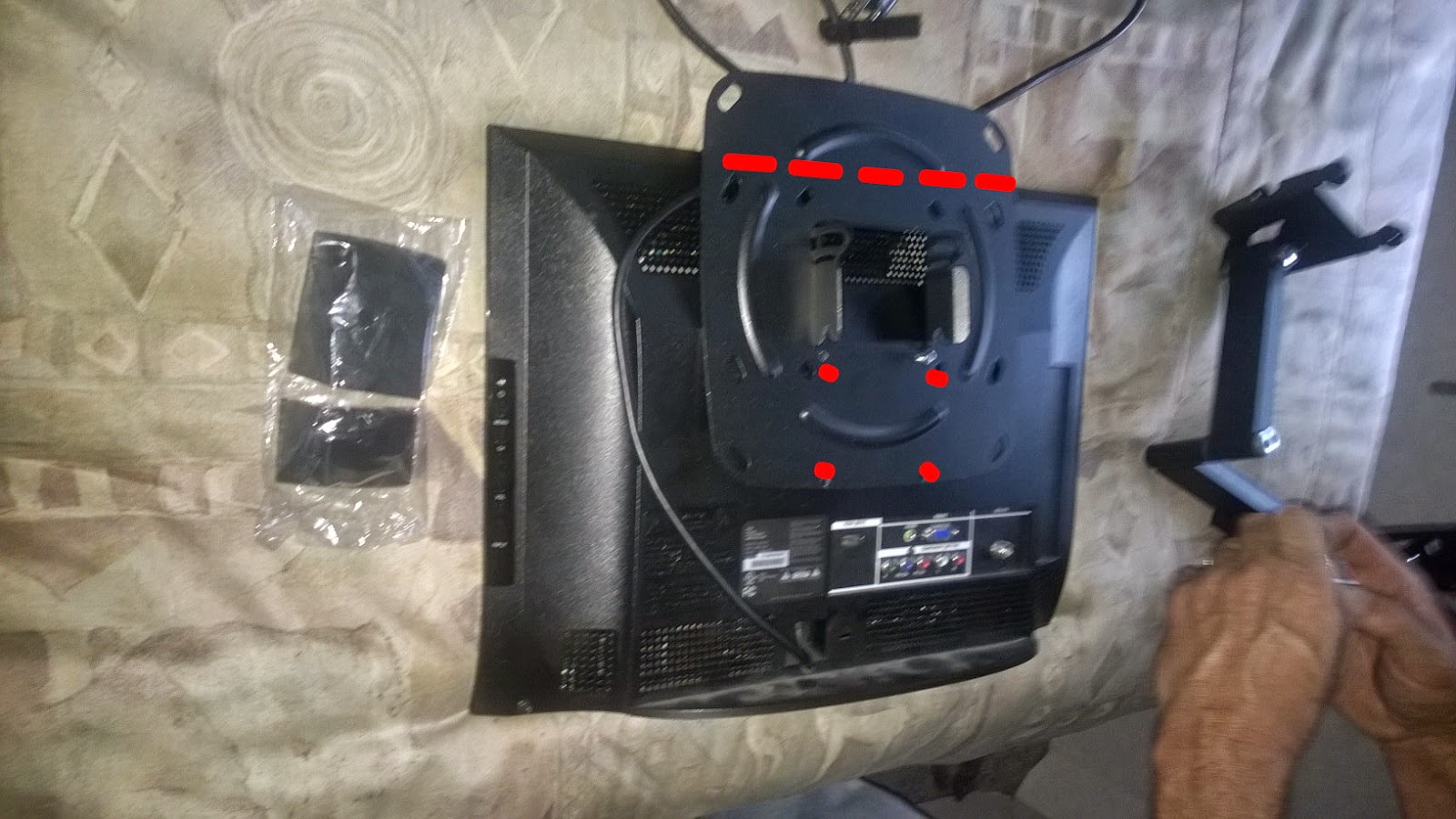 There... that was much better!  He cut it off with his jigsaw blade for metal.  Oh oh... the bolts that came with this kit were also too long!   That was easily solved by Steveio using a special section on his electrical pliers that lets you snip off the threaded ends of bolts without ruining the threads.  What a guy! 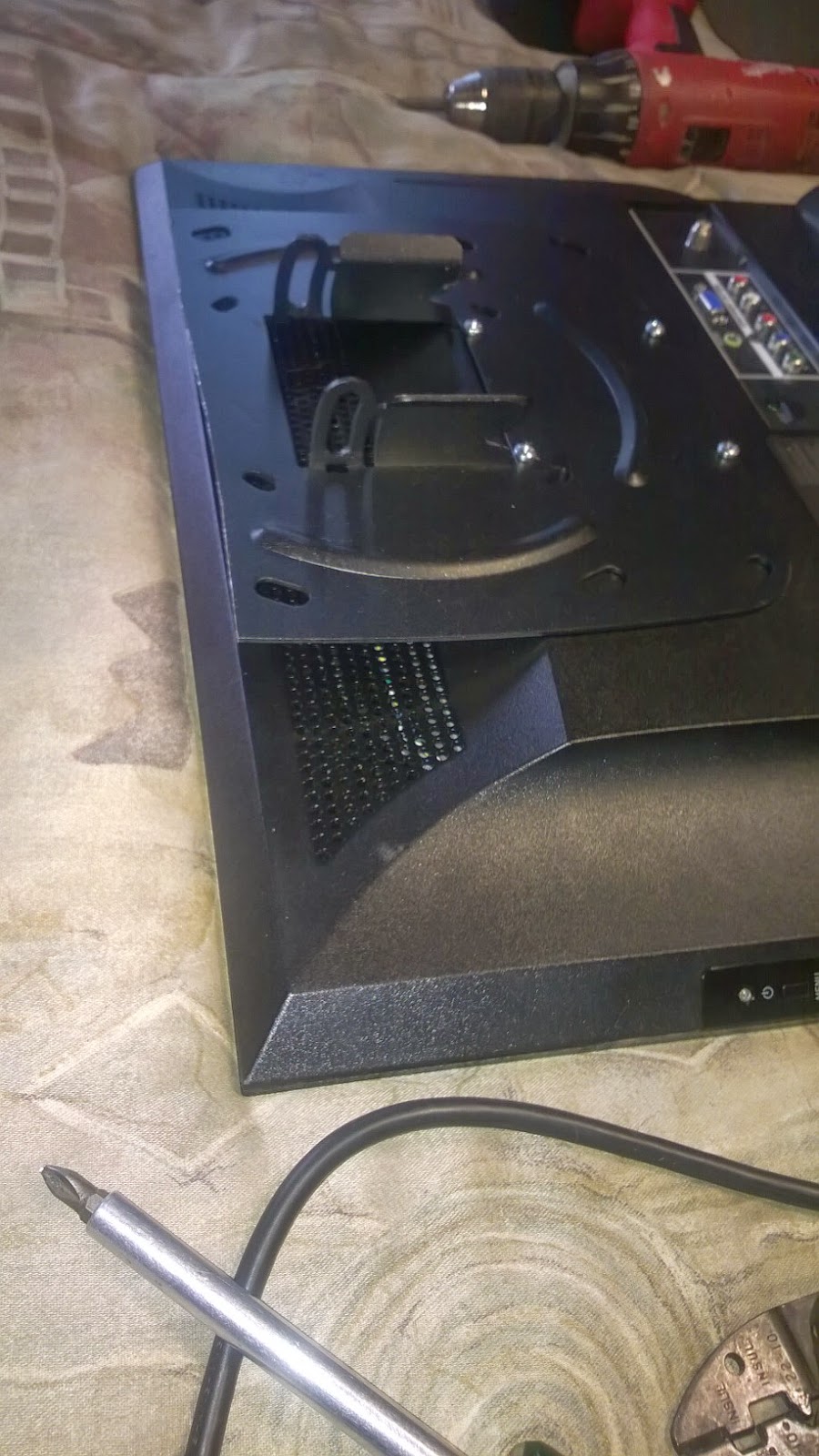 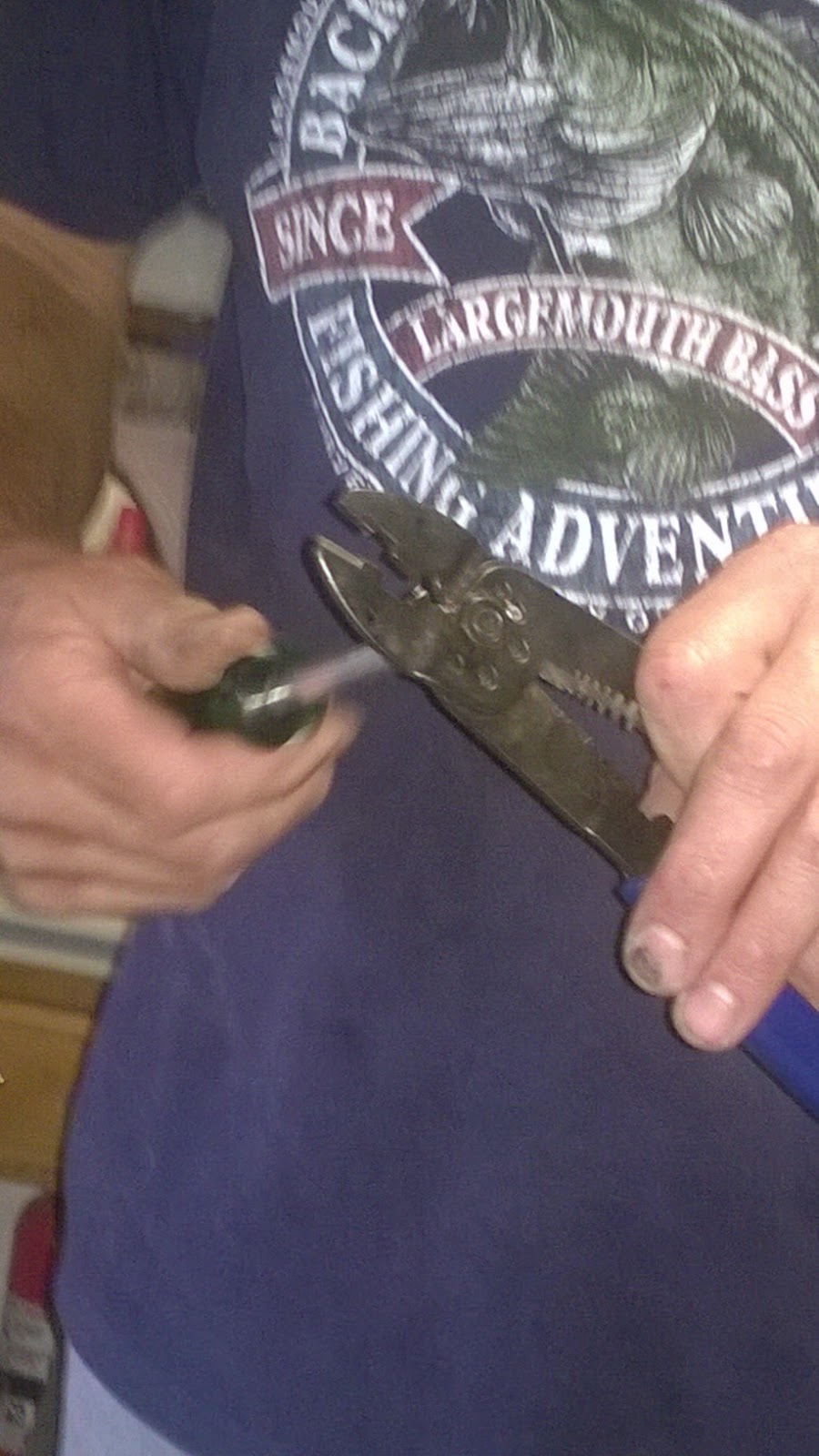 In no time he was screwing the back base plate onto the tv. 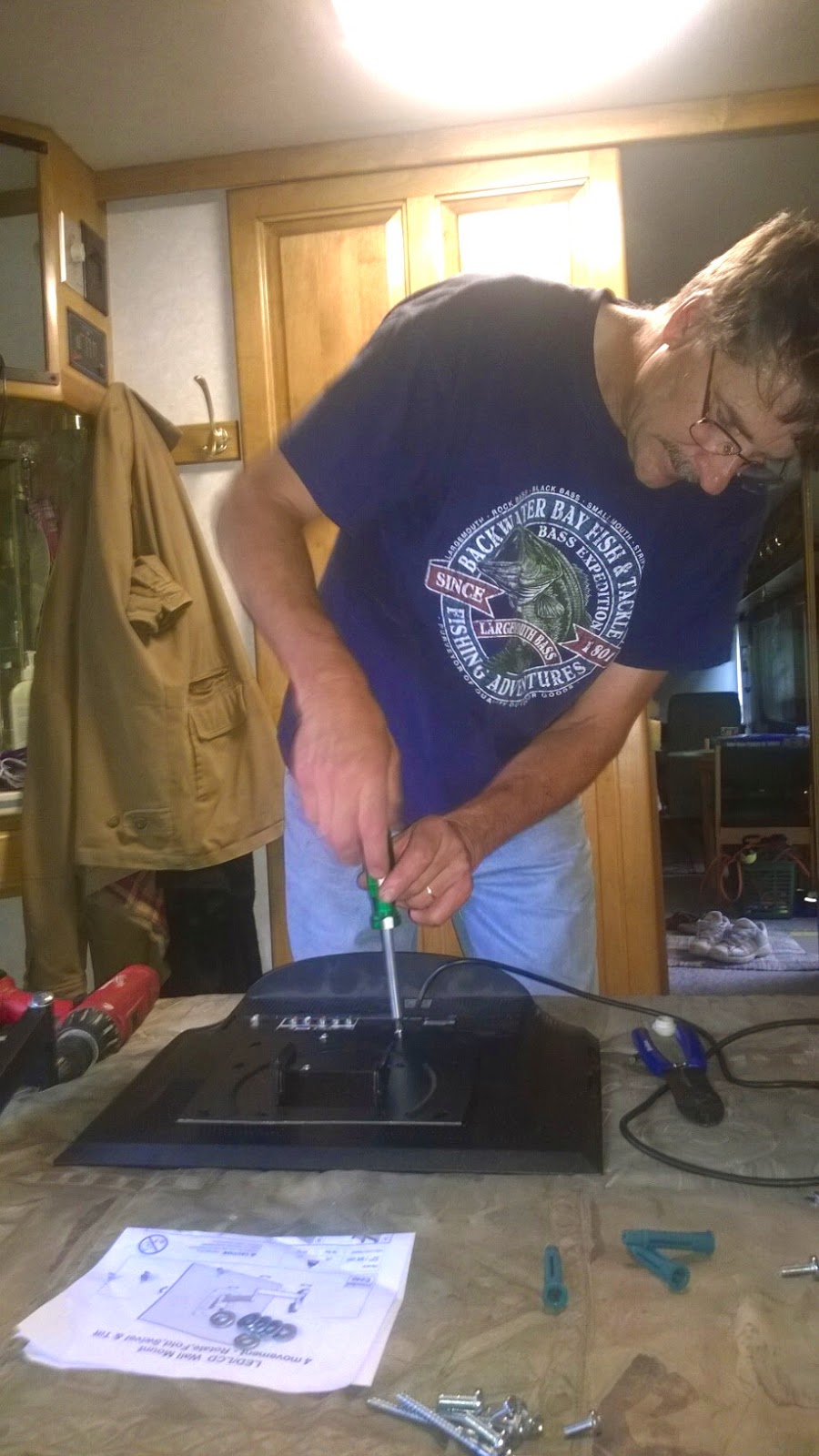 Now we had to mark where the arm needed to be mounted inside of the cabinet for the best position.  I wanted it up as far as it could go along the ceiling, so we could still keep a DVD player in the space below the tv and could use the remote control on it.   It took two of us to hold everything to line up the tv, the bracket, the arm, and mark the spots where to drill inside of the cabinet. 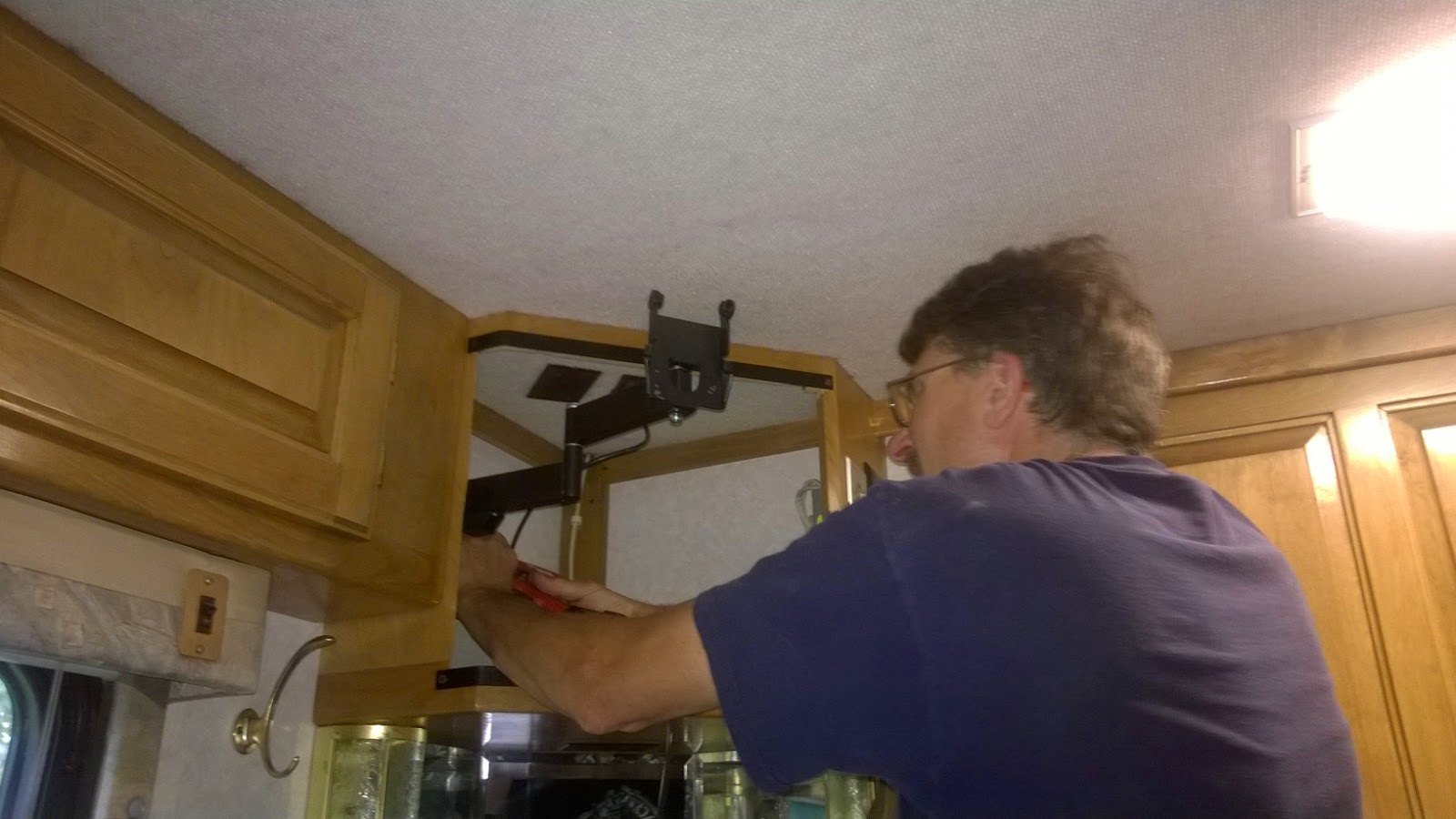 There... all mounted in place!  We ran the 2 inch heavy lag screws into the side wood that goes into the next cabinet. The wood of each cabinet is almost an inch thick, so the screws will hold well in the solid alder wood cabinets in our Safari. I coiled up the cords, coax and DVD connector cables. 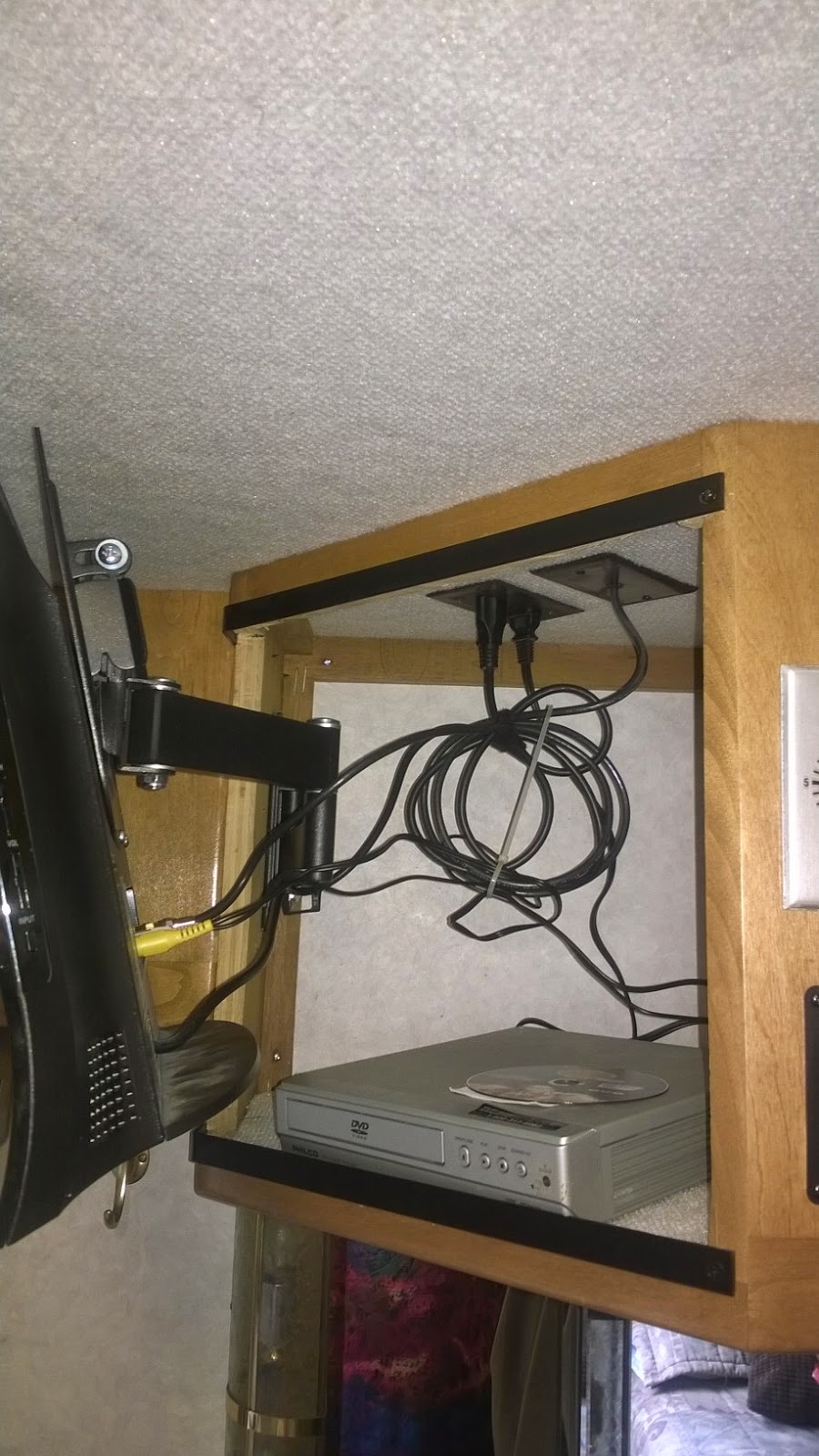 We pushed it back into place and it fit perfectly! 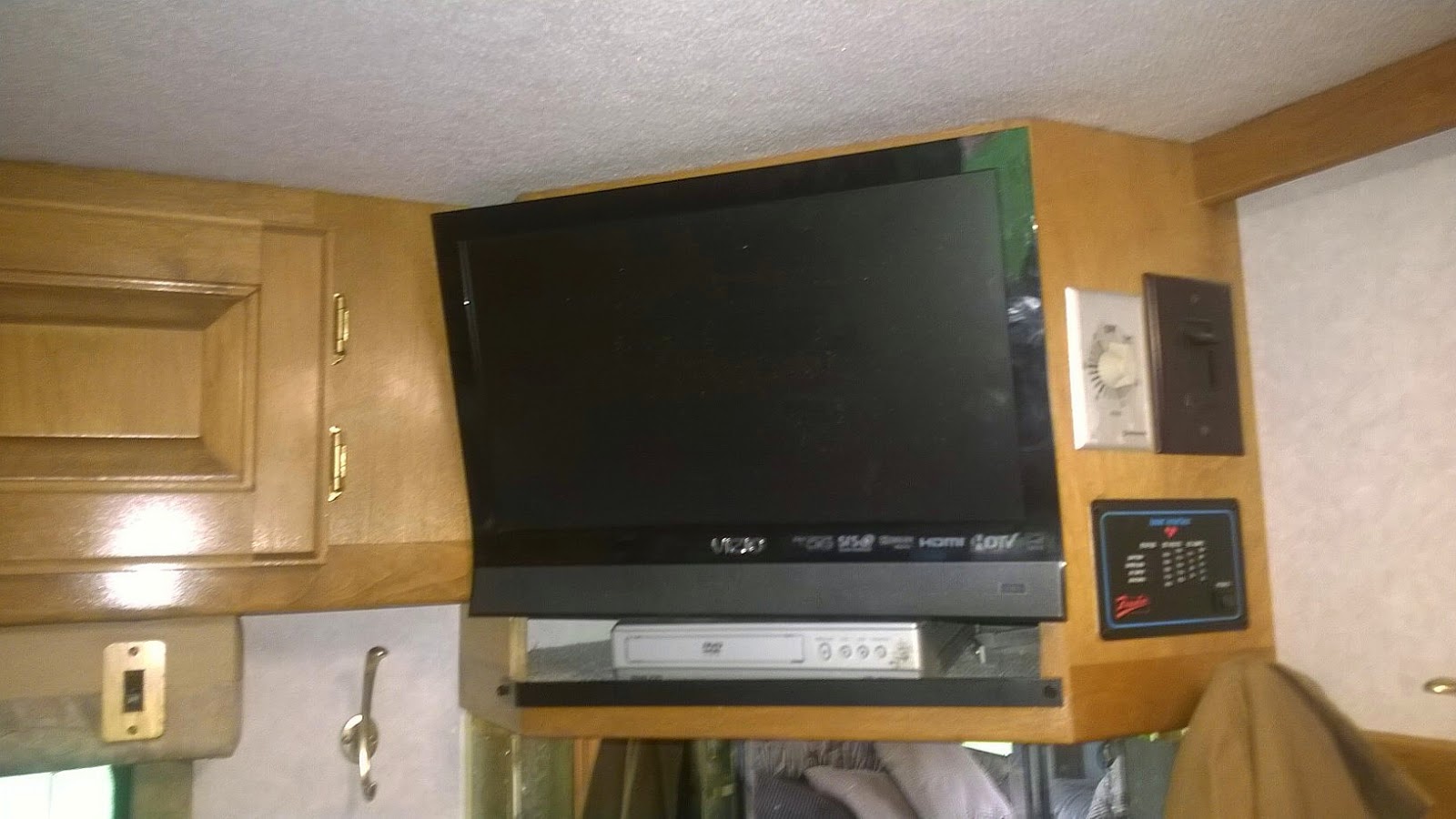 For now, the arm is very stiff and firm, so I don't think we need to use any safety strapping during travel.  We will see.  We can always add a strap later if needed. 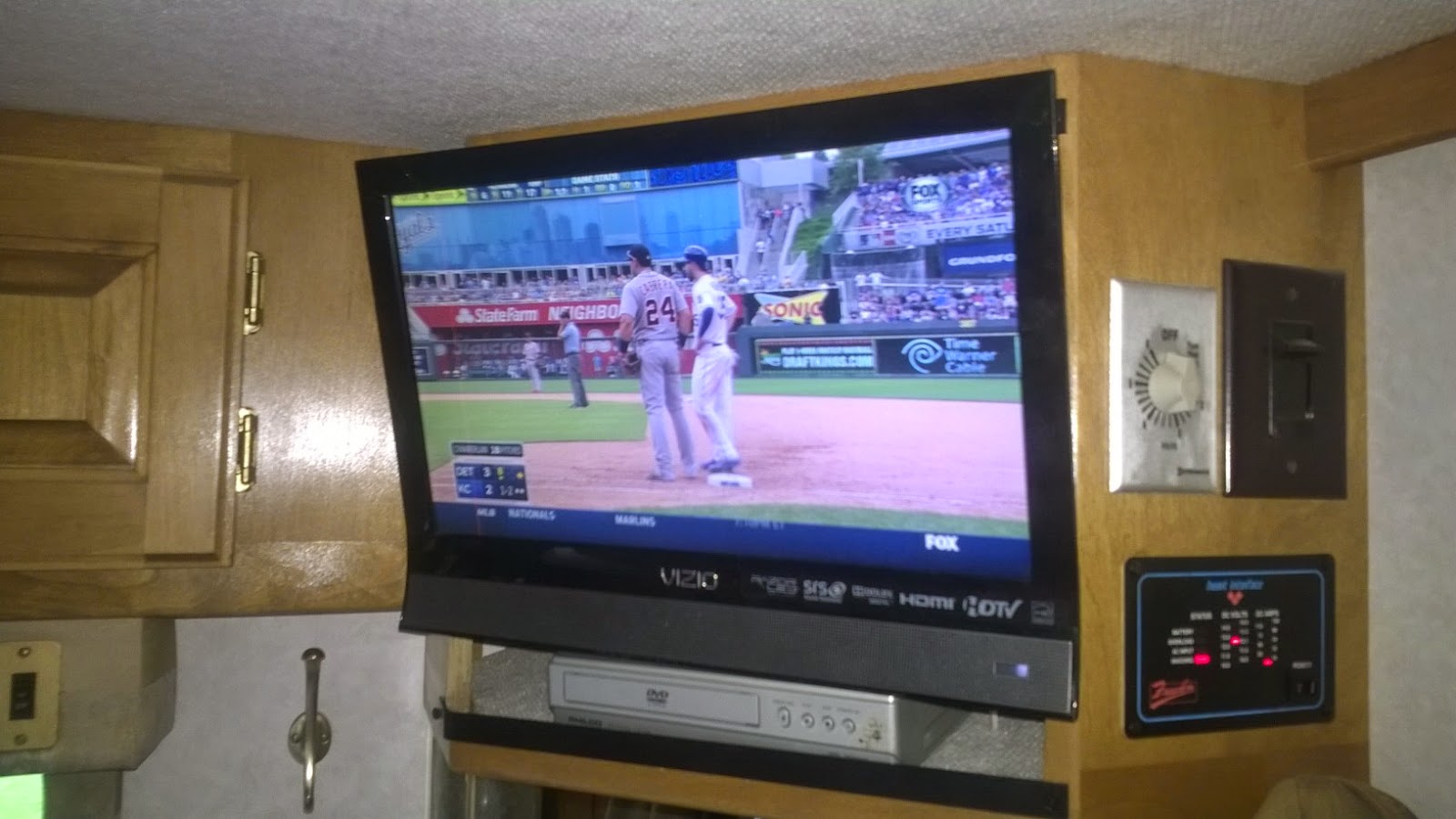 Posted by KarenInTheWoods at 2:39 PM