Now that we are home--- Bathroom Redo

Now that we are back home, I will post the before and after pics of the bathroom remodel we have done since buying the house in January.  We didn't start the bathroom work till June when we had time to work on it (and the funds).  All in due time, bit by bit, now it is done!

The dated and yellowed acoustical ceiling tiles had to go first,
and we wanted to recover the ceiling and upper walls with new drywall. 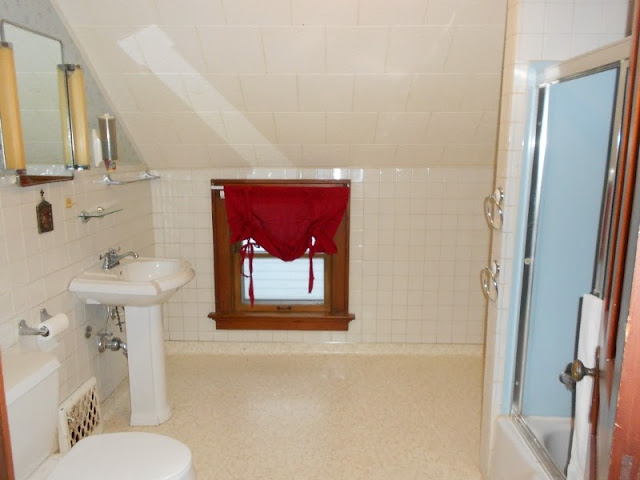 The tub was shallow and surrounded by a turquoise wall kit that had seen it's better days.  The shower doors were good, but we wanted to make some changes, so when we removed them, we gave them away free on Craigslist. 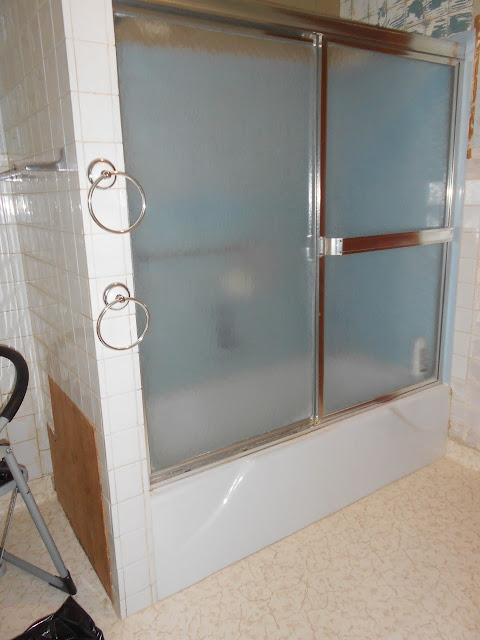 The flooring was dated and we suspected a bad leak around the seal of the toilet.  The sink and toilet were newer and very good quality.  We decided to keep them, but scrapped the old plastic yellowed fluorescent lights on each side of the medicine cabinet (but kept the cabinet)  ....   All of the white tiles stayed on these walls, as I really liked that look.  But the blue printed wallpaper above was peeling and had to "GO".  I removed the iron grate over the heating vent to repaint it later. 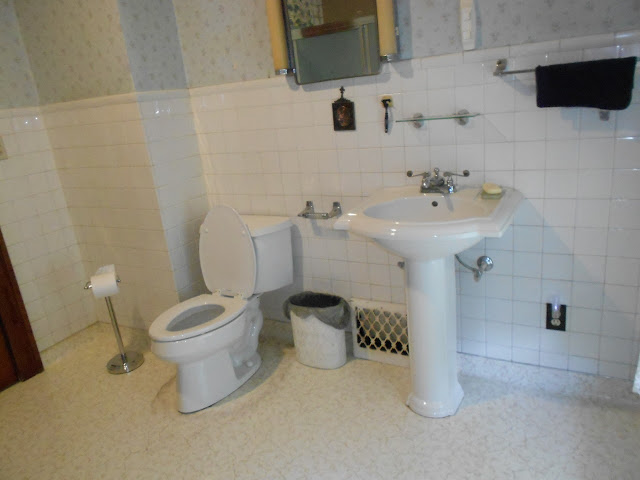 The original awkward layout had a large space leftover on the far side of the tub, but with the sloped ceiling over that area, we could not put a shower stall there.  It was wasted space of about 4x3 that really could be used in a better way. 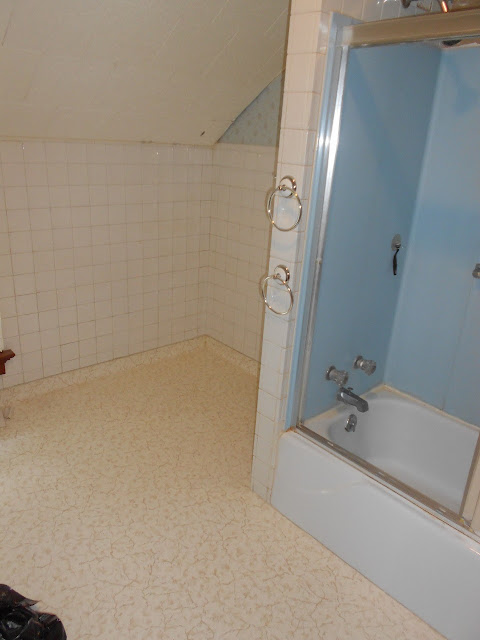 I had originally thought about a cabinet or rack or something there for towels, but we have a HUGE linen closet right across the hallway for that kind of stuff. So we came up with a better idea.....

In planning our new layout, we had to consider the sloping ceiling which takes up the back half of the room.  We also had to consider that while on the second floor, that means the ceilings in the rooms below all were finished.  We could really only use the existing plumbing and drains to a certain extent.   But if we removed the old tub, and put in a new tub, only flipped it the other way into that unused corner, then we could put a separate shower stall in the corner where the tub was originally.  The wall was 9 feet long, so the drain and water feeds were in the middle at 4.5 feet, perfect for a tub facing either way. 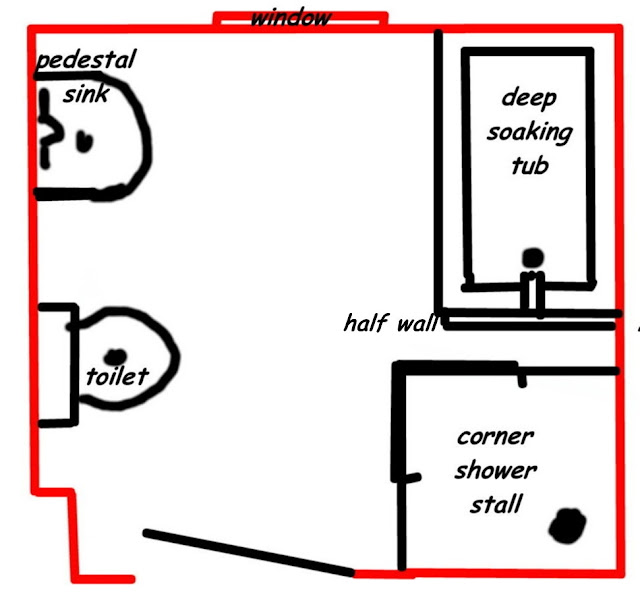 Now it's the DURING PICS

The work started with ripping down the old acoustical ceiling tiles... and putting up new drywall.  Steve made me a T shaped brace to help hold each sheet up high while he screwed in the pieces securely.   We worked on this before we even ripped out the tub, so we could still bathe or shower until the day we planned to remove those.  We just cut off enough of the shower wall to work above it but leave the shower head in place to use it that week.  Looks funny but it worked! 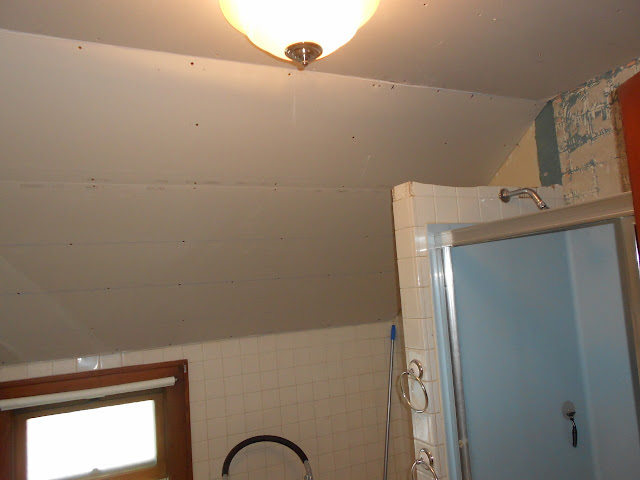 Finally the day came to remove the rest of the stuff and get to work.
Good thing we had a shower out in the motorhome to use while we worked on this.
We sawzall'd down the shower wall and cut out the surround from the tub.
Looking pretty ugly, eh? 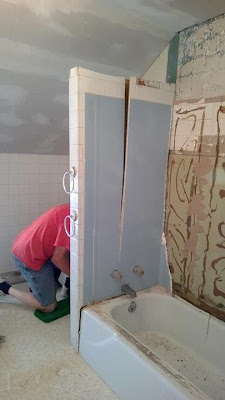 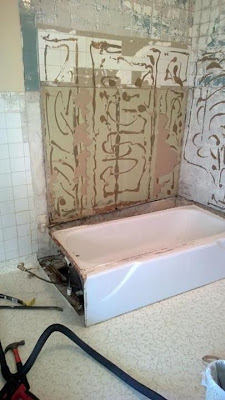 We slid the tub out of the room on those four plastic discs called "Moving Men".  The cast iron tub weighs about 300 pounds as far as Steve can guess. We slid it out and it's still in our carpeted hallway! We have been walking around it. I think this weekend, Steve is going to cover it with a tarp and bust it up with a sledgehammer and take it out one chunk at a time.


Anyhow, back to the bathroom.  He leveled off the flooring after putting in a new drain for the shower and adapted the plumbing a bit to accommodate the reversal of the tub to the corner. 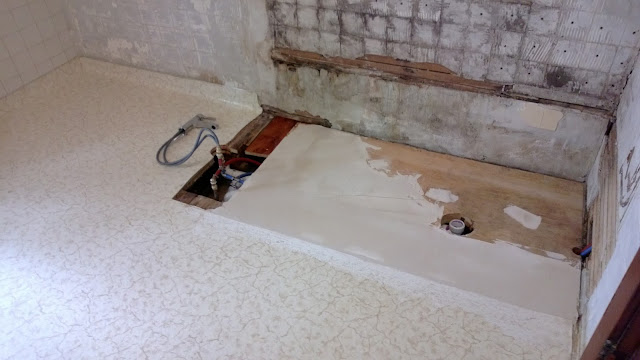 We tore up the flooring,
Yup.. the toilet had leaked over the years....
ewwwwwwwww

But Steve fixed that with new sub floor, and flooring,
and also ran new Pex tubing for the hot and cold lines for the shower stall. 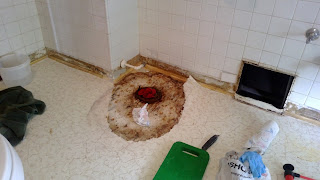 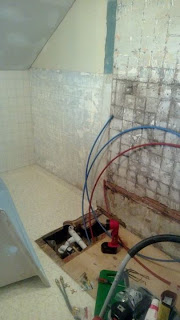 Then it was time to finish the drywall on the walls and do the mudding and sanding. That took a couple days in between each step to dry and do second layers etc.  I couldn't do the sanding with my lungs as they are, so Steveio took over that portion of the job.

We laid the new vinyl flooring ... the color is called White Cement and it is a very soft and spongy type of vinyl flooring.  It's creamy beige and white blotches, and I liked it because it doesn't have any pattern on it.  Then it won't contradict with the squares in the tiled walls.  Because of it's thickness, it hides imperfections and is warm on the feet.  It's the same brand we used in the kitchen that is printed like flagstones.  It lays down nicely and is not adhered so it can breathe and move to the humidity.  The baseboards are later set on top of it loosely but the boards are nailed to the wall, so the flooring can shift if needed. 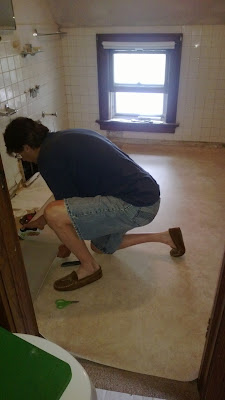 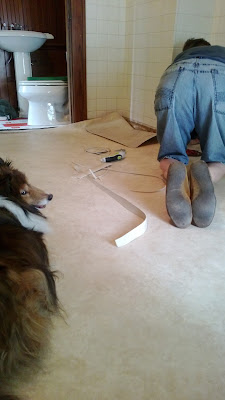 Once the flooring was down, we put the toilet and sink back into place. The wall already had a toilet paper holder, but I prefer reaching for the one on the stand.  So I guess we have His N Hers toilet paper?  LOL We mounted the shower base and then set the tub and hooked up the piping.  At first I thought that I wanted a claw foot tub, but they only go 11-13" deep to the overflow. I wanted one deeper to soak comfortably and found this one that goes up to 21" deep. I kinda like the straight plain lines on this one to look old fashioned. Steve is making a nice back board to hide the plumbing once the trim is all done. 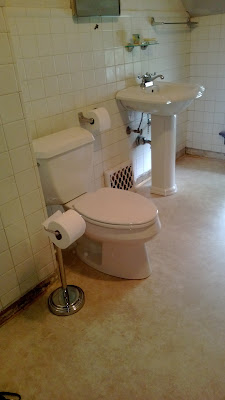 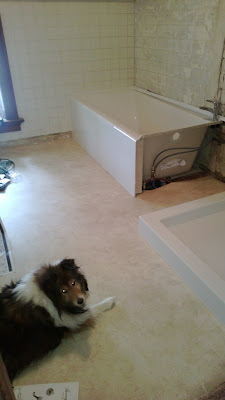 Once the tub and shower base were done, I draped everything in sheets and got the primer rolled on.   When that dried, I put on the first coat of paint.  I chose a soft creamy beige to somewhat match the flooring, while the tub, shower, toilet and sink are all white to match the tiled walls.    I painted a second coat of paint and it was looking better.   By being a neutral tone, now I can change the color of my bathroom any time by changing the rugs, towels and curtain!

We assembled the glass shower stall doors and mounted the walls setup the day before we left for the camphosting position at the campground.  We got to take ONE shower in it before moving to High Cliff for a month! 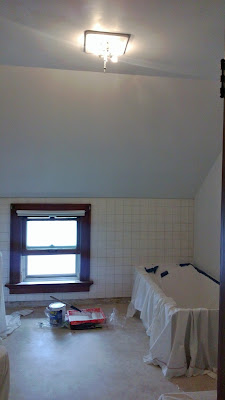 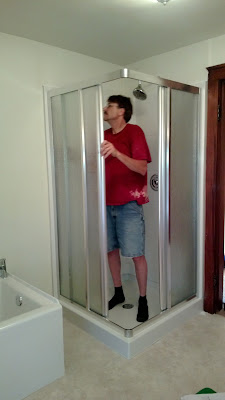 While we were hosting at the park, we took a few evenings off to come back home and finish the trim and baseboards. Steve wired up two new light fixtures on each side of the medicine cabinet. He mounted a new ceiling light fixture that was also a fan. The faucet for the tub is in the corner, and looks like a little pump instead of a normal bath faucet. 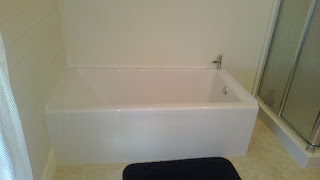 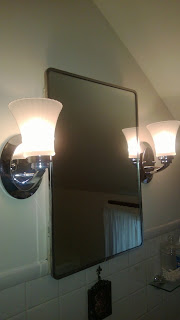 Now for some AFTER PICS

I really like how it all turned out.  I have a few framed prints to hang yet, but I did put back the little floral framed piece under the mirror that was in our bathroom when we bought the house.  I painted the grid on the heat vent, and we sealed around the tub with caulking and trim. But now I look at the walls and can see some overlaps of the paint so I think it needs a third coat to even everything out.  Maybe this weekend? 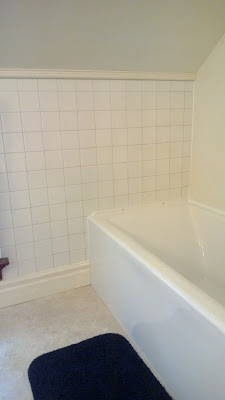 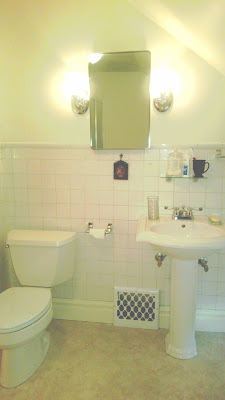 I bought a cute little table this week that I will paint to match
and set between the window and tub.
It will hold my book, mp3 player, and glass of wine as I soak... 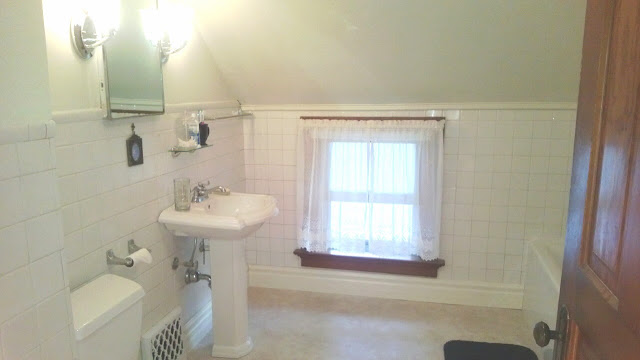 Posted by KarenInTheWoods at 8:21 PM