Ahhhh it finally feels like SPRING is here in Wisconsin!   It started out dark and cloudy with a forecast of possible rain.  But later on in the day we had sunshine and wonderful temps in the 70's on Saturday.  Steve had work to do in Green Bay all morning, so I sorted stuff in my Loom Room and reorganized a few closets.  Things are now *presentable* for an Open House!

After we had a little lunch, we tackled a few more projects around here....  first up was replacing the head on the Jack Antenna system by King Controls.  Easy peasy, 2 pins, 2 little clips and screw on the coax.  Done! 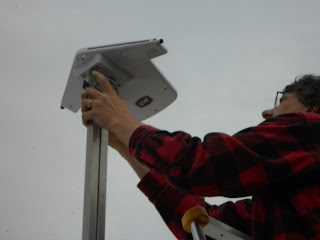 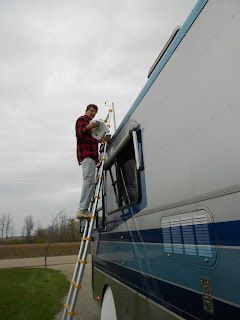 On the other end of the cable down inside of the motorhome roof,
we needed to fix a connector end which wasn't so easy,
but Steve got it done...

The new tailpipe is on the generator now so it's all up to snuff for the season... and we fired it up again to run for a while and noooo big bangs! wheee heeeeeeee

Next up on our list of projects was to finish painting some trim around the house.  I did most of that while Steve was clearing out stuff in the garage and doing a dump haul.    Then we commenced pulling off all four sets of our double patio doors, sanding them down and restaining them and then replacing them again.  That took most of the afternoon----   It was easier to sand them flat out on the deck than getting all that sawdust inside of the house.  We worked on them one at a time, placing a screen door across any open expanse.  The wasps and bees were prevalent, searching for ways into the house or seeking out spots to build new nests.   Bit by bit we did all eight panels and secured them all back into place.

When we were done with that it was time to relax

We fired up the grill and cooked some Klements bratwurst, and some wonderful bi-color sweet corn on the cob!  It was our first corn on the cob since last fall, and we thoroughly enjoyed it!  It was priced fairly at the local Piggly Wiggly store, 6 ears for $1.99      Steve is carefully watching his cholesterol levels, so the bratwurst was a real treat for him! 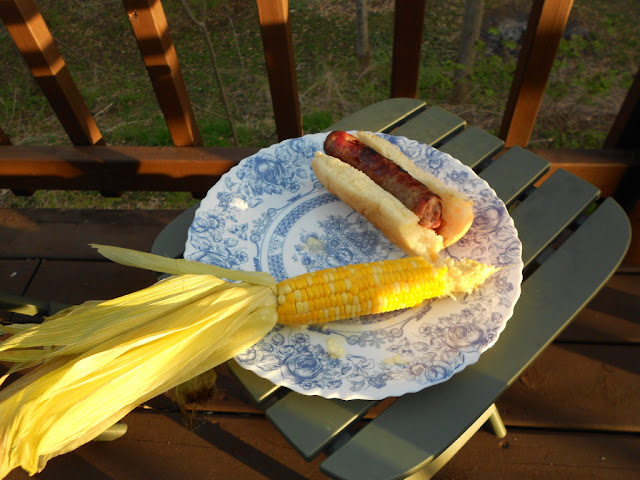 Our woods are slow to green up... just a few buds of leaves opening up on the small shrubs, but the big trees have not leafed out yet at all.  Cooler temps the last few weeks have halted any new leaves appearing. 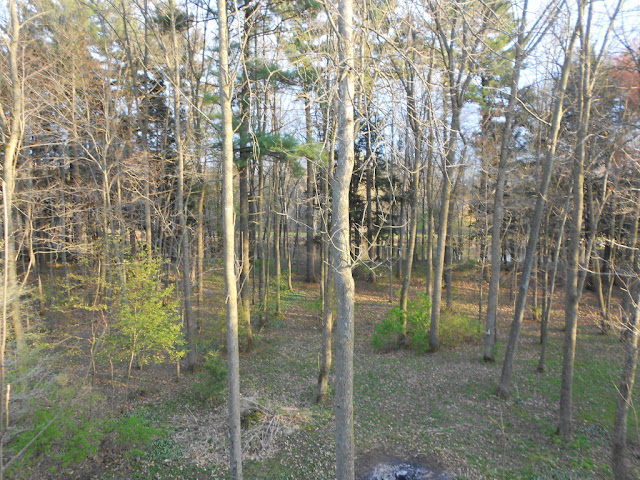 Soon the trilliums and wild roses will burst through, and the ground will be scattered with tiny flowers of johnny jump ups, columbine, arbutus, and buttercups.  After that comes the ferns and sumac.  Up around the house we have some lilacs that are just bursting out their leaves too.

We took a walk with the dogs down along the river.  We used to keep this area mowed along the bank to a lawn level like grass. (It's really weeds--- but short weeds can look like grass, right?)

We used to keep a long right-angled pier reaching into the river where we tied up our canoe and paddle boat.  We have since sold both of those, and the pier too. But keeping the lawn cut down here will look good for showings to prospective buyers.   Steve uses the push mower down here, but one year he tried to run down here with the riding lawnmower!   He got it down there alright and cut the lawn.... but could not get it back UP the bank again!   He tried and tried making a run for it, but each time he would bog out and roll backwards.  I tried to tow him up the hill, and tried using our ATV.  That didn't work so well either, so finally I had to drive our pickup truck down there, winding through the trees carefully until I could turn it around and pull him up with that!    He will never do THAT again, for sure! 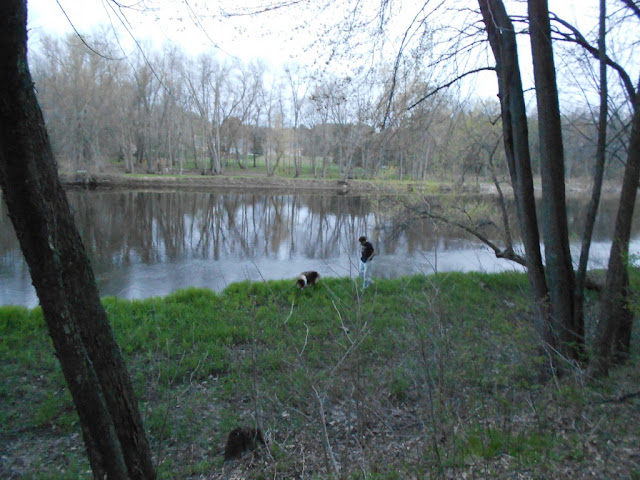 We let the woods and ground covers grow naturally but do make a path down to the river.   Our river is only about waist deep in the middle, slow current, sandy bottom and not too many weeds till late fall.   The kids always waded and swam to cool off on hot sunny days and the dogs sure enjoy it too.

Many years ago, the Oconto River was used for logging.  Along each side of the river was a narrow gauge railroad... we still find the "ore clinkers" here and there sprouting up where the tracks were.  Upriver a ways, the logging companies would block up the river with a dam, and dump the newly cut logs into the water.  They let the logs gather ahead of the dam, let it all loose at once to rush all the logs down the river to the lumber mills in Oconto.  The Frenchmen were best well known for being river "pikers" to ride along on the logs and use pike poles to keep the logs from jamming up.   So the gathering of homes along the south side of the river in Oconto is nicknamed Frenchtown where the logjammers and pikers lived.  On the north side of the river are the huge homes that the Lumber Barons (the mill owners) lived.

To this day there are many old leftover stray logs still in the river along the bottom.  Every year they move downwards a few more feet, submerged in the sand or muck.   A number of years ago, an enterprising fella on the other side of the river was hauling them out at night, under cover, with a big crane.  Kept underwater for 100 years, they were just as good as when they were first cut!   They were pure virgin timber with no knots, clear white pines and red pines....  HUGE logs that brought him BIG BUCKS!   But he didn't have a salvaging license and got in trouble with the Army Corp of Engineers when someone squealed on him.... and he lost that fight in the courts.

Our land along the river has three levels or terraces to it... the first level along the river is the lowest and will flood over in the spring time some years.  Upriver is our little electric company with a dam that controls the water depth, so usually it's fine.  This level you would never build anything on anyhow.   The next level is the woods and the highest up level is where our house is located, beyond the flood plain.

These wooden steps are 15 years old now.  They had originally been in the house as temporary steps up to the loft when we were building the house.  We later replaced the temporary house steps with custom made log steps from Steve's brother, Mark, who also builds log homes.   So we took these temporary steps and painted them and put them down by the river. A good use for getting down to the last terraced level of our land to the river. 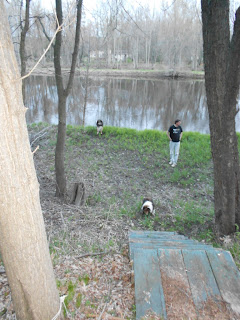 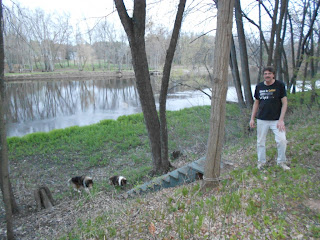 The woodticks are out in full force, but the doggers are all set using Frontline.  Steve and I checked for ticks when we were done with our walk, fortunately, none on either of us!  Just like Florida folks deal with gators and fire ants, or desert people deal with scorpions and rattlers... we deal with woodticks! 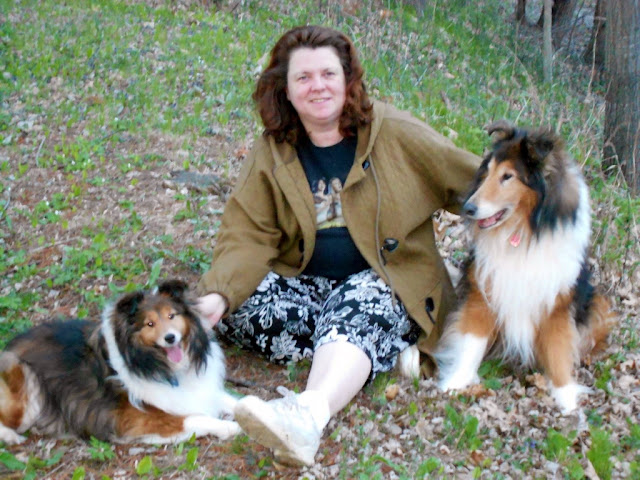 Our doggers are getting old now... see all the white on Ducky's face? (the collie)   She will be 12 in a couple months.  She is now on glucosomine for joint aches and stiffness.  Duke (the sheltie) is also showing his years, and will be 8 in October.  He is having some issues with his thyroid and also has a big tumor (hopefully just a fatty one) on his chest.  We know our fur kids won't last forever, but sure hope they make it for a few more years when we go fulltiming.  They both the love the motorhome so much, and even beg to come out in the rig if we are only working on things.  To go for a test drive without them in the rig makes them CRAZY!  They chew us out when we get home--- angry barks, whines and twirls in circles to make us understand that THEY BELONG IN THE RIG IF IT MOVES!    heh heh


As the sun was going down, I snapped a shot back up through the woods to the house.  Normally this is all covered in lush green groundcover, shrubbery and woods in the summer and you can barely see the house from here.  But at least, it IS springtime in Wisconsin!  All is calm now, but Sunday we are due for some severe storms and winds and awful weather.  Glad we got a lot done on Saturday. 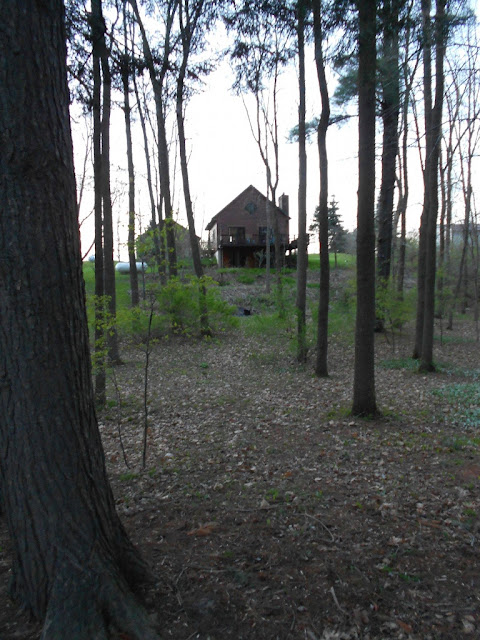 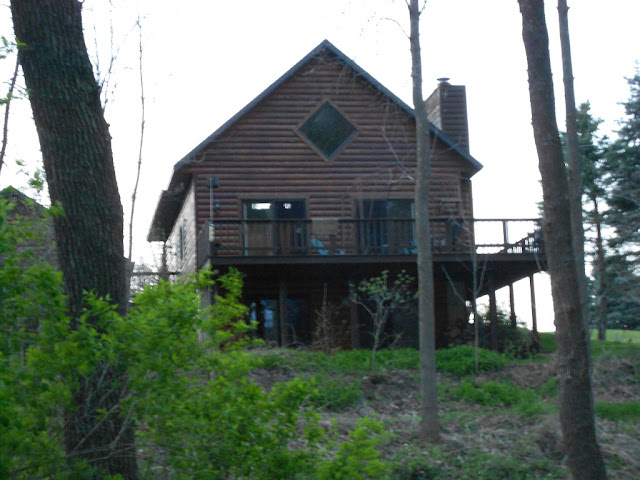 Sunday morning as I write this, we woke up to rain and clouds.  Supposed to get high winds later on, and thunderstorms by evening.  I guess it's a good time to get more inside projects done.

I think we are about ready to do an Open House next weekend.  We have the signs, the Offer to Purchase forms,  and I am just finishing up the flyers to put in the tube on top of the sign.  Who knows, by next week I might be blogging about a sale?????

Posted by KarenInTheWoods at 10:05 AM