I said in my last blog that I would post about Steveio and his love affair with grills.....(not GIRLS... GRILLS!)

When I first met him, he said he did a lot of cooking over a grill.. even pizzas!   And because he was remodeling the house he was living in, he didn't even have a stove yet till the cabinets were in.  So ALL his cooking was over the grill out in the back yard.   What a guy, eh?   Little did I know where this love affair with grills would lead.......

When we got married, I already owned a huge Webber kettle charcoal grill, it was larger than the regular Weber and it was great for large gatherings.    We always had to wait for the coals to be ready, but he liked cooking over it and did a lot of family parties and big meals over that grill.  Four hungry teens and their friends would be about the right size family for a grill like that.   He has now brought it to work and they have company cookouts using that grill.

Once we built the house up in Oconto, I got him a regular propane grill like everyone else has on their decks. You think that would have kept him happy?  One grill, easy start, quick, and he could cook on it.   Fine? 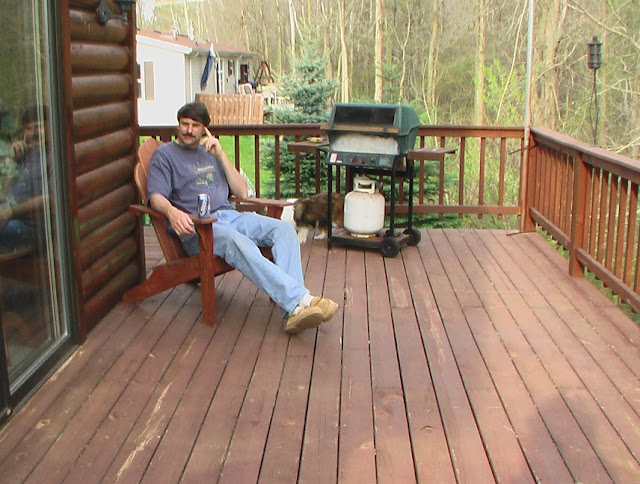 He cooked and cooked on that grill,  and I think he had to replace the innards 2 or 3 times over the years.  But he said he was thinking of getting a tabletop grill that we could take camping too.   I had no idea what kind of Monster I was creating.  I said I thought that was a good idea and we could look at new portable propane grills....

So when Heather got her first apartment, he gave this regular normal deck one to her to cook on.

And after looking around, for his birthday I bought him this:

A Coleman Roadtrip grill--   I bought the extra griddle piece and the extra grid to make one side a burner.  And it's blue so it matches our motorhome .. heh heh   The X legs collapse down so he can just slide it right in a basement compartment.    So I thought I did the best thing, by getting him a grill that can be out on our deck or take along in the motorhome.   It cooks wonderfully, but  the enamel coated cooking grids are kinda strange and very hard to clean.  They are not wire racks like most grills.   We have to clean this grill right away each time or things bake on and it's really really grodey, and takes a lot more elbow grease to clean it than just leaving it sit there all icky. 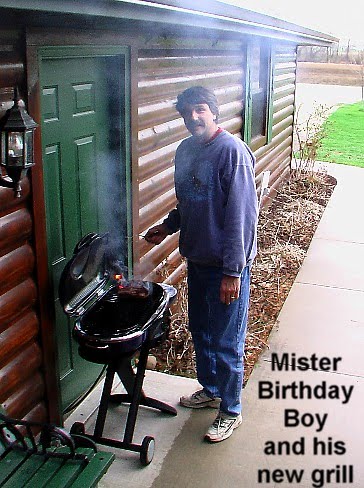 Then one day he saw THIS on a special sale from the website RV Toy Outlet.. 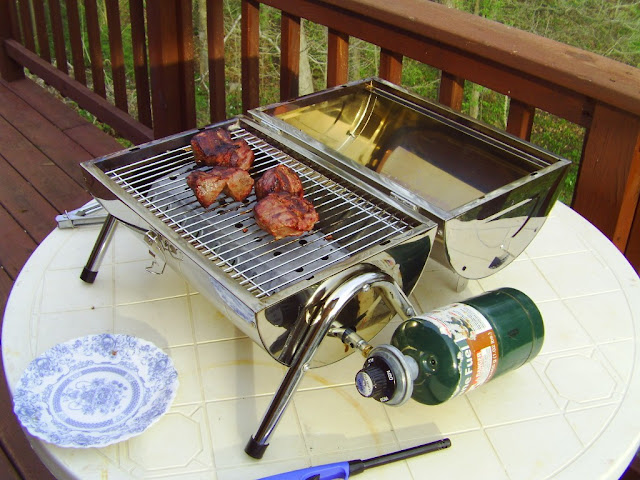 That was about three years ago.. and now it's all worn out and won't work anymore.  The innards aren't even replaceable, so now it was time for shopping for another grill!


He saw this Party Grill from Coleman and wanted it.   He said it would be great in the motorhome too.  It works great and is perfect for 2 people ....  here he has it loaded up with ribs for 6!   But it's still kinda small, and he said the one drawback is that there is no lid, to help cook foods on the grill, ya gotta be able to cover the food sometimes to get better heat and through and through cooking on some meats. 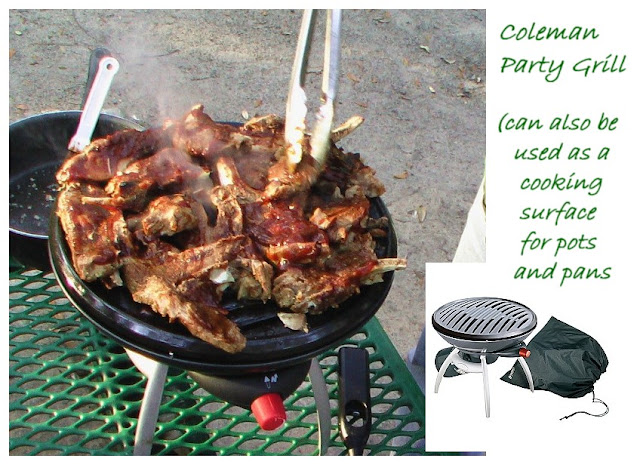 So the hunt was on again for another grill besides the three he already owns....  oh geesh.

He saw a nice cheap Charbroil at Fleet Farm and hinted it would be good for his birthday.  $20.    Soooo I went in April and bought it, just a nice table top grill with a lid that ran off propane.   Okay...  hidden away till his birthday, I am thinking all is good.   But 2 days before his birthday, WHAT does he come home with???   The very same Charbroil grill!!!   He said he knew they were on sale and he had a co-worker pick it up on a tool run from work!  ARGGGHHHHH   WHY does he go and buy things for himself right before his birthday, Father's Day, Xmas etc. ?  He does that very often. 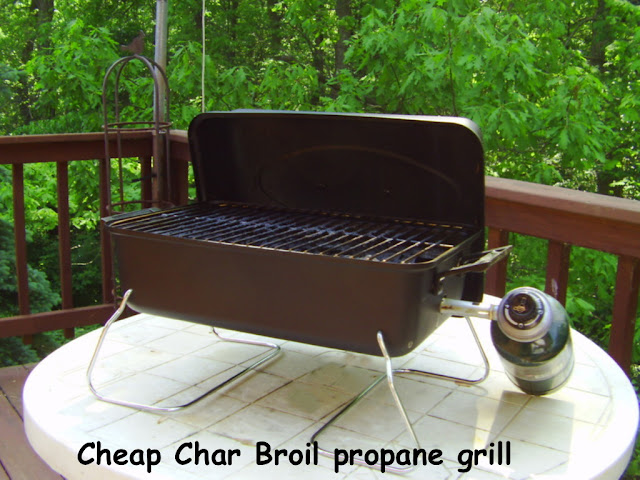 So he opened one of the grills up and used it.... works great!   And the other one we kept new in the box and donated it to my brotherinlaw's cancer benefit to be raffled off.

So now he has the Charbroil for at home on the deck, the bigger Coleman Roadtrip if we have company, and huge Weber for at work, and the small Coleman Party grill in the motorhome.....
Then two weeks ago..... he was thinking out loud:
"HEY.. WILL IT MAKE SENSE TO HAVE **TWO** OF THOSE CHARBROIL GRILLS?  KEEP ONE IN THE MOTORHOME AND ONE AT THE HOUSE!   THEN I DON'T HAVE TO LOAD OR UNLOAD THE CHAR-BROIL!!!! "

So now he wants ANOTHER grill???

We said we would pick one up next time it went on sale, but then we were shopping in Aldi's grocery store, and he saw THIS one!   No name brand, but larger than the Charbroil, but smaller than the Roadtrip..... 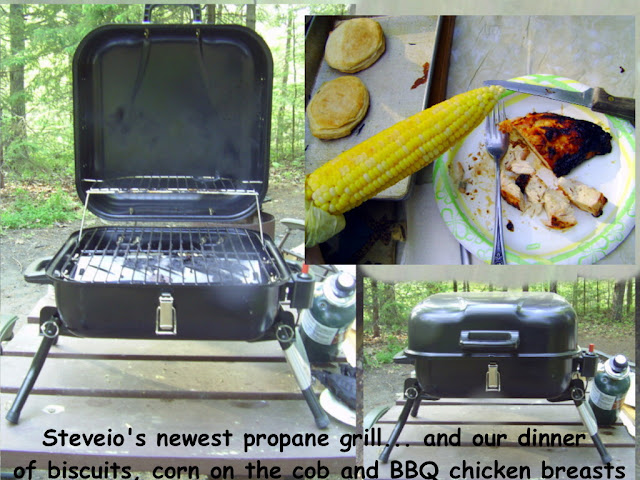 He said this one is a winner... and he should buy a couple new in boxes  to store away when this one burns through or wears out.   Oh really???


But please keep in mind that he also likes cooking over a campfire!   Sometimes he cooks over the grids that are in place in the national forest camgrounds we often go to..... 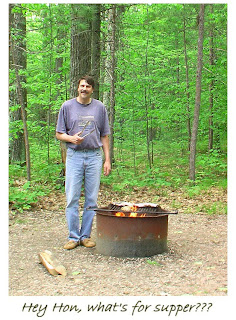 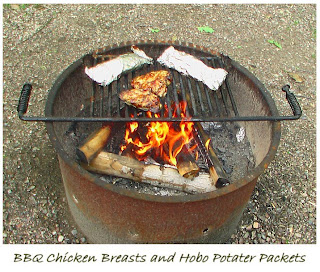 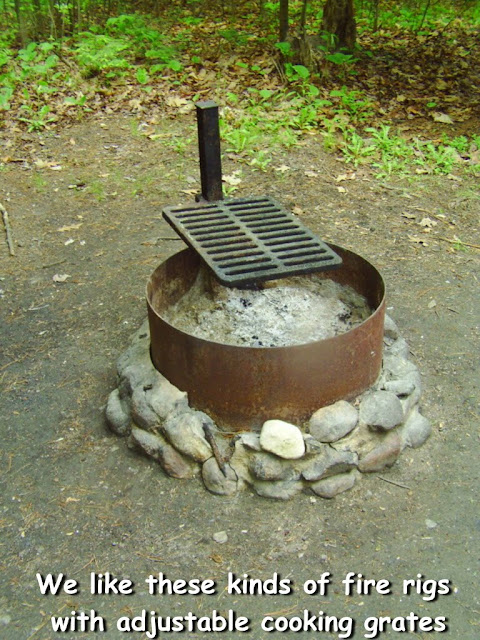 Then of course if there is no grid over the fire, he needs to cook over a tripod too..... 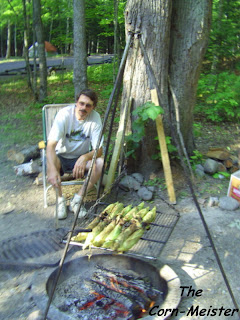 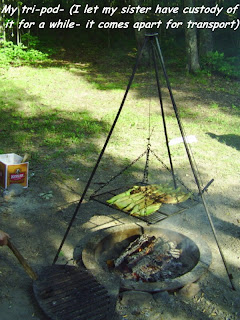 Not only cooking meats or corn right on the grid, he also does big pot meals too...... 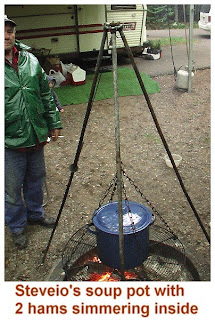 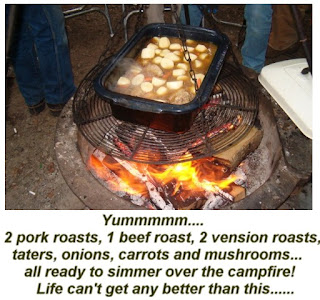 Now, my sister is the one who carries my tripod all over for camping, even through it collapses, it's grubby and sooty and would make a mess in our carpeted motorhome compartments.  So they carry it around in the back of their pickup truck, and bring it to wherever we go camping together.
So what if Steveio wants to cook over the fire when it's just the two of US camping???   My crafty creative guy Steveio made this cooking grid and metal stake.  Yup, he designed it, welded it up and it is comprised of the one stake and the one flat grid/handle piece.  The weight of the handle keeps the grid at various heights by just sliding it up and down on the slanted stake, and it stays put whatever height you set it at.   It stores flat in a heavy duty plastic bag in a basement compartment of the motorhome. 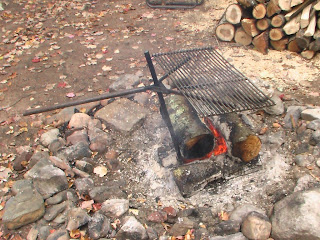 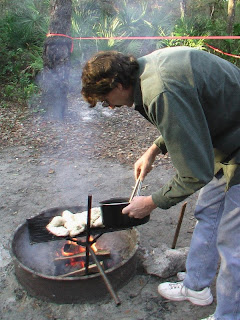 Then sometimes when we are with the whole family, my brothers bring along THE QUAD POD!!!    This is a tripod made out of a swing set, with a cable, pulley and a boat winch to raise or lower the grill, and has accessories like a big flat griddle for 16 pancakes, or a big cast iron dutch oven.  This is for SERIOUS cooking outdoors!   It can come apart into pieces and be hauled from place to place. 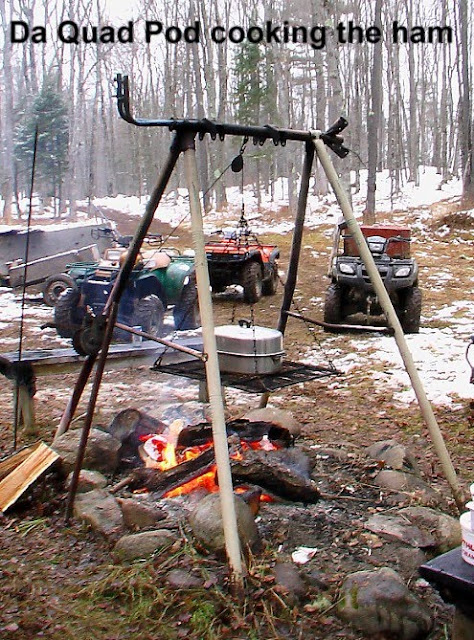 Sometimes we also cook over the fire with pudgy pie irons, not quite a grill, but still cooking over a fire, right?   We have a collection of I think 4 or 5 right now, and whenever I see them at rummage sales, I snap them up!~   The newer aluminum ones are not as good as the old cast iron ones, take my word for it. 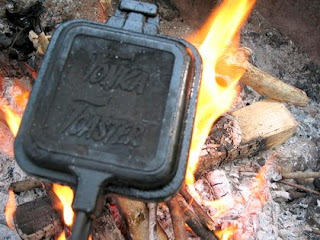 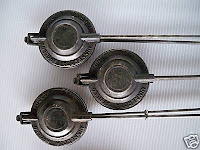 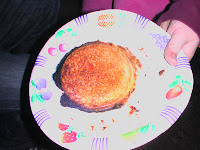 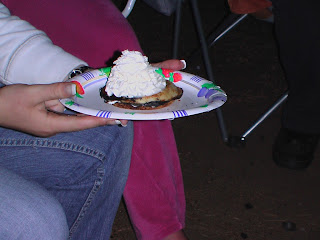 And last, but not least, is the Redneck part of Steveio who always wants to cook a turkey, by deep-frying it!

So I bought him a turkey deep-fryer one year.   Honestly, I use the burner and stand more for canning pickles or tomatoes or dyeing wool out of doors, but we do a bird every now and then too. 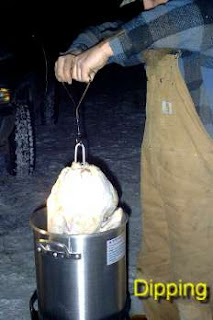 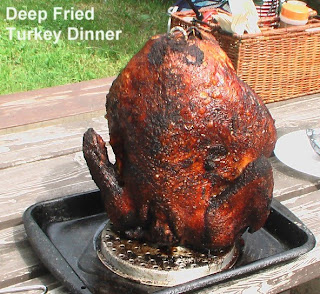 He has also used the deep-fryer (with salt water in it)  to steam up Alaskan Snow Crabs legs for my birthday! 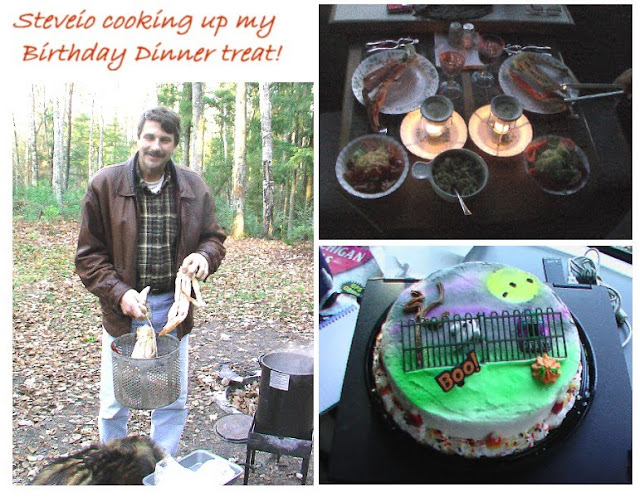 Now, as I write this and look back over it...
I realize that **I** am the one who keeps buying him
all of these grilling toys!!
GASP!  I am an *ENABLER* to his addiction!!!!
See why I said he has a love affair with grills????
Better than with WOMEN!  LOL LOL

Posted by KarenInTheWoods at 11:09 AM