Up On A Roof or Down In The Basement

Steve was Up On A Roof (I hear James Taylor singing in my head). He went up to do some tuck pointing around a few bricks, and fill in a gap where one was missing.  Since we had the chimney height reduced last year,  he has been wanting to get up there and fix that last gap.  The chimney is blocked off and not used for anything, so it's just basically for decoration. Someday, if we ever were to redo the roof with metal,  we would probably take it down completely.

The chimney is pretty ugly. Originally, I had been thinking that since the bricks don't match in color, it would be nice to just paint over each brick surface with my red paint on a roller and make everything match. But once he got up there he said the lower darker red bricks are much rougher and will be harder to paint, compared to the lighter bricks above.

So instead, he is going to parge over the entire surface with masonry cement and paint the whole chimney solid red. It's going to warm up later this afternoon so he will work on it then. For now, he took care of wire brushing down any loose spots and dirt. He gave it a light scrubbing with a degreaser and he will let that dry.
While he was up on a roof, I was down in the basement. Well, almost. I gave a fresh coat of paint to the bulkhead doors that lead to the basement in the newer half of the house. They had gotten slobbered up when Steve was painting some of the white trim and siding up above, especially the soffits--- he got some drips that landed down on the bulkhead. So it needed a new fresh coat of my red paint anyhow.

I never wanted the bulkhead in the first place.
That's the whole reason why I got the bedroom window!
See, we made a deal. Last year Steve wanted to rip down the regular shed type entrance to the basement that had an upright door and a roof, etc  I thought it was fine the way it was. 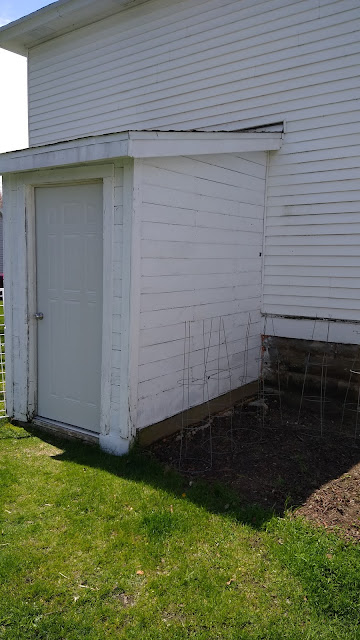 Here is the blog post about that process:  and-walls-came-tumbling-down   I didn't like the idea of the bulkhead cuz you have to lean over, open up the slanted doors and walk down into it like going into a bomb shelter! LOL. So if he wanted to put on these bulkhead doors, the deal was then the space left over on the wall I could have the big window in the bedroom. So he got what he wanted and I got what I wanted --- and it's finally done!
Well, almost.
This morning, right before we were making breakfast together, he took out his ladder and the two red shutters that I had already painted for the bedroom window.

While I was watching him, I was standing on the patio looking at the surface and texture of the new siding we had put up. This isn't plain old vinyl siding. It's called LP Smart Siding and it has a beautiful texture embossed into the wood strips. It's put on a strip at a time just like regular old wood siding but it lasts a lot longer. I like it so much better than vinyl siding. I like looking at the natural texture of it where it looks like it could be real wood.

Anyhow, back to Steve.
Zip Zip Zip in no time flat he had both of the shutters mounted on each side of the bedroom window.

Now we just need one more set for the bathroom window. They will be 74 inches tall and not as common as the shorter ones. I have been watching the ReStore shutter bin for a number of months, and haven't seen any that tall.
Here is the East side and back yard that we did this year. New siding, new windows all around and the screen door, along with the patio stones and rain chain. We fixed and painted the foundation surface too. The bulkhead doors are the same color as the shutters and picnic table, just the angle and light make them appear brighter.

We didn't find any shutters on our last stop at the ReStore in Marinette. But he is going to Green Bay today with the neighbor to do some other shopping. He will stop and look at the ReStore in Green Bay. But if they don't have them he might just bite the bullet and pick up a full price set at Home Depot! Can you imagine that? Paying full price? At the ReStore we usually find them for $5 each. At Home Depot it'll cost about $60 or $70!

Okay, back down into the basement for me. I had a few more bunches of my coleus that I had dug up in the yard and some that I had rooting in glass jars in the window in the kitchen. Time to get them planted for the winters retreat in the safety of the basement. I keep enough plants growing all winter in the south-facing windows. In the Spring, when the danger of frost has passed, I am able to transplant them outside again

This year, Steve made it easier for me to water the flowers in the basement. I used to have to carry buckets of water down from the kitchen each and every week, all winter long. Hauling buckets of water from the kitchen, through the She Shed, through the side door, outside through the snow, then lean over and lift up and go down through his dang bulkhead doors, down the steps and into the basement. Now, it's so much easier because he added a laundry sink to the basement. Not only is it good for watering my plants, but it's right there for washing out paint brushes and roller pans and even to bathe the dog.

I have some painting of the trim to do to finish out the inside of the bedroom window. Also the big wide old original mop boards can be put back into place.  We are recreating the top crown and egg and dart trim for the top of the new window, as well as the top of the new closet trim.  Then it will match the other window and both doorways.

So that's it for our home improvements today. Like I said, Steve is off to Green Bay with the neighbor for a couple hours. I will finish up this blog and get my own stuff done.  I might get in a couple hours of quilting or weaving.

This evening we're babysitting three of the grandkids so I have a list made up of fun stuff to do after we pick them up from school.

Posted by KarenInTheWoods at 12:18 PM