Now that Steve and I are just about done with all of our summer long projects: putting in the windows & siding in the kitchen nook area, then the big bedroom window & siding on the east wall.... we were sitting back and relaxing----

Relaxing??? You have to be kidding!

We were having a discussion. We were asking each other what would be our own next priorities for what projects we wanted to do. This is to get ideas for inside projects to work on this winter. It is good to set goals.

One of the items that bothers Steve has always been how someone adapted this double wide doorway down into a single door. It is located between the living room and the guest bedroom. Perhaps long ago it had been a parlor?  We are sure the two French doors are long gone and were never relocated in the house.

I suppose they adapted this to be more private for an additional bedroom. It seemed they did it as best they could, and made it look okay. But it has always bothered Steve.

Being that the doorway is only 5 feet wide, most new French doors would not accommodate this opening.

Steve is such a good lookout shopper on Facebook Marketplace, he has been watching for just the right doors. The only problem is that the opening is also very tall, 90 inches high. Most doors are only 79 or 80 inches tall. But he figured that if he found just the right doors in the right width, we could add a transom on top and do some decorative glass work or something to fill in the space.

Last night, he finally found the right doors.... at the right price!!!

They're actually new doors that still have the plastic on them. But they had been temporarily mounted into place.  We have no idea why somebody never took the plastic off. She said in her ad there are some scratches that need refinishing. 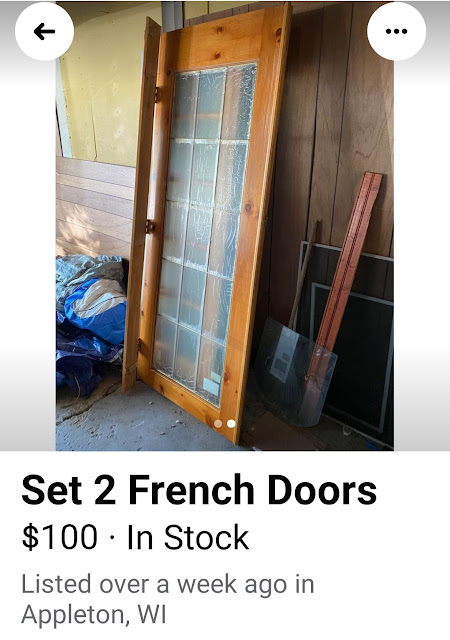 If you look close in this picture of the glass, it has thin brass caming between the panes. It should look really interesting.... and old-fashioned.  That's our goal.

We will paint the wood portion to match the rest of the trim in the house. That will be my part of the project. Sanding down the flat wooden areas and giving them a few new coats of our matching trim paint will bring them around to our liking.

It will be Steve's project to figure out how to remove the old doorway and somehow hopefully the floor underneath will be in good shape. We can maybe work a little magic with some spot sanding and polyurethane like we did over in the kitchen by the half bathroom door.

Now it came time for my priority wish idea of an inside project. I had come up with this idea last year, and kind of put it on the back burner for a while. I knew the supplies that I would want to buy to create it, I just haven't gotten around to buying them yet, or justify the cost to the budget. Because it was just a decorative item, and not a structural or necessary thing. Just a "whim" of mine.

I had an idea, and it required some packs of beadboard planking. We had put lovely bead board planking around the bathroom in our house in Chilton.  We installed it as wainscotting with a trim piece along the top. It came out so cute and adorable, really old fashioned looking. It was a great way to update to that bathroom, to restore it back to original 1914 era, and get rid of the ugly 1950s plastic tile that was in there.

Here is the bathroom from our Chilton house:

But I would do white in this bathroom in Oconto.

The thin bead board planks I want are sold in packages of eight foot lengths. Six pieces to the pack. Each piece is two strips of the board and groove pattern. They are 3 9/16" wide. It is real wood (pine) and not printed paneling.

Steve knew it was something on my "Someday Supply List" to do this project again in this master bathroom.

Last night, after he found his French doors, he spotted someone selling 18 packs of the exact plank pieces I needed! The price was less than half of new! This is 108 pieces of beadboard planking.  Yayyyyy! 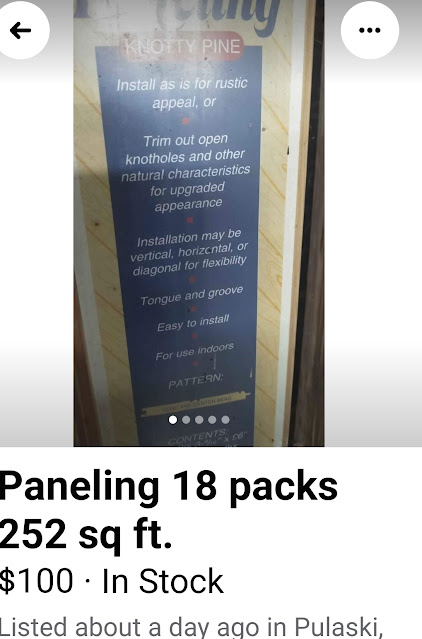 It's the exact same stuff I would have been buying sometime this winter.  Boy, he sure is a good Marketplace shopper. 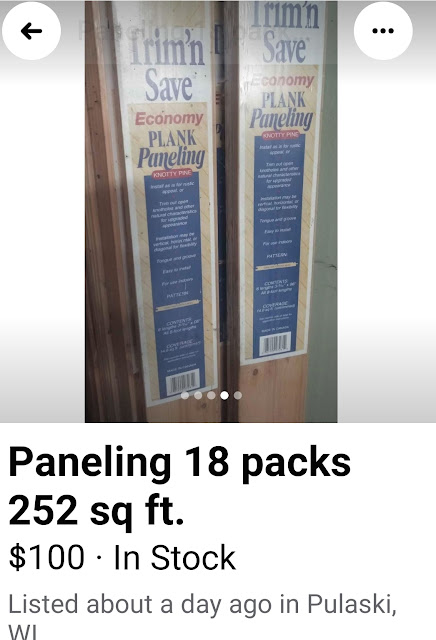 This was very exciting to me. Originally I had only thought to do the area around the bathtub. I was a little concerned about any splashing from the tub getting on the wallpaper. Especially with the handheld shower device that I sometimes use to rinse my hair. Or the splish splash of grandkids having a bubble bath. By putting this beadboard up for the first four feet, it would protect the wall. Plus, I think it would look absolutely adorable. Steve said there is more than enough wood in this batch to do the entire bathroom, all of the way around. That will be even more harmonious and look less patched together. I really like that idea.
Then there will be enough leftover to probably do the small office room as well. Even if we have to buy a couple more packs to add to that room later, we know we at least have enough to get a good start on at least 3 of the walls in there.
We contacted the seller and made arrangements to go first thing this morning to get the planking pieces. Our children happened to borrow our little trailer because they were using it to haul drywall up to the cabin.
But Steve measured and we know we can haul 8 ft long things in the Saturn. If we flip down the passenger seat, we can lay the boards in on an angle and it allows us to close the back hatch.

This does cause a slight problem for me though. As a passenger, my seat has now been taken up by 18 packages of planks. So where am I? I am wedged in on the folded down back seat behind Steve on the driver's side. I know it's not entirely legal, but it was only for 20 miles back home.

We backed up to the garage and before I could untangle my legs from behind the seat, I gave Steve the phone to take a picture of me and where I was riding. Sometimes you just got to sacrifice, so you can get what you want!

We unloaded the planking into the garage where they are stowed away---- until we are ready to start that wintertime project.

Here is the master bathroom with a couple wide angle shots, which kind of distorts a little. But envision 4-foot high beadboard all of the way around the room.

I think it will look really cute. Plus I think we will use the router and cut some V grooves in the doors of the cabinetry over the toilet to make it all match.

Here is some of the top trim profile that we will use around the top edge of the beadboard. It is kind of a chair rail effect. The bottom will be butted up to the wide baseboards. 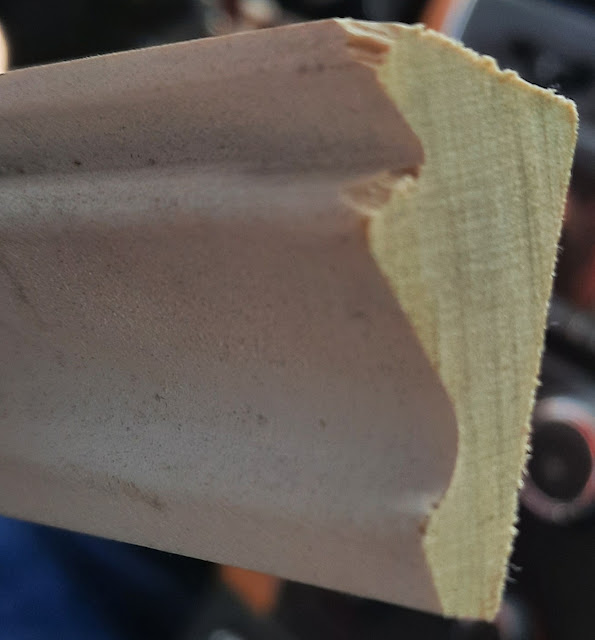 We ate a quick lunch after picking up the planking. Now we are enroute down to get the french doors. They are a little further away. We hope they are what we are looking for!

We have the doors loaded up and we are heading home now. This is the first time ever buying things on Facebook marketplace where the seller was late to the meet up location. There were two other sets of buyers also waiting at the warehouse where she had the items stored. After some miscommunications and delays, she arrived to conduct the transaction. She also nicely allowed us to bargain down 20% off the price. We only paid $80.

Steve says we got paid $10 a piece for waiting. LOL

The wood was in a little rougher condition than what we could see in the photos, but it will easily be puttied up and sanded down before we paint. If we had wanted to keep them natural, I think it would have been a problem.

In the sellers ad, she never said it was beveled glass---- That makes it even better! Each door has 15 pieces of beautiful beveled glass separated by brass caning.

The doors are pretty heavy and were made in Canada. I think they will work out perfectly for what we want.

The seller helped load them up and we got them wedged into the back of the Saturn. This time I don't have to ride in the back, there is room on the passenger side and Steve still has visual access to his side mirror.

Home now.  In the garage and ready for some putty, sanding and painting when Steve wants to tackle this project.

Posted by KarenInTheWoods at 3:03 PM