Here we are all nestled in at Chalk Hills Campground, just west of Daggett Michigan. I spoke more about the campground in yesterday's blog.  At the bottom of this blog is an "older blog" link to click on to bring you back to that one.

Friday afternoon, the other campers all started rolling on into the campground. Every single site was reserved. Although the sites are spaced far apart, you could see other campers here and there as they each rolled into their places. It was still nicely quiet, cuz people weren't yet gearing up for their weekend adventures. A lot of them had separate vehicles towing ATVs or  UTV's (side-by-sides) vehicles.  We were seeing more older folks unloading their rigs, and getting their sites set up. Not too many young ones or families.

The trees were beautiful, the weather was going to be pretty good for the weekend, I can see why everybody wanted to get out for another weekend of camping. We were only planning to stay until Saturday morning, so some lucky person will drive into the campground and find our vacated campsite tomorrow. Won't they be happy?

Our grown kids own a cabin nearby, about 12 miles away. We waited until they got up there for the weekend and settled in. Then we drove over and grabbed the oldest granddaughter, Chelsea. She came to have an overnight with us in the motorhome. It was her turn. In between some fun games of Yahtzee, she baked up some cookies.

Baking in an RV oven can be a challenge. They are known for creating hot spots in the middle and baking unevenly around the edges. We laid a heavy pizza stone down in the bottom of the oven on the panel just above the flame burner. It helps to disperse the heat more evenly. Also, baking with parchment paper helps,  because then the cookies don't stick or burn too easily to the pan. 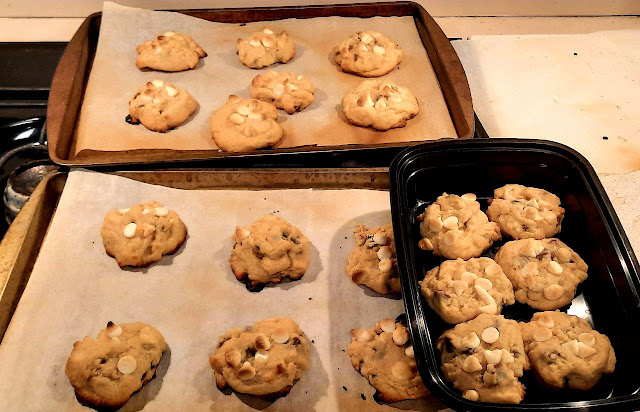 Chelsea did a good job,
and she said the best time to taste test a cookie
is while it is still warm! 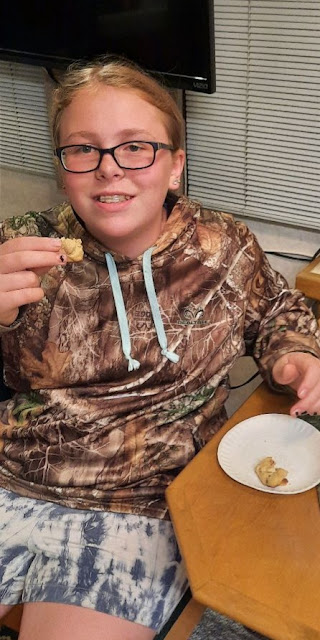 She let Grandma and Grandpa each taste test a cookie too. But the rest of the cookies were packaged up to take to the cabin tomorrow for the rest of her family. 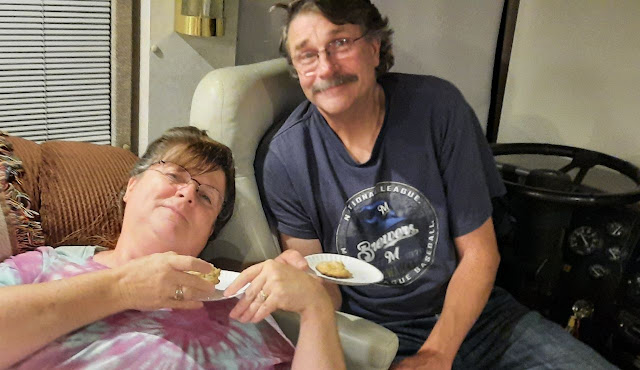 In the morning, we woke up to a hazy cloudy foggy day. It felt cold and damp. I'm kind of glad we weren't paying to camp for another day or two because the weather was not cooperating. This was not forcast. Steve unhooked the power cord and got the jacks up, while Chelsea and I got the rig "roadworthy" on the inside.

The woods looked almost spooky with the foggy mist drifting among the tree trunks. But in a way, it had its own type of beauty. I felt bad for the people who were all excited to go trail riding. Their day didn't look too promising. But we weren't staying, we were heading over to the kids cabin to help them out with some projects.

Since the cabin was only 12 miles away, it was easy enough for me to just follow the motorhome while driving the Saturn. No sense in hooking it up, just to go that short distance. As I followed behind the motorhome, all the leaves were blowing off the roof. It was like a snowstorm of colorful leaves floating down twisting and twirling in the air as the motorhome drove down the road. I shot a quick video through the front windshield, but most of the leaves were already off by the time I was able to do this:

Chelsea rode up in the passenger seat and was the "co-pilot" for Grandpa.  She was manning my air horn button and got to blast the horns at 3 different flocks of wild turkeys on the road!  She really enjoyed doing that. Glad Steve was able to fix the button.  I caught a picture of them through the windshield as they turned around to park right in front of the cabin.

Steve got right to work with son-in-law Waylen. They were putting up a wall under the stair case to make a closet.  Then they planned to add insulation and drywall on parts of the actual exterior walls.  The kids are converting a new garage unit into a complete cabin. The upstairs portion is already done, with lovely knotty pine and nice finishes.  Now the main floor is the next task to take care of. They already added well, septic, and now the bathroom and kitchen areas are being dealt with.

Littlest puppy dog Biscuit get so filthy dirty at the cabin.
But she sure has fun! 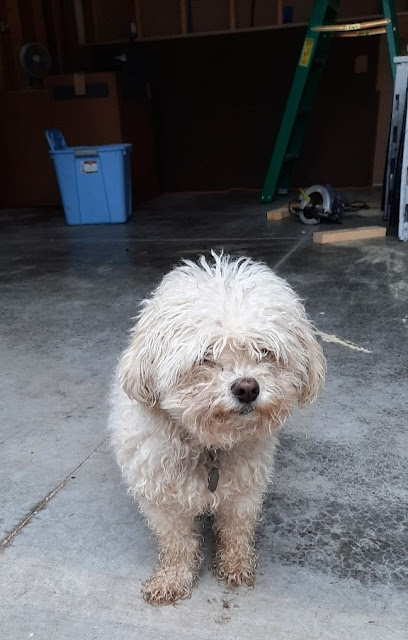 Son-in-law Waylen had made up a big crock pot full of chili for lunch. They had it simmering all morning while the guys worked on the walls. The grand girls helped me cut up vegetables and daughter Erin set everything up for a little impromptu buffet, right in the open workspace.

The bowls of hot chili were just perfect on a cold damp day. Waylen is a good cook!  Both dogs kept a careful eye on Chelsea's dish, waiting for a handout. They are pretty smart dogs. 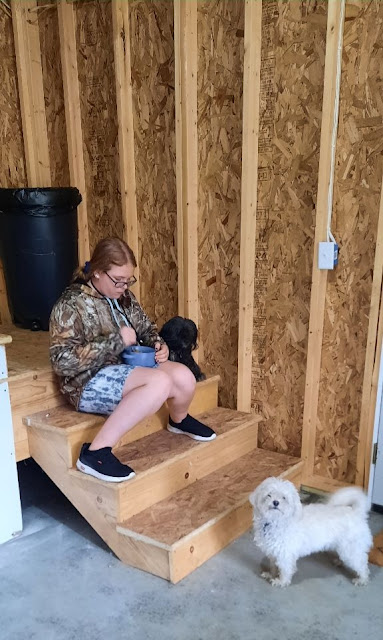 Claire showed us grandparents how to put Fritos and cheese in our chili, and eat it quick before the chips get mushy.  What a silly girl. 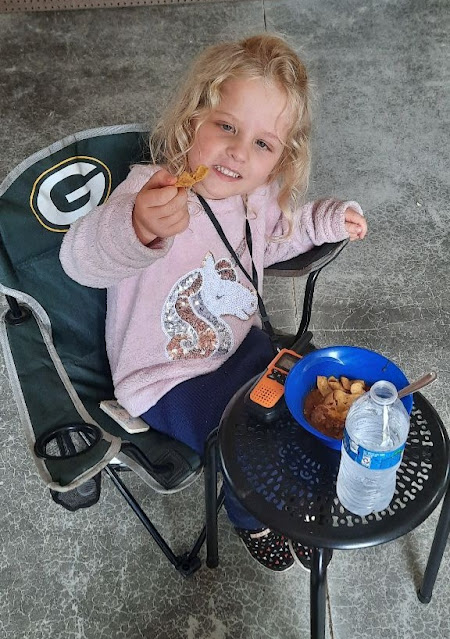 Back to work!  Everyone got into the act too. The guys were finishing the back wall, and it was time to start installing the insulation, Daughter Erin and granddaughter Chelsea worked on doing all of the stapling. Section by section, they worked their way around the cabin adding the new insulation. 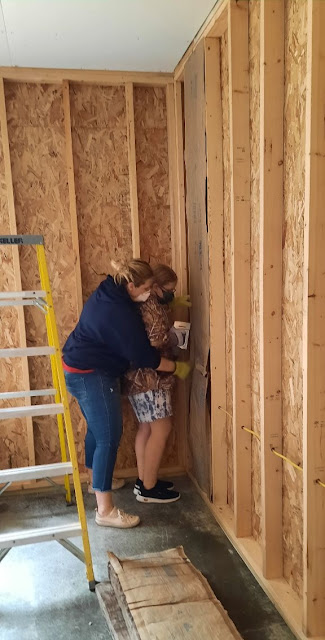 Little Claire kept herself busy with all the cut off ends of the construction two-by-fours. Out of the shapes that she found, she made a cell phone for herself, complete with crayon drawn buttons for volume and on and off. She also drew little icons on the front of it and a camera lens on the back. She also made a school bus, and some slides for playground equipment for her little teddy bear. The round piece became a merry-go-round. Soon her whole playground was complete. My oh my, what an imagination!

Chelsea worked hard stapling all of the insulation onto the two-by-fours. She also learned how to refill a staple gun, and how to help and create memories.  She will always remember building on her cabin, right alongside her mom and her grandma!

Claire even got into the act and was helping to roll the insulation bales over to the area where they would be cut to size by her Daddy and Grandpa. 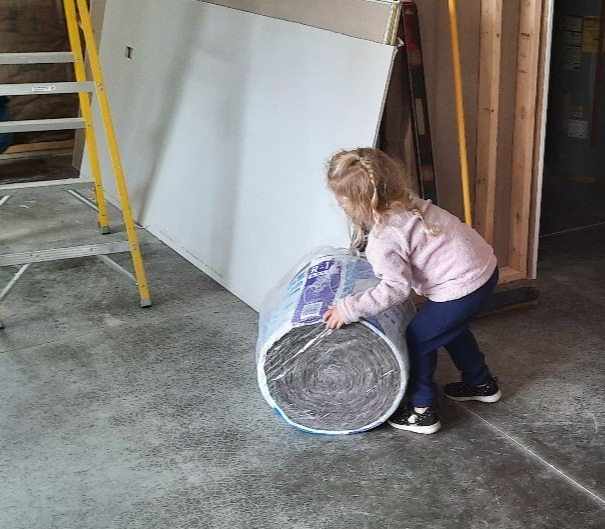 Grandma even got into the act and did some stapling when Chelsea's hand was getting sore. It was a pretty strong staple gun for an 11 year old. But she did quite well.  I just filled in for her while she took a break. 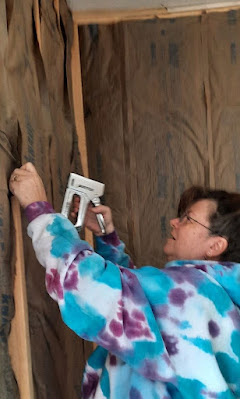 Claire was in charge of bringing all the cut off scraps of wood out to the camp fire pit. She sure was working hard and would load up her little wagon, one piece at a time. It was her job to haul them over and unload them too.  Everyone got a job, except grandson Clayton who was over at his other grandparents house to help them.

I was quite proud of Chelsea pitching in and working hard on the family cabin. She will always remember how she helped to do the insulation and how the walls looked before the sheetrock went on. Learning about things like studs and how to cut out for electrical outlets and light fixtures, she can understand what goes into building a house.

Soon enough of the walls were insulated it was time to start thinking about putting up a vapor barrier and then some drywall.  It already felt different in there by getting up the insulation. It was cold damp day, and even with the big door open, the heat was retained in the main area.

Little Claire helped sweep off the plastic vapor barrier where there were some dusty footprints on it. She got rather upset at her daddy and grandfather for stapling it up before she could get all the footprints swept off completely. But once it was up on the wall, she decided that it was a backdrop curtain of a stage so she could sing us a song. Tah Dah! 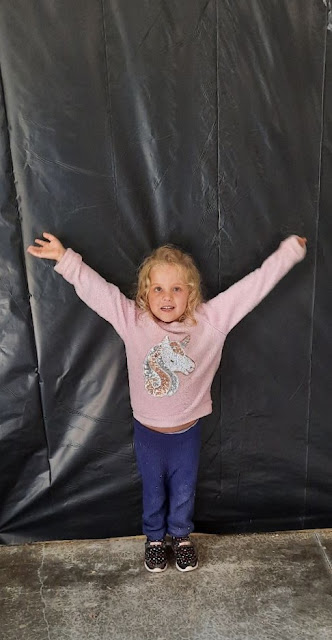 Sheet by sheet, the drywall started going up. It really made a difference on the walls. Everything seems so much taller and bigger. This area will become a kitchen with the sink underneath the window. It is going to be a great family cabin for weekend getaways, and the insulation will make it very cozy in the winter months.

Once all the available drywall was hung, it was time to say so long and we would head on home. They will get more drywall sheets later in the week and work on more of the cabin later. But for now, we got as far as we could go.
We hopped back in the motorhome and headed south about mid-afternoon. The sky was still hazy and dark but it hadn't really rained. I guess the weather men were wrong. They had been talking about sunshine and blue skies. Must be nice to have a job where you can be wrong half of the time and still have a job? It either rains, or it doesn't rain. LOL
We will stay home for a few days, we have hair cut and dentist appointments to take care of, but then we might load up and get away for a few days before the weather turns colder.
We got home, unloaded the motorhome, and put things away.  Then we buzzed up to Marinette and got more fencing and posts to start planting the 3 new trees tomorrow.  Maybe we will get them done and planted before the Packer Game at noon.  Stay tuned!
Posted by KarenInTheWoods at 8:11 PM