On Sunday, we checked the weather and decided that the next two days we're going to be unseasonably warm in beautiful Wisconsin. We thought that it might be a good time to get up into the woods.

The motorhome was pretty well loaded up already from last week. All we had to do was load up the cold/frozen food in the fridge, some more beer and wine, and we were ready to take off.

Monday morning the thermometer said it was a very cold 32 degrees!!! But we didn't care, we were heading out and going north.

We hooked up the Saturn to the motorhome, double checked all of our connections, and headed out. It's good for each of us to double check what the other one has done as far as the hookup procedure. A second set of eyes on everything it makes us extra safe.

The sun was shining and the skies were blue. The weathermen were saying perhaps it might even reach 70 degrees!

We really enjoyed the nice leisurely drive on a Monday morning after all the rush traffic was gone from the highway. 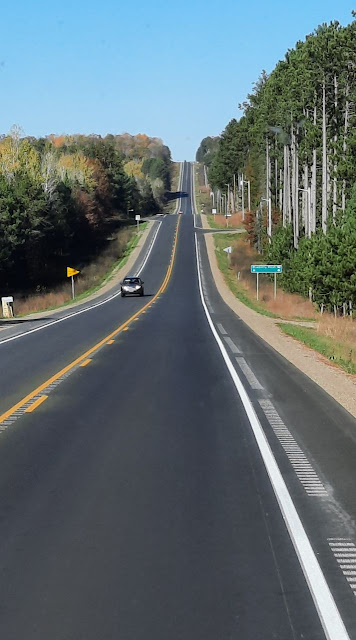 The campground we were aiming for is one we had never been to before.  It is called Goodman Park,  in Marinette County, just south and east of Goodman, Wisconsin. We saw on the GPS there were some back roads to get there, but we decided to go up Highway 141 and cut to the west on Highway 8. We THOUGHT that would be the best paved roads (we were wrong).

Just after Dunbar, we started looking for the signs for Parkway Drive. I know that Parkway Drive is paved further south, around my brother's cottage area. But this far north on the same road, it's all GRAVEL!!!  UGH!!

It even says it's a county trunk road, called County I. But it's danged gravel. 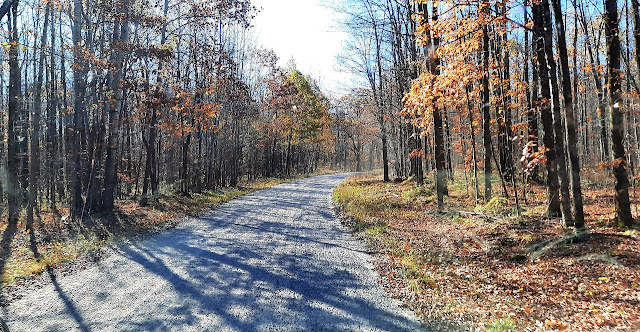 Why does this bother us? We really do not like driving on gravel with our motor home. The diesel engine is in the rear, and the air intake at the rear side. The dust is quite harmful to the turbo, and to everything else. Although we have a good air filter, they are rather expensive to swap out, in the $200 range.

We drove slowly, taking our time.  The gravel road was in pretty good shape, but dusty. We had to do 10 miles of gravel road to reach the campground. 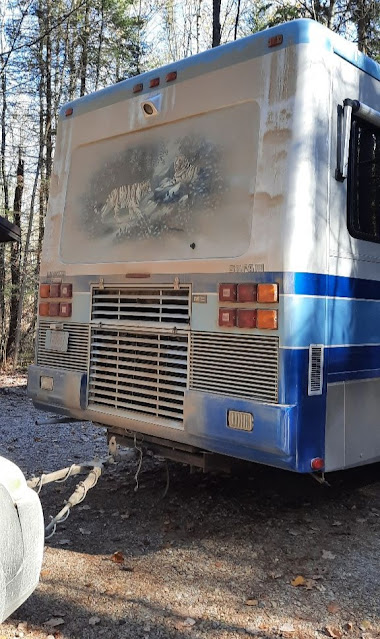 This is what we ended up with!!

Right before we reached the actual campground entrance, the road switched to pavement!

Later on, talking to some other people, they said this road from the south, all of the rest of the way back out to Silver Cliff is pavement, and it's the best way to reach the park.  Instead of doing like we did,  coming in on the gravel from the north on Parkway Drive. We will remember that for next time.

We unhooked the Saturn from the back of the motor home at the parking area. We took the dusty Saturn around the single loop of 15 campsites. There was only one other tent set up, with a couple from Porterfield, Wisconsin.  We chose site number 3 because it was the most wide open, with the best solar exposure potential.

The campground consists of a loop of 15 campsites and one large group site. There are very nice clean pit toilet's but no shower facilities or flush toilets. All of the sites are level and big-rig friendly.

When checking in at the little self registration post, the envelope includes two vehicle permit slips that get attached inside windshields of your vehicles. We have one in the motor home and one in the Saturn. The third slip goes on campsite post.

Campground fee is $15 per night, no hookups.  Included in that fee is the $5 per vehicle permit fee that you normally pay just to enter the park as a day use person.

Sites can also be reserved here by calling this phone number  715-732-7530 or going online at their website.

At the entrance to the campground there is a dumpstation and also a fresh portable waterfill post. These are free of charge for the registered campers, but there's a $5 fee if you are just passing through and using their facilities.

Throughout the campground are small sections of multiple recycling garbage cans, but no big dumpster at the end of the park. Sometimes that type of situation draws in bears and raccoons, so keep your food situation clean and don't attract the little scavengers to your campsite.

Cell phone reception is spotty for data, and the local NBC tv station from Rhinelander comes in faintly during the evening, but fades out later at night and in the daytime.

I know that readers wonder if they can get a cell phone signal, otherwise they probably won't camp here.

Near the entrance of the park is a large grouping of beautiful old wooden structures. These were constructed by the CCC during the years of 1936-38.  The CCC was the Civilian Conservation Corp program which allowed young men to find a way to earn money for their families recovering from the great depression. These men could go on work crews into the northwoods to help construct infrastructure like parks, roads, bridges etc. They could earn a good wage and send money back to their families in the large cities. We were watching a program one time on PBS about it and some of these men had never even been in the woods or out of the city in their lives. It was quite an eye-opening experience for them. Not only did they learn a skill or a trade. but they also earned an appreciation for the woods and natural resources that our country offers.

These buildings can all be rented out for parties or events. They all appear to be a very well-kept condition. 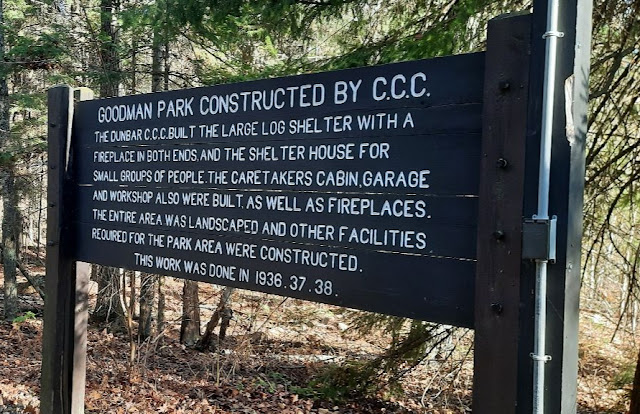 Long ago, many county parks had caretaker cabins and somebody would have the job to be on site to care for the park and oversee the other workers.  What an enjoyable job that must have been to be able to live in these beautiful log buildings and be part of this wonderful array of such a nice recreational area.

We took a walk down along the waterfalls and surveyed the public picnic area of the park. It was so pretty.

We walked down amongst the picnic grounds and the footbridge over to the other hiking trails on the other side of the Peshtigo River. 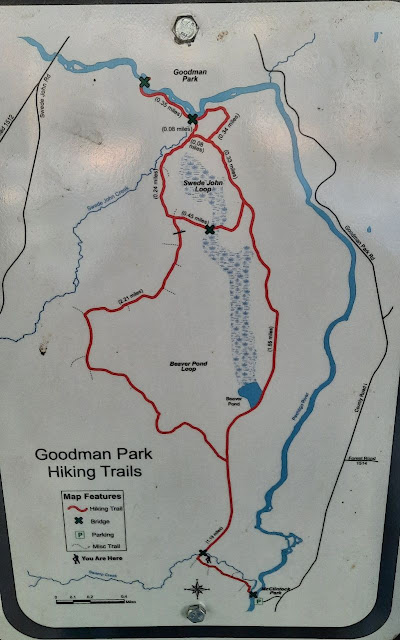 We spotted this artist working on a painting.  I snuck a photo of her.  I didn't want to interrupt her to ask permission,  but I figured it's from her back side so we don't see her face. It just shows what a beautiful attractive place this is along the waterfalls.

One of my fellow Facebook buddies and blog reader asked me a question this morning. She asked if we use cell phone signal booster when we are up in the woods.

When the signal is this weak, I use my Wilson signal amplifier. It's a device that runs on either 12 volt DC or 120v AC. It has an antenna that needs to be attached to a ground plane.  Our motorhome is all aluminum so there's no steel. But by attaching it to this metal tray it seems to help pull in the signal.

When setting the phone right next to the gray box, it can increase a single bar up to two or three bars. But if there is no cell phone signal whatsoever it doesn't do a thing.

In these photos below, see the difference it makes setting the phone next to it? 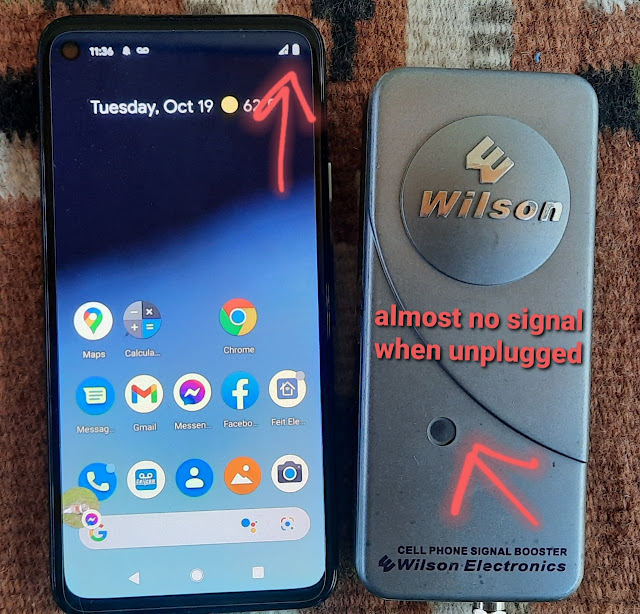 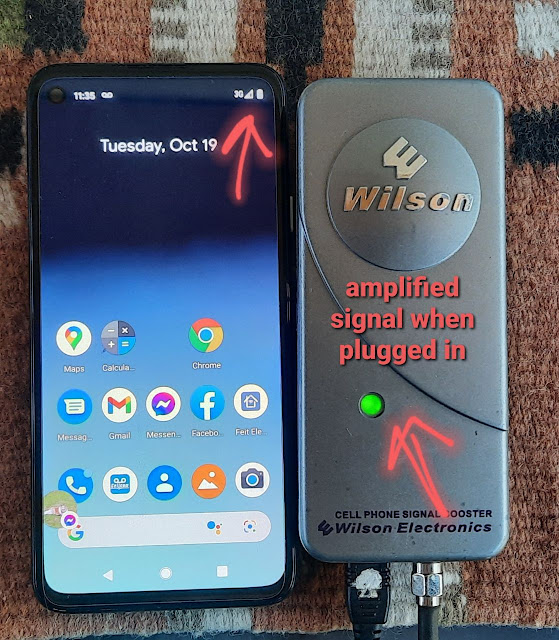 Once we boost the signal, we then set the phone as a tethered hotspot and we can connect our laptops or other cell phones or tablets to the signal.  But the main phone needs to set right next to the gray box to receive an amplified signal.

The weather on Monday afternoon was absolutely gorgeous. There wasn't any breeze, and we were surrounded by beautiful soft golden sunshine.  We relaxed outside in our recliner chairs and just took some time to wind down and listen to the birds. Faintly in the background we can hear the sounds of the waterfalls nearby and the rapids further upriver. Steve tossed some burgers on the grill for lunch and food always tastes so much better when we cook outside. We happened to have one of the last few ripened tomatoes from the garden to put on our burgers with some lettuce.

Like I said earlier, we chatted with some people who are also here camping in a tent.  They had two black rescue doggies who came to visit Binney. She stayed pretty close underneath my chair while they visited. Lol.  We exchanged information to see if maybe we might camp up here the same weekdays again and camp closer to each other. We had a lot in common and they were very nice!

Towards evening, I started to make up a good filling supper. Previously at home, the night before, I had made a big pot roast beef with carrots and potatoes.  I saved all of the leftovers to take along and make a hearty beef stew. I shredded up the roast beef into smaller pieces. I saved the juice from the roast and added a few envelopes of brown gravy mix and a couple tablespoons of cornstarch. As that heated up on the stove and thickened, I was chopping up the leftover potatoes and carrots into smaller pieces. I added a handful or two of frozen peas. Soon everything was simmering on the stove. My oh my, the camper smelled so good!

We had a hearty "stick-to-your-ribs" dinner of stew with buttered bread on the side. 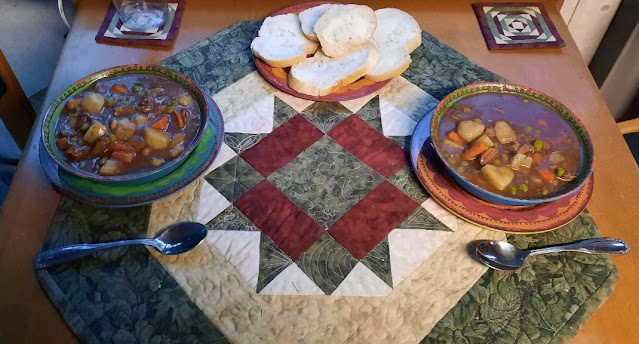 After dark, the temps were dropping quickly into the low 40s. We kicked on the Olympian Wave 8 Catalytic heater for the night.

We run this type of heater instead of the large propane furnace with the in-floor ductwork when we go camping without hookups.  That large furnace utilizes a lot of battery power draw for the vent blower system.

This Olympian Catalytic Wave 8 heater works much better and doesn't draw any battery power whatsoever. It has three settings, it is not thermostatic--- just low medium and high.Normally when we are camping at about 50 degrees or so, we can set it on low and we are quite toasty.

We know it was going to get down into the 30s overnight,  so we put it on medium.

If the temperatures were going to go below freezing, we would use the big propane furnace because it has basement ductwork. That basement heat would prevent our water lines and holding tanks from freezing. But it wasn't going to get that low.

It was very comfortable sleeping overnight, and we woke to 38 degrees outside, but a cozy 67 degrees inside.

Normally Binney sleeps down in the corner on the floor by my side if the bed.  It's the coolest corner of the rig.  So we popped her up on the bed to sleep between us at the foot of our bed. She seemed to appreciate it, and was quite happy this morning to snuggle in and not wake up until after 7:30. 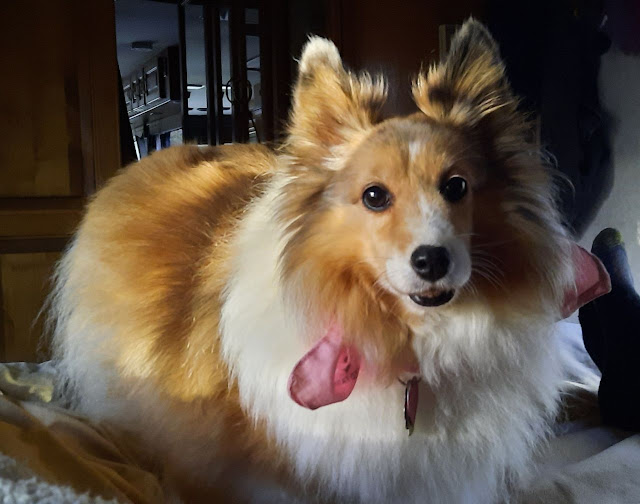 Tuesday will be in the next blog....

Posted by KarenInTheWoods at 8:23 PM