I guess it was a good idea to come home from camping. Both mornings have been at 32 degrees with frost on the ground. It hasn't even gotten above 50 degrees during the day. I think we would rather be at home and work on projects and be comfy than trying to enjoy time in the woods when it's this cold. It has been raining almost constantly since we got home. With these kind of temps, it could easily turn into snow.

The other added plus for being home, our son-in-law Jesse asked if I could watch Whitney for Wednesday evening. We invited over her little cousin Claire as well. These two girls sure kept us busy!

Here they are pointing out their names on the "Grandchildren Sign" made by our daughter Erin and son-in-law Waylen.

We decided to bake some brownies. Whitney has a special way for breaking the eggs. Here is her first video she made with her mom, telling us how.

(It was on Facebook and I didn't know how to transfer it into the Blogger format. So I videoed it playing on Steve's phone so I could insert it here)

Here is the video that we made of our attempts on Wednesday. It works out pretty good and you don't get any little pieces of shells.

They helped follow the recipe and took turns adding each of the ingredients. They very carefully measured and poured everything into the bowl. Baking is wonderful when they can learn about things like math and also learning that things don't just come from a store. You can create them at home just as well.

Often homemade things taste better than store-bought. Plus, there are usually leftovers.  We always leave more than enough batter in the bowl so they can enjoy the extra with the spatulas.

Isn't this the best part, being able to eat the leftover batter? I have fond memories doing it when we were kids, but we had to make a bowl stretch out among six kids!

While the brownies were in the oven baking, these two decided that they needed to be veterinarians and take care of all of the stuffed animals.  They spread out all of their patients in the guest room and took out all of their doctoring tools. They were very concerned over each patient that came into their veterinarian office. Elaborate stories were made up about each case.  But the brave veterinarians saved each and every one!

Next activity on their idea list was that they were going to write letters. We dug up a stack of odd-sized little envelope that I wasn't using for anything else. They took out the crayons and the colored pencils and started writing cards and letters for people that they know.

Whitney was delivering letters to Grandpa down in the she shed. He got a whole stack of wonderful envelopes and notes.  He had to read each one,  and then they took the notes back to re-deliver them all over again.

Claire was busy bringing all of the little cards and letters to each room of the house. Every place had a new address and she was being the mail lady. I am sure that I will find more letters throughout the week as I clean house from room to room. 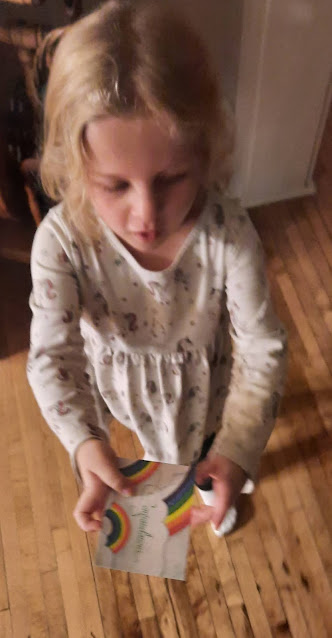 Speaking of rooms, both girls love to play in this cute little Hideout. It is actually a built in cabinet for storing wood next to the fireplace. Because we no longer burn any wood in the fireplace, it's a great little hidey-hole room. They go in there with little blankets and pillows and flashlights. It's a wonderful little hiding spot and they also wrote their names and messages on the walls inside with magic markers. Kind of like a time capsule for kids to find in the future.

Little Binney got a lot of attention too. She came out to hang with the girls on the couch and to see if they had anything good to eat. The brownies were almost done baking, but dogs can't have chocolate. Both girls each have 2 dogs at home, and Whitney also has a kitty cat.  Binney was checking that out, I am sure.

The brownies were done but we had to cool the pan quickly so we could get them frosted before the girls had to go home. I was able to stuff the whole pan into the freezer to cool it off. When it was sufficiently cold enough, we spread the frosting on top. We cheated and used a store bought can of frosting instead of mixing our own this time. I didn't have any chocolate powder to make it from scratch. The girls both took care of adding an abundance of sprinkles to the top of the brownies. What fun is it to bake at Grandma's, unless you can put sprinkles on top of it!

Soon it was almost bedtime, and both girls had to go home. There was school the next day. We cut up the pan of brownies and sent a container home with each girl to bring to their families. And there were a few left for Grandma and Grandpa as well. We will have to arrange a sleepover sometime on a Friday or Saturday where they can spend the night together. Their parents came and picked them up. It was quiet again in the house. Too quiet.
~~~~~~~~~
Thursday morning, Steve was anxious to get started on the interior trim for the new window that we put in last week. It was raining and miserable outside. Perfect for working indoors!
Last week, he had already cut the wood to length out in the garage for all of the window trim. I gave it a coat of primer and a couple coats of paint out there while laying flat on the sawhorses. It's much easier to work with pre-finished wood inside. I don't have to paint primer and two coats of paint all while positioned vertical on the wall.  No runs or drips either. Then all he has to do later is fill in the nail holes with little dabs of caulk or spackling. I can give it a final touch-up once it's all done.

Using tiny finishing nails in the air powered nailing gun works really well to put up the trim. He has a portable air tank so he doesn't even have to haul in the big air compressor to do this type of trim work. I will have to paint the inside edge of the spacers he needed for around the window. Old houses are never perfect, so he needed spacers to get everything to meet up perfectly with the level of the plaster wall.

By afternoon, the sun started peeking out and we had some blue sky!!!  The new window sure brings a lot of light into the bedroom. I still have to trim off the excess strings on the venetian blind where we removed the unneeded slats. 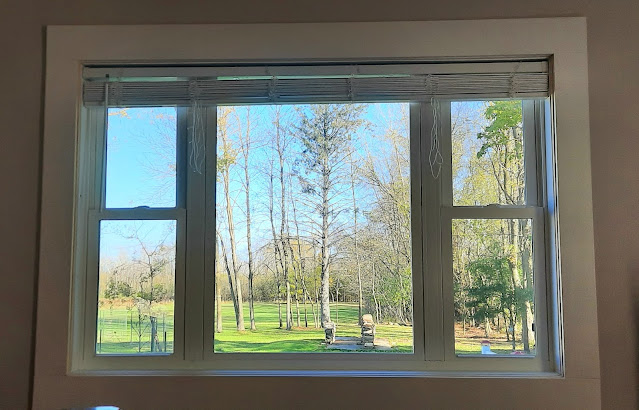 By trimming out the window all the way around it makes it appear even bigger than before. I really like the view into the backyard. 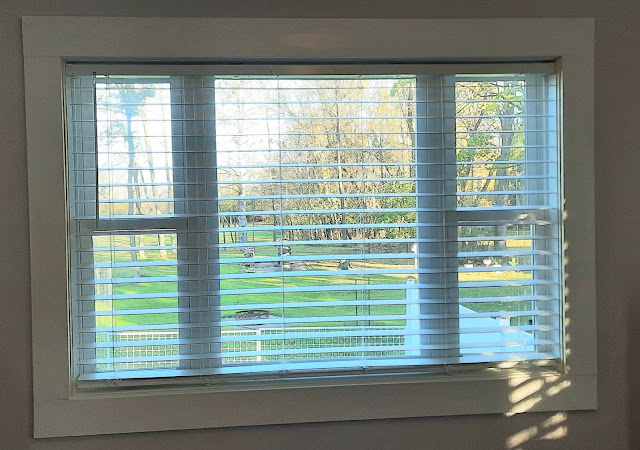 Now Steve will figure out the complex cuts to do the top crown moldings and the sections of egg and dart trim. Here are some of the vintage pieces throughout the house that we are going to match. 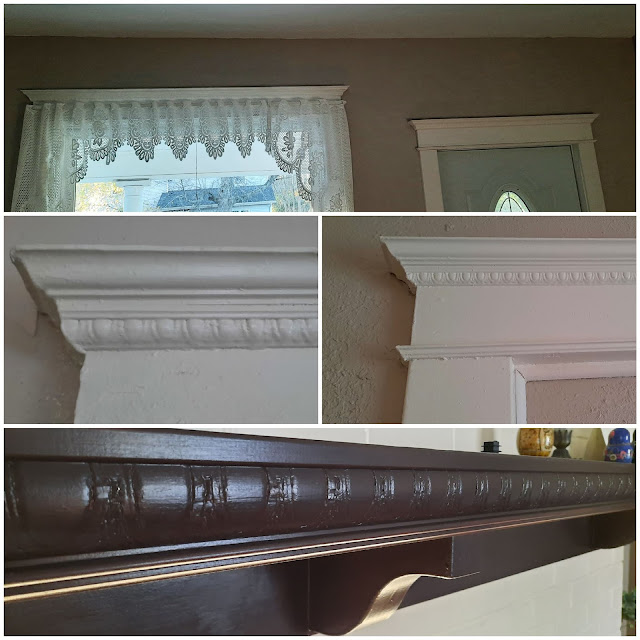 We are going to try to recreate the same thing for over the top of the big window as well as the top of the new double closet trim in the master bedroom. That was never done when the room was reconfigured by the previous owners. It will be nice to make it all match. But not doing anymore on Thursday, that was enough work for the day.

Friday morning, Steve decided to do one more little project in the master bedroom. We have this little section of short wall between the new window in the closet. It's just perfect for this narrow tall oak cabinet. But I needed an electrical outlet behind it instead of running an extension cord. Steve took care of measuring and figuring and started cutting the hole out with his plunge blade on his oscillating tool.

When he started fishing the wires up through the wall, little Binney got very concerned. She was pacing back and forth and sticking her nose by the vent trying to figure out what was in the basement coming up through the wall! She was absolutely sure it was burglars! 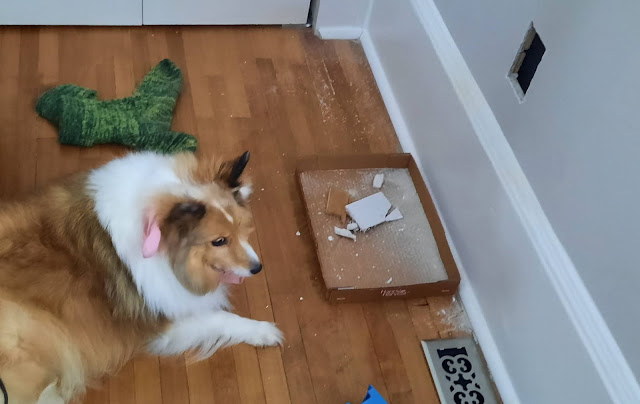 She fretted and fussed and whined and barked. Good dog Binney! You protected us from the burglars....
Soon he had the outlet all wired in and hooked up correctly. Now I could just run both cords directly to the outlet without using an extension cord. One is for our alarm clock in the other is for this pretty little stained glass lamp. I have it on a timer so it comes on in the early evening and shuts off at 11 p.m. after we go to sleep. It is just enough light in the room as we come and go, in and out, or get ready for bed without turning on the overhead light.

And there it is, set in place. The cabinet can't exactly be centered on the wall because we need clearance for the bi-fold closet door. But I think that it works well in that spot. Better than just leaving it blank. Once we finish the trim and I put up some lace valances on the window, it will kind of fill things in.

Now that project is done,

and this blog is complete,

it's time to make some late breakfast / early lunch.

I wonder what kind of trouble we can get into this afternoon?

Posted by KarenInTheWoods at 11:28 AM