We had a relaxing Tuesday evening at home. We caught up the laundry, refilled a couple things in the motorhome, and topped off our water tank. We cooked a nice dinner and enjoyed some time around the campfire in the backyard. So funny, here we went camping for seven nights and never lit a campfire. But then we get home and light one? We are so silly. 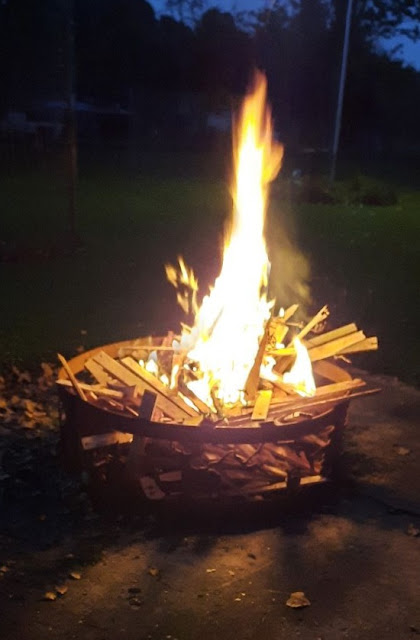 It was funny to be sleeping back in our own bed at home, but it sure was nice to open up that new window and look out in the backyard. It was a hazy foggy morning and we enjoyed laying in bed just a little bit longer as the sun came up.

I was able to pick the rest of my tomatoes off the vines and quick process them up in a few quart zip lock bags to throw in the freezer. I think my vines are pretty much done for the season. That way if we do get a frost during the next couple days or so, these tomatoes are safe.

Took care of bill paying, grabbing our held mail from the post office and shipped out some packages to waiting customers from my Etsy store.

Then I had a $10 birthday coupon from Tractor Supply Company. They just opened a new store in Oconto. As we were driving by, we saw that they had trees!

We had already picked up two maple trees earlier last month at the TSC in Marinette.

So this time we found another big beautiful red maple tree, and also a very interesting Japanese maple with tiny deep red leaves. Then I spied a big weeping willow tree. Although willows are very messy trees, I've always liked them. When we lived on the river we had one that hung over the water from the bank and was so beautiful with its long weeping leaves and branches. They grow well in wet conditions. Along the fence line of our property to the north there's always a low damp spot throughout the year. That will be a perfect spot to put this big bushy tree. They grow fast and I'm sure it will be a beautiful addition to our landscaping.

We snapped up all three trees and submitted our coupon for the special sale. Having a chance to bring home three big trees like this for under $75 is quite a good deal.

We soaked the pots good with water and set them alongside of the garage for now. We didn't want to plant them until we can first buy more fencing and posts, like we did to the other trees. If we planted these unprotected out in the far back yard, the deer would have them stripped down to nothing!

As it was, our neighbor said we had a whole herd of deer frolicking around in our yard while we were gone. Don't we know it! Our security cameras see everything. Not only were we getting alerted to deer, but also this morning our front camera was alerting us a movement on the front porch at 6 a.m. I looked at the screen and it appeared to look like rain.

But then I played the video portion on playback mode and it was swarms of bugs! Just look at this:
We finished loading our last few things into the motorhome, chatted with another neighbor, and then we headed out again. We are heading up to a campground near Wausaukee, WI close to the kid's cabin. We might give them a hand with a couple projects on the weekend. The weather report looks kind of iffy, maybe some rain coming.

We noticed on the way up that my extra horn button wasn't working. What is my extra horn button? Well, up on the roof of our motor home we have two of these big loud noisy air horns. It sounds like an ocean liner. They operate from a button on the center of the steering wheel on the driver's side. But sometimes there are situations where Steve doesn't have a chance to blow the horn while he's checking the mirrors on all sides and checking the traffic behind us on the camera, and seeing how he can switch the lane to avoid some stupid merging person that doesn't know how to speed up or slow down!!! Rather than have them crease all the way down the side of our motorhome and have a collision, by having an extra button for the horn I am able to beep at them and wake them up!

Actually, they'll be zooming on down the on-ramp thinking that we should just move over. Well we often can't because there's other vehicles on the other side of us in the left lanes. So the dummies don't know to to merge.... they do not speed up or slow down to adjust their speed to merge into to traffic properly. They just keep on going until they run out of ramp and they think that they should just shove us over.

So as I watch them coming, Steve is busy trying to watch other vehicles around us to avoid a collision. Once they get up alongside me and they have nowhere else to go and they're not even looking around. They are lost in their own little world. I give them a couple blasts with that air horn and it wakes them up and makes them look around and realize they're in a difficult situation!!!

Now they have to back off and slow down to be able to merge safely instead of smashing into the side of our motorhome.

I laughingly say because our motorhome is blue on the top and gray on the bottom that they think we are sky and pavement ---- that is why they don't even see us. We are invisible and they think they can just drive right down the ramp and get onto the highway. It doesn't work that way, does it?

It was a beautiful sunny sky day as we headed north in the motor home. 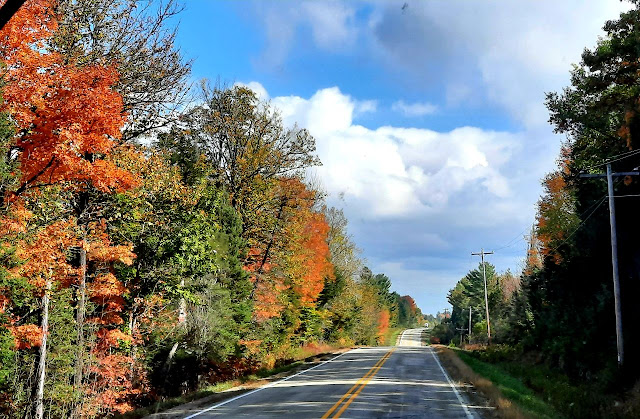 We knew of some beautiful little campsites just over the border into the Upper Peninsula of Michigan. It's called Chalk Hills Campground. Here is the link to their website:

We have camped here many times before. We know it to be a clean well-kept small campground. There are only 25 sites. It is a privately owned campground, and the rates are quite reasonable. It's $17 a night, and they run a special that if you stay six nights you get a seventh night free.

There is electricity at each site either 30 amp or 50 amp on some of the sites, there are two clean outhouses, but no flush toilets or shower facilities. Water is available at the front gate within unthreaded hose bib. You need to bring a "water thief" slide on rubber hose adapter unit if you really want to fill your tank. Best to fill up with water before you get here. There aren't any dump stations, but there is one nearby in Wausaukee if you care to pay a fee.

Although the campground is not on the water, it is right near the Menominee River and a big dam called the Chalk Hills Dam. There are fishing access points all along up and down the river. It is a quiet place with natural settings all around. Some ATV traffic on the weekends, but during the week it is quiet. Be sure to watch out for your food products left outside, there are bear and coons etc lots of wildlife in the area.

We got ourselves settled into a nice site. There were only a few campers around us but most of the sites are reserved for the weekend.
We had some visitors who were very curious as to what we were doing: 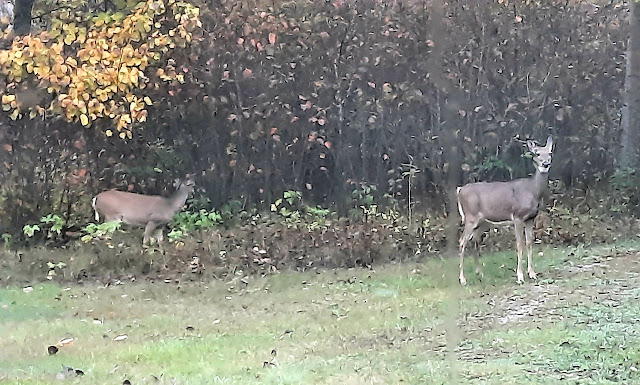 Once we were settled in Steve decided to whip up an early lunch / late breakfast brunch. We like cooking in the camper and he made his specialty again. 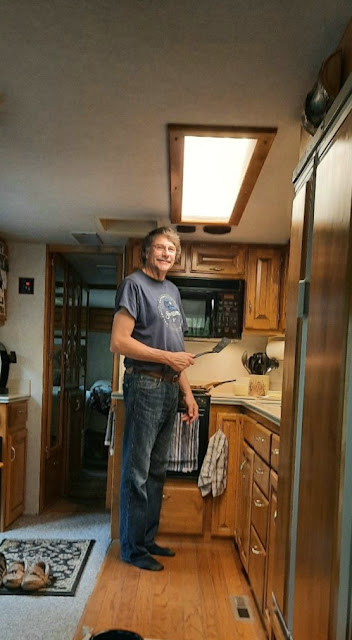 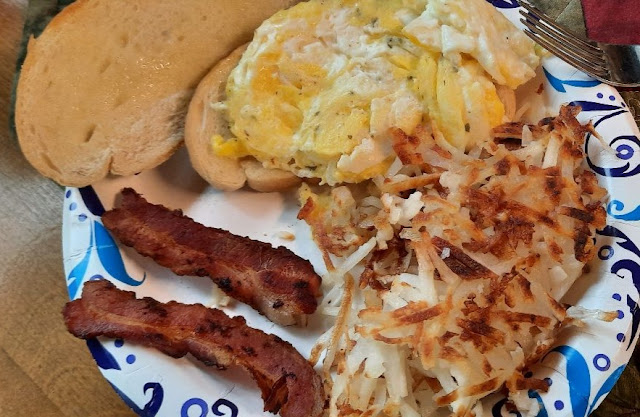 This time we are on campsite number 18. We usually like camping on site number 15, or sites number 4 or 5. Most of the inner ring sites are big rig friendly, and there are a few drive pull throughs. A few of them are a little too tilted for larger rigs like on 19, 21 23 and 25.  But the rest are all pretty good. We have sometimes rented sites 16 and 13 to double up with our kids on the other site and camp together.

The campground is a blaze with color and beautiful leaves are falling everywhere. They are floating down gently. As long as we don't get any heavy winds or storms, it will be a beautiful weekend to camp here. Once a storm moves through, then all the leaves fall off the trees!

We walked around the campground and admired the changing foliage. Binney enjoyed the fact that she got a chance to get out and sniff . Every campground smells a little different and she finds interesting things to snuffle around.

It's nice to see Steve relax a little bit. The mug contains root beer, but if it were later in the day it might have a differant beverage of his choice.

I took out my little Singer Featherweight sewing machine again and started working on more quilt blocks. It's so easy to set up and take back down.  I really enjoy spending a little time each day if I can doing some sewing.

I heated up a mug of apple cider and added a spoon of mulling spices. What a great afternoon treat and smells so good.   It sure feels like fall inside and out! 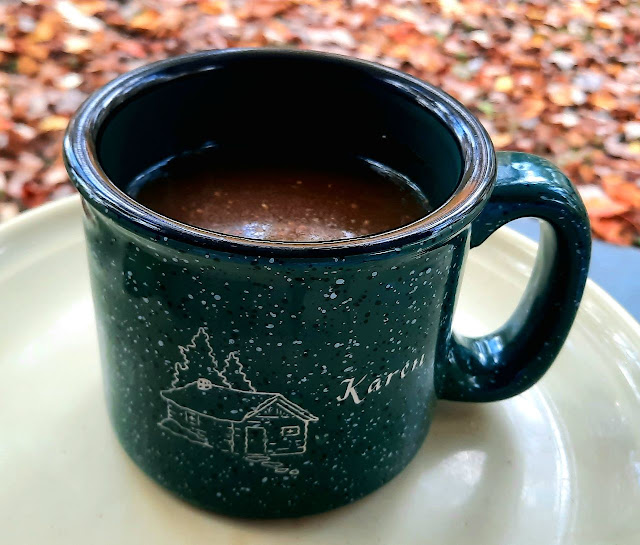 We had a peaceful night, and awoke to rain drops falling on the roof! That is a pleasant sound when you're in a camper out in the woods. Although it means the day is going to be a little drizzly, it was nice to snuggle and sleep in late.  I'm planning on spending most of the day doing some sewing and maybe taking another nap.
Steve is putzing around, fiddling with this or that. He even swept the leaves off the awning and mat. Always fixing or adapting or adjusting things in the motorhome, that's kind of a never-ending thing. He even fixed my air horn button!
I did some maintenance too. I did a complete oiling and gear lubing on my little Featherweight sewing machine. It should be done after every eight hours worth of sewing. So while I took care of my little machine, he took care of his big one. That's why we make such a good couple!!!
Posted by KarenInTheWoods at 1:26 PM