We moved the motor home over to the Black Hawk Army Corp of Engineers Campground on Thursday morning. We paid right away for four nights.

At only $9.75 a night with our America the Beautiful Senior Pass discount, it sure is economical camping. We have 30 amp service, and can fill water when entering the park, and choice of a couple dump stations when leaving. We are still 3/4 full on our tank of a hundred gallons freshwater in the rig.  Our site is well-shaded with big tall mature trees, and a lot of leaves have already fallen.

As you approach the park from Highway 35, you drive through an area that looks a little rougher and more rugged. It is a county-run campground that is full of more seasonal older campers and cottages. Keep driving though, soon you reach the entrance to Blackhawk Corp of Engineers campground. Big difference!

All of the sites are level, clean and big rig friendly. There are a lot of large motor homes and very large fifth wheels around us. The picnic tables are sturdy metal tables with rubberized coating on the extruded metal mesh steel. The fire rings are metal with an adjustable cooking grate. The sites in this older portion of the park are a little closer together. The other portion of the park, which appears to be newer, they are spaced apart further. Those sites are more wide open, in the sun, with young trees. Someday it will grow up and be as shaded as this one is.  There are also many tenting sites located in the far large expanse of the park to the south. Some nice rustic sites are located along the edge of the water near the boat ramp (with no hookups). If it wasn't so darned hot, and we didn't need the air conditioning for my lungs, we would probably take those sites.

The cell phone signal is sporadic and almost non-existent. There's no Wi-Fi available in the park either.

From time to time, we see a barge going up river, churning the water as it pushes its load northward. We saw a big house boat go by earlier. There's a lot of fishermen in the area, and a lot of wrangling of boats up and down the dual boat ramp in the campground.

The parking lot over near there is full of pickups and empty boat trailers.

Friday morning, the forecasted rain held off and it was actually a beautiful day.  We took a ride into La Crosse because we wanted to check out the natural feature called "Granddad's Bluff".

We drove up to the bluff on a long windy snaky road. The scenery was beautiful! 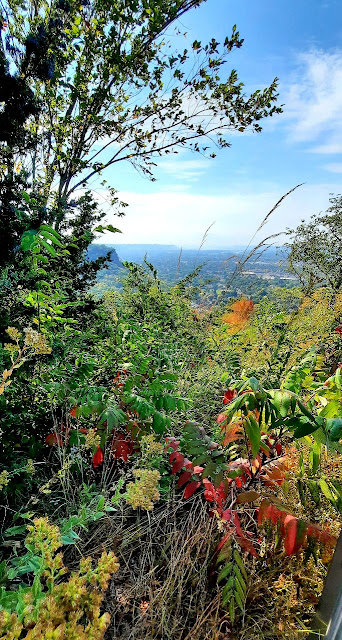 At the top of the bluff they've made a nice walkway with a sturdy steel railing to prevent anyone from going over the edge.

We're not sure if this is a golden eagle or just a young immature bald eagle circling the American flag. 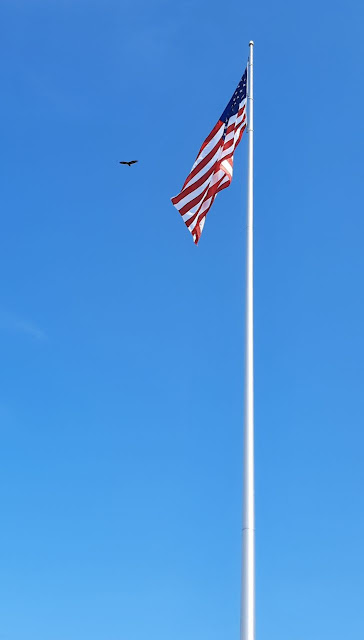 We helped some people take family photos and selfies, and we took a couple ourselves. 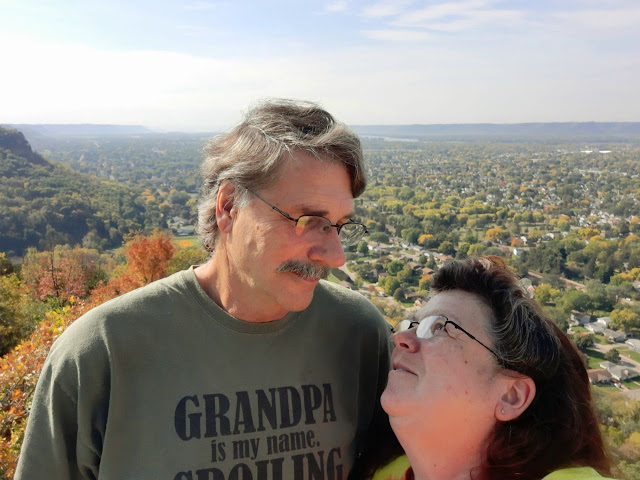 The scenery was absolutely beautiful!

On the way back down, we decided to hit a couple thrift stores that we found on the map in La Crosse.

The first one was a Goodwill and we didn't find too much of anything interesting.  Steve found a nice pair of jeans. He never finds them long enough with a 36 inch inseam.

At the second store, a Salvation Army, I hit the jackpot and found a complete set of lace swags and and panels that match my curtains at home! It was enough for our brand new bedroom window! It is called Heritage Lace and it was made back in the 1980s. This particular pattern has been discontinued.

I have painstakingly collected one piece at a time when I first bought my home in 1985. That is when the lace was new and had to be ordered from a nice drapery shop in Green Bay. I would order it one panel at a time, because it was about $30 a panel. That was a lot of money back then on a single mom's budget.

Now with the new bedroom window, I could use a few new panels if I want to put it up. All four pieces came to a total of seven dollars! Jackpot!

Then we stopped at one more thrift shop before heading through the downtown. This one I found the matching long table runner, and the smaller circular table topper in the same Heritage Lace pattern --- Imagine that?  I usually only find a piece of this lace here or there every few years. It is not very common. I cannot imagine finding multiple pieces in two different thrift stores in the same town on the same day?

While we walked around the neatly arranged shop, I spied a THIRD larger roundtable top lace piece --- but it was underneath the display of crystal and glassware.

I asked the clerk if I could purchase that piece and she right away said "no, it's a display".

So I walked around a little bit, and then I went back and explained that it's a discontinued item that I can no longer get, and it matches the other two pieces I already have in my arms. Then she relented and said "let me ask the manager".

The manager came back and said well, if I really wanted it, I could pay for postage and on Monday when their person who changes their displays comes in, they could package it up and mail it to me.

While we were trying to settle on the price of postage, I suggested that perhaps I could just carefully remove the items on top of it, and replace it with another piece of lace from their inventory, and put everything back very carefully? I explained I used to work in retail and I can be very careful. Finally, they relented.  I took the pieces of crystal off very carefully and set them aside. Then I was able to take out the piece of lace. We found a different lace runner that was of a similar size in their inventory, and put it back on the display. I put everything back just like it was before. Come on, after all, this is a thrift store, not a fancy display at Macy's!

Back to the check out register, now the manager saw what a nice piece of lace it was... and said that it was larger than my other two pieces. At first she said it would be $3.99, then when ringing it up on the register, and she changed again said now it's $5.99!!!!

I didn't care, I wanted it and the other two pieces were only 99 cents each.

So we run out the door with my bag of lace, and I was happy. It pays to be persistent but polite.

Here's a photo of all the pieces when laid out on the bed when we got back to the motorhome so you know what I am talking about. 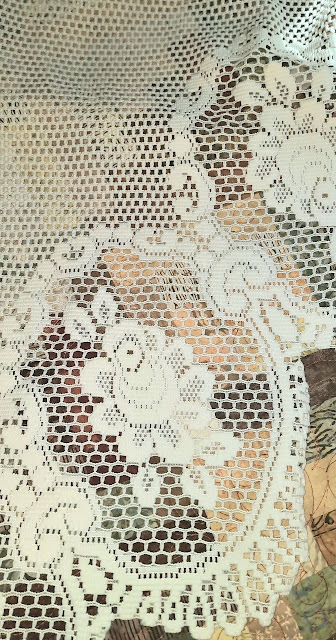 We spent the evening relaxing at our campsite. We had a big slab of salmon to cook up on the grill as well as baked potatoes. Steve likes them sliced thin partially through the potato, then thin wedges of onion between the slices,  added butter and a little bit of oil so it doesn't burn and then seasoning. I wrap it up in two layers of tin foil so it doesn't leak out when you flip them over.

He started the baked potatoes on the grill first as they take a while longer than the salmon.

We teased the fisherman next door, saying Steve caught that slab of salmon out in the Mississippi River. lol!

I also had a bag full of brussel sprouts I wanted to cut, steam and caramelize. I knew that if I cooked them on the stove it would make the camper stink all night. Steve took out our little table top Coleman party grill. Not only is it a grill, but it also has a little rack for a burner so you can use it like a stove burner. I steamed and caramelized the brussels sprouts outside on the picnic table and kept the cooking odor out there. 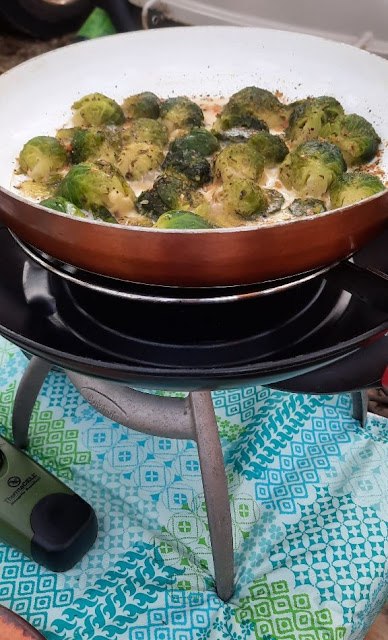 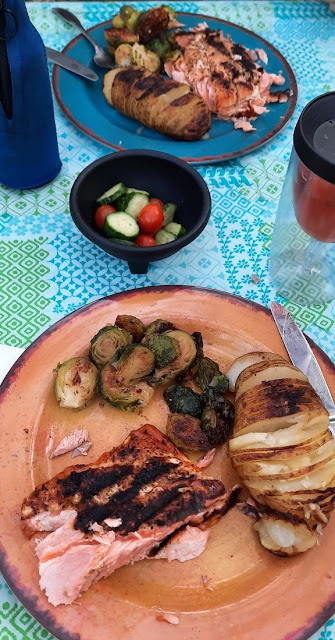 We took one more amble around the campground in the late evening before the sun went down. We knew Saturday was going to be cloudy and possibly rainy, so we wanted to enjoy the outdoors as much as we could.

Even though the campground is almost full, the two sites next to us are still empty. How nice is that? So we have a nice long distance between us and next camper.

It was a peaceful evening. 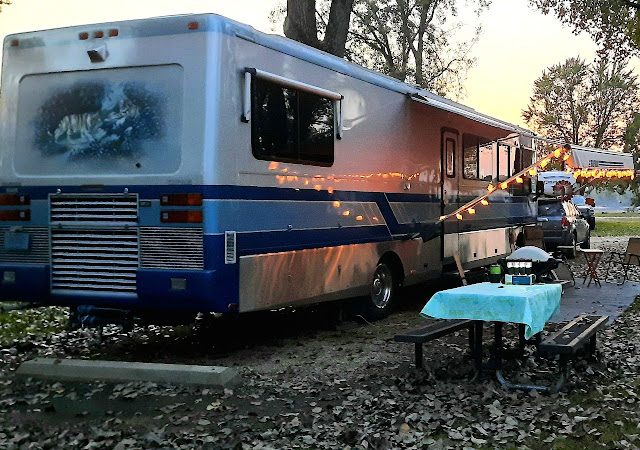 When you camp in a campground full of fisherman, they all go to bed early! Then they all get up very early and quietly go over to where their boats are waiting and head out fishing.

We slept in this morning until 8:30. Even though it's cloudy and hazy and not quite as hot out, it's not raining. Yet.

We are sitting out underneath the awning. Steve is perusing some of his motorhome repair manuals and literature, looking up stuff. Nothing's broke, but he just rereads things from time to time just to catch up on maintenance.

Binney is laying at our feet like the Dutiful Campground Doggy that she is. She has learned to not bark at other people, and to lay here, and just observe what's going on.

While I contentedly work on some of my knitting. Winter is coming, you know?

The rain is still holding off and now some blue sky is peeking out. I think we are going to go for a ride and check out some more things in this area around DeSoto Wisconsin.

We had to drive about 10 miles from the park in the Saturn,  to find a decent cellular signal to send this blog. We are parked on the side of the road in Ferryville, Wisconsin. I got two bars and an LTE signal. So that's how you are getting this blog today!

Posted by KarenInTheWoods at 4:36 PM