Even though the rest of the room isn't finished yet, I am thoroughly enjoying waking up each morning to this beautiful view!

We can now sit in bed with a cup of coffee and languish around a little bit longer, since we have this beautiful sunshine coming in.
But then it was time to get to work. Steve brought in the wood strips to start reinforcing and leveling out the ceiling to add new sheets of drywall.  At first he tossed them RIGHT ON MY HANDMADE QUILT!!!   ACK!!!!

I quickly grabbed a couple wool saddle blankets and took care of the situation.  It was not a good way to start the day, to say the least.

Steve pre-measured and pre-marked the walls and the ceiling to add these wooden strips. They will bring the ceiling surface down a a bit lower.  These are for the sheets of drywall to be screwed to, and cover over the rough areas of the old closet walls and old attic scuttle hole.
Each wooden strip has a thick bead of construction adhesive running the entire length of the strip before it is lifted up to the ceiling.  Then long screws are put through the pre-drilled holes at 16 inch intervals, right into the ceiling joists.

Steve starts on one end, while I stand on the other end holding the wooden strip into place. Instead of going up and down up and down a ladder, Steve made me this handy board with a y-shaped end made of two screws. I can hold it into place exactly on the center mark until he gets everything fastened at his end. 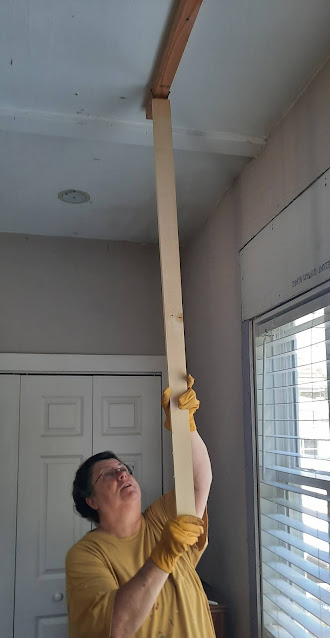 Even though we have 9-foot ceilings, Mr. Tall Man Steveio was able to stand on the bed to reach the middle sections of the room. When we get ready to hang the drywall, we will dismantle the bed and move everything out of the room.

One strip happens to be located in line with where the light fixture is. So, for that one we had to cut it into two pieces. We will remove the light fixture during the drywall phase, and just have a temporary light socket wired in.

Now we are adding extra strips on the other side of the old support boards from the old closets. They were both removed to make this bedroom bigger, and it pushed the wall over into the other bedroom. That smaller bedroom then was made into the master bathroom. This is the ugly stuff that we will be concealing underneath the new ceiling.

At the same time that we are going to hire a young man to plaster the ceiling, he will also replaster all of the walls in the bedroom. The old wall texture is from a blown on splatter gun texture sprayer that the previous owners had done. This surface will all be covered over with new skip troweling. It will be made to appear much neater and cleaner.

We hired the same young man that had done all the walls and ceiling in the She Shed last year. He is going to come as soon as we get all of the drywall screwed up into place.
We got all of the supplies ready for him, and we will dismantle the bed and remove everything from in the room. I have a roll of wide rosin paper to cover the hardwood floor.
As soon as we borrow the neighbor's drywall lift and a little help from our son-in-law, the sheets of 12 foot long drywall will be attached to the ceiling.

We are just getting too old to do all of that overhead work anymore... plastering and drywall... taping and sanding excetera.
I think this is one job that we will hire out again this year. He did such a great job for us in the She Shed, we are happy to get him again, on short notice.  Sometimes we have to know our limitations due to age, and eek out the money to pay someone else.
In between doing this other work, last night I found a local guy selling some shutters. They were just the right size that I needed for on each side of our bedroom window! He even dropped them off right at our front door, how nice is that? He only charged me $10 each and they are the exact size I needed. The only problem, they are BLUE! 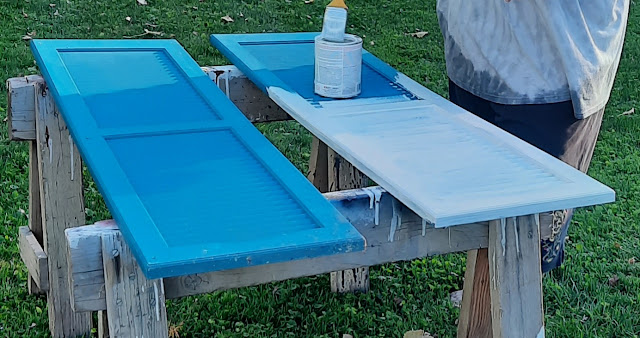 I got out my can of special primer for PVC vinyl or plastic. It's rather stinky. But this gets painted on first and it helps the paint to cling better.  When we bought the house, I gathered and painted the other shutters red too. By painting these to match, it will be nice to complete all the sides of the house, all of the way around.

First thing this morning, before we were working on the bedroom ceiling, I grabbed out my can of Double Decker Bus Red and started to paint the shutters. Do you see my supervisor making sure that I do a good job?

I wanted to get them done as early as possible, we were going to be up in the 80's and very high humidity. It's so pleasant to paint early in the morning but I had to wait until the dew was starting to dry off the grass.
At the same time, I decided to paint the little picnic table and four benches. They had originally been red when I first got them, down in Chilton. I bought them as a fundraiser from the Wisconsin Sheltie Rescue rummage sale. I had painted them blue to match that house.
Then when we moved up here, I had only painted the tops red before I ran out of paint. So for the last two years they had blue legs and red tops. It was time to make them all back to red again! 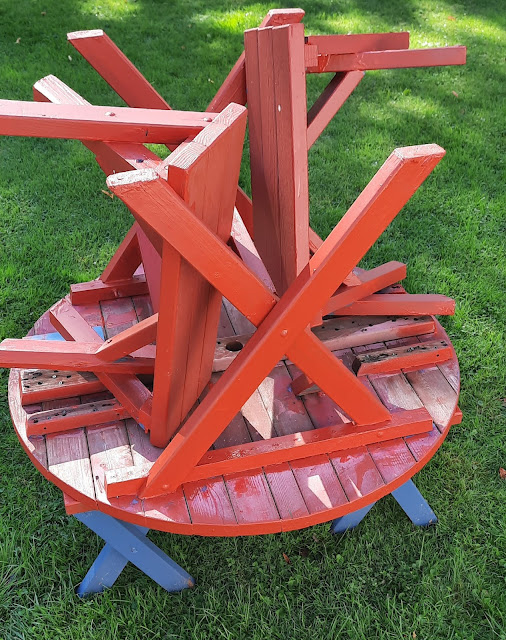 After we were done with the ceiling work,  I popped back outside to finish up a second coat. Tah Dahhhh! 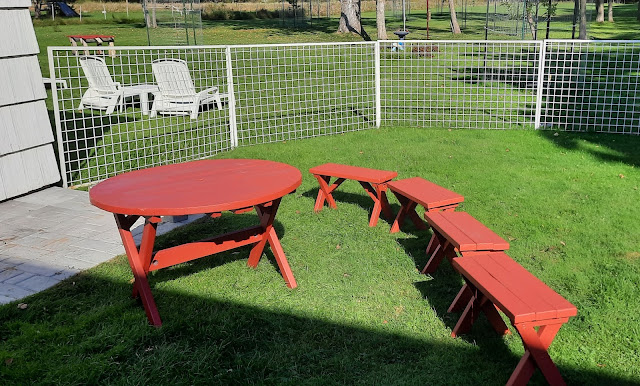 Imagine my shock when I later saw that Binney's nose was bleeding!!!

She was just being "nosey"

Posted by KarenInTheWoods at 8:10 PM