Siding Is Done - Back To The Bedroom!!

Remember in my last blog, I mentioned how sad Steve was waiting for the new trigger valve for his air siding nailing gun? Well, just look at that face!

That happy grin tells it all, doesn't it? The new piece came and he was able to install it into the gun correctly. And now it works again! Sure beats having to buy another gun. In the meantime, we had also called all over to see about renting one, and nobody rents them. So the self repair job was well worth the wait.
Bright and early, we hopped to it. I would hold one side and Steve would hold the other. We have a little spacer piece that helps to line them up. I double check it with the 4 ft level while he nails one end. Then as he moves down the slab of siding, we make sure that it's even as he goes along. The bottom board is the most critical.

We worked together up the side, one slab of siding at a time. It's slow going, but we know it's done right. So much better than vinyl siding! This is LP Smart Siding, and it should last a long long time. It looks like real wood. I think the warranty is like 50 years or something.

Steve worked along the narrow part between the window and the corner, and then finally up across the top part the last few boards. It sure felt good to finish this up and have it sealed in for the winter. I have the shutters painted that need to go up on each side of the bedroom window. I still have to locate some 74 inch tall ones for the bathroom window next to it. I'll be darned if I'm going to spend $50 for two pieces of plastic! From time to time they are in stock at the Habitat for Humanity ReStore for $5 each. I will keep checking back until I find some the right length and paint them to match.
Even though this is the back side of the house that nobody else sees, we know when we are in the yard we like to look back and have everything harmonious and matching. Even his goofy bulkhead he wanted that we installed over the entrance to the basement. It needs a fresh coat of red paint, and I will do that the same time that I do the last set of shutters, when I find them!

Now onto the inside!

Our plaster guy did a wonderful job, and we let things dry and cure. Now it was time to start painting. I bought ceiling paint with primer added, so all I needed to do was two coats of white on the ceiling. That went really fast. It sure looks nice to have a smooth wonderful ceiling without the old structure supports from the old closets or the old light fixtures or the old attic scuttle hole. Now we have a completely smooth ceiling!

You know, it's the little things that mean a lot. For two years now I have stared up at that crazy old ceiling and knew that sooner or later we would get it done. I guess it was later, but now it's done.
Now it was time to start on the walls! I happened to have a little helper here for the next couple days...  she put on her old paint clothes and got a new paint brush to be Grandma's Little Helper.

The first step was to mix up the paint. We had half a gallon of the white paint left over and we had half a gallon leftover of a creamy beige from what was originally on the walls and it was matching the rest of the rooms in house. By blending these two together, we would have enough to paint all of the walls. Plus it would be in the same color family but a lighter color tone than before. She helped to stir stir stir with the stick, just like making a cake.

Some people might think I'm nuts to let a four-year-old help me paint the bedroom. But hey, you got to start somewhere, right? It takes patience and it takes understanding and it takes a lot more time than it would if I was just painting the room myself. Sometimes it's the adventure that makes memories.

She did very well with the paintbrush and dabbed up the paint each time after dipping it into my tray. I had a roller to smooth things over as she completed each section.

Claire is a very clean and creative child, and very careful. You can just see it on her face as she is concentrating on what she is doing. Now if she were some messy crazy goofy kid, we wouldn't be attempting this. Plus with the floor completely covered and a bucket with wet rags nearby, we figured we were in pretty good shape.

After we completed that wall, we moved on to the next. I would like to say that she helped me paint the entire room, but really, she lost interest on the second wall. That was okay, Grandpa was ready on standby to take over and keep her occupied. That way I was able to finish the rest of the room myself.

She did pop back in after the second coat was done so she could pose for one more picture with Grandma. It was late, it was bedtime, and I needed a bath.

The next morning, after we toddled on in from sleeping in the motorhome, we went to work on painting the trim.  This time she got to use a little roller all by herself. She thought that was pretty amazing and she liked how it covered a lot more space with paint then using a brush.

We got most of the baseboard and trim touched up and taken care of. One more large piece of baseboard is still out in the garage. Steve has to remove the old massive original nails from it and patch up the nail holes. That will be installed on the last length of wall. He is also working on the window trim for around the new window.  Those things can take a little time. But for now the main part of the walls are all painted and we can remove the protection from the hardwood floors. It sure came out nice, if I do say so myself. The walls are a lighter sandy beige kinda gray than what they were before.

After supper, it was time to move furniture into our bedroom. Steve mounted my beautiful leaded glass light fixture onto the ceiling. I bought that fixture, believe it or not, at Goodwill many years ago. Actually, I bought two of them, one for each bedroom. I added the lamp shades which were from Menards sold as replacement shades. We took them down and replaced them with other fixtures in Chilton before listing the house, and packed them carefully in boxes to take here to Oconto. They match all of the other light fixtures and lamps in this house. So I was darned if I was going to leave them behind.

Claire was spinning in circles in the free open space on the hardwood floors. She didn't want us to really move anything into the room, because she said it would make a great play space for grandkids. I suppose so. But we did need to have a place to sleep so she decided to help us move in the bed.

Little Miss helper girl has to be right in on everything. Here she is helping Grandpa carry the under bed drawer sections for our king size bed. They are pretty light, just awkward.

Next she had to help lay all the slats into each little slot. She had to count every board and make sure they were lined up and not criss cross she said.

She carried in the doggie bed and laid it down on my side of the bed on the floor. Binney sure was glad to have her bedroom turning back to normal. She does not like change. At all!

Soon this silly little girl was doing her best to be a monkey jumping on the bed. I had to kick her off before she fell off and bumped her head. We were tired and exhausted and the last thing we wanted to do was take her to the doctor.  Because you know what the doctor said? No more monkeys jumping on the bed!

As I laid down that night, to go to sleep, I gazed out my new window at the beautiful moonlit sky. I looked up at the beautiful ceiling that we worked so hard to hang the straps and sheetrock. Although we paid the guy to the plastering, we still put a lot of effort into the room. It's nice to have it finished. And we now have a normal ceiling.

I asked Steve to turn the light fixture on, just one last time, so I could take this picture from laying on the bed. Yes, our view has definitely improved. 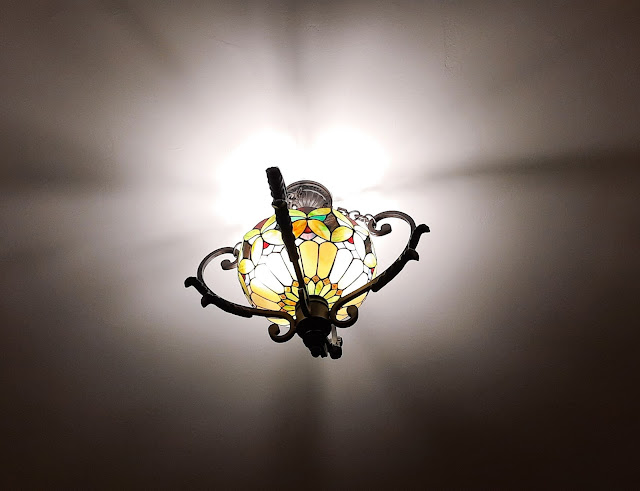 It is crisp and cool again here in Wisconsin tonight. We lit the gas fireplace for the first time down in the she shed for the season. It sure felt good. 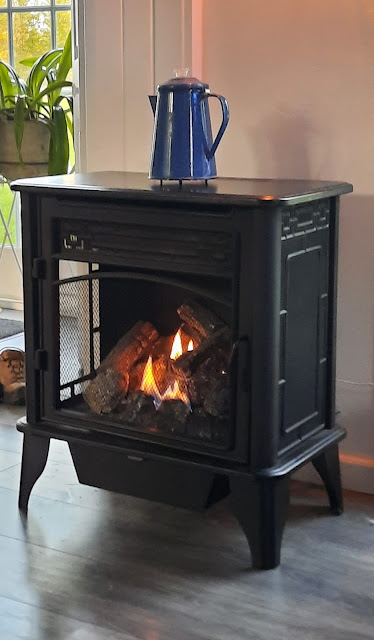 We are going to get down in the mid-forties tonight and I am glad we are snug as bugs in the rugs in our newly redone bedroom.

Posted by KarenInTheWoods at 9:08 PM