Getting Plastered and Canning Tomatoes While Missing Mom

The Packer game last night sure was good. We watched until half time while we were still in the house. We could see the rain start pouring down at Lambeau Field in Green Bay on the screen. It's only about 30 miles south of us. We figured this would be a good time to gather up our sleeping gear and head on out to the motorhome in the driveway.

Because of our bedroom being dismantled, we slept in the motorhome. I preferred getting out there in our jammies while things were still dry and not with the impending storms that were forecast. So we packed up the dog, some morning coffee makings and a couple donuts, and headed on out to the motorhome. We finished watching the game out there, in comfort, while the rain beat down on the motorhome roof. Packers won 35 - 17 over the Detroit Lions.

We woke up in the motorhome to sunshine, but chilly temperatures. Much better than the muggy humid stuff we had yesterday. We snuggled in with our coffee in the morning and watched a little TV before it was time to get up and start the day.
We wanted to get in the house and unroll some more of the rosin paper to make a protective walkway back and forth to the front door. That way when Paul, the plaster guy, came he could carry his buckets in and out and not worry about the hardwood floors. He has the outside water faucets, both hot and cold, to stand outside and mix up the buckets of plaster with his power mixing drill.

The original hardwood floors are so nice, we don't ever wear shoes in the house. But we sure don't expect a hired contractor to take off his shoes each time! Lol

Paul started on his project this morning and got the seams all taped up and first coat on every seam. It's important to get the first coat on and let it dry because the compound shrinks a little bit. Then before you put on the second coat, you are sure the first coat has done all of its shrinking. Otherwise you'll get cracks! Then he started filling in the rough textured walls with the new plaster. It's going to look amazing!

This is one of those wide angle shots that distorts the room, but you get the general idea. We are quite pleased that everything is filling in and it's going to be a nice ceiling surface as well as new walls ... without the splattered blown on textured surface that they were before.  Look at all of that beautilful sunshine streaming in.  Ahhhhhhhh

He said he should be completed sometime tomorrow.
~~~~~~~~~~
Silly me, remember when I was so excited my very first grape tomatoes this year? It was such a delight to go out and pick one at a time as soon as it turned red and pop it into my mouth. They started out slowly, one by one.  The grandkids would go out and look all around for even ONE little tomato, to nab it from the vine and bring it in like a treasure.
Soon we were getting a handful at a time--- enough to cut up and put into a salad or even chop up and put into tacos.
Now I get tons and tons of them and they're driving me nuts LOL. Soon the season will be over. So it's time to can them up. I chopped them up into little pieces and mix them in with the large tomatoes to process in my canning jars.

Yesterday I picked a whole bunch of ripe larger tomatoes. These are Better Boys and Early Girls. My tomato patch of 8 plants is getting almost to the end of growing season.  This batch is about 6 quart jars worth. I was going to can them up last night during the Packer game. But the game was so darned interesting, that I ignored the tomatoes. So this morning I washed them up and got them ready to process.

I chopped all of the little ones in my food chopper with the skins on. Then with the large tomatoes I cut out the stems and I slice an X into the bottom of each tomato. Roger, if you are reading this blog, that is your beautiful tray right there... I used it to carry the tomatoes over from the island to the counter. I love that tray!

Then I simmer the large tomatoes in a pot of water, just enough to loosen up their skins. By having the X sliced on the bottom it makes it much easier to peel the loose skin off the tomato. 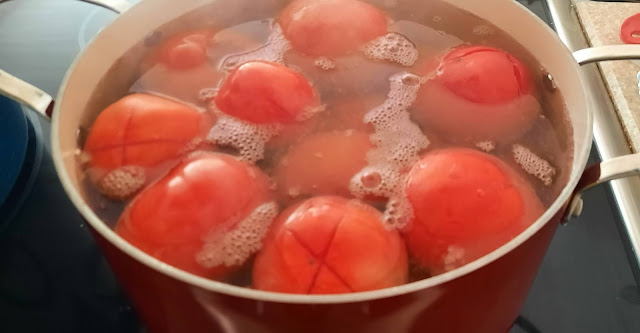 I plunged the simmered tomatoes into a big tub of ice water. That helps loosen the skins up even more. I ladle them out with a large slotted spoon & peel the skins away to discard. In the bottom of the jars I have a tablespoon of lemon juice, a tablespoon of pickling salt, and a couple scoops of the chopped up little grape tomatoes.

As I peel the skin off each tomato I grab my little knife and cut it right on the large slotted spoon into sections or chunks. This is much easier than trying to hold it in your hand because the tomato is still very hot.

Instead of using my big canning kettle that holds nine jars and heating it on the outside propane burner, I am just doing six quarts in the house. I do not like putting the big canning kettle on my glass top stove, I have heard it may crack it. Instead I use my tall blue enamel soup pot, and I put in three jars at a time. Because there isn't a rack for the jars, I wrap each one in a burgundy cloth dinner napkin and I put one on the bottom of the kettle as well. That way the jars are not sitting on the hot metal. That can crack a jar. In the smaller red kettle on the right I keep the next three jars warm on a low setting just so they don't cool off too much after filling them. Once the first three jars have been in the hot water bath for 45 minutes, slowly simmering, then the next three jars will take their place.

As I type this, I have three jars finished and sitting out on the towel, and the last three jars are in the hot water bath right now. Soon I will hear the PING PING PING of their lids as they seal up tight.

I line them up on my little pantry shelves. Row by row, jar by jar, my shelves are filling up for the long winter. Nothing can be better than popping open a jar in the middle of winter to make a pot of chili or a casserole. The smell of summer comes wafting up. I reach in with a fork and take out the first chunk of tomato and eat it straight from the jar. That is my reward for these hot days of summer, processing these tomatoes.

I wistfully recall my childhood years, of canning vegetables with my mother. Year after year. I would stand by her side in that hot steamy kitchen and we would process up all of our garden produce. We did hundreds of jars of everything. Not just tomatoes! We did all kinds of canned vegetables and sauerkraut and jams and jellies. One of my fondest memories is after putting the last few jars on the shelf of what Mom called her "Veg-All Mix" which was a mix of all different leftover vegetables at the end of the season. As we placed the last few jars on the big wide deep basement shelves, she stood back with such a look of satisfaction on her face. She put her hands on her hips and smiled after wipinig her brow. She said "My oh my, are we ever rich!"
That made such an impression on me, because we weren't rich at all financially. Life was not easy with a large family and a big garden and not a lot of money. But knowing she had hundreds and hundreds of jars stashed away for the upcoming winter, it gave her the sense of being rich.

Sometimes, it's the little things.

I miss my Mom.

Posted by KarenInTheWoods at 1:28 PM