I started this blog post in July, and never got around to posting it. Remember the wonderful huge beautiful antique barn loom that I got from a museum in the Upper Peninsula of Michigan? I found out more details about the original owner from a telephone conversation with her grandson.

What follows are from the notes from a phone conversation with the grandson Ron Kangas, July 2, 2021 He and his wife Arlene followed up with mailing me some photographs and more history about his grandmother, the original owner of this beloved Finlander Barn Loom...  now dubbed the "Sanna Kangas Barn Loom". 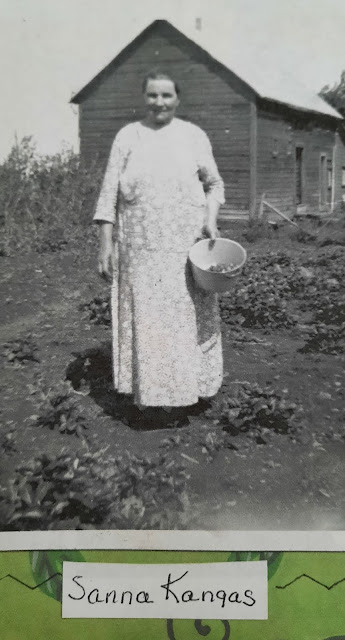 She came from Finland in 1908 with her husband Matt, (I also found references to a Maddy or Mathias?) and they emigrated here with two children to Ironwood, Michigan. (located in the far western area of the Upper Peninsula).

Once settled in, she had 3 more children while making their home in Ironwood.

She had the arched root design barn loom built for her in 1910 by a Finnish craftsman woodworker in the area, and it was built to her specifications.  It cost her $20 which was a large amount of money back in 1910!

The loom was kept out in the wood barn as it was too large for the house. It appears in the background in the photos up above. When she wasn't weaving on it herself, she would rent the use of it to other people, who would come into her wood barn to weave their own rugs, and pay her for the warp they used.

Grandson Ron remembers sitting with his little butt on the bench next to her as she wove the rugs. He would help with cutting rags and winding shuttles. He remembers that it was a pleasant cherished time to be able to spend with his grandmother out in the wood barn, weaving on the loom.

She never learned English and spoke her native Finnish, as did most in her community. She had a Finnish newspaper delivered once a week and that was her connection with the Olde Country.

She was a Deaconess for many years for the Zion National Lutheran Church.

She was known in the community to sit on her porch in her rocking chair, singing Finnish Bible songs. She would knit thick wool hunting socks for the men and watch for friends and neighbors to come and pick her up to drive her places. She never drove herself and didn't own a car.

The house had no running hot water, just a cold water tap into the house. There was no refrigerator, instead they used a cool root cellar to store their food. In the winter they would use a pail on the porch to keep food cold. They had a large garden and she canned vegetables. Her favorite thing to do was pick blueberries. They would travel to Wisconsin and pick buckets and buckets of blueberries. Then she would preserve them in jars, and open them as a special treat in the winter. She would pride herself to open up a jar and ladle them out into bowls on the kitchen table for everyone to enjoy. It was her special dessert.

Her husband passed away in 1937. He was a miner in the local iron mines. After his passing, she always wore black.

Grandson Ron remembers going to live there during the Depression. He and his father helped to build the sauna of cedar logs and working hard hauling gravel in wheel barrels for the concrete mixer. As he grew into a young man, his father decided that they needed to have a different life than becoming miners like Sanna's husband. So the grandson Ron and his family moved far away to the big city of Detroit.

Grandson Ron remembers going up to visit, and enjoying his time with his grandmother and her home, which he missed dearly.

She lived in the same house all of those years  and remained alone in the house until she passed away in 1952.

The loom was packed up and moved down to the son Rick and daughter-in-law Felona's home in Detroit. Felona wove it for a number of years. Here is a photo of Felona, and I wonder if she learned to weave from Sanna, or if there were also weavers in her own family? 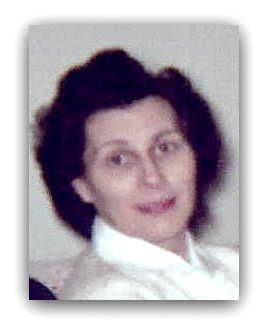 After Rick and Felona passed away, Ron needed to clear out his parents house and was looking for a museum in the Upper Peninsula that would take the loom. He was willing to deliver it there if any museum was willing to take it. He said he wrote letters to all of them across the U.P. and the only one that would take it was the Menominee Range Historical Foundation Museum in Iron Mountain, Michigan. This town was located 130 miles from Ironwood, the town where Sanna had lived and where the loom had been constructed. But at least it was a museum that was willing to take it. This was back in 1992.

Ron tried one time to visit the loom at the Museum. The museum is located in three different buildings in the Iron Mountain area. He purchased the admission tickets to all three buildings but only two were open that day. Sadly, there was nobody available to open the third building where the loom was located. So he never did get to see it on display.  This is how it looked on display at the museum: 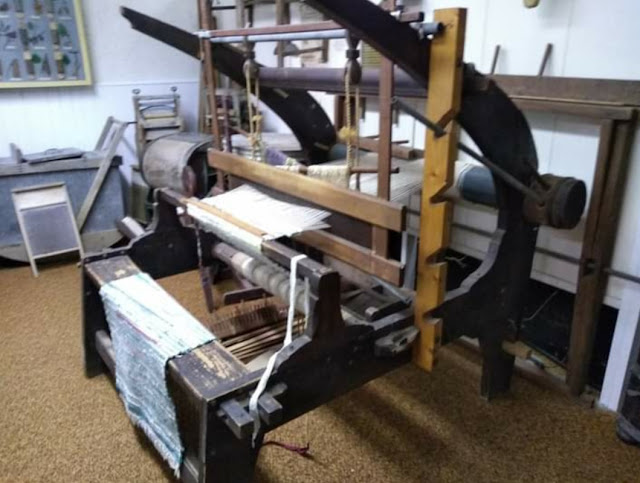 That was the last he ever heard of the loom.

Until I contacted him.

Now he is hoping to stop by and see the loom in person on one of his visits from Lower Michigan, looping around through Wisconsin and up to visit relatives in the Upper Peninsula. I told him he was more than welcome to come and see the loom and sit his little butt on the bench... just like he did when he was a grandchild, alongside Sanna as she wove her rugs.

The loom remained on display until 2021, when the museum had to condense its displays and move them to another location. They did not have the volunteer manpower to dismantle it, move it, and erect it correctly, much less the new space for it to be moved onto. They started advertising it on Facebook Marketplace. My weaving friends Rosie Dupuy in Missouri and Linda Baldwin in Tennessee spotted it and sent it immediately to me. They insisted I could not pass this up, and I needed to go get it NOW. It was only 75 miles from me.

That is when I came into possession of the loom, for the price of a donation to the museum.

Here is my blog post about getting the loom:

After bringing it back home to Oconto, I wove off the half finished rug, and sent it as a gift to the grandson, Ron and his wife Arlene of Detroit, Mi.

I had to rearrange the She Shed to get it to fit, but it was worth it to get the loom into a clean dry environment and useable again.  I did have to reluctantly sell off another loom for more space.  But as they come and go, I make sure the looms go to good homes where they will also be loved and used.

I cleaned up the wood, and removed the notched bar on the side that had been added on sometime during it's lifetime. Perhaps when Felona had it? I changed all of the old sisal barn rope with new fresh cotton window sash cord. I cleaned up the original reed and beater, and replaced the apron. I replaced the pipes with wooden dowels. I also added, with the help of my husband, sectional rakes to the back beam and notched brackets on the top of the castle to give more adjustable positions for the overhead beater. We also added a heavy steel handle to the front of the beater, made by Jim Burkett of Beloit, Wisconsin. 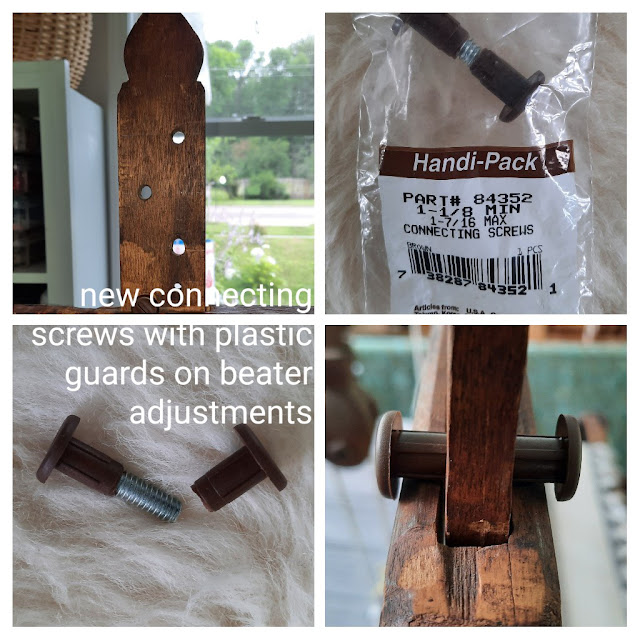 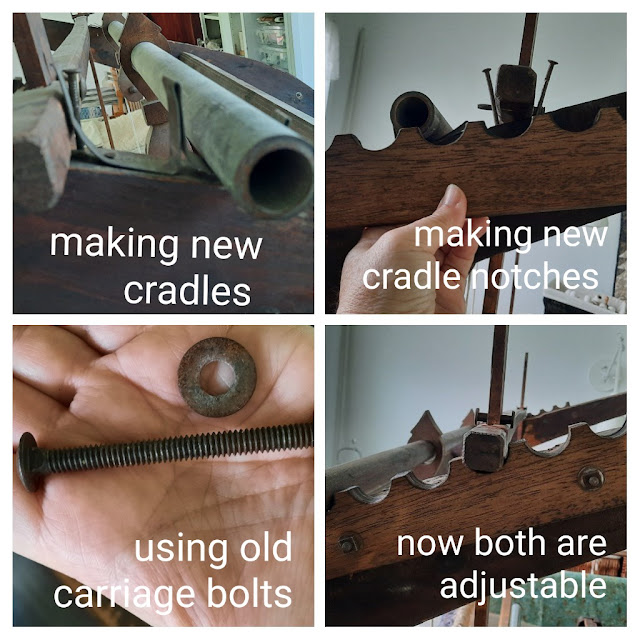 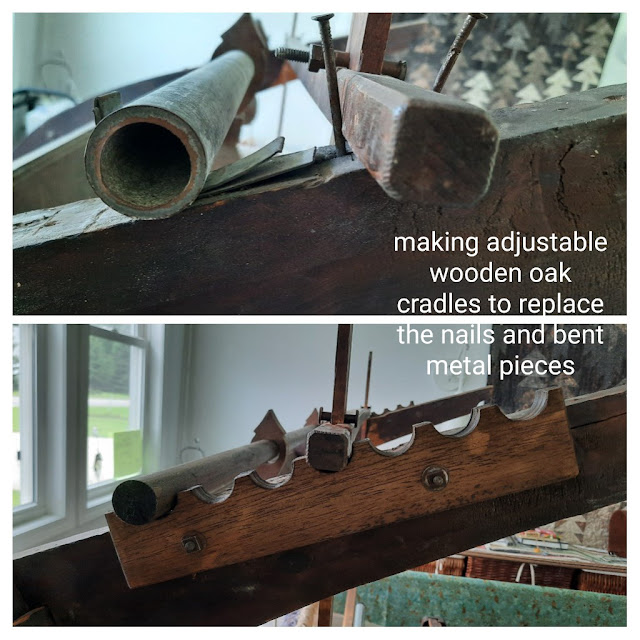 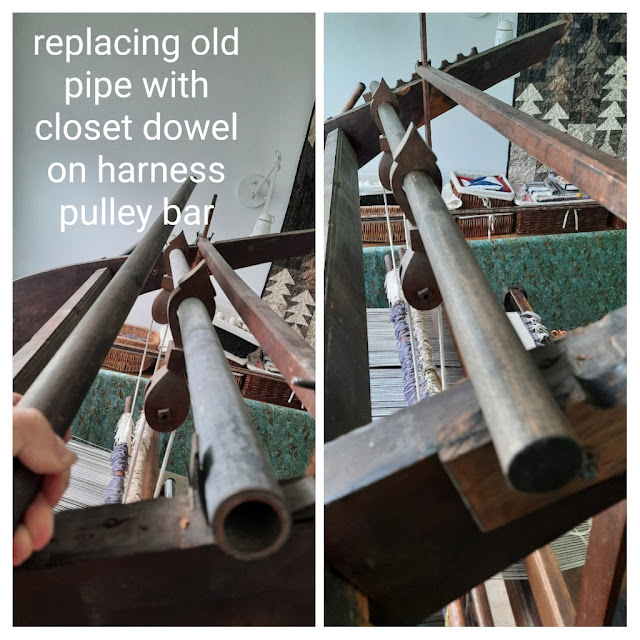 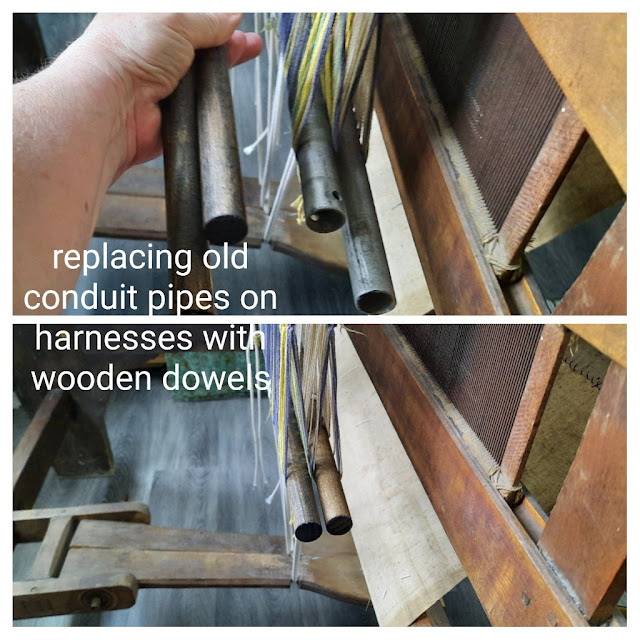 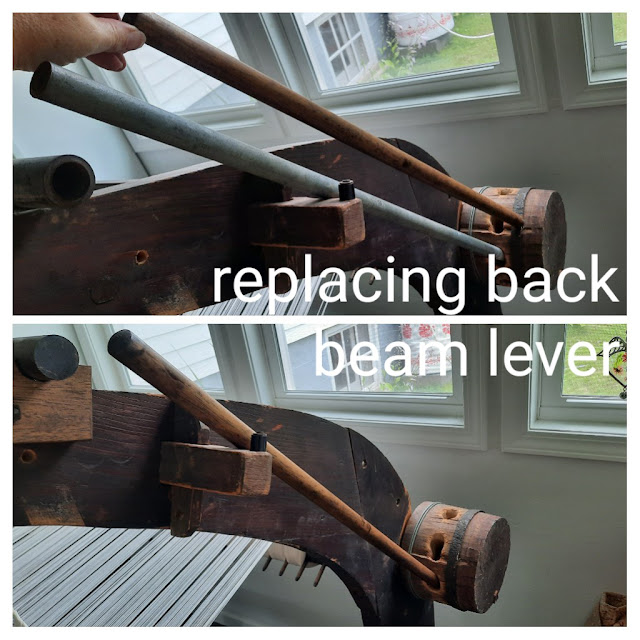 Then I wound on 45 yards of new warp to start weaving.

The rest of the loom is in its original shape. It weaves well and true and square. It has a happy home, being used to weave rugs again.  The grandkids love to come over and help beat the rugs.  The harder the better, and it creates a firmer rug. 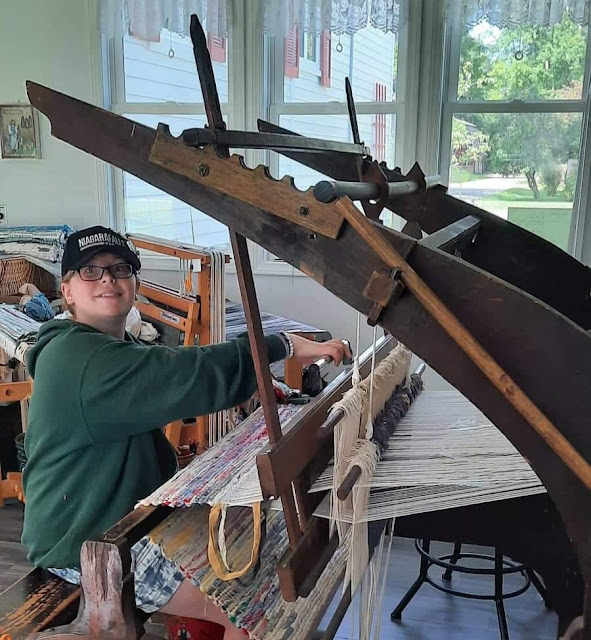 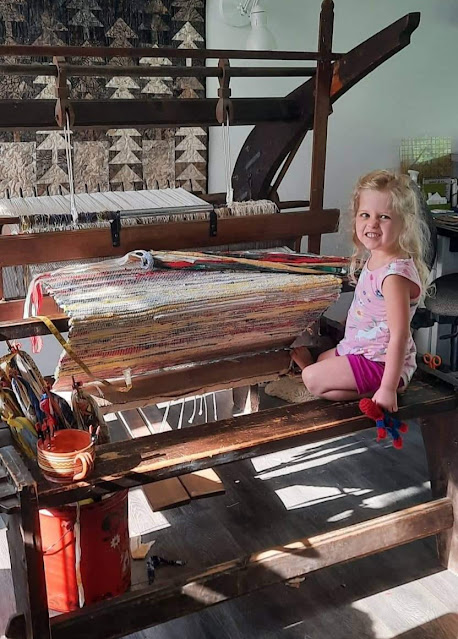 right alongside of me.

Just like grandson Ron's butt fit next to Sanna.

I'm sure Sanna Marie Salimaki Kangas would be pleased.

~~~~~~~~
On the bedroom window installation topic, we are waiting for a part for the siding nail gun to arrive in the mail.  Once he gets that, we can close up the rest of the wall on the outside, sealing it in for the upcoming winter.
Posted by KarenInTheWoods at 1:43 PM