VACATION - Looping Around Lake Superior - Day 12 - BACK IN THE USA

Waking up at Pancake Bay, we knew it was gonna be a "HOT ONE" for the upcoming weather.  We found a Canadian analog news station (very fuzzy old reception) with local reports for the Sault Ste Marie area.  We had to make a decision if we wanted to stay there another day with electrical hookups for the air conditioning, or head out south and cross the border. 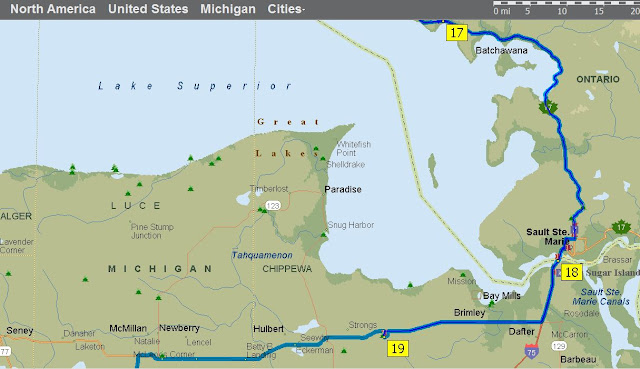 Starting out the day 12, when walking in the park, we noticed these great old telephone booths, still in use (cell signals are few and far between)   We were told that is why Superman never saves anyone anymore in the United States.... because we don't have  telephone booths left for him to change his clothes in! 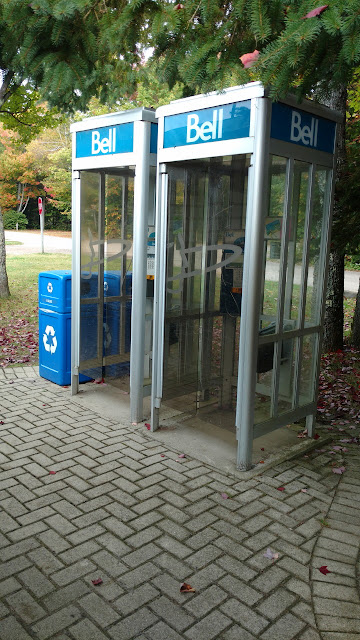 After our breakfast, I took a ride over to the tourist trap down the road to post my blog and check the weather into the UP of Michigan.  Hmmmmm  some evening thunderstorms were gonna come through the area we were camping in, but south of us it looked pretty good for the afternoon.  Just hot and muggy and humid. ick!

We decided to try to head out about 2 pm and hit the border around 3ish after dumping our tanks and  taking on fresh water before leaving the park. Here was our plan for the day:  leave at 17 and go to 19.

So before lunch, we took a ride around the area in the Tracker. We drove over to Batchawana Bay and checked out the day use picnic grounds there.  It was nice to see the wide shallow bay, but with the fog it was still hard to decipher the far out waters of Lake Superior on the horizon.


On the back to the campground, we stopped again at the tourist trap called Agawa Indian Gifts.  We looked around and saw nothing we needed. We had hoped to find something cute for the grandkids, but nothing really appealed to us.  It's a shame, but most of the so called "Indian Items" for sale were made in India, China, Mexico and the like. 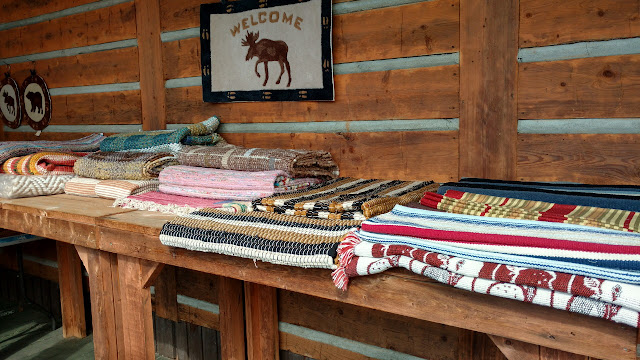 Even a table full of woven rag rugs like I make myself, were tagged as if they were from Canada with big letters of Missassauga, like the Native Indian tribe---- but in smaller print was "made in India" .. the same with the blankets and other assorted crafty items.  Sigh.   I guess India and Indian mean the same in Canada? 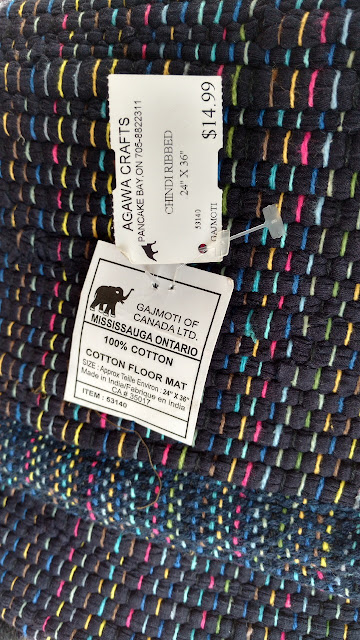 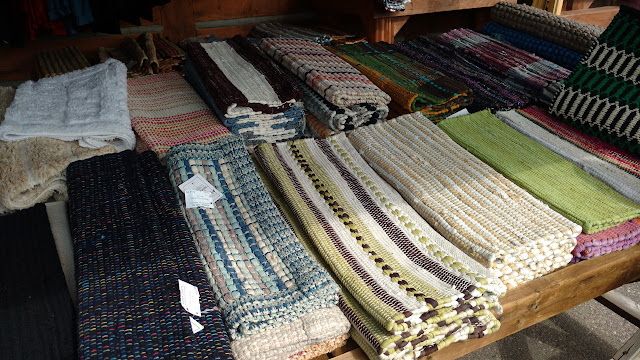 But we were very fortunate to finally find a MOOSE! 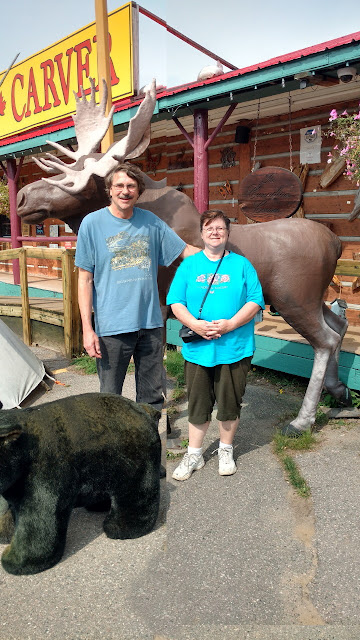 
We started to pack up the motorhome and had it ready in half an hour. Suddenly over the high mountain range, in came a storm, blustering and blowing around as we were at the dump station, taking on fresh water and dumping our holding tanks.

I was thrilled to see this great old Winnebago pull up!  It's a 1974 Winnebago Brave.  I had a 1972 Winnebago Chieftain that I adored.  I chatted with the owner while Steve as doing the dump thing.  He said he bought it on a whim, as a topic around the campfire one night. It had been stored in a barn for the last 13 years.  He got it out and got it running. Being a carpenter by trade, he gutted it and retrofitted the inside with all new amenities. 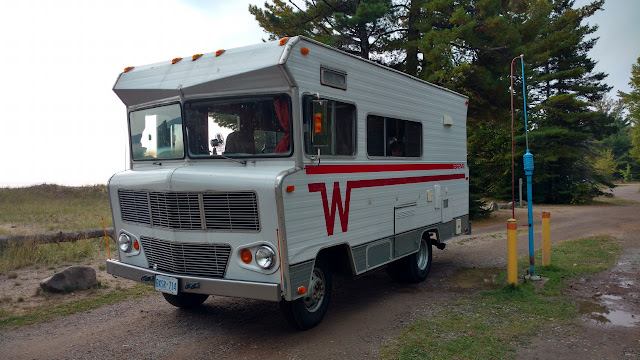 He said his son in embarrassed to ride around in such an old rig... when everyone has a nice new shiny one.  But the son is finally "catching on" that it is something unique and different and gets attention.  He wants to know what it will be worth in 20 years when he grows up and inherits it! 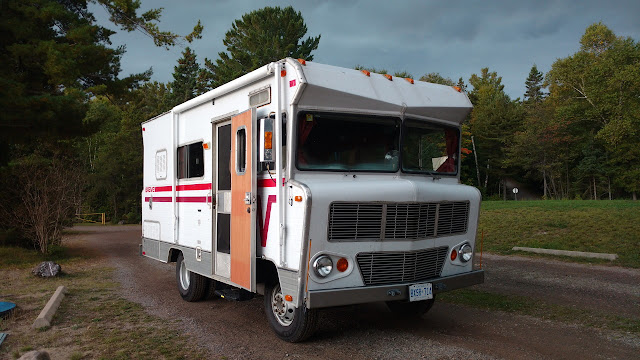 Our other entertainment at the dump station was a young man with a Cruise America Rental RV.  He had on his gloves and was hollering at his wife (who was safely hiding INSIDE the RV)  and she was tossing big stretches of paper towel out the door at him, as he was trying to wipe himself off.  I didn't take pics and didn't want to. We didn't hang around to watch the conclusion as we were rushing to get out of the park and south as the storm was coming down from the north. 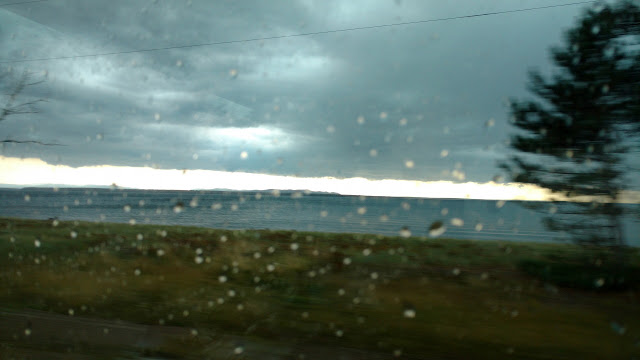 The temps dropped fast as the storm blew in...  down to 71 degrees as we neared Sault Ste Marie, Ontario.   It would blast from time to time, and we had to fight some swirling winds. But each time we could pull ahead of it and get to dry pavement. 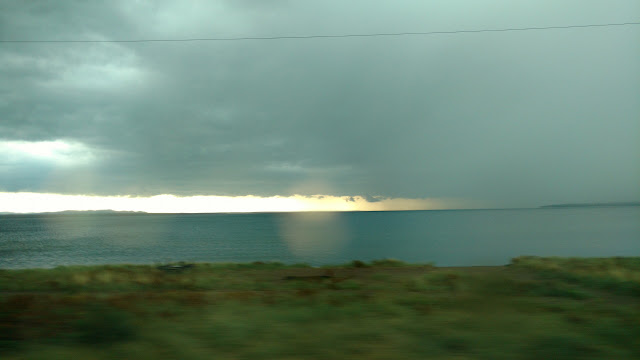 This is the location of the Wreck of the Edmund Fitzgerald ...
it happened right out here between Batchawana and Agawa Bay.

ya know the part about:

The legend lives on from the Chippewa on downOf the big lake they called 'gitche gumee'The lake, it is said, never gives up her deadWhen the skies of November turn gloomy 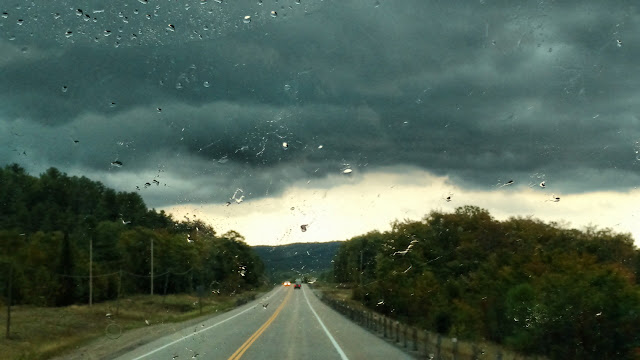 We were driving in the rain, and we would have made it all the way there ahead of the fast moving storm if we hadn't run into some road construction.  We had long waits with a long line of vehicles.  Once we got closer, we could see it was to rebuild the rocks and to haul away some that had fallen earlier that day. 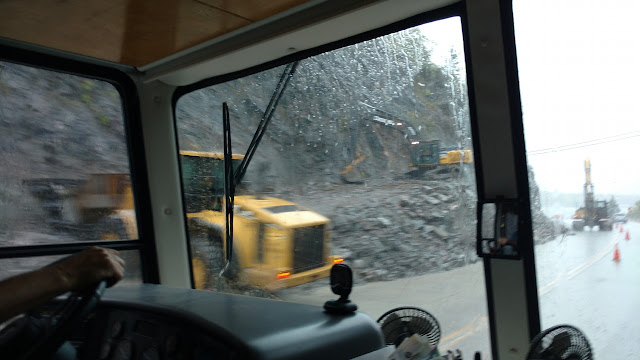 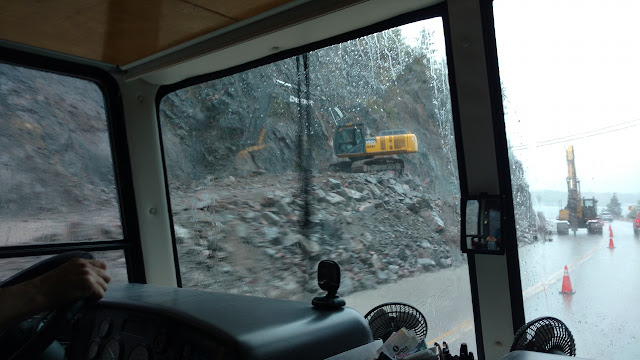 So now we knew why we had a back log on the only highway around Lake Superior. 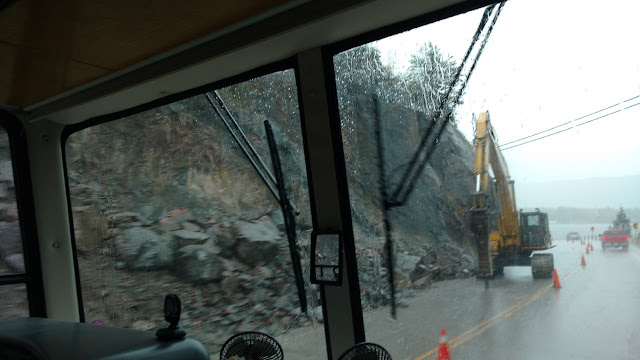 As we got close to the border, we decided to use up the rest of our Canadian cash at the Flying J to top off our fuel tank.  I know diesel is more expensive in Canada, but we wanted to get rid of the cash and it was too late to stop at a bank for exchange.  Soooooo we put $124 canadian cash into the tank and got back on the road through Sault Ste Marie Ontario.

We went along the truck route through town and then up over this big bridge.  In the middle is the border marked with flags from both countries.  They were working on repairs on the bridge too, so we had some delay there as well. 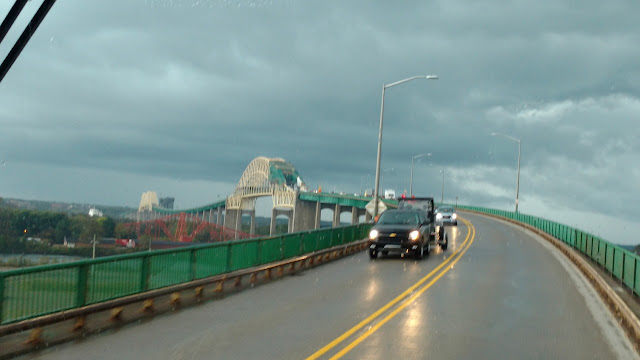 We crossed over the flag portion of the bridge at 5 pm eastern time... 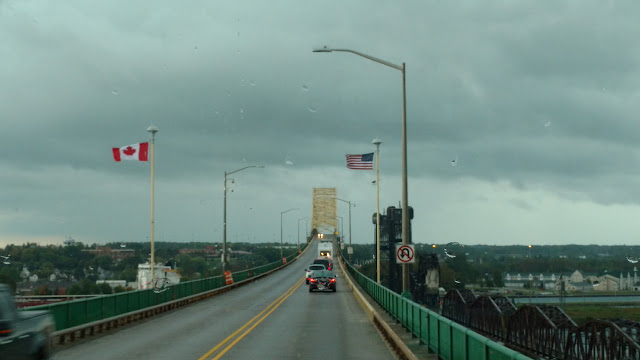 I shot a video clip of the bridge and locks....
but NOT of the customs buildings.

I learned that lesson back in Mexico that you
NEVER video tape customs officers!

At least this border was clearly marked what vehicles needed to use what lanes to enter the US. (not like entering Canada over on the Minnesota border 2 weeks ago)   we waited in a line as a couple semi trucks and cars mixed together.  There were lanes for cars only, pickup trucks, busses and all vehicles mixed.


The guy in the booth was having computer problems.  We handed over our passports as he was trying to troubleshoot on the phone with some tech person.  He asked us "where are you from" and "what is your license plate number"  that was it. Handed back the passports and we were good to go.

We pulled ahead to another row of toll booths to pay a toll to get back in the USA.  $12 and we were HOME!

We drove on south through Sault Ste Marie Michigan (yes, the city is the same name on both sides of the border)   and headed east on MI 28. This is all old familiar territory now for us, having my growing up all of my teenage years in the Upper Peninsula of Michigan. Yes, that makes me a YOOPER!

We drove into the Hiawatha National Forest and decided to stop at Soldier Lake. We had been here before, and it was getting to be a long day.  We found a great site, and backed right in. Comfortable and cozy, we made up some spaghetti supper and sprawled out on the lazyboy in front of the tv.  We could now pull in US stations and watch the local news for weather and happenings. It was an early beddy by time for both of us.

Labels: back into Michigan Again, coming into the USA, going throught US customs at Sault Ste Marie, Looping Around Lake Superior