THIS BLOG BROUGHT TO YOU BY FREE WIFI
IN THE TINY TOWN OF ROSSPORT
WHO KNOWS WHO OWNS THE SIGNAL??

Just east of Thunder Bay, Ontario is a low hanging hunk of land jutting down into Lake Superior called the Sibley Peninsula. We had traveled down this way 20 years ago after leaving our 33ft travel trailer up on the main highway.... we didn't know how bad the roads would be so we only traveled in our truck to explore to the south.  This time we knew we could drive on down to at least the Sleeping
Giant Provincial Park safely in our motorhome without leaving the pavement. (30,000+ pounds can be a bit daunting on gravel roads, especially after four days of rain! 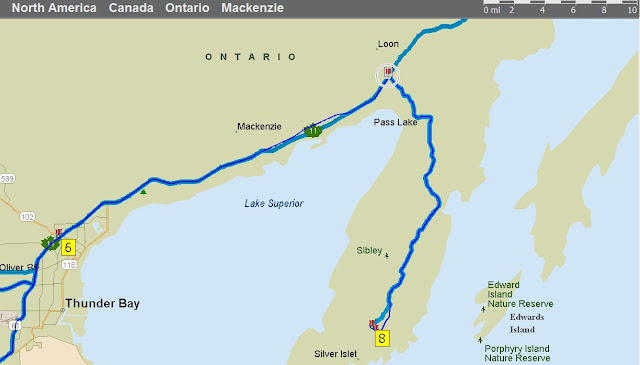 We meandered our way south on the only road going down, and a few times we had to pull aside if someone was behind us.  It's a narrow twisting road without any straightaways to pass. Being good RV'ers, we like to let the zoom zoom folks get by us as soon as possible.

It was just starting to drizzle some more as we entered the park.  We decided to opt for an electric site as it was only $4 more than a non-electric.  Then we can run the electric heater and our electric mattress pads and save on propane a bit.  With so many icky rainy days in a row, we are not getting the solar charging we normally do.  Short drive times are not enough to charge up all four batteries either. Yesterday we only went 70 miles and the day before only 23.

The rangers let us drive down into the campgrounds to look around and select a site.  Most of the nice ones along the water were taken, but many within the campground area were on muddy red iron puddled roads.  We opted for a site in a loop very close to the blacktop, site 85 on higher ground.  As we rounded the corner to our site, what did we see???? 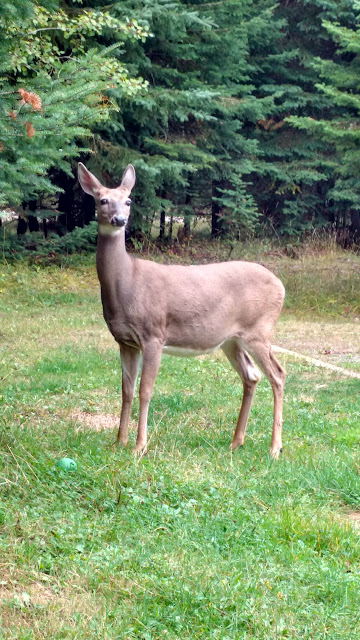 Yup!  She was standing right there in our campsite and stood still enough to take pics!  I was surprised that she wasn't too afraid.  Turns out they have gotten so used to humans all summer long, that we really don't faze them.  The dogs were somewhat interested at first, thinking they were "big doggies" but soon ignored them as well. 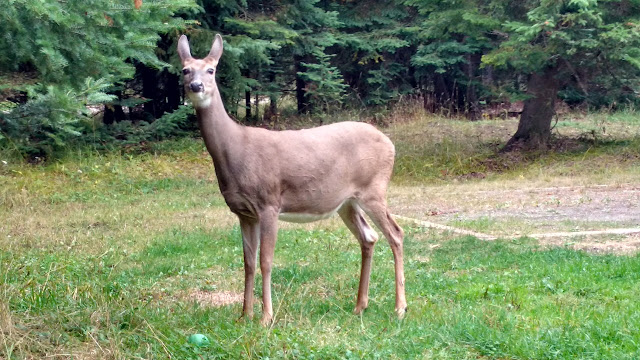 Here is a You Tube I made of just how interested they are!


We set up on our site just as the rain started to fall heavier. Time to curl up and rest and take it easy. (in other words, a nap) .  The sun poked out a bit at supper time, enough to take out the grill and make some burgers.  We took a walk around the park with the dogs, sticking to as many blacktopped roads as we could. 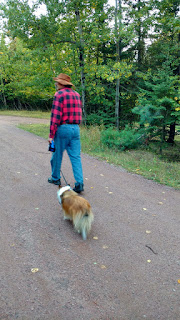 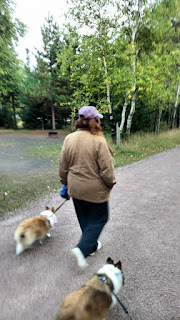 Any trails were soggy with iron red dirt and that does not combine too well with white doggie feet or nice white tennis shoes while on a walk. 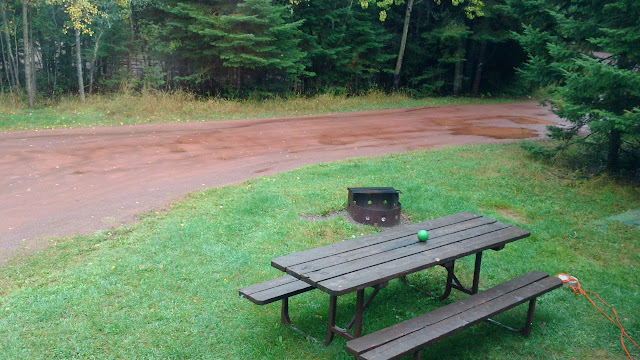 We had considered taking some trails, but the rangers warned us of impending storms rolling in and we didn't want to get stuck out in the woods somewhere during a deluge. 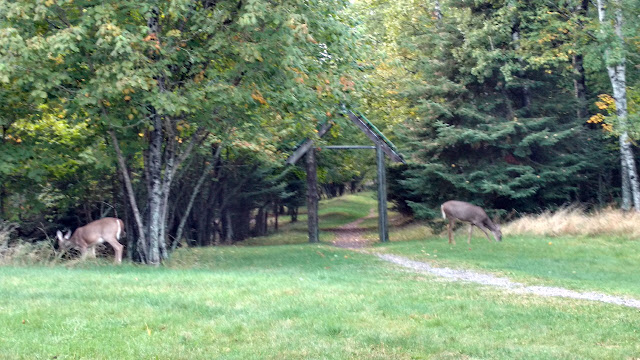 Sure enough, the storms rolled in with tons of thunder and lightening. The downpours were deafening at times on the roof.  I decided to bake cookies and warm up the rig with good smells while we watched another season on Northern Exposure on the dvd player.  My cookies came out kinda flat... and I realized my baking soda was expired by 2 years!  I need to add that to the store list in the next small town we come to. 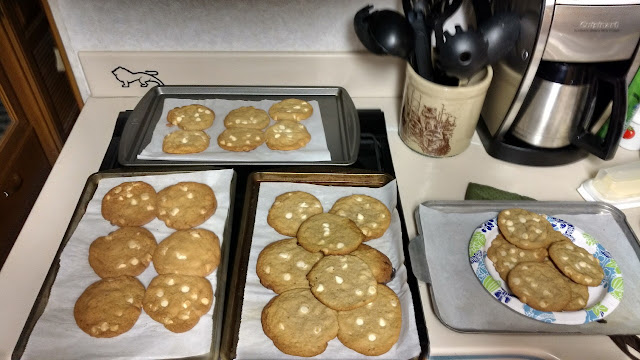 Posted by KarenInTheWoods at 2:38 PM