Thursday morning, after I finished my blog posting, we headed out north on the road from Two Harbors MN. I felt decadent hanging out till 9:30 a.m. in my jammies, but I wanted to post the blog while I still had a data signal.

Once we get into Canada, I can enact my Verizon cell phone with a special code and it engages the TravelPass option.  I can use my USA plan and minutes and data for a 24 hour period for a $5.00 fee. I only want to use it for a few times while in Canada, so I might be posting a few pre-prepared blogs at one shot.  Otherwise I will be racking up $5.00 charges every day for 2 weeks. Unless I find some free Canadian WIFI on the way.... a bit difficult as once we get past Thunder Bay, even finding those will be hard until we reach wayyy to the other side of Lake Superior at Sault Ste Marie.  Not a lot of freebie McDonalds etc on this route. They are only little teeny tiny towns from here on around. LOL 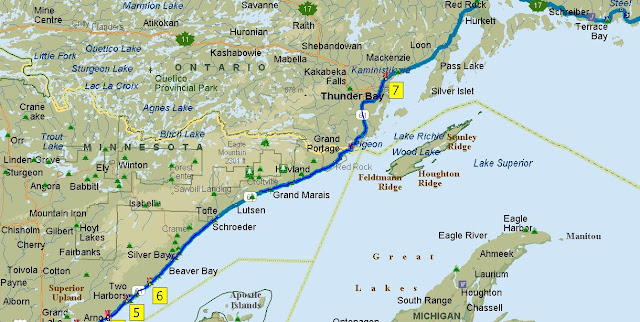 We headed out on the road from number 5 on the map ---and soon saw the signs for Gooseberry Falls State Park. number 6 on the map. It was strange, as we drove into the main parking lot and we used the RV and Bus parking area. No fees.  No sticker required. Hmmm?  We walked to the visitor center... also no fee or sticker or permit required. This was new to us! Free?

Then we saw people walking down to and back from the falls with their dogs.... so Finney and Binney were leashed up for our trek to the three different waterfalls on the map. 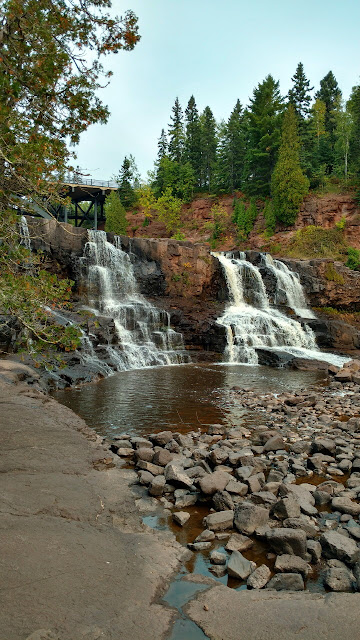 I was fascinated by the tree roots in these pics! 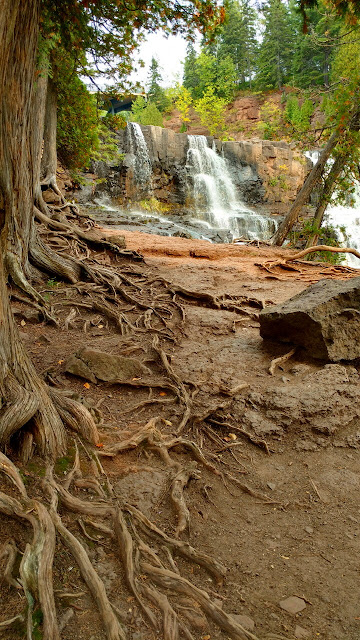 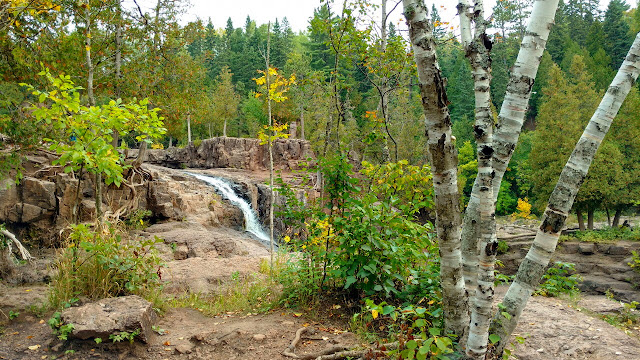 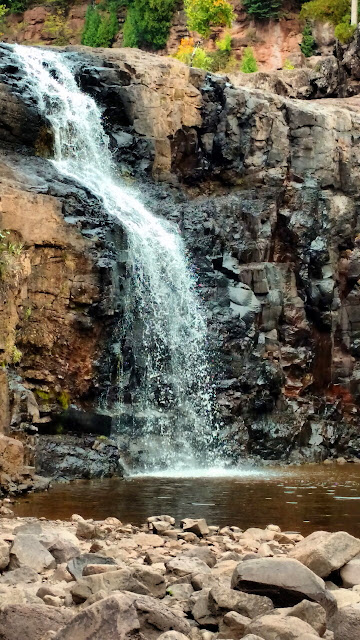 Here is a You Tube that I shot of the waterfalls:

We walked all around, climbed down and up stairs (I counted 68 on one stretch of stairs) and sooo many people wanted to stop and admire and pet our dogs.  They are getting much better at socialization and don't shrink as much when people ask to pet them.

Finney thought that the BEST part of the walk were all the other dogs!  He saw 2 huskies, 2 terriers, a rambunctious German Shorthair pup, a few chihuahuas and a big goofy hunting dog.  He was in his glory and had his dander up with a flying tail and laughing eyes.  Binney was more friendly with the other dogs too and sniffed butts when she could. 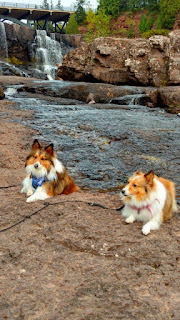 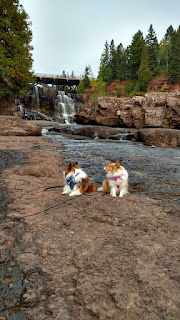 We admired the falls from all angles and offered to take a few pics of couples by the falls, in return they took a few of us.  After going through my camera later, some of the shots were framed REALLY bad and I had a lot of deletions.  Heh heh.  These are the best ones. 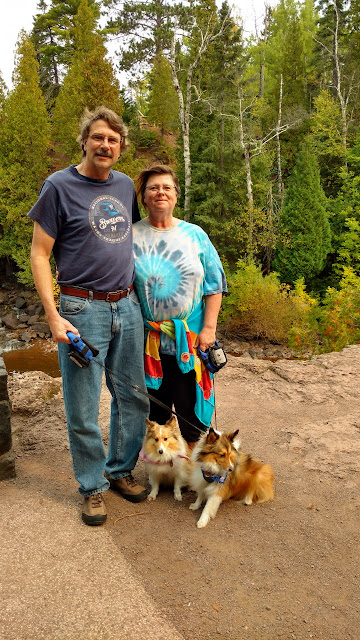 The rain held off all morning while we were at the park. It was kinda overcast (which makes for GREAT color pics) and warm enough to wear T-shirts. I picked up post cards for all of the grandkids in the gift shop. We made it back to the motorhome for a full doggie water dish and lunch for us.

We headed up the North Shore and googled to the next post office.  I had a shipment to make for a customer from my Etsy store, and I also popped all those post cards out in the mail at the same time. Small town post office hassles: first she was a sub because someone didn't show up, and then she couldn't find the stickers for the postage to print on.  Next she could not get the credit card thingie to work.  Finally I ran out and got the exact change for the postage in CASH.  LOL!   She said the outgoing mail truck already left for the day (at 1 pm?) and my stuff wouldn't go out until tomorrow anyhow. Oh well.  I hope it all gets there sometime?

From there, we managed to find the cheapest diesel price for the next few towns before the Canadian border by using Gas Buddy app on the phone.  We pulled in and had to fill up in three separate transactions, as the pumps shut off every $100.00   We put in 78 gallons of diesel for $2.69 a gallon $211.00  averaging 8.2 mpg. Now we are set with enough US priced fuel to get us up around Lake Superior and back down into Michigan without having to purchase any in Canada.

As we got about 20 miles away from the border, I realized that I still had a small part of bottle of wine left from the night before.  We already had our allotment on board of whiskey, beer and wine --- 2 bottles of wine per person, or 1 bottle of liquor and one case of beer per person. 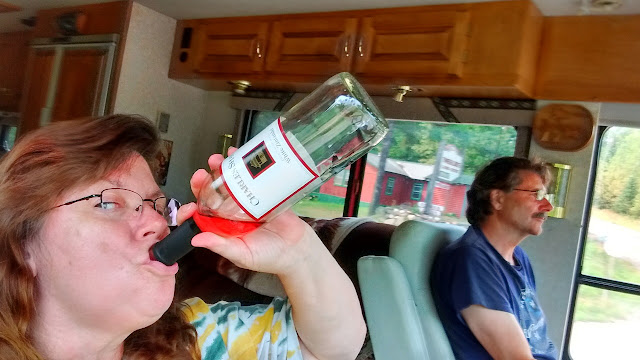 
We were all prepared to arrive at the border with our passports, dog health papers and rabies documents, and no fresh meats, fresh vegetables, dairy, produce or citrus on board.  We were not wearing sunglasses so the Canadian border guards could see our eyes. We had both dogs on leashes in case we had to leave the vehicle while they conduct a search. We were ready. Or so we thought.

As we pulled up to the border control station building on the Canadian side, there were four lanes to go into under the overhanging port. No words, just symbol signs overhead. We saw the first narrow lane for "cars" with a cone to one side, and it was VERY narrow.  Seriously, it had a car auto symbol over it.  The next two lanes were blocked off with big orange highway dividers and were not in use.  The far right lane was the widest at the end with a truck symbol on top.

Well, evidently NOT the trucking lane, as we found out!  The little sign on the trucking lane booth said to pull ahead and park and come in with your papers.  We started to pull ahead slowly to park to the side. The border guard flew out of the building, whistled and shouted loudly HEY!  He sternly reprimanded us!  We said we didn't think we could fit in the auto lane. He hotly replied: ALL VEHICLES USE THAT LANE!

Then he told Steve to BACK UP????   We said we can not back up... but we could get out and unhook the Tracker. Steve explained that tow bar pistons are not made to be pushed in reverse.  We could unhook it in just a few minutes We would gladly do so if he wanted.  We smiled.

He finally blew out a little snort and started asking the normal questions. How many on board? Pets? Passports? Where are you from? How long are you staying? What amounts of alcohol and tobacco on board?  .... He left with our passports in his hand and walked back to the building. A few short minutes he came back out (no entering the rig nor asking about food) handed us our passports and wished us a nice day. We wished him one back and got the heck outta there! WHEW!

Oh boy... I hope we can get back INTO the United States with more ease than that.  But we thanked our lucky stars that we didn't have to get searched, we didn't have to unhook or back up, and we followed all the rules as best as we could.

Now it was going to start raining as we pulled into Thunder Bay, Ontario Canada. Number 7 on the map. We found our way to the third Walmart on the far edge of town.  We got into the store and stocked up on produce, as we wanted lettuce, tomatoes, cucumbers for salads as well as potatoes and onions and carrots.  Some things were cheaper and some more expensive. Like eggs were $4.93 a dozen and shredded cheese was $5.57 for a small package.   Of course, at the checkout, our American Express instantly does the conversion to US dollars so we are really paying less than the total on the slip.

We hopped back into the motorhome before a deluge of rain came crashing down.  Fortunately, we had found a parking space under the abandoned gas station on the parkinglot for the Walmart.  So we have a covered port over us! There are three other motorhomes here as well, but we got the prime spot!

We tossed a lasagna in the oven and took a little jaunt over to the LCBO liquor store to replenish our supply... enough to get through the next two weeks at least.  I found three bottles of interesting wine that is made in Kittling Ridge, Vaughan, Ontario, and Steve bought some micro brew beer called Steam Whistle brewed in Toronto.  Included in the case was a nifty heavy pewter bottle opener with a key chain type drink coaster as a gift! 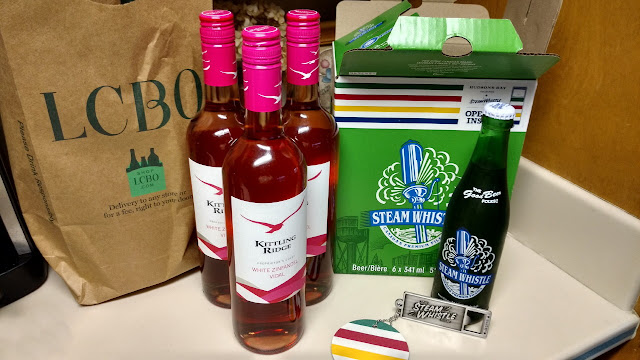 In the morning we will head over to the BMO bank nearby and convert some US to CN currency for self serve pay envelopes at campgrounds or roadside veggie stands that do not take a credit card.

(on edit: BMO in the morning also had free WIFI so I am posting my blog here in the lobby)

Our dinner was ready for us, along with salads and garlic bread. 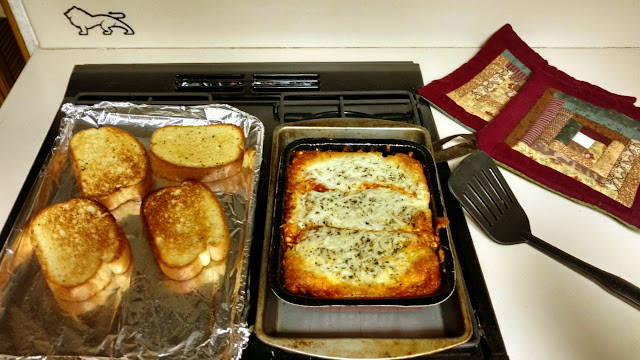 The rains poured down and thunder and lightening are shaking the rig as we ate dinner and watched a movie on the DVD player. We heard sirens and saw firetrucks racing out of town, not sure what happened as we didn't find any local news stations on the tv scan from our antenna signal.


We toasted with our Canadian Beverages to our first night back in Canada and that we made it through the border crossing with only a little bump in the road.  Now onwards and eastwards around the Big Gitchee Gumee!

Posted by KarenInTheWoods at 9:08 AM