One down, one more to go

We trekked over the river and through the woods....  to Steve's parents' Thanksgiving gathering.  We met in the middle of the state, in Neenah at the Holiday Inn River Walk hotel for a meal.   We listened to part of the Packer game on the way down on the car radio, but I also had it recording at home on the VCR.

Everyone was happy to meet and greet and EAT~!    We had a nice quiet room for private dining, but also the guys kept making trips back and forth to the foyer to keep tabs on the Packer game .... returning to announce the score from time to time to the rest of us. 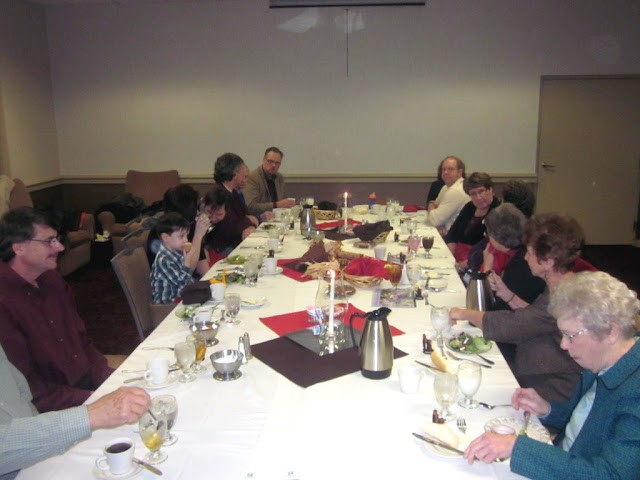 We only had two wee ones at this gathering, little Jameson, our grandson, and little Lucas, Steve's neice Jen and Robert's little guy, who just turned one. They were the life of our party, and both were very well behaved and polite. 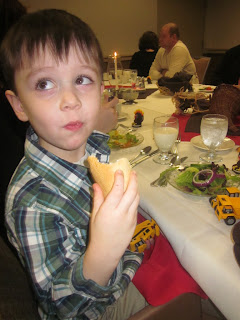 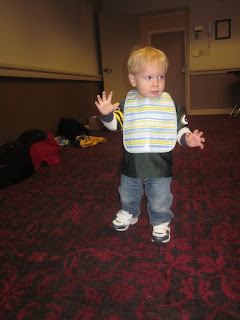 Stories were shared and laughter was heard.   Lots of plans for upcoming vacations, new jobs and memories of the past holidays.  We all thought of little and big blessings we have and went around the table, sharing our thoughts. 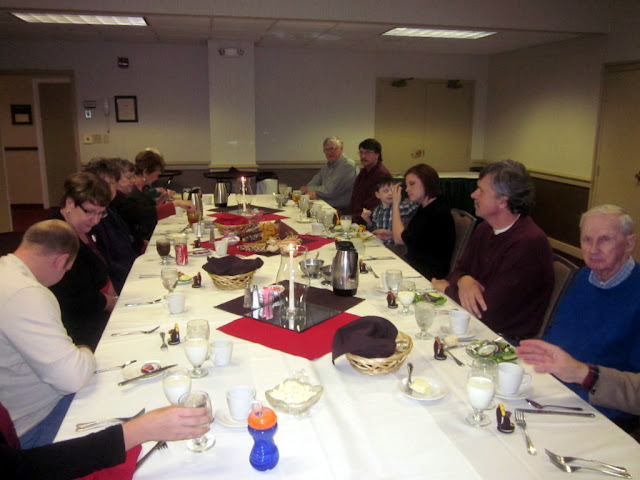 My little turkey cookies were well received and enjoyed by all.  Jameson especially liked them and took his time disassembling his to chew on it.  I said "Don't worry, Granmuddah brought EXTRA ones so you can have TWO!"   Little Lucas was winding down and got a nice long cuddle with HIS Granfaddah (Steve's brother Mark) 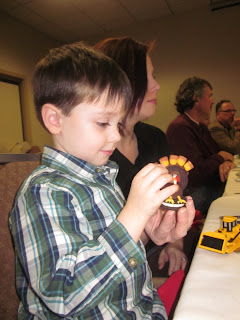 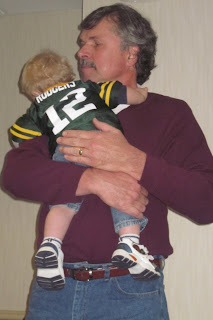 Them Three Pfundtner Boyz.....   Steve, Pete and Mark.  They are admiring some pics from Pete's recent trip  (I think it was a bunch pics of old cars from a museum)  What a good looking trio of men! 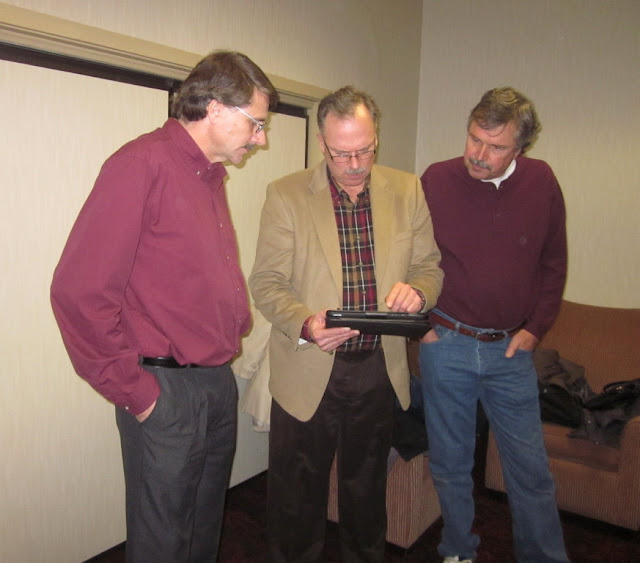 And the Patriarch of the Pfundtner Clan, their father, Paul.  It is his birthday soon, so he was busy opening presents.  (that is a bird seed wreath to hang out doors by their feeders) 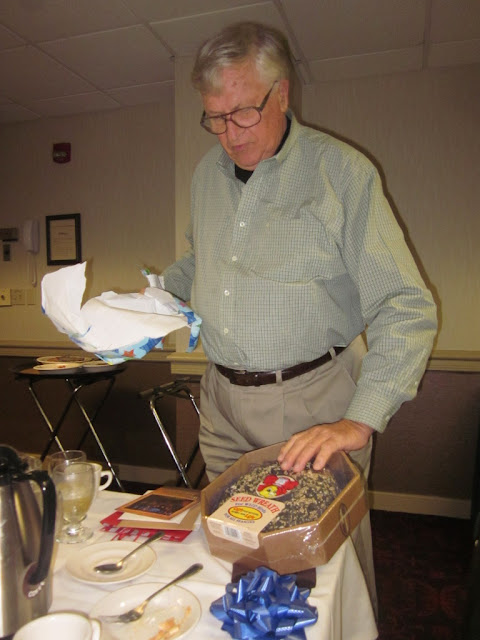 Once the meal was done, we all gathered by the hotel foyer where there was a tv, so we could keep tabs on the end of the Packer game.  (they won!)    Jen was keeping the boys occupied with rides on the bell-hop's cart!  What fun!   There wasn't anyone else around, so they weren't bothering anyone, and the hotel clerk at the desk smiled and enjoyed their antics. 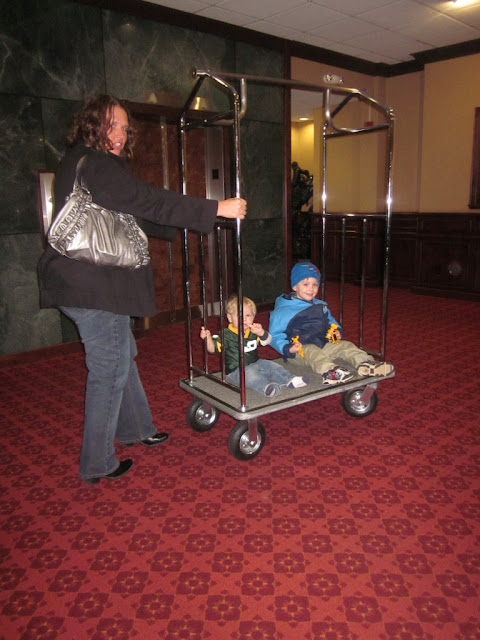 Both boys were getting pretty sleepy, and Lucas has a long, long trip to Florida ahead of him.
So hopefully he will sleep all the way to the southern part of Indiana
once they hit the road after our gathering. 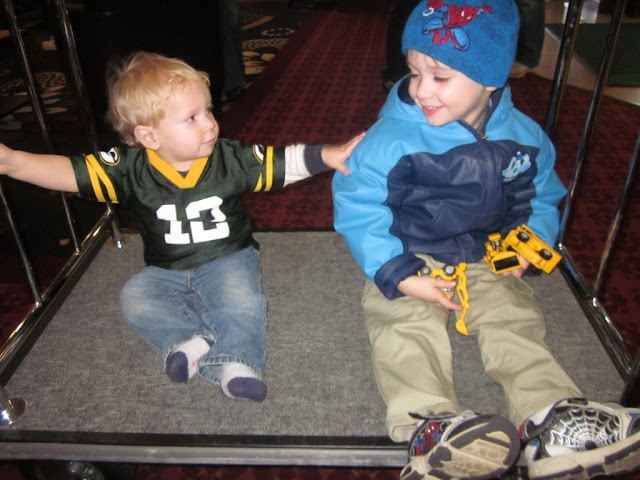 Good byes were said, and plans for Christmas were made.
Now... we have to have Thanksgiving Gathering II on Sunday with our kids and grandkids.
I am cooking up a bird, all the trimmings, and 10 more turkey cookies are saved for the day!
We drove home and hung out watching the pre-recorded Packer Game all over again.  We knew the ending score of course, but it was fun to see all of the plays that we envisioned in our minds from listening to the  radio.   What a great ending to a nice day of family love.
As I write this, it's Black Friday.  We are avoiding the stores at all costs.  That type of craziness is not for us.   Instead, we are here at home, and little Chelsea came to spend the day.  Her daycare is closed, but her mommy is working and her daddy is hunting.   So Granfaddah made us up some homemade waffles for breakfast.  I think later we will put the stinker to work with us, putting up the holiday lights on the house and deck.  "What's the point of having a dwarf if he doesn't do chores?"   (my favorite line by Henry Fonda in 'On Golden Pond')    Then after naps, we might crack some eggs and bake some brownies?
Oh.. speaking of hunting, both my brother and my sister got bucks up at hunting camp... they use every bit of the deer and fill their freezers for the winter. 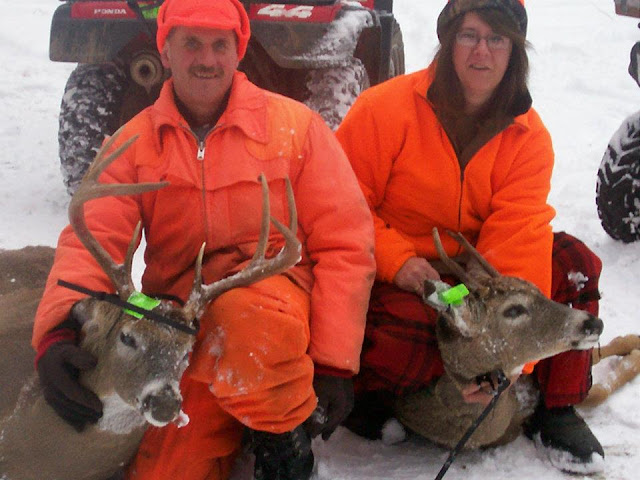 Also my nephew Darren got a buck too!   They all hunt up in Michigan's Upper Peninsula, and it's a family tradition for all of them to head up into the woods to Da Camp.  Hunting season is so *sacred* up there that even the schools close down to allow the students to go out hunting too. 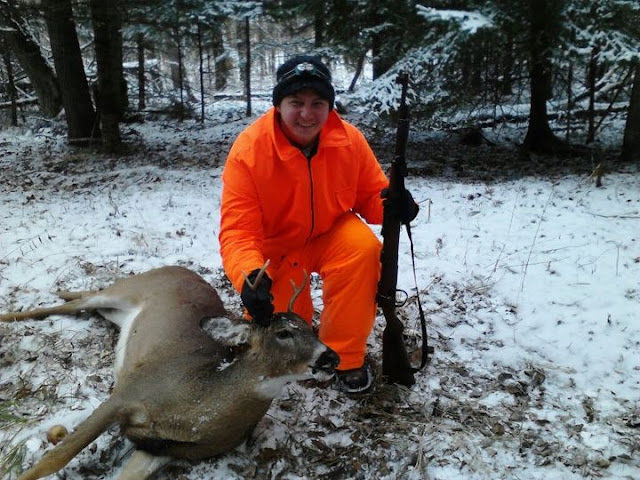 Our son-in-law Mark also got a buck and doe this year during bow season... So we have a whole slew of hunters in the family to provide venison for the rest of us!  LOL
Well, the little one is done with her waffles, and Granfaddah is getting out the lights and garlands and cords for the outside decorating.  Time to get bundled up and head on out to help!
We hope everyone had a wonderful holiday with their friends and family.  We are so thankful that we have such good family to surround ourselves with this entire weekend, and looking forward to cooking up that TWENTY TWO POUND BIRD on Sunday!
Posted by KarenInTheWoods at 9:41 AM