Can You Tell Me How To Get.. How To Get To Sesame Street?

Oh my, what a busy weekend we had!

Our son Dan turns 29 on the 8th and he wanted to have a party at his house on Saturday... so Granmuddah and Granfaddah to the rescue to babysit little Allegra so the grown-ups could party!   (like they REALLY had to twist our arm and beg, huh?)

Saturday afternoon this Granmuddah hopped in the car while Granfaddah decided to stay home and hold down the fort.  He cleaned windows, cut the lawn, moved some furniture and put the ladder up to the 18 ft tall cathedral ceiling and washed the ceiling fan fins and all the light fixture glass at the same time!  My oh my, he was busy.  But I got to PLAY!

I picked up Allegra at her house, and then headed over to join up with daugthers Erin and Heather, and son-in-law Jesse, and our other two grandkiddos Chelsea and Jameson!

We went out for a nice dinner at Fazolis restaurant (kinda fast food italian with lots of FREE breadsticks!)   We had a nice quiet part of the restaurant, and we had a wonderful time. 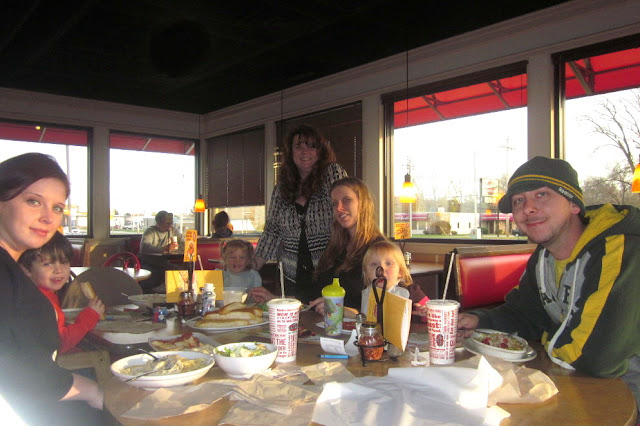 I am quite proud to say all three of our grandchildren are well-behaved and comfortable with sitting quietly in a sit-down restaurant and know how to act.  No wild hollering, food-throwing, whiny brats for us!  I HATE that in a restaurant, or anywhere else, where people can not control their children.  It's not the child's fault, it's the parents fault for never teaching them how to act accordingly or how to have a simple meal out without it becoming a disaster.   From baby on, we have taken our children to nice places and sit-down meals without a problem.   And if my child WERE to even think of trying to act up, OUT the door we go for a stern talking to in the parking lot and return with a whole new attitude.

Our three grandkids were happily coloring until the food arrived, and with a ratio of four adults to three kids, we had a nice conversation with all of them. 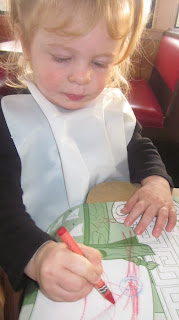 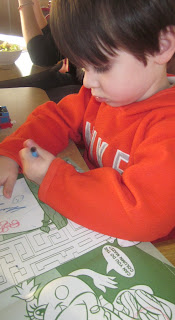 I am so glad to see our grown children are implementing the same expectations on their children when out in public.  It makes life most pleasant, to enjoy the company of the grandkiddos and have a nice dining experience with them.

Off the soapbox, on to the next event.

We piled back into the cars, snapping all the wee ones in their respective car seats and drove over to the Brown County Arena.  We were looking for ELMO!!!   He was supposed to be singing songs at a Sesame Street Live production.   The kids had NO idea what was up, and when we got in the foyer, there was a little Elmo in a plastic case on display.  They were just happy seeing THAT and wanting to keep pressing the buttons to make him sing.  LOL  ... 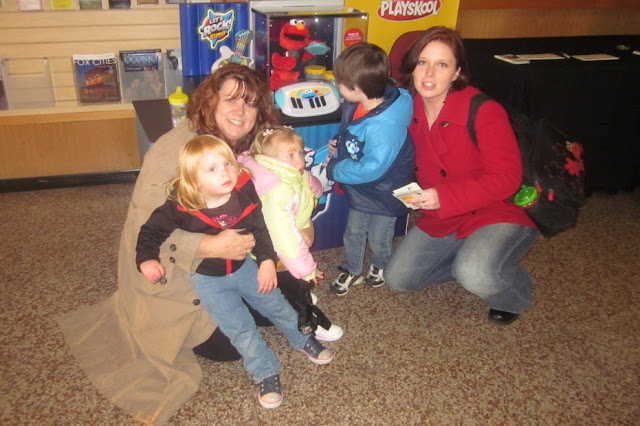 Okay, NOW what should we do?   haha!  We handed over the tickets (ouch, they were $20 each for the prepaid seats ordered online in advance a few weeks ago)  and found our way to our seats.  The kids had NO idea what was coming next.
Auntie Heather had brought along some glowinthedark items from the dollar store, thus eliminating the whining cries from our kids for the high priced items from the vendors wandering up and down the aisles.  She even had extra ones she gave to some of the kids seated around us too.    The kids were happily playing and looking around and not sure what was next.
Well...   the voice of Big Bird came over the loudspeaker... telling us the show was ready to start and we told our wee ones that ELMO was coming on the stage.. to look over there and the music started.  I was video taping our grandkids and it was just amazing.  I was aiming at their little faces as the curtains opened and all these kids were screaming like teenagers at a rock concert!!!  Ours chimed right in-----  "ELMO! ELMO! ELMO!"     It was HILARIOUS!!!     The show started and our kids were transported to a wonderful land of Sesame Street===== 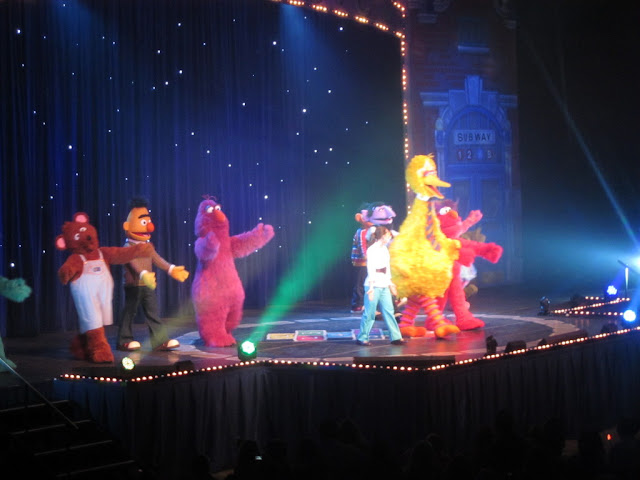 All of their heroes were there!  Ernie and Bert, Elmo, Big Bird and the whole gang.
The kids screamed in delight as each of their favorites took over the stage.
It was a rock star concert for the Toddler Set! 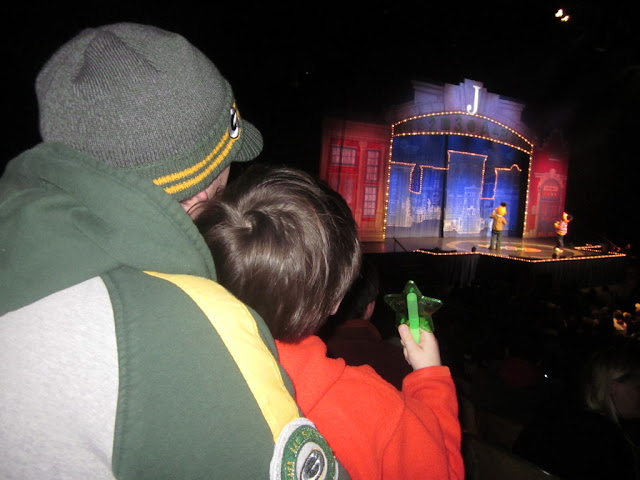 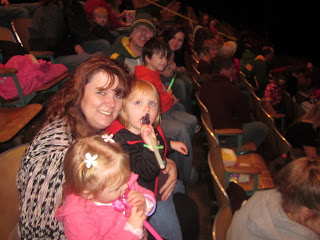 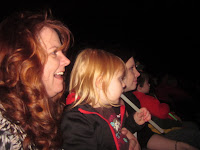 And I think we grownups enjoyed the show as much as the kiddos did.
Right before intermission, we managed to complete diaper changes one at a time, as the bathrooms were nearby.  So we avoided the hustle and rush and long lines at the bathroom that would take place in a few minutes.
At intermission, Erin was thinking ahead again and had smuggled three stuffed Elmo toys along in the diaper bags, compared to the high priced ones being hawked by the vendors.  She bought them for $5 each in advance at one of her stores.  She manages a large district of Family Dollar stores in the NE Wisconsin area.  She is One Smart Cookie!   I also brought them each a little Sesame Street popup book to read and keep as a treat to remember this night.  Allegra was in love with the big boy in front of us, and kept flirting with him.  She would tap him with her glowinthedark magic wand to get his attention!  My oh my, don't these girls start early chasing boys?! 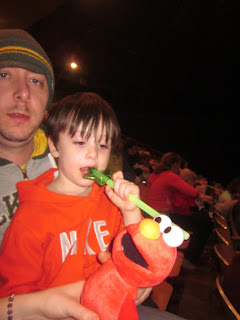 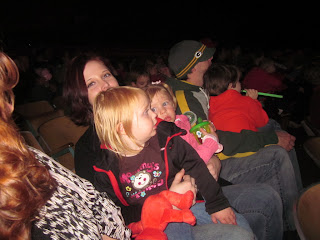 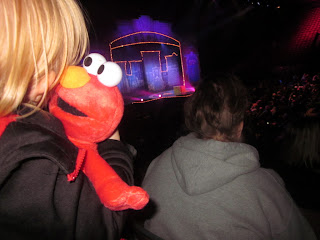 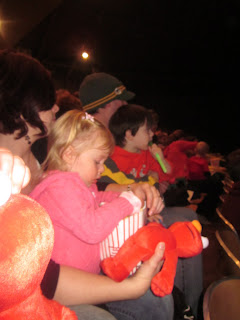 Erin bought some buckets of popcorn and a big cotton candy to share among the kiddos.  I think Chelsea ate half of a box all on her own!  Their own sippee cups were brought along, saving our ears from having the little ones begging for a drink when the only thing that was available was soda at the venue.   They don't get soda, so we were glad we had along juice and water.
The second half of the show started, and the kids were transfixed by the light show, and at times the lights made little stars all over the domed ceiling of the arena.  I think Jameson liked the lights the most.  We rotated kids on our laps from time to time, so nobody got too bored sitting on one lap all the while.  Jameson clung to his daddy most of the time, and I think his daddy loved the show as much as his little boy did!
It was an hour and half show, with a grand finale of all the characters. Complete with fireworks that shot out streamers and confetti over the audience.  What fun!!!   But soon it was over.   Not too long to bore the kids, and not too short, so we got our money's worth.   Yes, we found the way to Sesame Street! 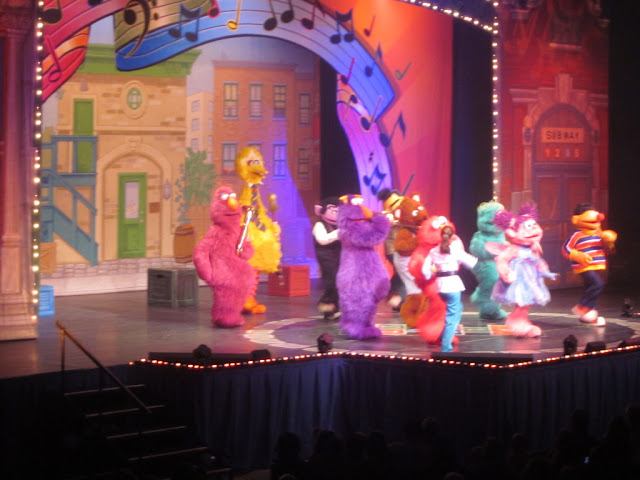 All three kids were fast asleep before we got to Heather and Jesse's nearby apartment...  I think we wore them out!   We split up and re-sorted toys and diaper bags and books and sippee cups.  Now it was a 40 mile drive back home through a lot of construction for me, in the dark.  I hate driving at night, my eyes hurt when oncoming lights come on and then pass by, then I have to almost squeeze them to make them feel better again.  I don't drive at night often at all, but this was for a special purpose, so I put up with it.  Once we get beyond the major highway, it gets better as I get more rural.  I had Precious Cargo along (Allegra)  who was fast asleep....
Granfaddah came out to the car when we got home, and carried the sleeping tot up to bed.  A quick diaper change and pajamas on a sleepy rag doll and she was out in an instant.  Too funny!
She woke up about 2 a.m. and crying, so I popped her in bed with us.  She is a very active sleeper, and kept tossing and flopping and flipping all over us.  We have a king sized bed, but even that was not enough room for her and us!  haha....  about 4 am she flung her arm wide so fast and hard in her sleep, and whapped Granfaddah right in the nose!   I don't think we slept more than 10 minutes at a time before the little flip-flopper was waking us up again.
But wowowowwww was she up early!  at 6:30 by the natural clock, which was 5:30 on the real clocks due to the time change.  Up and at em!   Raring to go and play play play with the toys and the dogs and whatever else she could find to play with!   We finally had to put Duchess out on the deck to get them to slow down a bit!   Even Elmo got to ride on Duchess's back. 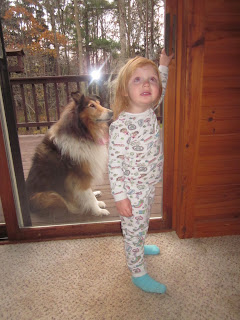 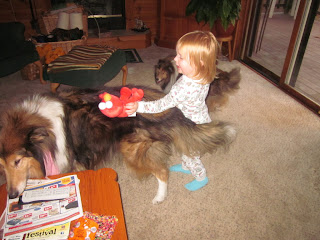 Once she wore out both doggies, poor Duke was exhausted and laying on the couch.  The little stinker was thrilled to have Duke wear her socks on his nose!   Then Granfaddah convinced her to put them back on her feet again.  What a little goofy girl.... 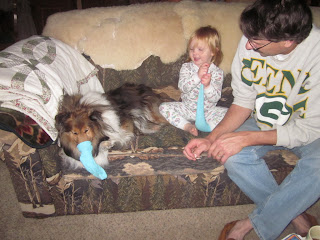 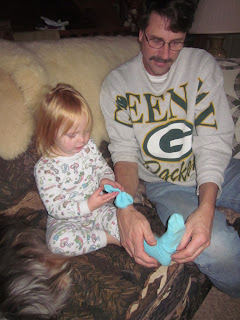 I popped her in a bubble bath for a while, mainly to contain her to one spot!  She played and splashed and swam like a fishie in our big tub, and Granfaddah got in a nap on the couch.  I was on duty, so no nap for me!
Ahhhh, the little one was going strong till noon.  I worked on making DVD's for each grandchild from my videotaping before, during and after the concert, and created a slideshow of pics for them too.  Once I got all three copies burned onto DVD's, we loaded up the little gal and hauled her back to Green Bay to her Mommy and a hung-over Daddy.  LOL   Then we went home and took naps ourselves before the Packer game came on tv at 3:15.
We hope she played her DVD over and over again and snuggled up with her tired out Daddy... singing:
"Come and play....
everything's AAAA okay...
friendly neighbors there....
that's where we meet...
can you tell me how to get...
how to get to Sesame Street?"
Posted by KarenInTheWoods at 8:47 AM