Yooper Foods of the U.P. of Michigan on my ride home

On my way back from the Upper Peninsula of Michigan on Sunday, I was cruising along the shores of Lake Superior and snapped a few shots to share.    (yes, sassy me, I did it while driving and snapped quick when there weren't any cars coming)   Honestly, I was missing my comfortable diesel motorhome, and darling hubby Steve to drive!  I was tootleybopping along in my little Saturn, all alone, and I had my new weaving music cranking on the stereo and life was good...  A fellow weaver, Ellen, was following me to help find her way to get around the road construction by Iron Mountain and Niagara. 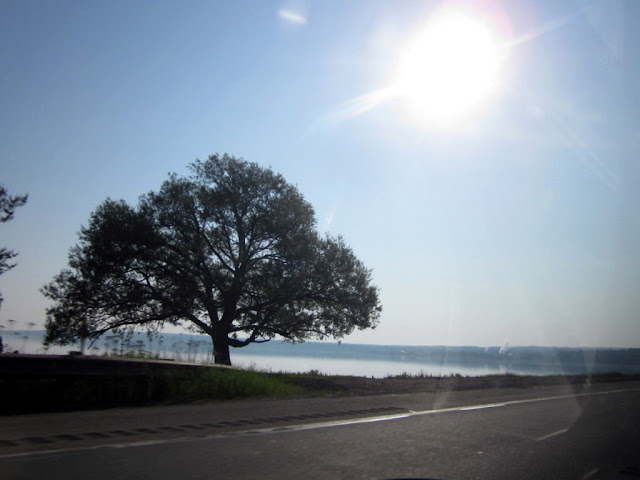 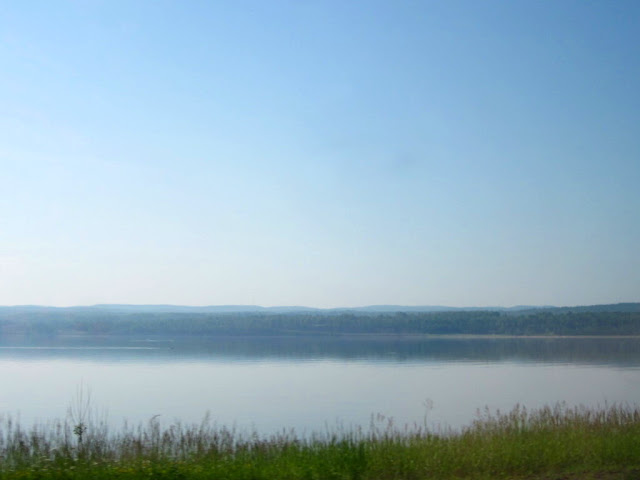 The waters were strangely calm with barely a ripple.  Usually it's very wavy and windy!
The rugged shoreline dotted with trees is typical of the U.P.'s Lake Superior 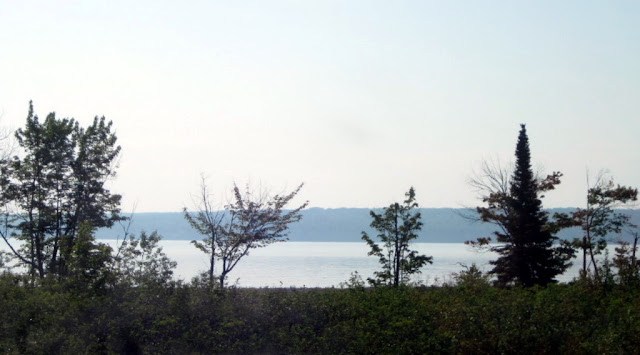 I remember camping along here as a child, in our Camper Bus.  We would go all the way up to the top of the Keewenaw Peninsula to Copper Harbor.  In those days you could pull over along the shoreline, build a bonfire on the beach and have a great time.  We would camp overnight right there on the beach.

Here is my 200 mile journey on my sunny Sunday morning: 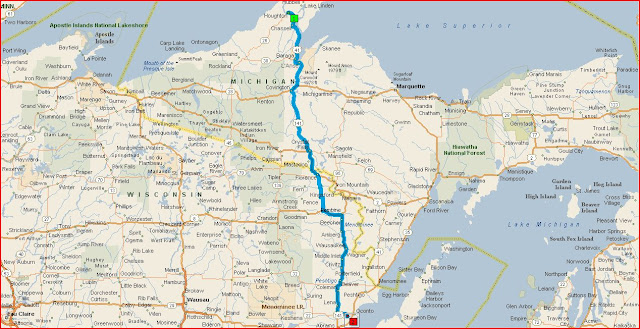 As soon as I got south of L'anse, I was heading deeper into the woods as I went towards my home stomping grounds, Iron County.  Logging was a primary resource of the U.P. along with mining iron ore and  copper.  Most of that is gone now.  Towns are few and far between, and cell phone signals non-existent. 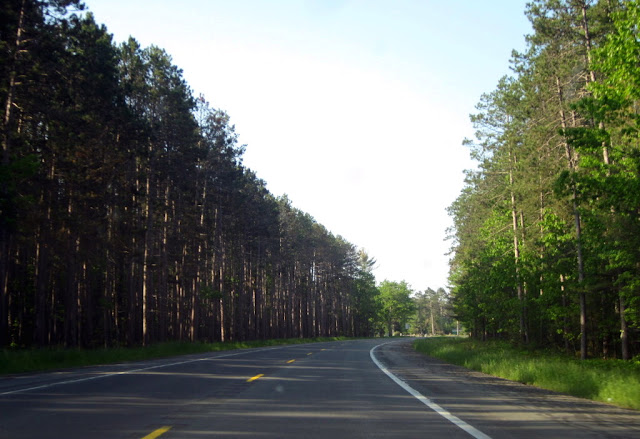 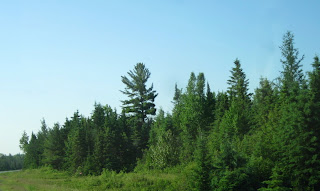 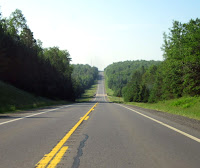 I made a pit stop at a grocery store in my home county as I passed through.  There are certain foods that are only sold in the U.P. and by local folks who make them right there.

While driving down from Houghton, I planned my pit stop in Crystal Falls at the Jubilee grocery store.  Usually I go to Iron River, but this was on my way and I needed to stock up!

Here was my treasure trove of Yooper Foods! 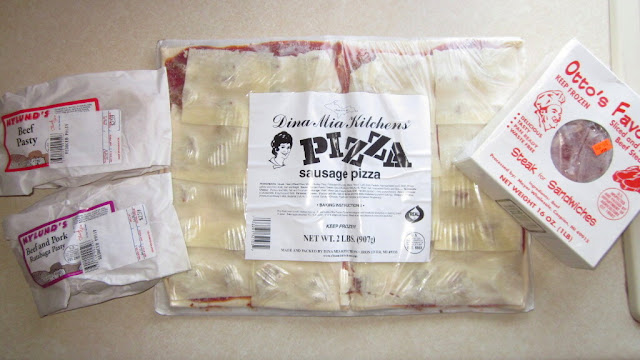 Let's go left to right......
First on the list was NYLUNDS PASTYS!
http://www.nylundpasty.com/index.html
Wheeeeeee   Here is a screen capture I did from their website:
What is a Pasty (pass-tee)?
The pasty is a simple food and can be described as a portable meat pie.

To many people in the Upper Peninsula of Michigan, the pasty is much more than food, it is an identifying cultural mark that gives them their own identity. When the Cornish came to the copper mines of the Upper Peninsula, they brought with them a lot of mining knowledge which the other ethnic groups did not have.  The pasty was the standard lunch for miners.  The pasty became popular with these other ethnic groups because it was small, portable, was very filling, and could stay warm for 8-10 hours.  Pasty rivalry occurred between the Finns, Swedes, Irish, Poles, Germans, Scots, Italians, and French with each group  contributing something in the way of seasoning and other ingredients.  All groups agree that pasties must contain two things, potatoes and onions. The portability of the pasty not only made it easy to carry, but if it should get cold it would be relatively easy to heat up.  This was done by putting the pasty on a shovel and holding it over a head-lamp candle.  Miners never ate a pasty with a fork, they ate it end to end, and held it upright to keep the juices in.  Since entire families worked in mines and each member of the family wanted different ingredients in the pasty, the wife would stamp the bottom corner of each pasty with an initial.
The Myth Surrounding the Pasty

According to the Cornish Recipes, Ancient and Modern, "The true Cornish way to eat a pasty is to hold it in the hand, and begin to bite it from the opposite end to the initial, so that, should any of it be uneaten, it may be consumed later by its rightful owner.  And woe betide anyone who tak's another person's corner!"  There was a superstition among the miners that the initial corner should not be eaten, instead it was dropped on the ground for the mining gremlins (also known as Knockers) to eat.  These "gremlins" caused mischief in mines, causing accidents and mine collapses, feeding them

supposedly kept them out of trouble.
The pasty is a simple food and can be described as a portable meat pie.  It remains relatively unchanged today, a few places have put in healthier vegetable shortening instead of lard, and a coupld of other minor changes like the cut of meat used.

Nylunds makes the pastys in Crystal Falls, MI and sells them locally in the stores.  I like the authentic beef and rutabega the best.  There are hybrids out there like a chicken pasty, pizza pasty, veggie pasty, but they are all "imposters" and you miss the true flavor if you try one of those instead of the original! 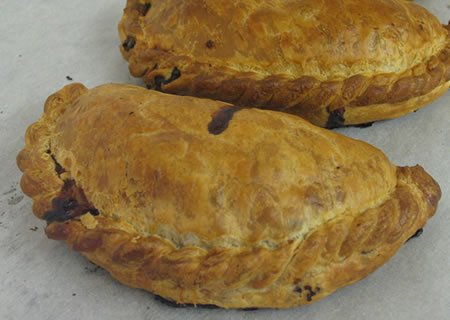 Some slather them with catsup or gravy, but I just like them with a dab of butter.....
Okay.. next on the list is the Dina Mia pizza!  The one in the treasure trove photo is the large rectangular shape.  I bought 8 of these and folded them in half to fit in our side by side freezer.  (thus the crease in the photo) ...  They do sell them in a smaller circular shape, but we like the large rectangles.  We cook up half at a time for the two of us, and the other half remains in the freezer.  School kids even sell these as a local fundraiser!  Heck with the boxes of gift cards or Girl Scout Cookies, lets sell pizzas!
There is a special flavor to the sauce and the pork sausage meat that I have not tasted anywhere else in all my fifty years on this planet, and in my travels all over the United States. They use little fennel seeds that add a distinct flavor.  They also make a line of authentic Italian pastas, sauces, raviolis, gnocchis and lasagnas.  Dina Mia Kitchens are located right in Iron River, where I went to school, the town next to Caspian.  Their items are sold in grocery stores, cooked as snacks in bars and supplied with a pizza oven to cook them right behind the bar for the patrons.   They have quite a following.  More information about them on their website:
http://www.dinamiakitchens.com/products.html
Two restaurants serve their food too:
Dina Mia Kitchens is also affiliated to Dina Mia Pizza in Rhinelander, Wisconsin owned by Peter and Linda Saving (715.362.7347) and Dina Mia of Florence, Wisconsin (Dina Mia Supper Club 715.528.4760) owned by Pam and Dennis Krueger. Both serve excellent food in a friendly atmosphere. When in those areas, please drop in and try some hot, delicious Dina Mia food that loyal customers have been enjoying for over 50 years.
Last on the list in my Treasure Trove of Yooper Foods are the small white boxes called Otto's Steaks.  These are still made in my little hometown of Caspian, Michigan by Meyer Meats.  They used to be called Andy's Steaks years ago.  They are stacks of thin sliced beef steak, separated by wax paper, that you can plop frozen onto a fry pan for a quick hot sandwich.  I start browning the onions and mushrooms first as they take longer, but don't overcook the Otto's steaks!!!! 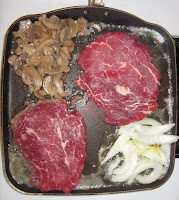 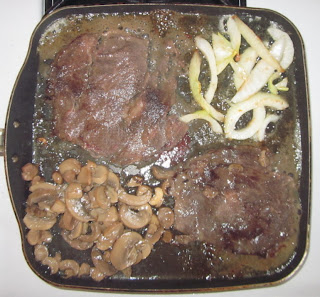 Slap em on a sliced hard roll or loaf of crusty bread and you have such a delicious treat that rivals any Philly Steak Sandwich out there.

So I stocked up on a pile of pastys, a stack of pizzas and only two boxes of Otto's Steaks, as that was all they had on the shelf!    The one item they did not carry was the Mama Russo's Lasagna that we prefer, but we know we can get that in nearby Menominee, Mi at Angeli's grocery.

I rushed home the last 100 miles to get them in freezer.
Savoring the flavors and thoughts of the good meals ahead,
to enjoy when we are at home and far from
the rustic rugged woods of
the U.P. of Michigan! 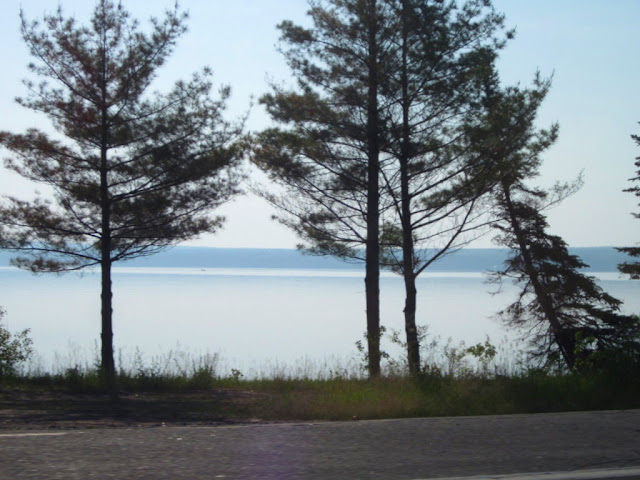 (writing this blog made me hungry, so I popped a frozen pasty into the oven!)
.
Posted by KarenInTheWoods at 11:51 AM