CAMPING- At our friends' cottage in the Nicolet National Forest

Our friends, Sharon and Fred, invited us to spend a weekend up at their family cottage.  We park our motorhome on their land which is located by the Nicolet National Forest in Wisconsin.

Spring has finally come to the northwoods... our leaves are finally out, and fresh greens of newly opened leaves with a variety of colors of the deep pines, the white birches and the light greens of the shrubs and ground covers.   It's a palette of forest colors of Wisconsin Springtime! 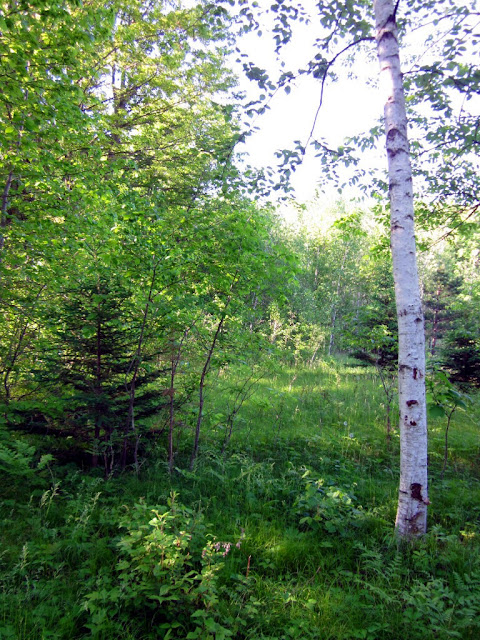 We loaded up the rig and headed up Friday as soon as Steve was done with work.  Sharon and Fred have a dog named Brandie, so our two doggers were happy to have a friend to visit as well. 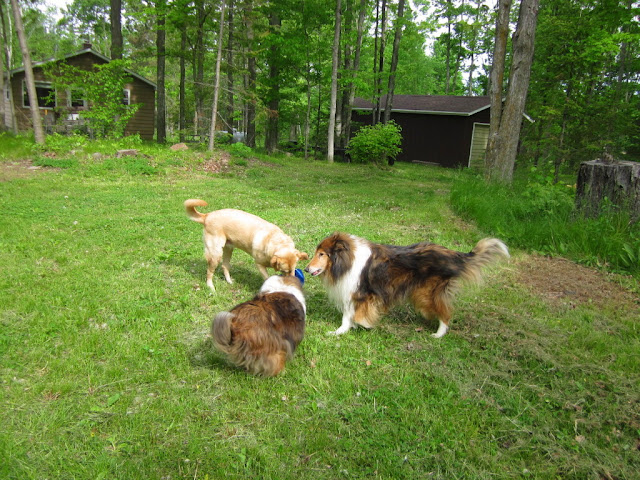 We pulled in and got set up in no time flat....  of course we have been here before and know just where to park and we are at home.  The nice thing about a motorhome is that we can pull in, turn it off, and we are basically done setitng up.  We later put down the hydraulic jacks and took out the awning but that is an *after* thing. 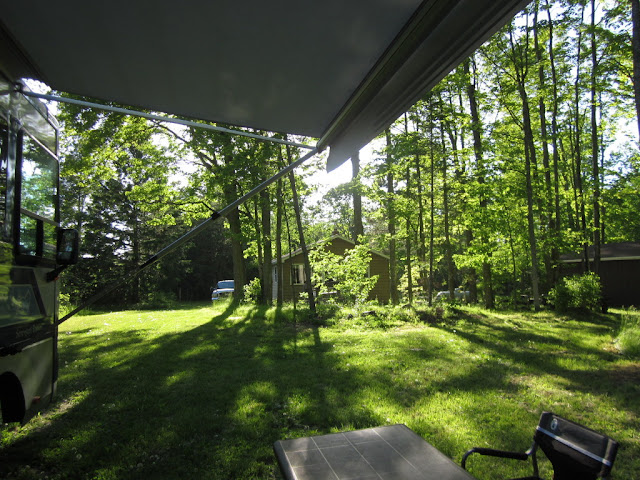 First we hopped in Sharon and Fred's truck and headed out for fish fry....  the old Waubee Lodge burned down and it's been rebuilt now in a much nicer log building.  It has a great location in Lakewood on Waubee Lake. 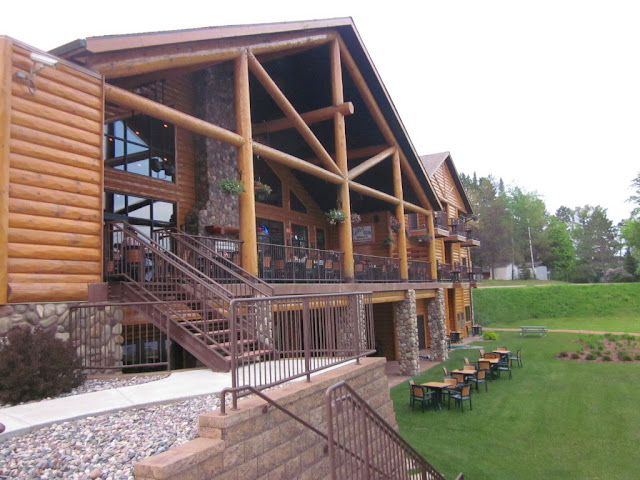 We had our cocktails and dinner out on the deck overlooking the lake... and decided on the seafood buffet which was very filling!  haha   I mostly enjoyed the clam strips, shrimp and german potatoe salad.  After dinner, we walked along the shoreline of the lake.  What a pleasant evening with very few bugs--- the lake was smooth as glass, and not yet filled with tourists on jet skis, racing boats or noisy water toys.  Afterall, the ice just went off these lakes a few weeks ago and that water is still very very cold!
The decor of Waubee Lodge is very rustic, and we loved the honey warm gold of the logs.  We felt right at home!  I loved these two little coons on a wall hanging.  The inside diners were surrounding the big aquarium or next to the huge fireplace. 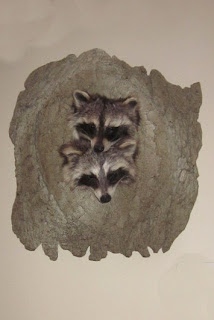 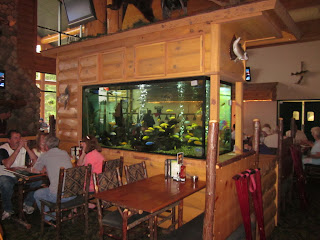 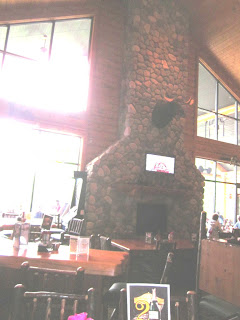 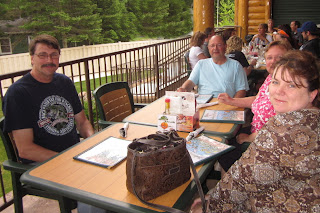 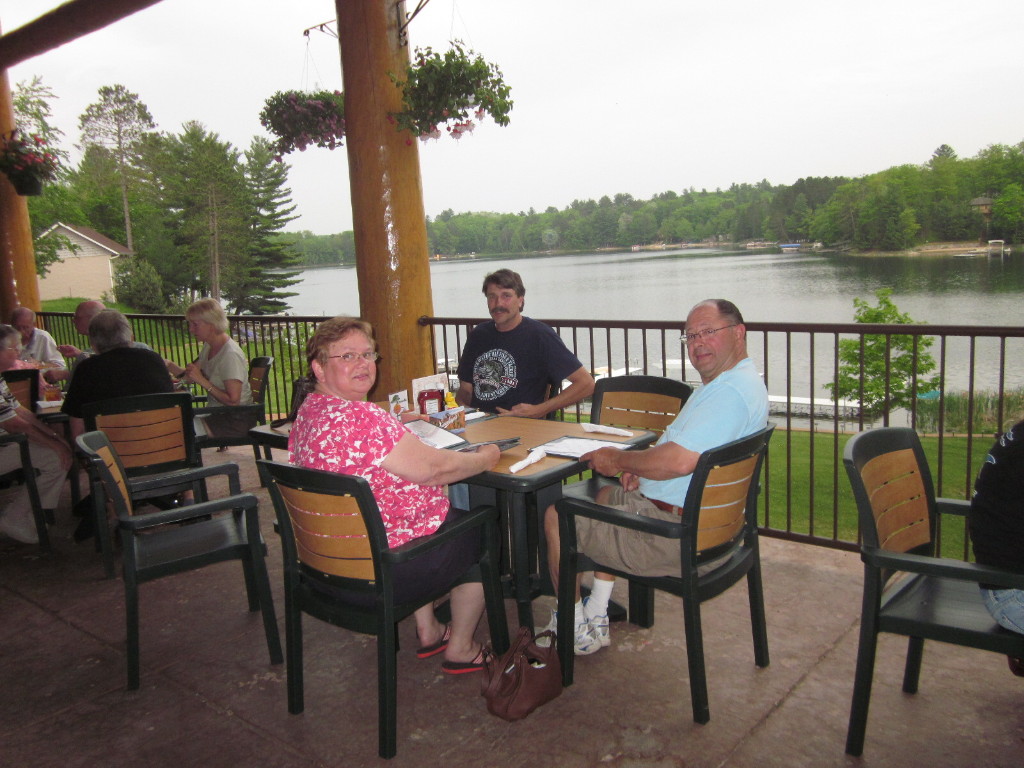 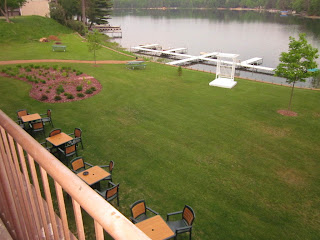 It was a very pleasant evening, and we went to bed with open windows (screens on of course for the skeeters which are as big as hummingbirds right now)   and we slept to the soft tunes of the crickets in the woods.  Ahhhhhhh   This is the first really warm enough weekend to sleep with open windows this spring.
In the morning, the sun was shining and the weatherman said it was going to be a very warm day in Northern Wisconsin... up to 90 and pretty humid too.   So out came the lawn chairs and not much more of any type of activity took place!   ......   the dogs lapped at the water bowl and laid in the shade too. 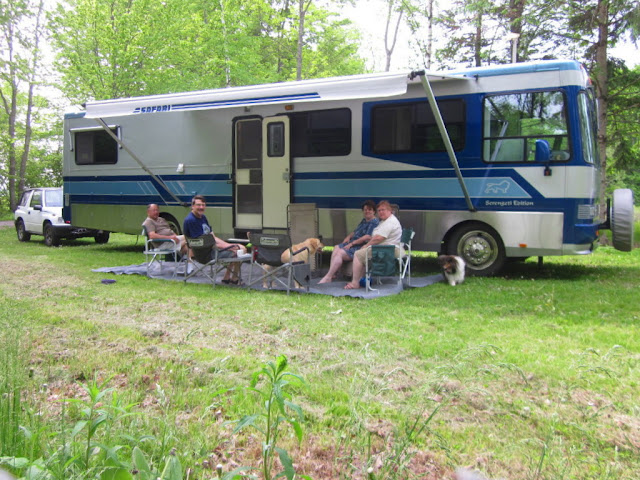 As we sat around, I was working on some new projects.... knit hats.  Using four different sized rings called Knifty Knitters, I was making some hats from various scrap yarns I had on hand.  What fun!   You don't need to know how to knit, you just wrap the yarns around the pegs two rounds, and then lift one loop up and over the other loop and off the peg.  There ya go, it just knit a stitch for you!~    I got five hats done over the course of the weekend.  What a lazy way to relax in a chaise lounge and keep the fingers busy too. 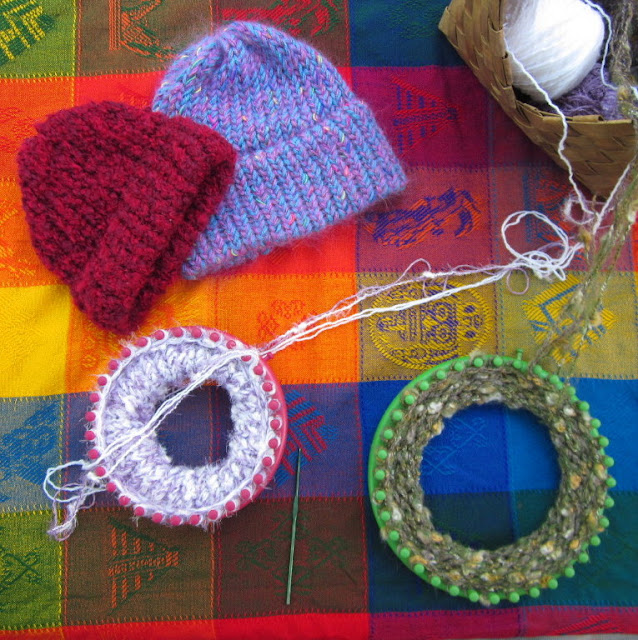 Saturday evening we put the guys in charge of the grill for supper.  They had to imbibe on a few cocktails first, and then they were ready to cook!   LOL  The menu was marinated veggies, sliced potato packets and some grilled chicken breasts.  Yummmmm Everything tastes better when cooked outside. 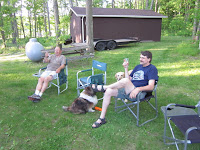 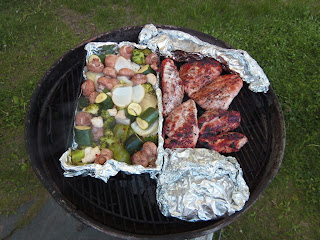 We sat up gabbing till our eyes would not stay open, and again went to sleep to the sounds of crickets out the open windows.   Nearby at the horse riding stables, there were some youngsters making some noise, we but we were so tired, it didnt' last long and we were fast asleep too.
The morning shone through the trees and dappled sunshine spread across the road... it was less humid on Sunday morning and very pleasant.   I whipped up some of Steveio's Cinnamon Sticks ----
(his invention of unrolling the pre-made refrigerator cinnamon rolls
and twisting them into sticks before baking--
no gooey middles and they bake faster too) 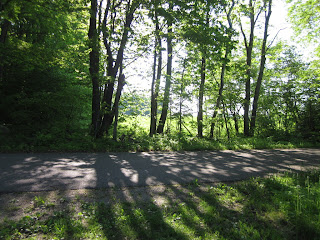 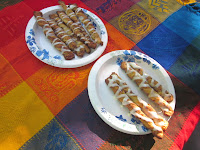 It was just the kind of morning that you dream of when freezing in the middle of winter.  The sun was shining, the birds were singing and it was a lazy Sunday morning.  Sharon took me for a little ride in their big ATV called a side by side.  Duchess went along for the ride, and Duke stayed back with Brandie and the guys.

The guys fiddled with a few big boy toys and things, and Fred got the tractor going and loaded on their trailer to bring back home with them.  We decided to toss a few brats on the grill for lunch, and Sharon manned the kitchen in the cottage and whipped up some delicious chicken salad from our leftovers from the night before. 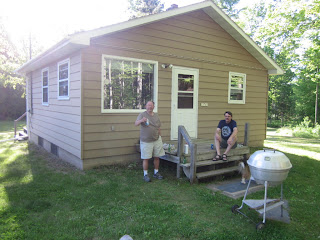 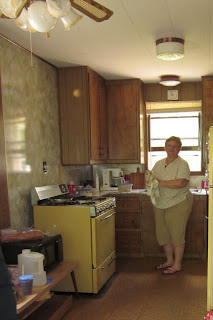 Fred, the Grill-Meister was tending the bratwurst
(purchased from our local meat market, Melotte's Meats in Brookside,
as we no longer buy Johnsonville brats... we boycott them---
who were a major contributor to Gubber Walker in Wisconsin) 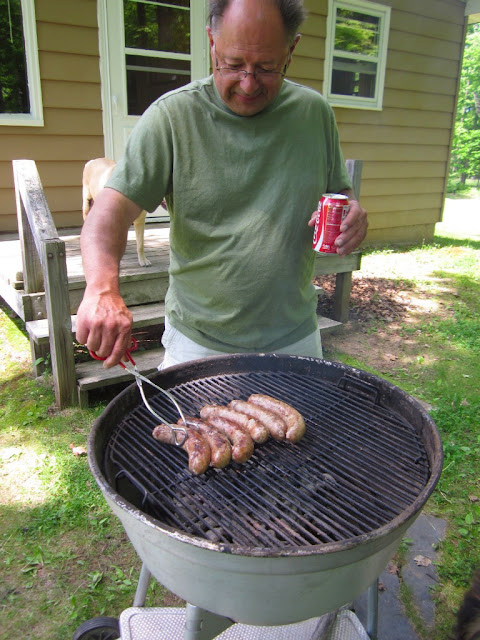 Long before we wanted to, it was time to start loading up and heading out again.  Towards home.  The weekend is over and it's time get back to the work-a-day world.
We noticed on the ride that our front shocks (replaced only 12 months ago) are not operating properly.  We are going to have to take out the Bilstein shocks and check out which one is bad and have it replaced (they are under warrenty) before we take it out again on the road we think.  Sigh.
.
Posted by KarenInTheWoods at 5:44 PM