First up--- motorhome repairs and modifications:

On my last blog, I showed a few pics of the broken top part of the frame where our shocks mount in the front of our motorhome.  The location of the broken part on the motorhome was right next to the diesel tank, so welding it in place was not a good option.

Steve was able to remove both broken pieces now with the help of some WD-40.   Yes, fellow RVer Jim mentioned PBBlaster.. it's GREAT stuff, but we didn't have any on hand.  Have to add that to the shopping list to Fleet Farm this weekend I guess!

Anyhow, he was able to get both parts off so he could weld up the break and also reinforce it with some triangular gussets.   Here are the pics of the finished piece and he even painted it up with rust protection paint.  He looked close at the same mount on the passenger side, and it appears as if it has already been reinforced, perhaps by the previous owner?

Here is Steve's lovely weld job and the two new triangles for reinforcement: 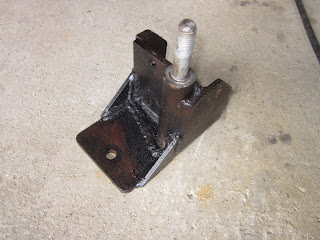 So the rig will be ready to roll safely for Steve's upcoming Father/Son fishing trip next weekend.
He and his brothers take his dad each year for an extended weekend fishing up north.
Second----  His next project up on deck is the new water pump and accumulator pressure tank to install on the motorhome.   I know I posted pics of this before, but now he is starting to work on it!   He bought a fancy schmancy heavy duty marine water pump called a PAR from Jabsco.  He is figuring out a mounting process with the new accumulator tank to make it removable for winterization.
So instead of mounting it permanently to the frame underneath, he mounted it in a removable 5 gallon bucket!   He cut access holes in each side of the bucket for the line IN and line OUT.  Now it won't tip over, and does not get mounted permenantly either.  When it comes time to winterize, he can simply remove the tank and screw the two lines together with an adapter piece of pipe fitting. 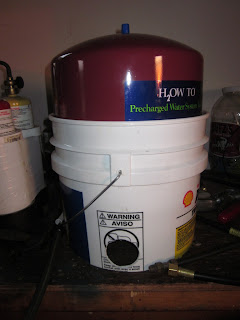 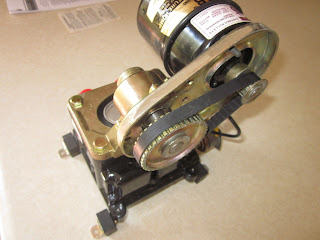 The new water pump will replace the old one, which still works just fine.  You know guys... the "bigger is better" theory.  The old pump will remain with the rig and be used to pump in water in emergency methods from a bucket or bladder if we are boondocking and don't want to move to refill the water tank.

So that is about it for now on the motorhome repairs....

On to springtime!  Our house is located in the far northern area of Wisconsin where Spring is finally arriving.  It is finally past the frost warnings of last week, and safe now for outdoor planting.   Yesterday I stopped at the little greenhouse called The Garden Spot near our home and stocked up on flowers and tomato plants.

I put in 8 tomato plants (4 Beefsteak, 4 Early Girl)  in pots on the deck.  I usually plant them along the back side of the garage.  Since we ground the varnish off the garage logs 2 years ago, the dirt over there seems contaminated and won't grow them nice anymore.  Last year's plants were a complete flop!  We were going to dig up that dirt and replace it with new garden soil, but never got that far yet.  I think pots are good as I can move them around now. 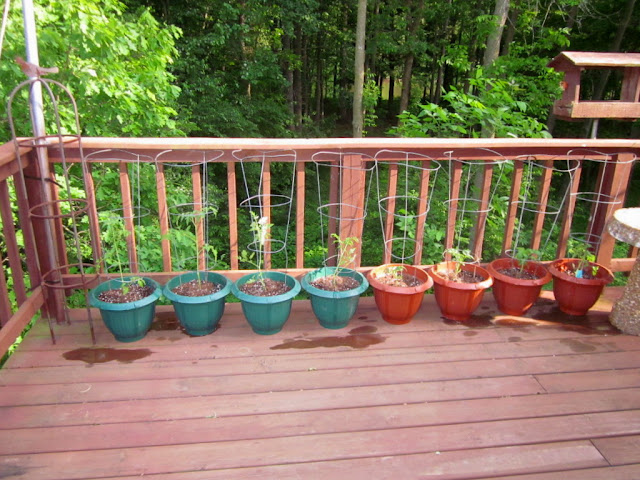 I can almost taste the home grown 'maters right now!!!
The four hanging bags are looking a bit skimpy as they are planted with petunias with big thick ruffled blooms, but they will fill in fast and be full, lush and lovely hanging on all four corners of the gazebo.

(the fabric cover is off  the gazebo frame during this pic,
we only put it on when we are sitting out there in the sun) 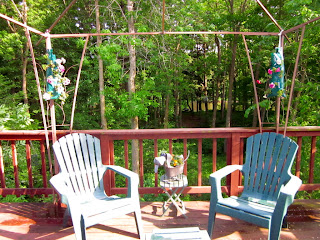 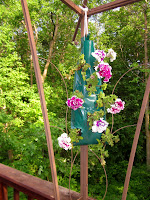 I won a geranium as a door prize last month at an HCE meeting... so I added some red spikes and dusty miller to the pot by the garage door.   On the side deck, I added a planter with pink and blue wishbone flowers. They will soon be cascading over the edges and be a lovely greeting at the doorway to the house. 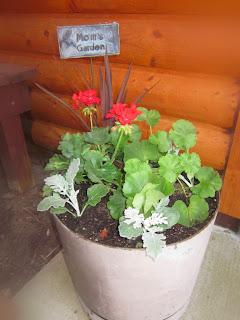 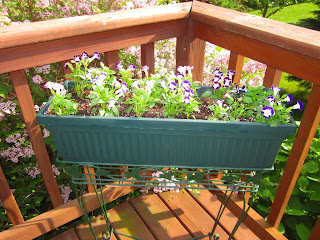 The white lilacs on the corner of the garage are in full bloom.. and the Japanese lilac bush by the side door is just sooo fragrant and thick with blossoms!   These blooms last for weeks on end, much longer than the traditional lilacs we have along the east border of the yard.  That Japanese lilac bush was a housewarming present from Steve's brother, Pete, way back when we built the house. 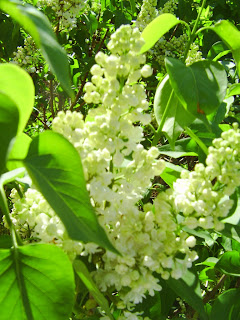 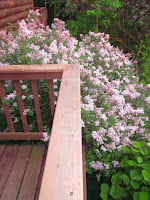 My bleeding hearts on the east side of the house are just huge in their glory.
Little granddaughter Allegra gave me this yellow begonia for Mother's Day,
and I planted it in the doggie planter for out on the deck.
The grandkids love that doggie, you pat it's head or tail and
it's are on springs so they BOUNCE up and down! 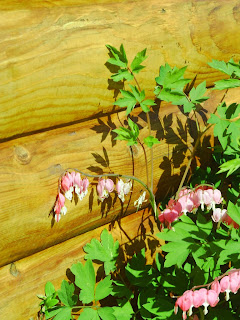 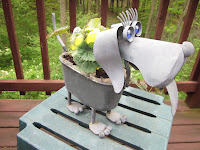 I have my favorite coleus growing in between clumps of hostas along the sidewalk by the garage.
This strain I have kept going from cuttings and plantings for many years, wintering them indoors,
all started by a cutting I got from my friend, Connie, from her house wayyy back in Green Bay 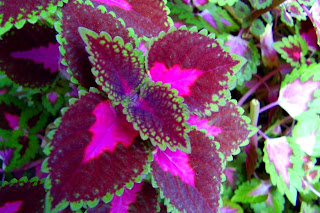 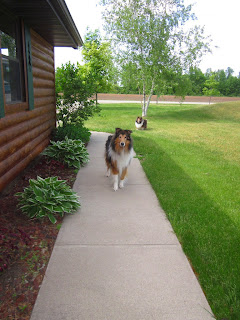 Our next door neighbors just got a new lawn tractor, and Mike had to grab Amber for a little ride around the yard... how cute is that? 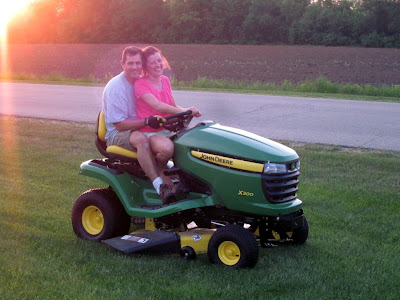 Notice the field in the background has only recently been plowed by the farmer down the road.  With all the rain we had this spring, the farmers have not been able to get in the fields till this week.  No "knee high by fourth of July" for that cornfield, that is for sure.  I think he just planted it yesterday.


So spring is in the air... and although we had a few days of sweltering weather, we are back to normal springtime temps again.  Today is rainy and only 48 degrees.   The humidity is at 87%   Ewwwwwww

This weekend is the local Copperfest Celebration in Oconto.   Heather is bringing up grandson Jameson in time for the parade, and we will grill out and hang there for the day. Grandkids Chelsea and Jameson will love the parade and get lots of candy they throw.  Allegra isn't able to come this year, she is going to the Bay Beach Animal Sanctuary tomorrow instead.  We will miss her smiling face!


I took this excerpt about Copperfest from the Chamber of Commerce website:
Oconto has a rich historical past, mainly because of its location along the west shore of the waters of Green Bay.
Approximately 5000 years ago an archaic people, later called the Copper Culture, hunted, fished, and buried their dead on the banks of the Oconto River near the bay. The French Canadians came here in the 1600's to trade for the fur of beaver, muskrat and fox, canoeing by way of Mackinac and down the bay.
Early settlers arrived by steam powered boats traveling on the Great Lakes. Of those, a Norwegian community grew on the bay shore and began fishing commercially, sending barrels of salted herring, whitefish, and trout to eastern markets.
Beginning in the 1850's lumbering was the primary focus. Logs were floated down the Oconto River where they were sawed into lumber at one of seven mills in Oconto and shipped out by boat to large growing cities on Lake Michigan.
Today we tend to rely on highway vehicles to carry passengers and cargo. The rivers, lakes, and bay fulfill the recreational needs of fishing boats, canoes, pontoons, kayaks, sail and pleasure boats. We still hunt, fish, snowshoe and ski just as people did long ago.
The city of Oconto has thirty-three structures on the National Register of Historic Places. A visitor can take a self-guided tour of the city, walk the Historic West Main Street District, and in the summer tour the 1890's home of wealthy George Beyer located on Park Avenue.
Sooooo any excuse for a celebration, the whole town gets into Party Mode and has a great time!  In town, there is always a lot going on:
Featured Events are Amateur Lumberjack Competition, Truck Pulls, Adult Horseshoe Tournament, Mens, Womens and Youth Flag Football Tournament. Hamburger Eating and Pie Eating Contests.  Regional Wrist Wrestling Competition.  Pie and Ice Cream Social.  Fireworks.  Childrens Inflatables games, Trout Pond, Street Market. Poker Paddle Run, Duck Races and more.  Entertainment featuring Kenny Ahern, T. Texas Terry, Randy Petersen, Mr. Billy, Jay Merline.  Music performed by Ravyn, Vic Ferrari, Gringos, Rivertown, Sonic Circus, Rocker, Midpoint and Aaron Socha
For more information on the Copper Culture People:
Copper Culture State Park, Oconto, Wisconsin

Steve is entering the horseshoe tournament at 1pm.  Later there are street dances, fireworks and probably babysitting for me and Granfaddah so the parents can go out on the town?  Sounds like a good weekend to me!

Posted by KarenInTheWoods at 1:27 PM