This past weekend, our little town of Oconto had a fun festival called Copperfest.  The many events were full of family fun, with a parade, contests, live music, games, rides and a multitude of happenings.

We went into town to watch the parade, joining up with the grandkids near Erin and Mark's house, just one block off Main Street.   Heather brought Jameson (Jesse had to work)  but we were missing Dan and Heather and Allegra as they had other plans for the day.    We loaded Chelsea and Jameson into the strollers.... 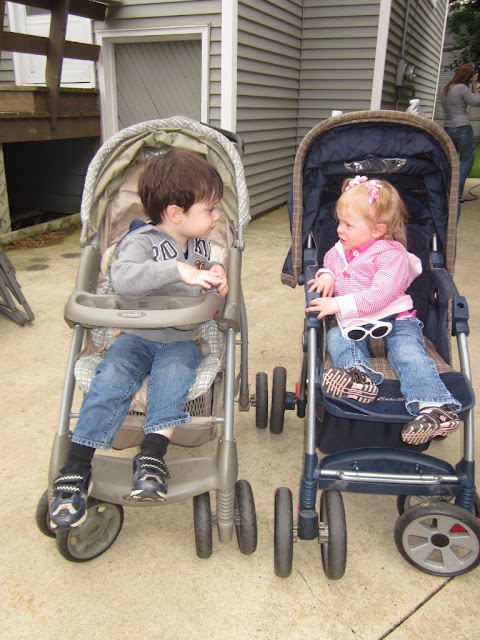 The parade was wonderful with lots of candy being thrown, and the kids all sat out on the brightly woven blankets we brought them back from Mexico last winter.  So glad to see them being used in the manner they were intended for--- picnics, parades and in the car for emergency use! 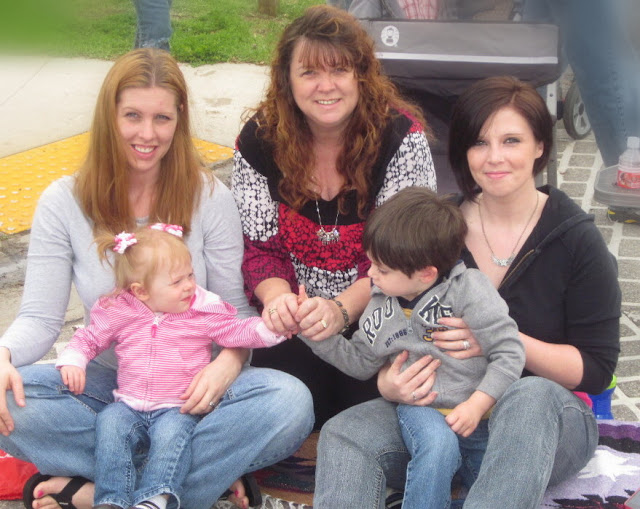 All the fun stuff like fire engines, candy, clowns and horses...
Chelsea was so excited to see a marching band and loud music 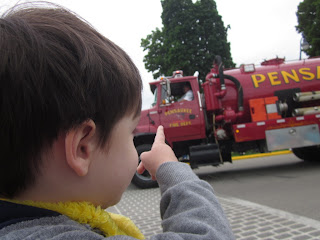 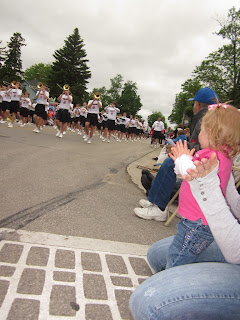 After an hour, the parade was done,
and we walked back to Erin and Mark's house for a cookout.
This photo Heather took brings joy to my heart--- 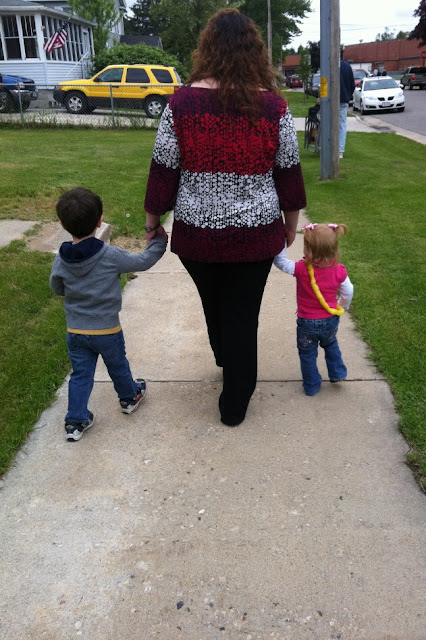 Steve had entered the local horseshoe contest with a co-worker, Bill.  They threw quite a few games while we wandered the grounds, listening to the bands and enjoying some funnel cakes, cheesecake on a stick and other delectable delights. 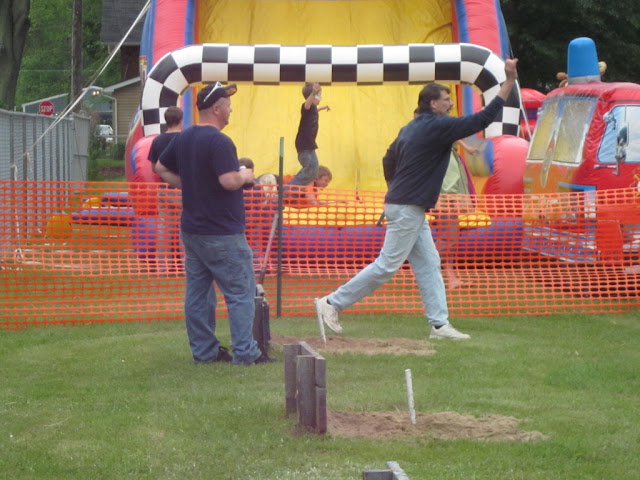 We shopped the vendors of junk, Heather bought some beaded jewelry, Erin found a cute sundress, and I bought magic markers and paint brushes.  The grandkids watched a comedy act while sitting on some bleachers. 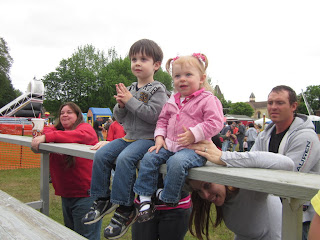 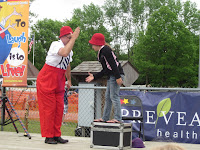 At one point, Jameson reached over and impulsively hugged his little cousin, and I happened to have the camera ready!  How cute is that? 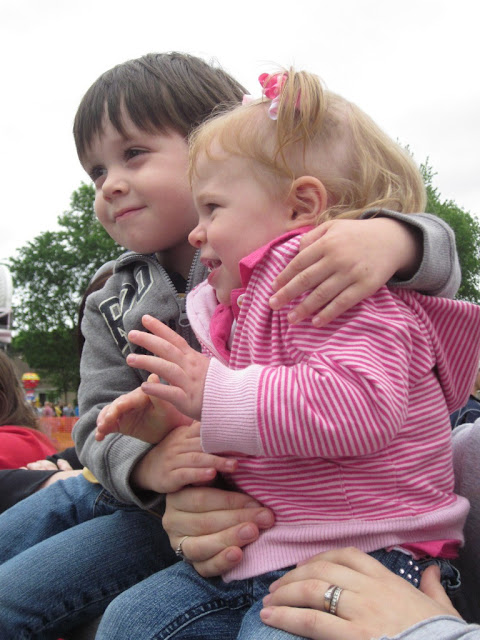 Later on in the evening, we took the grandkiddos back to our house for an overnight, letting the parents do their band listening and drinking and partying all within walking distance back to their house.  We are getting too old for that, so we opted to be the babysitters instead.  LOL
The grandkids zonked out quickly after all that fresh air, excitement and festivities.   We had a lovely morning with monkeys jumping on our bed and having an all around Good Grandchild Snuggle! 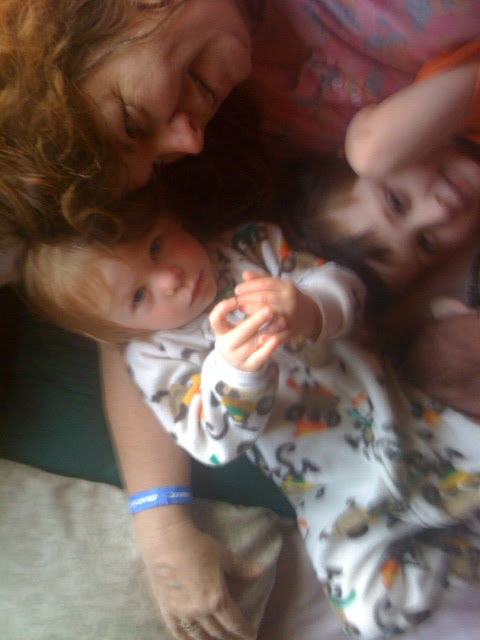 (not a very good quality shot with a cell phone camera, but you get the idea....)
After returning the grandkids to their parents on Sunday, it was time to start clearing out my things from the motorhome.  I felt like I was MOVING!   I was clearing out all my "girlie things" to make room for more "guy things" .  Out went the knitting baskets, the spinning wheel,  the basket of curling irons, hair spray, jewelry box and silky bathrobe hanging on the hook.

Steveio will be using the motorhome for his annual Father/Son fishing trip this week.  They will be gone Thursday through Sunday and use our motorhome to travel, cook, play cards and maybe do a little fishing?   His dad and two brothers come along to do this every year as a Father's Day present to their father.  We then loaded the motorhome up with groceries and fishing gear, and Pete is bringing the beer and the boat.

I will have four days of weaving, spinning, knitting and maybe a gal pal coming up from Tennessee if all works out in the planning.   Then next week, some RV friends from St. Louis are coming up to spend time in our driveway to tour the Green Bay area, and later in the week we will all go camping together somewhere further north!

See..... Steveio has wanted this thing called an "Extend-a-Stay" device for our motorhome. It enables you to add an extra propane tank if your main big built-in tank on a motorhome is running down.  If you are staying in one spot, you don't have to move the whole motorhome to go fill the tank up.  You can use an external tank to extend your stay. Thus the name...

It runs in the $80-90 range
But I saw one on Ebay, new in the box. Seems that the seller erroneously bought it thinking it was the "Extend-a-Flow" for travel trailers, so it didn't work for his purpose and he was selling it.    I bid on it 20 minutes before the auction ended for $18.  I was the top bidder.  I was doing this bidding from my laptop down in the loom room.
Little did I know, but Steve was on HIS laptop up in the livingroom.  He also saw it on Ebay and logged in under my account (he doesn't have one and usually logs in as GUEST)  and he places a bid on it too!!!!  Luckily, Ebay doesn't up the bid when you are already the highest bidder...   he didn't even realize that I was ALREADY bidding on it!   LOL
And I had NO idea he was even on the computer, much less on Ebay, much less using MY account instead of GUEST.  He has never, ever bid on Ebay before and this was his very first time, and he was using MY account to boot!  (Nor does he have a Paypal account to pay for it?)
Ten minutes before the auction is up, I try to check on my status while down on my laptop in the loom room.  Strangely,  Ebay won't let me in......   (I didn't know it was because he was logged in upstairs)  and I fiddled and fiddled with Ebay and could not get logged in...    But then in 5 more minutes I get an email from Ebay in my inbox saying I won the auction for $18.    Good... nobody outbid me.  Wheeeee
I come upstairs and Steveio says to me:   "Guess what?  I just won an Extend-a-Stay on Ebay just now for $18!!!"
ARRGGGHHHHHHHHHHH!!!!
So I had to explain that no, he didn't win it.
I did.
And it was supposed to be saved for his Father's Day Present!
And~~~~ he got a lecture about buying something on Ebay using my account
without even knowing if I had enough money in my Paypal account to even pay for it.
I guess it's time to change my Ebay password, huh?
Posted by KarenInTheWoods at 7:31 AM