Tree is done- a Shrimp Graduation- and let the Holidays Begin!

In my last blog, I left off where the tree was up and we were getting a huge storm.  Yes, it hit and left us with huge drifts of about 4 ft across the driveway, of course.  Steveio had to work at shaving it away sideways, a narrow slice at a time with the snowblower.  The drift was higher than the snowblower---    here he is, amidst the swirling blowing snow as the gusts were reaching 50+mph.  But if you don't get the drifts out of the driveway several times during the storm, once the temps drop as predicted, it will be hard as a rock and stuck like that for the rest of the winter! 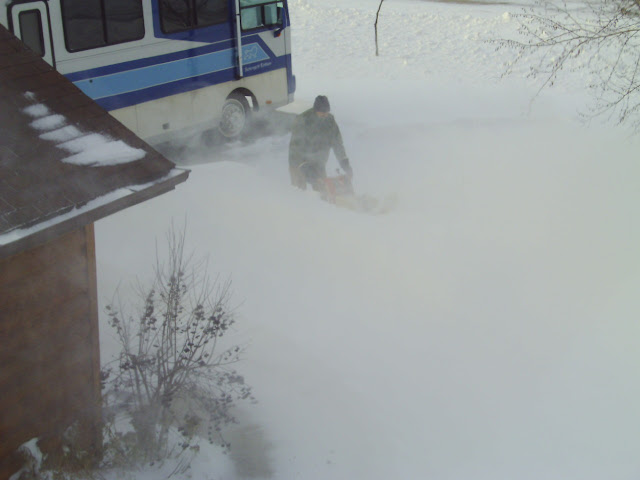 The most important part is getting the area in front of the motorhome snowblown away,
so we can make an escape in February!  LOL
During the Packer game on Sunday (which they LOST!~)  I was able to get the tree decorated.  Now... what you would expect from a sock knitter???  YES!   It's a SOCK TREE!~ 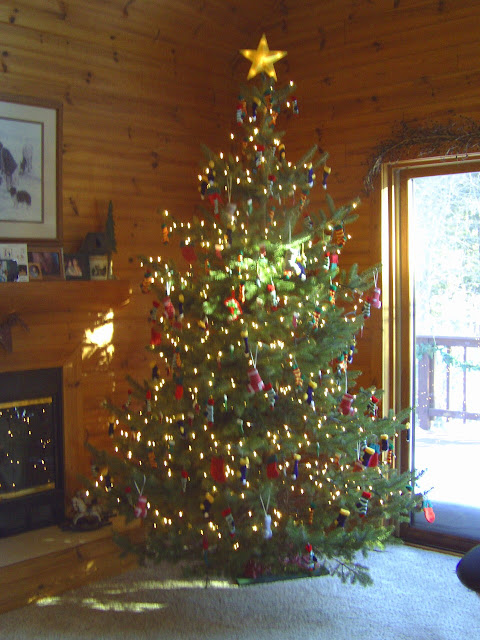 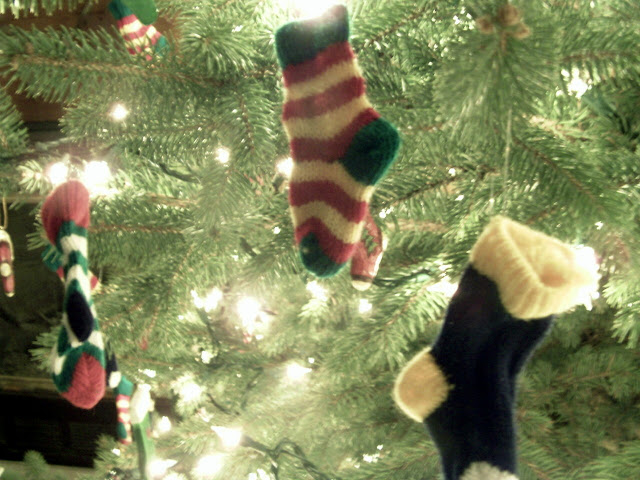 Now to get to the cookie-baking and finish the present-wrapping... then I am free to enjoy the holidays!

On Monday, we had a special invitation to attend the Grandparent's Day at the YMCA in Green Bay. Our one year old granddaughter, Allegra, was GRADUATING!   Yes, from "Shrimp" to "Perch" in her swimming classes.   How adorable is that?   What a fun place to go in the middle of a frozen winter! 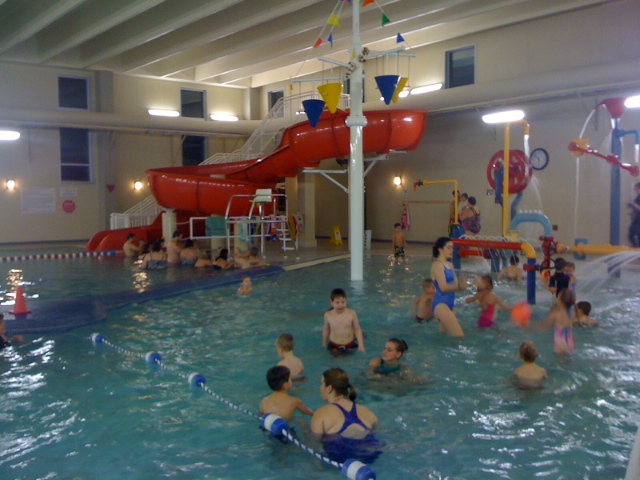 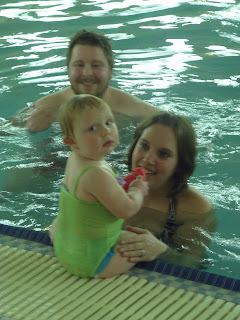 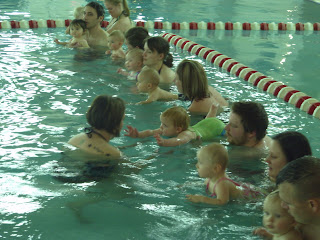 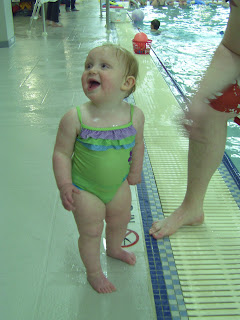 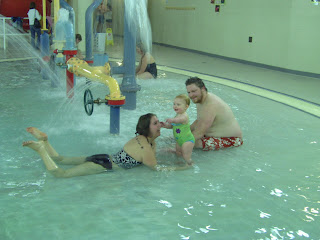 At the end of the class, the parents are allowed to take their child down the swirly waterslide as a reward.  Allegra had a blast and she sure didn't want to come out of the swimming area, as can be seen in the photo below: 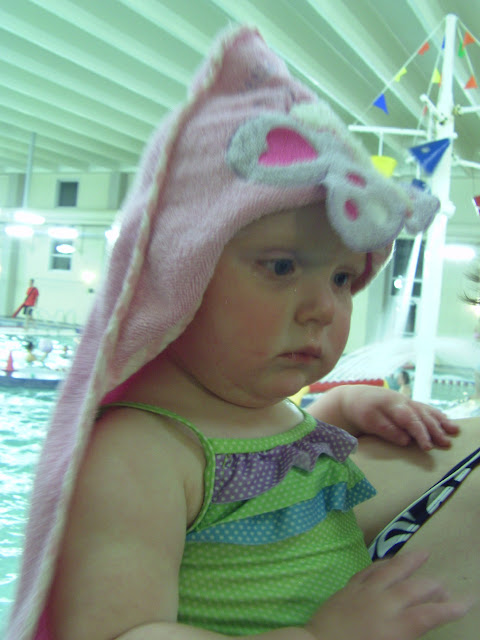 Tuesday night we had Steve's union holiday party/meeting to attend in Green Bay.  Besides work as a locksmith for the University in Green Bay, Steve is the president of the union for state employees.  He handles all the state workers for Northeast Wisconsin, including the universities, prison guards corrections, transportation etc.  Not the teachers, just the hardworking poorest laborers and lowest paid staff people. He works very hard for very little pay as President.  But everyone loves the job he does and nobody runs against him, so each year he ends up in another term.  It's a lot of hassle, but important.  Our new governor elect is mouthing off about abolishing all state employee unions when he gets into office.  What then?  Who would protect the mere workers from the crazy off the wall situations that seem to occur more and more often from management?  As budget cuts stress the situations even worse, the employees need protection more now than ever.  Many, including Steve, haven't gotten raises in years and it's been a year and a half that they have been working without a contract.  So it's not so much the wages issue, it's the protection they need from mismanagement.   Ok ... Off the soapbox.

For the annual party, we went to a historic place in Green Bay called Titletown Brewery company.  It was built in the old train depot just a few blocks from my old home in Green Bay.  It was vacant for a few years and became a target for vandals.  In 1996 they bought it and fixed it up into a nice restaurant and brewery. 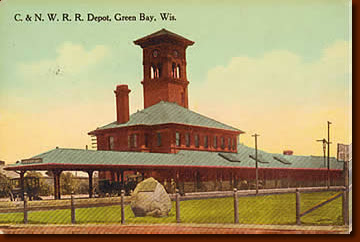 http://www.titletownbrewing.com/
The food was okay, the meeting was informative, and we had a nice night out.   The building was full of fun historical memorabilia and was an interesting place for them to hold their meeting.

We drove past my old house a few blocks away to take a gander.  Wow.. the little pine tree I planted is now huge and higher than the rooftop.  The trees in the backyard are amazingly tall too. I remember planting them as skinny 8 foot tall sticks.  LOL  I bought it in 1985 and sold it in 1997. The house is the same otherwise, and even peeking in the lit windows from the dark street, I could see the same curtains as I left in there 13 years ago when I sold it!  It was too dark to take a photo, so here is a photo from my own files taken another time. 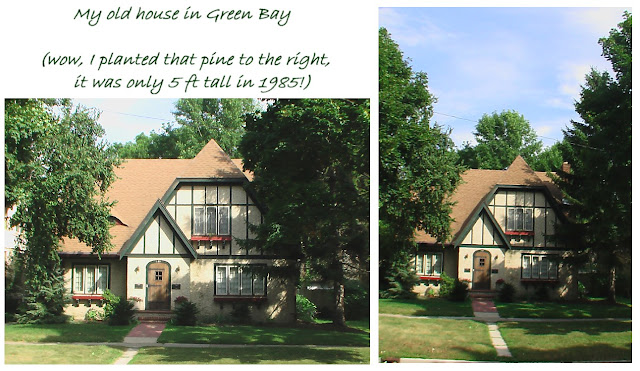 That was a pretty cool house when I owned it.   English Tudor style inside and out, with Old World craftsmanship.  It has hardwood floors, some arched top palladian french doors, huge fireplace with built in curio cabinets on each side, formal dining etc. with crown mouldings and high mopboard trim.  The front windows all opened like little french doors into the room.  It was so charming!   They don't make em like that any more. This one was built in 1926. Sure was a cute house and we enjoyed living there.  But it was smack dab in the middle of Green Bay, in a declining neighborhood.  We were smart to sell when we did and get out when we did.
On the topic of RVing...  we are scheming and planning to take off from here about mid-February and heading south towards Texas and west towards Arizona and California to wander around.  If any of our RVing buddies know of the best routes to take from Wisconsin at that time of the year, chime in and let us know.  Also any cool stuff that are "stop and must-see" places for us?
Steveio just replaced the one section of tailpipe that wasn't replaced when he did the rest of the exhaust last spring.   It was too cold to go out and take a picture, so take my word for it.  He did it.   Now the oil, filters, chassis lube and hub levels are all changed, checked, updated and ready to roll for an extended trip.   Now to get through Christmas, New Years, and property taxes and income tax filing before we can afford to go!
We are touring a day care center tomorrow to check it out for little granddaughter Chelsea.  Right now I care for her Mon-Fri full time in my home.  She will slowly transition going there part time until we leave for our trip, and then it will be full time there while we are gone.  It will be hard to let her go, but she needs socialization and learning and sharing and playing with other toddlers.
All of my rug, towel and sock orders are done and out for the season (barring any last minute orders from repeat customers)   We shipped out the last box last night and I can breathe a sigh of relief.
Going to start some cookie baking next, I think.....
Posted by KarenInTheWoods at 10:36 AM