It's the busy time of the year for me, to crank out socks and weaving up rugs and packing and shipping them out.  Seems every day I am taking more custom orders.  That is fine with me, because I am setting aside funds for vacation time in Feb and March.  Wheeeeee


Our darling little granddaughter, Allegra, turned ONE YEAR OLD!  On Saturday, her parents threw a party in their home, and we were all able to make it.  Even Steve's mom and dad came all of the way from Waupaca for our little darling's party.   She was on her best behavior and such a darling to everyone.

The theme was mexican nacho bar for the meal, and I brought a crock pot of chili con queso dip and some chips.  They had all the fixens, and of course, home baked cupcakes and ice cream!   Of which the birthday girl really enjoyed herself.. .teee heeee  I was video taping the singing  and candle, but was able to snap a few shots as she enjoyed her cake. 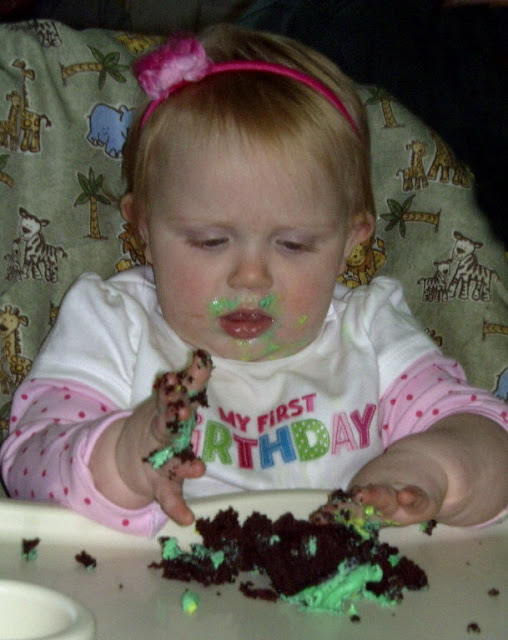 She got to open up a pile of presents,
and you could see how she wanted to play with each and every one..
She will also be the best dressed kid on the block
with all of the adorable clothes she unwrapped. 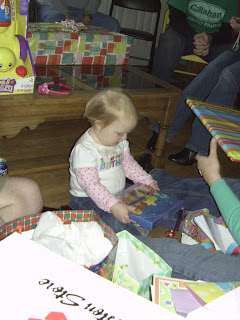 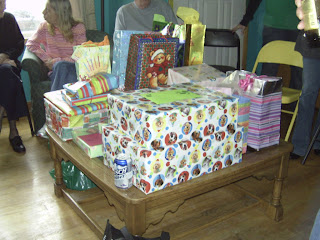 But one of her favorite presents was a can of black olives!!!  Yes, she LOVES black olives!
Jameson was teaching her the letters on the play mat for her playroom. 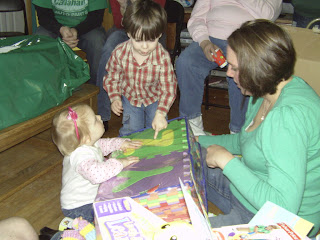 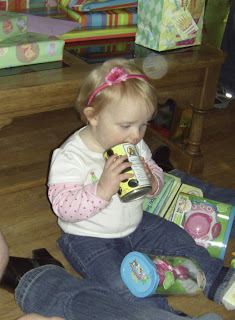 I got in some cuddle time with each grandchild, but I shared them with the other grandmas, too.
It was a very nice party and we were so glad to be part of our grandchildren's lives.  In a few years when we hit the road full time in the motorhome, we won't be able to make it to all of their parties.  So we will enjoy these early years.  After they get bigger, it will probably be those crazy riotous noisy kids parties at ChuckECheez or the like.  We can bow out on those.  LOL

Then  on Sunday... Steve had a treat for me....  Steveio bought me an early Christmas present.  Two tickets to see Mannheim Steamroller in concert at the Weidner Center in Green Bay.  Because the concert was on Sunday Dec 5, he had to give the tickets early instead of on Christmas Day.  But that was okay, it was still a surprise to me!

So we got gussied up... Steve in his suit and I in a nice dress and we went to enjoy an evening of holiday music.  It was blasting cold winds and subzero windchills, and being in a dress and heels is quite unnatural attire in this kind of weather.  But I was treated with dropping me off at entrance while he parked the car.  Whew!

We started out with cocktails in the reception/lobby area and admired some of the artwork on display.  This light fixture was pretty strange.... It was all twisted tubes of colored glass, reminding me of twisted balloons of some gigantic clown project.  It was about 10-15 feet long and suspending from the ceiling.  I had to sneak a pic of it with my Iphone.    The colors that you see at the top are throughout, just the light was hard to get a picture of from that angle.   Really strange, huh?  All in the name of *Art*??? 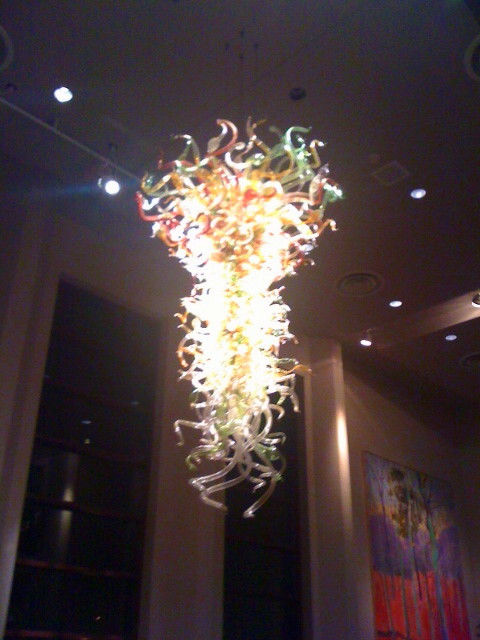 At the same time Steve snapped a pic of me in front of a tree, then another couple offered to snap a pic of the two of us together. Awwwwww  how sweet of them!  I know they are blurry, but you get the gist of it. I was very proud to be on the arm of my dapper dandy do hubby---- 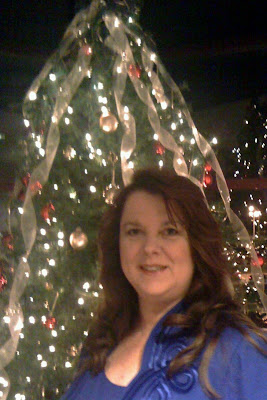 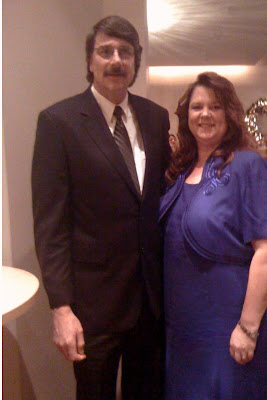 The concert began soon after we were ushered to our seats.   It was so pleasant to be there with my loving man, enjoying some good music in a live performance.  We don't get to go to these things to often, so it was a real treat for me.  Our days of the kids school concerts are long over, and we do enjoy live entertainment when we can attend.

Mannheim Steamroller's name is derived from the city where Mozart composed his music, Mannhiem, Germany.   The Steamroller portion comes from the name of the crescendo portion in musical scores, nicknamed the Steamroller.

Some tunes are more traditional, some rock-ified, some celtic, some jazzy.  A mix of orchestra, rock band instruments, two grand pianos and even a tiny toy piano made up the band.  All very interesting and really enjoyable.   The music was great, and the light show was enhancing.  But the big screen video in the back ground was distracting somewhat and took away from the effect of the music. Many times I just closed my eyes to the lights and let myself enjoy the tunes.


But one thing was noticed.... a dad and mom, presumably the parents, came in the seats directly behind us with four kids:  2 teen girls, a pre-teen girl and a young boy about 8 or 9.  The kids obviously did NOT want to be there.  Why their parents shelled out $66.00 a ticket for each of them was beyond me.  That was almost a $400.00 outing for the family.

The two girls chattered throughout the first 8 songs, the boy kept kicking my seat, rustling under his noisy nylon jacket as he huddled underneath with a cell phone playing games on it.  He even let the ring tone get away a couple times and someone else from behind them hushed him and told him to turn it off.  He was making noises and complaining and making disparging remarks in general about the concert, his sisters and not wanting to be there.  Then he was clapping applause in the middle of songs and distracting everyone around him.  And his sister next to him was louder than he was each time she would tell him to *knock it off*.   The woman, presumably the mom, was oblivious to it and didn't do a thing.  I turned around a couple times with an irritated look, which he just grinned snottily in return.  I then looked at the mom and raised my eyebrows and she just looked away. The father was way at the other end of their row of seats so I could not make eye contact with him.   Seems the pre-teen girl was the only one embarrassed by his bad behavior.

At intermission, they all went to the lobby.  When they filed back in to their seats as the lights were dimming, they were all quiet and chastised and silent.  The father had a stern look on his face and that was the end of the distractions!  Perhaps an usher had spoken to them.   LOL ... Later, Steve suggested the woman might have been a step-mom or a girlfriend with no authority to discipline the kids?  Who knows, but at least we got to enjoy the rest of the concert in peace!


Come to think of it, the four folks ahead of us were also visibly irritated by this family and they did NOT return to their seats after intermission. Perhaps they complained and were given other seats in another area of the concert hall?

As we got my coat from the coat check (fake fur, not real)  Steve said he didn't park ***too*** far away and it would be faster than trying to get back up near the building where the valets were bringing up cars.  So we should WALK to the car.  After all, I had on a *fur coat* right?   ahem?  What about the bottom half of me?  Walking in heels, pantyhose and thin dress is essentially walking like I was bare naked!   LOL   I tootled along as fast as I could manage on my heels, as we were buffeted by the winds coming right in off the icy waters of the Green Bay! .... the car was parked a lot farther away than I think he realized, but we made it, with the danger of frostbitten toes and other parts of my anatomy!!!!!!

Winter in Wisconsin, ya gotta love it.

Posted by KarenInTheWoods at 7:29 PM