Yes, it's Saturday morning and we are waking up to rain...  It was damp and icky outside, but we were warm and cozy in the rig.  The dogs didn't even want to go out!

We turned on the tv for a little bit and mourned with the rest of the country about the happenings 9 years ago.  We too remember where we were and what we were doing when we heard the news.  It strikes a chord in every American's heart to hear that we were not safe in our own country, and monsters had attacked us.

We perked up a pot of coffee and decided that perhaps we would take Paula's suggestion--- Rummage Sales!~

The town of Merrill was having City Wide Rummage Sale day.... so we went into town, with three goals,

one to get some rummaging done
two was to find a farmer's market for some fresh produce
and
three (this is unusual for us) to go out for breakfast!
So off we went... the only treasures we found were some cool toys for the grandkids, a few interesting shirts for me, a set of nice deep metal mixing bowls and a boot tray to put in the motorhome by the door for our shoes to go on.   That was about it!   No big bargains, no super dooper finds.

We found a tiny farmer's market with about 8 booths.  I spread out my purchases to get something from each booth, although almost everyone had the same things!   A bunch of carrots here, a zuchinni there, a clump of green onions here and a sack of apples there.  Added in some cucumbers, tomatoes, yellow squash, and last but not least a container of raspberries again!  Yummmm for ice cream later.

We asked for directions to the best place for breakfast and were directed to Champs....  the town of Merrill is all torn up with road construction on the main artery through town, so getting around was difficult.  The town is built on both sides of a river, with only a few bridges to span the river. Some of the bridges are closed due to the construction, and some are detours.  It was confusing, but we finally found the place.  The parking lot was still full at 1030 am so we are told that means it's *good food*.

We found a table, and ordered and ate.  I am not a fan of eating out but we did.  I asked for crisp bacon so I don't get the mushy soggy fatty kind, but what I got was burned stiff hard boards, more black than brown strips that crumbled into tasteless chips when bitten. I ate part of one and left the rest on my plate. My scrambled eggs were like little rolled long chunks of all yellow doughy lumps that looked like worms and kinda greasy.. not a pile of light fluffy mixed whites and yolks as I make them.  The toast was soggy and cold, and mushed down flat and thin from spreading on the butter and even the crusts were not crisp.  At least the hashbrowns weren't too bad. LOL   See why I don't care to go out to eat?

Oh well, we left town and headed back to the campground.  As we drove in past the other Safari we had watched arrive last night, they were outside and waved to us.  So we stopped to chat. 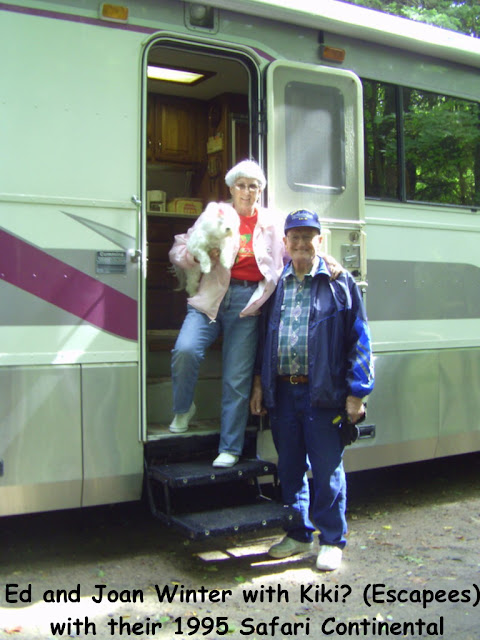 Sorry, I can not remember if the doggie was KiKi or KoKo...
either way, she was cute and cuddly and just drop dead adorable!
They have a lovely motorhome with the back mural of an eagle swooping down.... 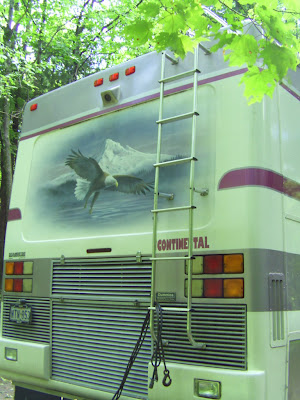 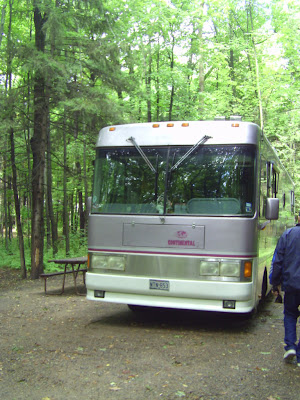 WOW what a couple!  They were a HOOT!   They invited us right in for a tour and yakked about their Safari motorhome with us, showing us all of their improvements and modifications.  They had made alterations to some of their cabinetry, tore out the washer/dryer that was located under their cooktop and installed a complete stove and oven.  They adapted light switches and added more 12 volt lights for boondocking.  Their bathroom had 2 entry points, of which they had one blocked off and added more cabinets too.  They utilize their space well and really have a comfy neat organized home on wheels.

They are full time RVers based out of Livingston, TX and have been on the road now for 12 years.  We sure enjoyed chatting with them, and they piled us up with information about Escapees, Branson and Good Sam.  We exchanged *cards* with each other's information, in case we run across each other again down the road.

(many RVers have printed  business cards with their names, email, membership numbers and cell phone, usually with a photo of themselves and their rig--- to pass out to people they meet.  I am keeping a file of all the ones we have collected so far of folks from far and wide)

Here in this pic, Joan was telling the guys some details about Branson and I ran around snapping pics of their rig as they were getting ready to head on out. 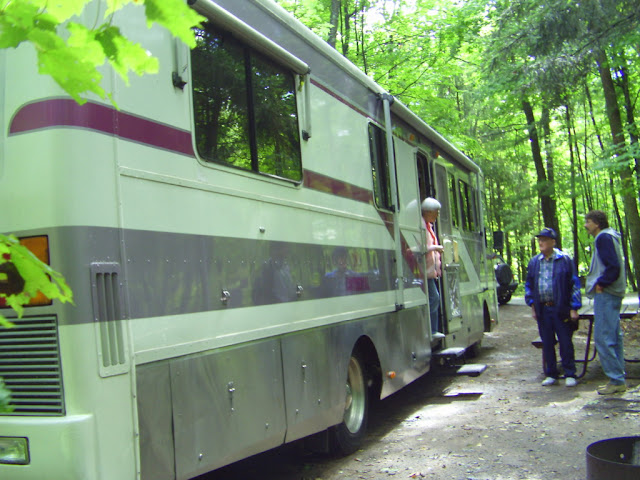 And here is Ed, doing the last of the outside chores before Joan pulls it out (she drives)
and he hooks up the pickup truck they tow behind as a toad. 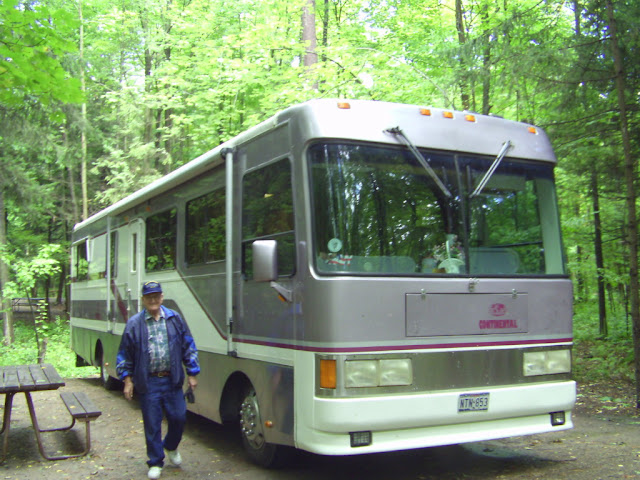 What a fun couple, and we hope to meet up with them again on the road sometime soon!

We went back to our rig and I started simmering up some of those good farmer's market veggies into soup!  Used the pressure cooker so it was done fast and tender, and we ate good homemade soup to make up for our lousy restaurant breakfast!  We laid around till after 3pm hoping the weather would brighten up, delaying our departure.  Hoping if it were nicer, we might stay there another day.   As we finally gave up and started to get ready for the road, a bit of sunshine was coming along!   I wanted to stay!  Steve said "Naw, let's go".

We had 2 more campgrounds picked out that were east of us, both of which we had been to in the past.  As we drove east, we were just on the edge of the rain clouds... and just behind us was the sunshine!   Steve kept driving east.... arggghhhhh

I wanted ONE MORE NIGHT of camping, but he said we are less than 100 miles from home, let's just go home since it's raining.  I said if we wait another half hour it will be sunny at any campground we stop at!

Nope, he said let's keep going.  His reason?  He smiled and said we are both on our last pairs of underwear!!!!!    (honestly, he just wanted to be home in time to watch the Packer Game on Sunday)

I pouted as we drove past each campground I had earmarked for a stop... I even tried to get him to stop at a third one we had also been to.  He said nope, we had already been to those, so let's just go home. ARRGGHHH

We stopped for fuel in Oconto Falls, where he saw diesel at 10 cents cheaper than anywhere else.  So what does he do?  Instead of going around the station and coming in from the other side, he

SSSQQQUUUEEEZZZEEEESSSSS
between the pumps and the fence!!!!
Just look at this!!!!!
Duh, do you think he is a bit close??? 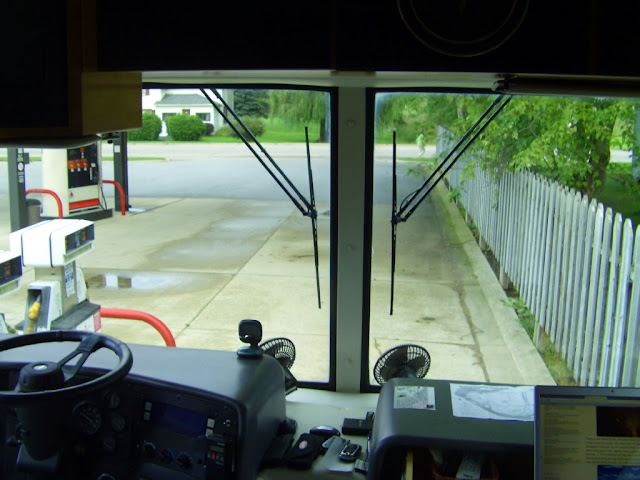 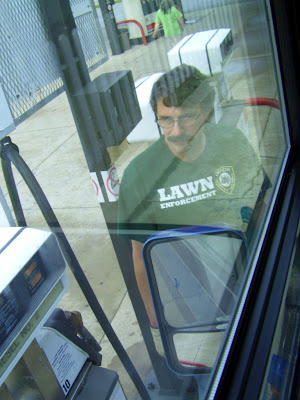 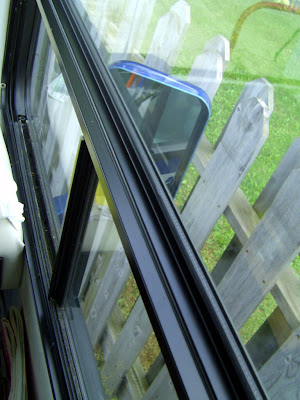 I kept telling him he was never gonna get outta there, and we should unhook the toad and back out before he got us penned in tight!   He just grinned... I think he was enjoying this!

Look at that tree overhanging the fence in the background! We have to go along the whole length of fence to clear the pumps before he can even turn away from the fence========  ARRGGGHHHHHHHHH 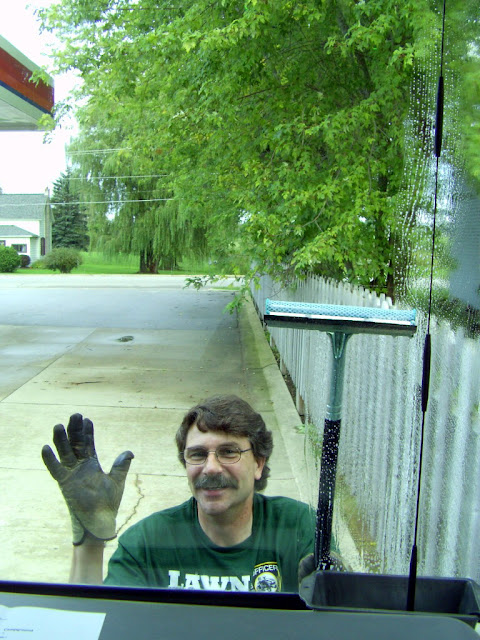 The goofball did it, I don't know how.
I kept my eyes closed.
We drove the last 10 miles to home.  The sunlight was behind us to the west. 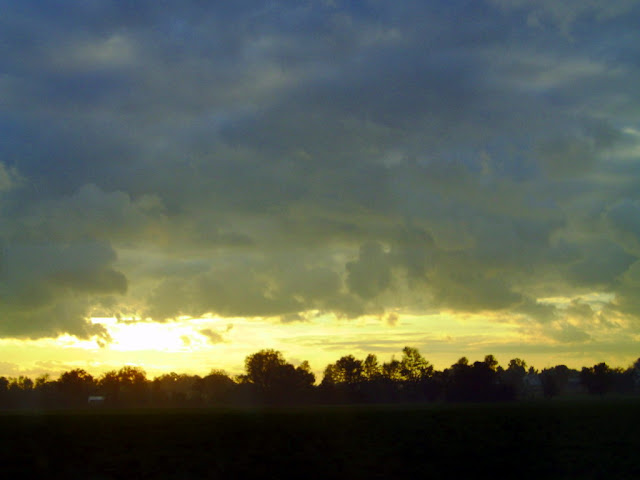 And ahead of us was this yucky cloudy icky weather.... over our house! 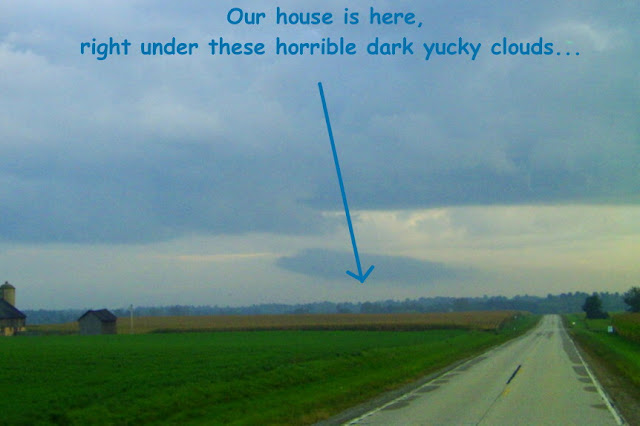 Yes, we finally pulled up in front of the house, home again.  The sun was breaking through the clouds... 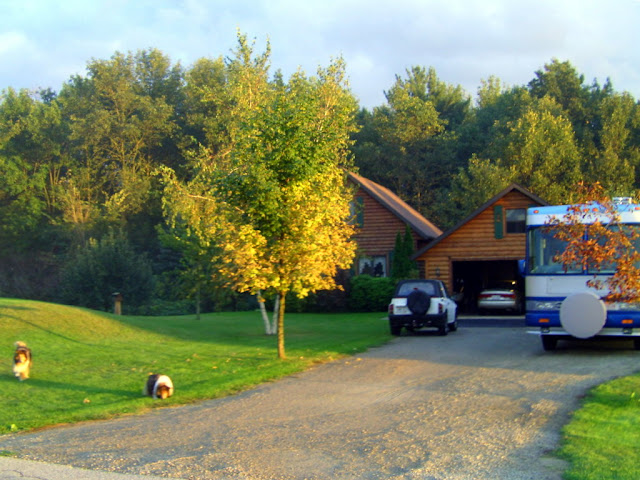 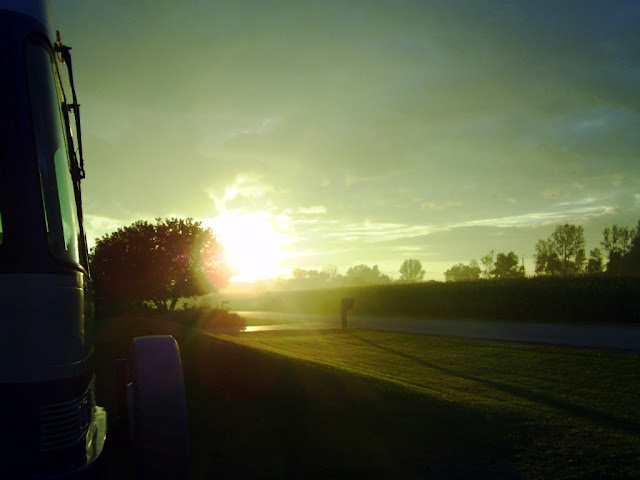 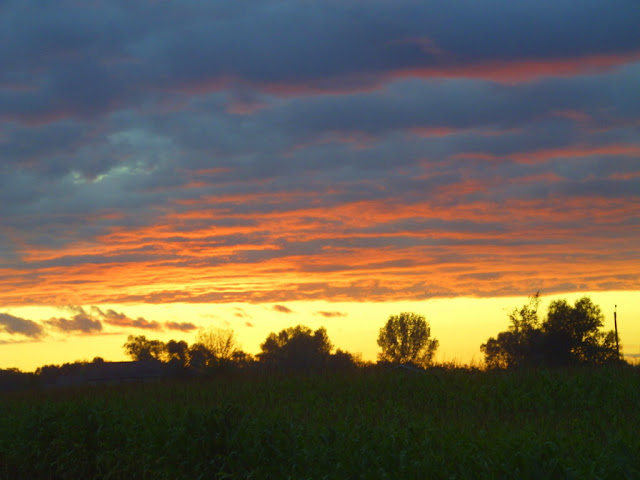 But.... we are repacking the rig to go again on Friday for the weekend!!!!
YAAAYYYYYYYYYY!!!!!
.
Posted by KarenInTheWoods at 9:07 AM