What do those weathermen know?  They forecasted clouds and rain today.  Ahem?

Not that we are complaining, mind you, but we have another blue sky puffy cloud day here!~

After a panny-cake breakfast, we hopped in the Tracker to go see a fiber farm.   Yes, a farm that grows fiber... not wheat, barley or oats... no no noooooooooo  FIBERS!   Like llamas and sheep!

Loretta Pederson said come on over, while she would still be milking a cow or goats when we got there, come on down to the barn.... and we did! 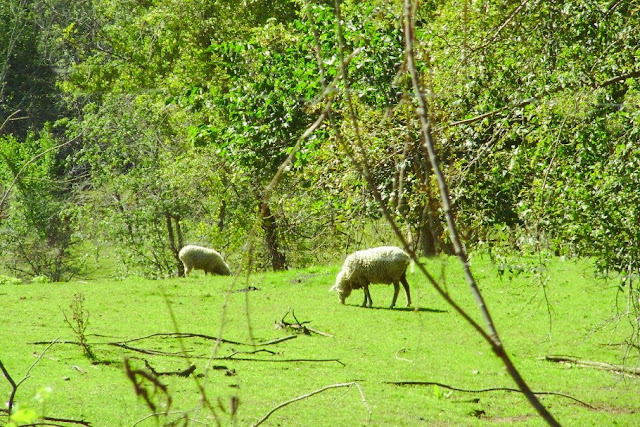 We saw the note on the door to head down and around back to the barn... and there we found her milking four goats in a row.... they were just finishing up and being sent out to the pasture. 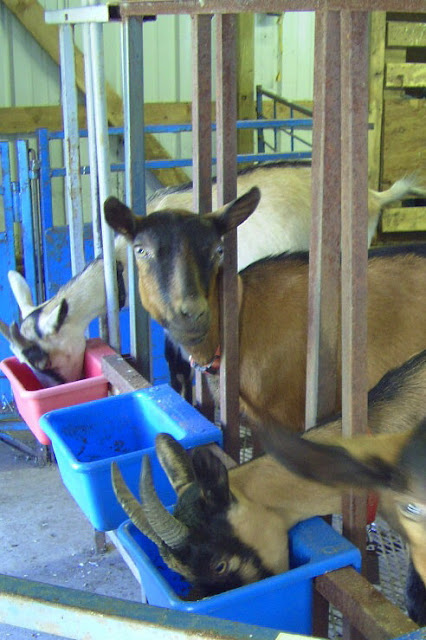 The lovely soft fawn colored Guernsey cow had already been milked and was asking for a scratch or two... and Loretta warned me that she wanted to LICK me too!  She tried to lick the camera, and I managed to get a pic of her drinking water before she slobbered the camera lens! 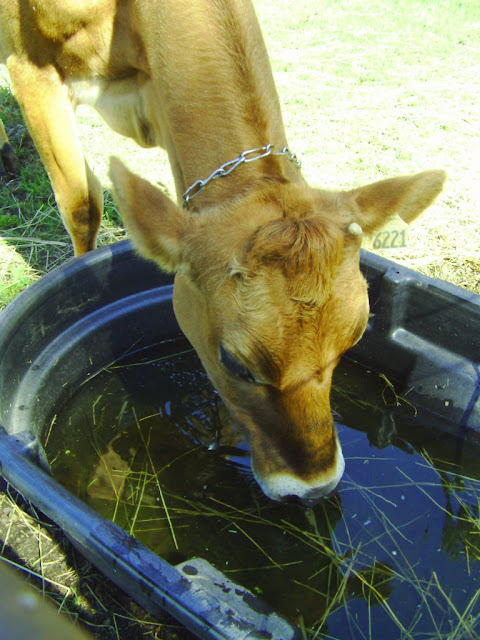 After cleaning the lens off, I was able to snap a few more pics
The faithful border collie, Reba, is a geriatric 15 years old, but greeted us warmly and waited for more scratches and pets as we wandered around, snapping pics of the llamas and sheep. 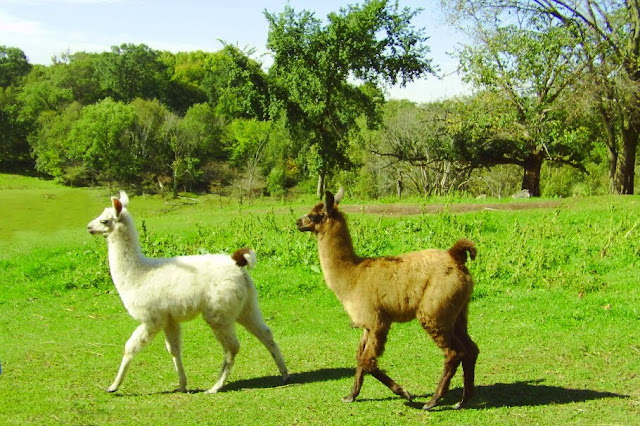 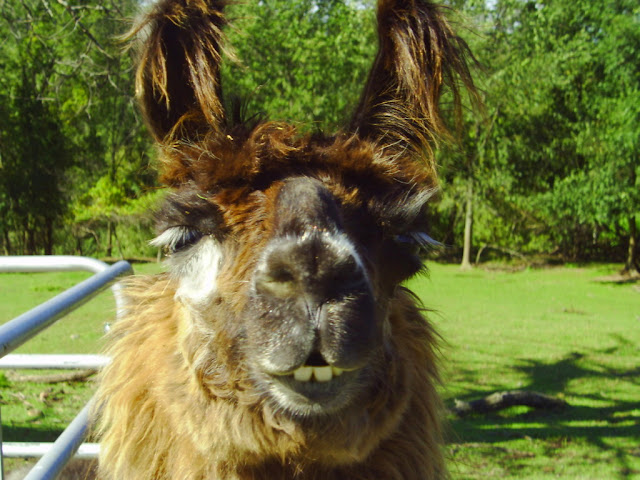 The rolling hills and meadows made the most picturesque pasture lands 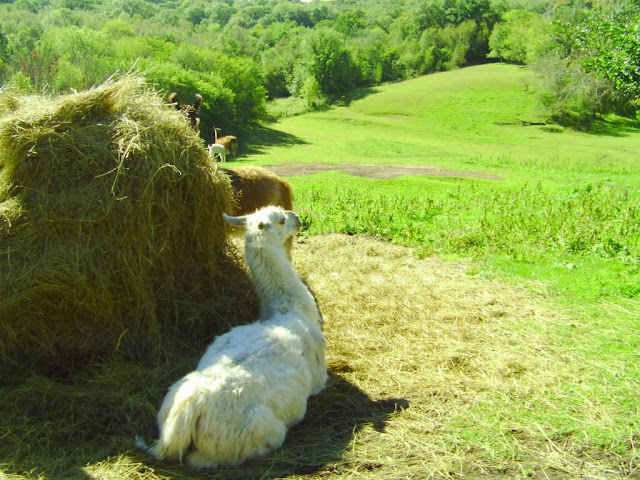 Once Loretta's chores were done, we went to the house to see her looms and wheels and fibers!  Wheee it was a virtual HEAVEN of fibery toys... from a big Harrisville Rug Loom with Shaftswitching levers, to her faithful Louet David sitting in the corner.... Loretta posed for a pic so you all know who I am talking about. 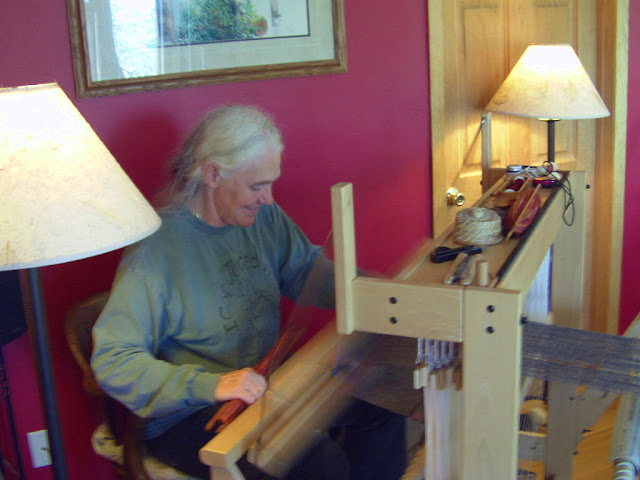 On a side room there were more looms and fibers, and in the main area were 2 Rio Grand walking wheels... among other wheels and toys for spinning yarns.   Down in the lower level she had more looms, more toys and lots more fibers.   She even had a huge LeClerc Kebec loom that takes two weavers to operate because it is so wide.  We visited for a while and she showed me a bunch of her projects she has been working on.  It was such a delightful show-n-tell, but before we knew it, it was almost noon!  We had to get back and move on out of our campsite at the park.  We said our Goodbyes and headed back to Interstate park.

Hitting the road after grabbing a quick sandwhich, we drove about 75 miles east to Ladysmith, where we looked for a fiber shop, that was opened in 2008.  It's now closed and something else is in that building, so we drove on the last 25 miles south to another state park for the evening.

It's called Brunet Island State Park and the whole place is on an island just north of the town of Cornell, WI.   We went into the north campground because it was less crowded and non-electric, which was fine with us.  We are situated with a lagoon right out our door on one side, and the wide spot in the Chippewa River on the other side... the park is a loop of sites with water all around.  What a lovely place!   There are 2 other campers in the whole northern campground loop, and about 15 or so in the southern campground. 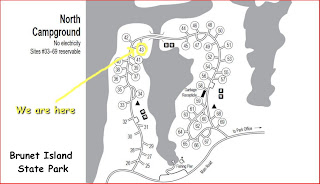 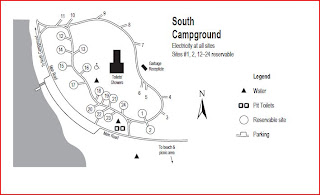 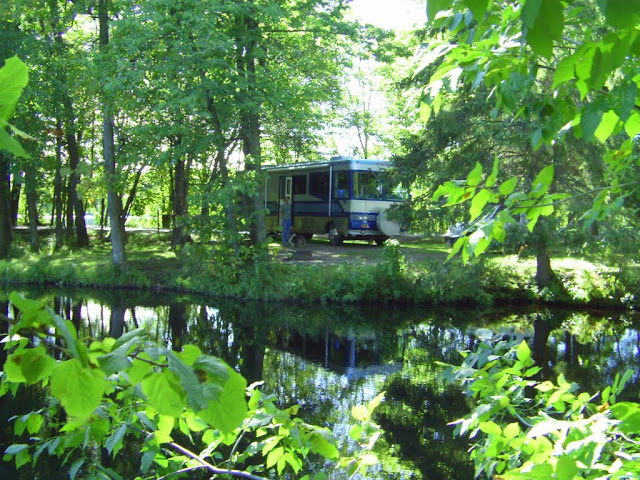 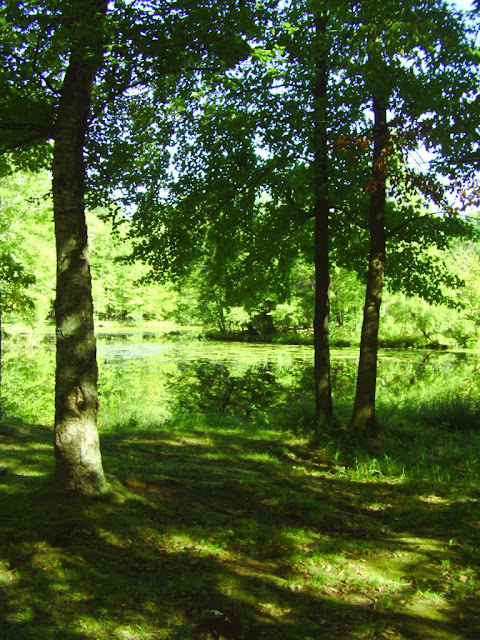 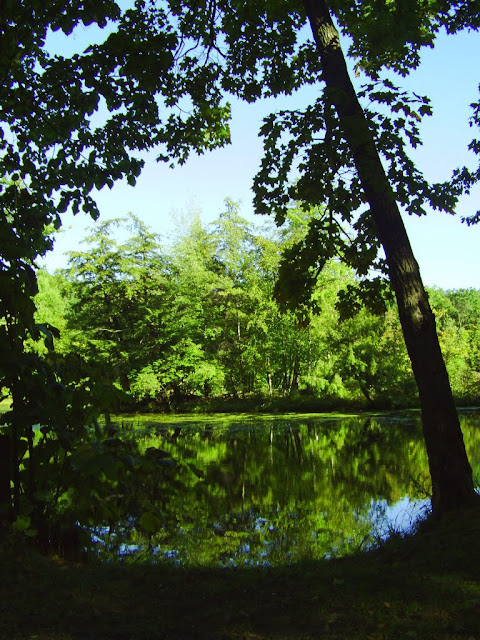 And SOMEONE is starting to relax!!!! 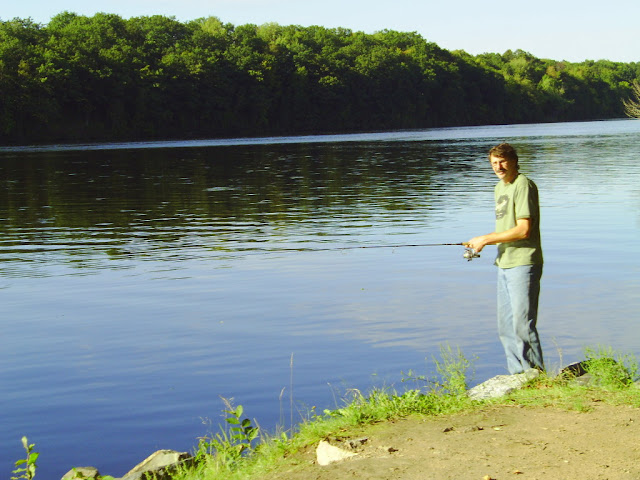 After visiting with the host and hostess for a bit, and some other neighboring campers who rode by on bikes (they have a sheltie too)  we fired up the Easy Bake Oven for some lasagna....  It was Stouffer's veggie lasagna outta a box, but it sure tasted GREAT!    With a bottle of wine, and some quiet splashes of jumping fish, and a setting sun.... 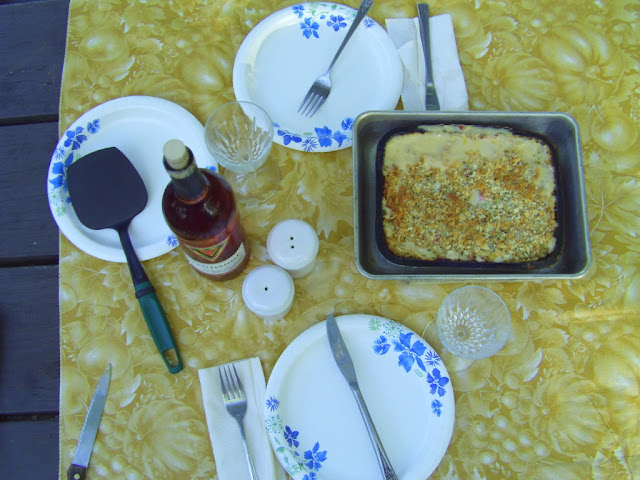 We took the dogs for a walk along the shoreline... of course they had to SNIFF! 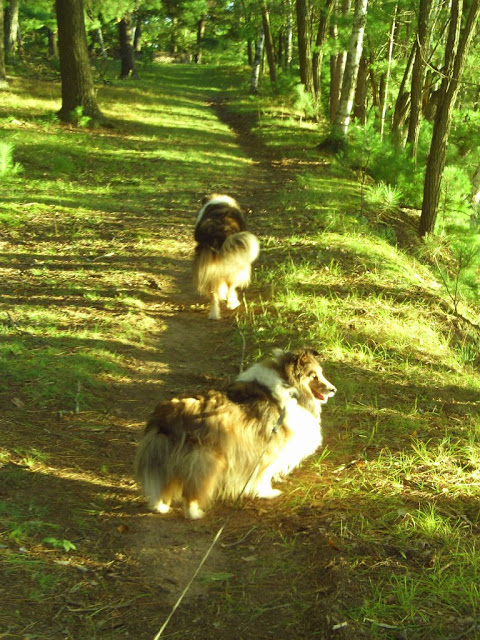 the sun was setting and everything was golden! 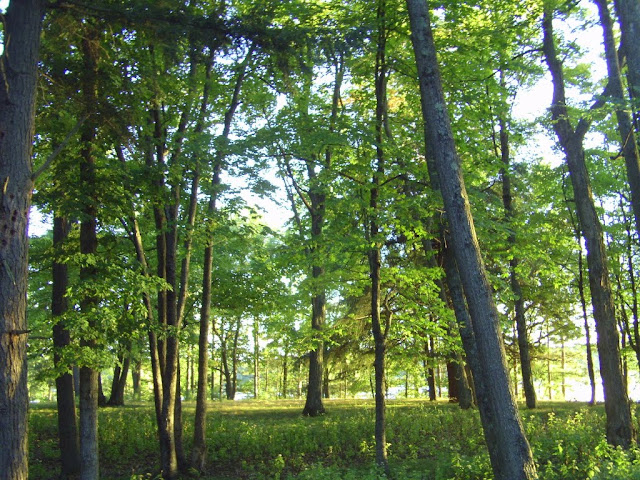 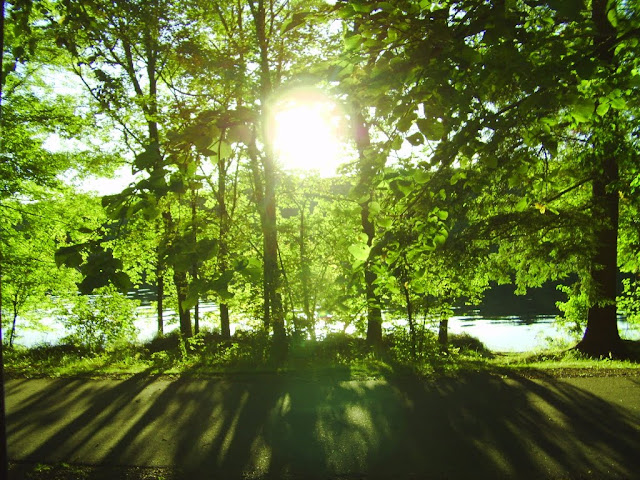 Life doesn't get much better than this!
Posted by KarenInTheWoods at 9:29 PM