I recall a Johnny Cash song from my childhood....

How high's the water, mama?
Five feet high and risin

Yes, after many inches of rain in our state of Wisconsin, much of the water from north and west of us flow on by our house... on their way into the Green Bay and Lake Michigan.   Our rive is now almost at flood stage at 8.78, 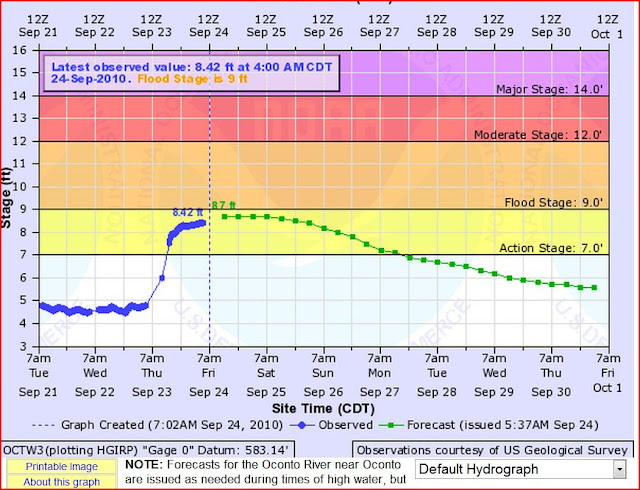 The web site also states:
At flood stage...widespread flooding occurs in a public campground in the city of Oconto. Water approaches the back yards of several homes along the river in Oconto...and there is widespread lowland flooding

It has gone as high at 14+feet in the past and we have been fine and high and dry, so not really worried.  Our house is build up on high ground, and we are not even located in the 100 year flood plain.

But IF ... and that is a huge IF the dam upriver were to fail, then we would have to get outta here.


Our plan is that if it gets halfway to the house, which is built up very high away from the river, that I pop the grandkid and dogs in the motorhome and take off to higher ground...  who cares about the house.  That is replaceable, we are not.    We have a friend up on higher ground with a large parking lot by his rental storage units to hole up at if we need to.
The winds are really whipping up now, and the television reports are that because of the over saturated ground, the trees are easily blown over.  A few are down already on our road as Erin came out this morning.  At least the rains stopped, though the river is still flowing from the runoff up in the NW areas of us upriver.
Chelsea and I are singing:


How High's the Water Gramma?   Nine Feet High and Risin.....
Posted by KarenInTheWoods at 8:01 AM