Before I get into the new things we have done to the rig... I wanted to just say I had the most DELIGHTFUL phone call today!  My grandson, Jameson, told me for the first time, in his own words:


"I WUV OOO, GRAMMA" !!!
Made my heart melt!
Now, on to the modifications---
This first one is kinda a "two parter"  ....  first off, let me explain that we use a tire pressure monitoring system for all 6 tires on the motorhome.  Recently, by adding the Tracker being towed behind, we put four more sensors on those tires too.  BUT--- the base unit for the monitoring system could not pick up the signals of the four Tracker tires when the base is setting up on the dash.
We could invest another $100 into a signal repeater for this specific brand of tire monitoring system... but we are thinking there is another way to work around this. Plus, we are *cheap*!
We first tried moving the base unit to the dining table that is in the middle of our coach,  after Steve installed a 12 volt cigarette lighter type outlet there... but..  now it could *see* the two back tires on the Tracker, but not the two front ones!   I figured the heavy lined metal box around the rear engine compartment under our bed was blocking the signal between the table and the front tires of the Tracker.
So Steveio decided to install another 12 volt outlet in the bedroom closer to the back of the rig to see if we can pick up the signal from back there, above the engine box, making a clearer path to the Tracker.  Plus, the outlet can be used once we are parked in place for either charging up a cell phone or even plugging in my laptop (I have both AC and DC cords for my laptop)
The valances in our bedroom, we have 12 volt fluorescent lights running the length of them, hidden inside, that are original to the rig.  So the wiring is already there to tap into, and no holes needed to be drilled after Steveio located the best spot for the outlet.
He snugged an outlet up in the corner of the valance, hidden out of sight, and ran the wires along the inside over to the wiring for the light. A few wire clips and wire nuts, it was Easy Peasy and no holes drilled!~ 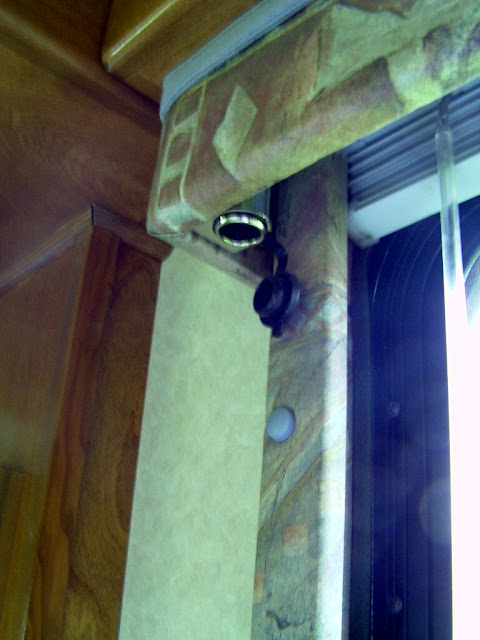 Next was *where* to locate the base unit for the monitor?  Well, the entire back of our motorhome above the headboard is one huge mirror.  Ain't gonna be drilling any holes in that!   Sooooo  my idea... a suction cup and an eyeglass cord! 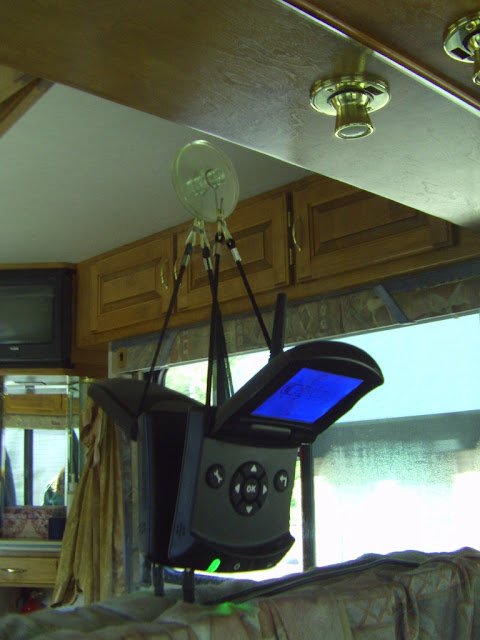 By locating it up and center over the bed, the cord can reach the outlet, and from my passenger seat up front, I can glance back and see the green light to the left, meaning all is fine.   If we have low pressure, the red lights goes on and a very loud beeping ensues.  Easily heard from up front.
And yes, it now monitors all 4 tires on the Tracker and all 6 on the motorhome.  Mission Accomplished!
Next up on the list...
This is something we saw in a rig owned by our Safari Friends:  Mel and Snap Snap Snap Paula    (that snapping is Steveio trying to remember her name)   LOL   They had mounted a nice towel bar on the side of the kitchen cabinet, next to the stove.  Previously, we had been hanging towels through the handles of the drawers, which just seem to get in the way of the cabinets below.
Now, of course, we could just go BUY a towel bar, right?   But we are *Cheap* and like to reuse, recycle or make something work.  Last year we had removed the stair cover (in the photo below) because it gets in the way of our heater.  We never used it anyway. It's made to flap down over the stair well, and the handle is a grab bar for entering and leaving the rig.  It really was just in the way, so we took it out.  We still had it laying in the garage.  Are you thinking what we were thinking?  See that nice grab bar on the side of the stair cover? 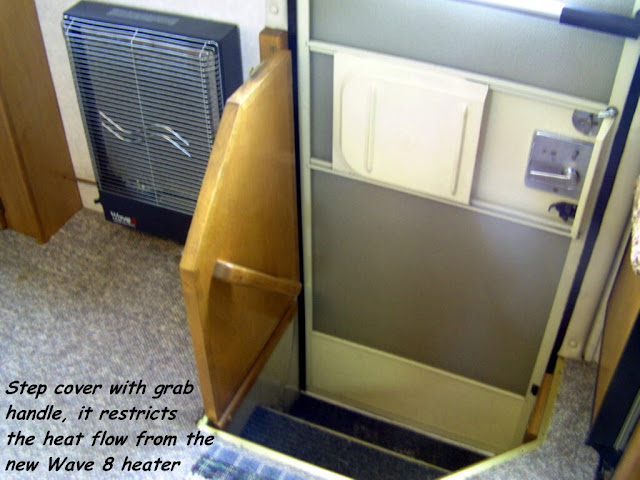 Yup.  We pulled it off and attached it to the side of the kitchen cabinet... nice low profile, doesn't stick out too far, and the wood matches our cabinetry PERFECTLY!   LOL 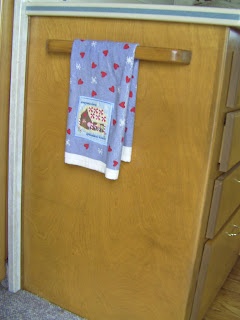 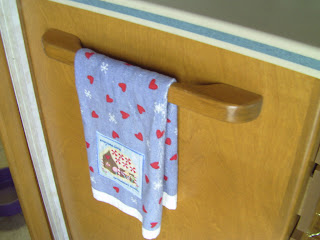 Okay, now the last one is pretty minor... but still I thought it was worth a mention.   A long time ago, I bought this little cord to be able to plug in a portable Walkman CD player to my home stereo to play through it's speakers.  It has a plug for headphone jack on one end and two RCA stereo plugs on the other side.  We have had the cord laying in a drawer now for years....    And I got to thinking..... 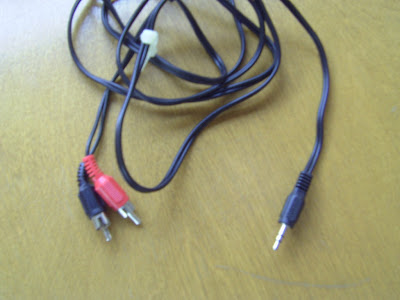 In our motorhome, we have a huge stereo home theater system that we never use.  It's hooked up to the TV with the DVD player.. and also the dash stereo with a 10 disc CD player.  We never use those speakers.  There are FOURTEEN of them, I am not kidding!  They are mounted on the ceiling, in the cabinets, down on the floor in front (sub woofer stuff)  and we have not really ever used them at all.  If we do have the tv on, it plays through it's own speakers, and it's just for news in the background.  Not to listen to some heart-stopping thriller movie with great sound effects!  Not our style.   We had contemplated in the past to take the speakers down, but they would leave marks and holes and wires all over the ceilings.  So they just sit there, looking impressive.
But we do like this little tiny MP3 player I have.  It's a mere $20 gadget that plugs right into the USB port on my computer to load it up.  Often I plug it into some tiny speakers  that are powered right from MP3 player and take it outside to set by my lawnchair.  Or if we do use them inside, we let them set by the table in the photo below.  I like to set it on Random and let it play whatever it wants.  It's all good to me. 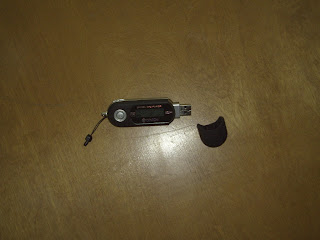 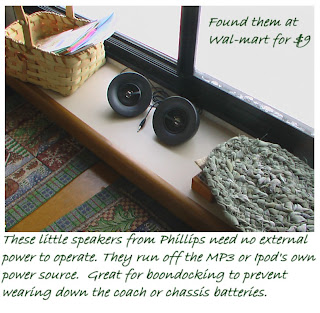 Soooo back to that little cord.  If it could be hooked up between that little MP3 player and our speakers, it could use them for music playing in the rig!   Sure 'nuff!!!!   Looking up in our front cabinet, on the big Hot Shotz amp unit, there is a pair of left and right RCA jacks!   Hook it up, flick the switch and it works~!
I know it will use some battery power to run, but we checked it out on the Trimetric gauge and it is very little.  The MP3 unit runs off one AAA battery, so no recharging is needed for that to run. 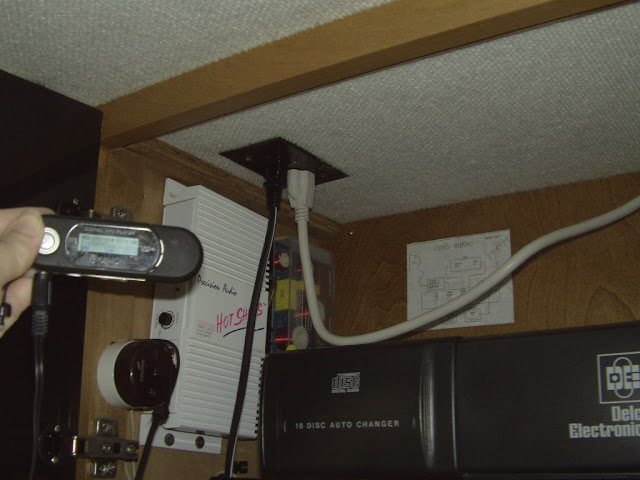 So that is it for our three little modifications.
Nothing earth shaking.
But just enough to make things even more comfortable in our
Home Away From Home! 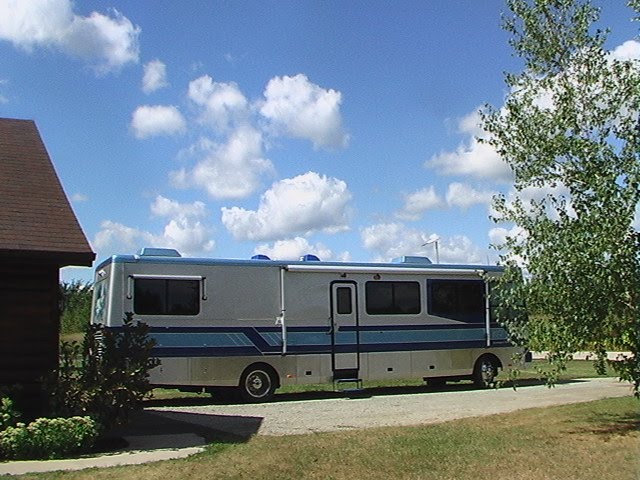 Posted by KarenInTheWoods at 11:57 AM