Ahhhh that Steveio, he is all Hitch-Itchy!  From the moment he got up this morning, he was prepping everything to hit the road.  He had agreed to wait till 11 or 12,  but by 8am he was raring to go!   Four days in one spot was too much for him????   I was boiling taters and eggs to make potato salad (gotta use up those $4 eggs ya know)  and I was putzing and catching up on blogs.  He was all over the place, stowing things away that I was still going to use yet, and he is just having the worst case of Hitch Itch!

Granted, the weather reports are not looking favorable for later in the day, so he wants to get going and get settled in at our next camping site before the bad weather starts.  We were going to head near Interstate park on the St. Croix river, about 120 miles SE of here.  But now a change of plans (most RVers have “Plans Made in Jello”)  now has us going to St. Croix State Park instead.  We will dump our tanks there and see if we can leave the motorhome in a day-use parkinglot.  We can unhook the toad to check out a small rustic national forest park north of there called Boulder campground on Rock Lake.  If we like the looks of it, we will go back and get the rig.   If we don’t like the looks, we will just camp at the St. Croix State Park.  It’s a huge park of 215 campsites, in three separate campground loops.  Might be quiet there after the holiday weekend, but might be more people than we are comfortable with.  Guess we will see when we get there, huh?

An observation about Minnesota state roads.  The East/West roads are all bumpy!  They go kathunka kathunka kathunka…. but the North/South roads seem to be all smoothly blacktopped. Go figger?

As we drove through Hinckley, MN we rounded a corner and saw a gas station with an RV dump sign!   Great, we were planning to drive into St. Croix state park to dump, and maneuver through their 215 campsites to find the dump, but now we don’t need to.   Like I said… “Plans Made in Jello”!   The pump cut off at $100 with our American Express, but it let us swipe again for another chance to keep on filling.  At $2.99 a gallon for diesel, it takes more than $100 to fill our 100 gallon tank!  So two swipes, and almost $200 later, and we were filled up again.  Good to go, and we dumped our holding tanks at the same time.
Now we don’t have to stop at the Croix State Park to dump afterall, and we can just move on to the tiny state forest campground called Boulder Campground at Rock Lake.  Will see if it’s “our kind of place”   haha.  I might want to pick up some veggies, perhaps carrots, celery etc to make up some soup with our leftover turkey.  We are due for rain and thunderstorms later tonight and into tomorrow, so I am thinking a pot of soup would be a good thing.

We passed a HUGE casino near Hinckley, and there was a sardine-can-packed campground alongside of it, plus about another 20-30 motorhomes in the parking lot itself.  Thanks but no thanks, I think we are heading to the woods.

We drove a long way on gravel roads to get here, but we made it!  We are at Boulder Campground on Rock Lake, in the St. Croix state forest.   A rustic campground with primitive camping, no hookups, just tables, fire rings, an outhouse and a lake!
http://www.dnr.state.mn.us/state_forests/facilities/cmp00044/index.html 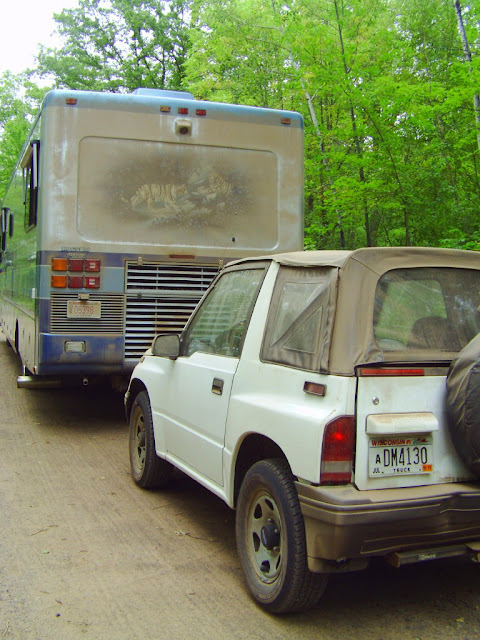 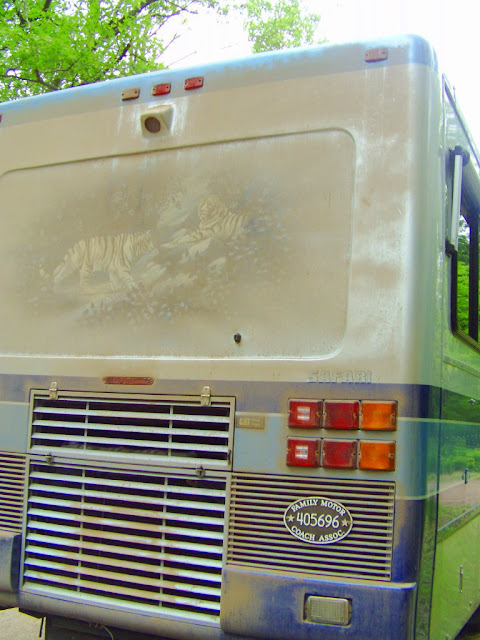 Maybe the rain overnight will wash this all off?

What a lovely place!   It’s quiet, tranquil, scenic and most of all, we are all alone!!! There was one car here at a tenting site, where you have to carry your stuff into the site down a path,  but they packed up and left.  All of the other 21 sites are empty.  We took number 7 that overlooks the lake and *picnic grounds* with the well pitcher pump. 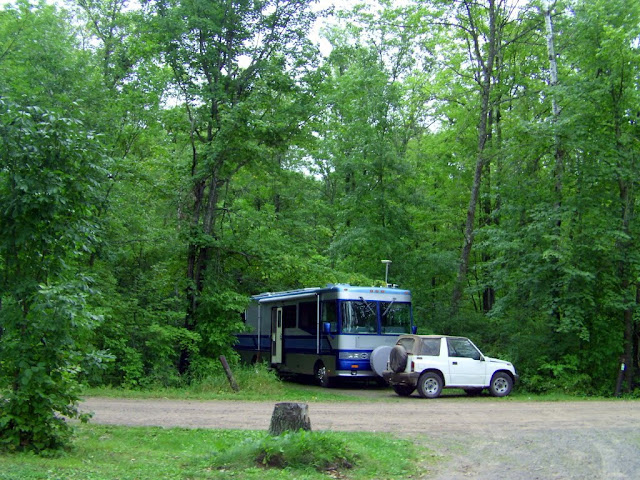 This is the view out of our front windshield... 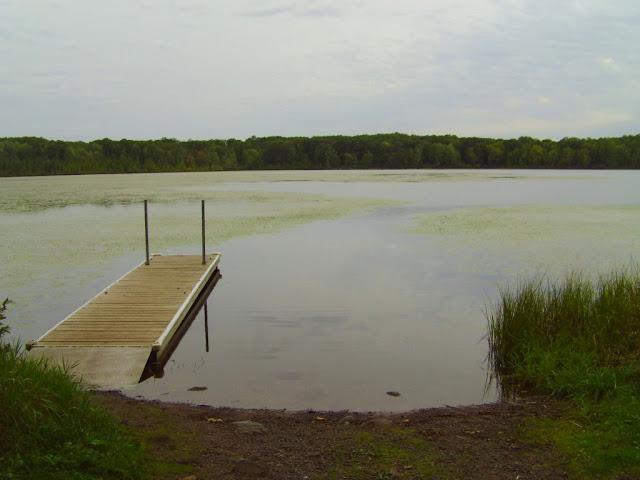 After a good lunch of leftover turkey sandwiches and some potato salad, I decided to take a peaceful little nap and Steveio went down to see what kind of fish this lake was hiding. 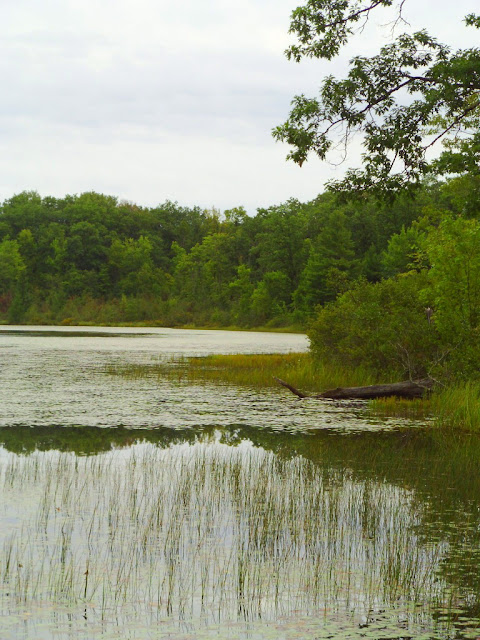 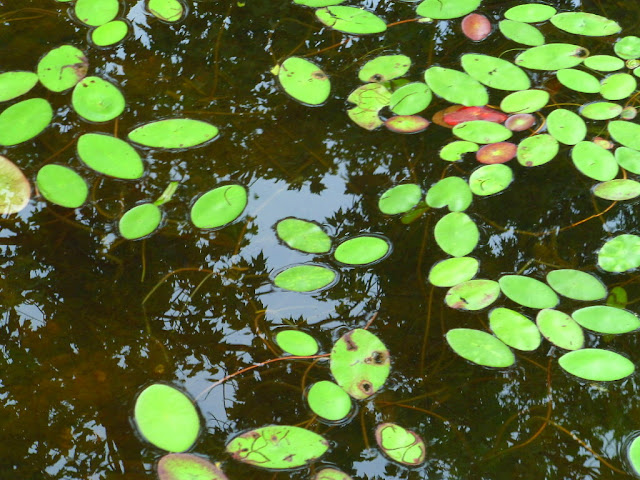 We made some yummy soup and crackers for supper, we tuned into the tv to check the weather and found six digital stations out of Duluth!  Wheee heeeee   We have the weather radio set to this county, but nice to have a somewhat local weather forecast too on the screen. 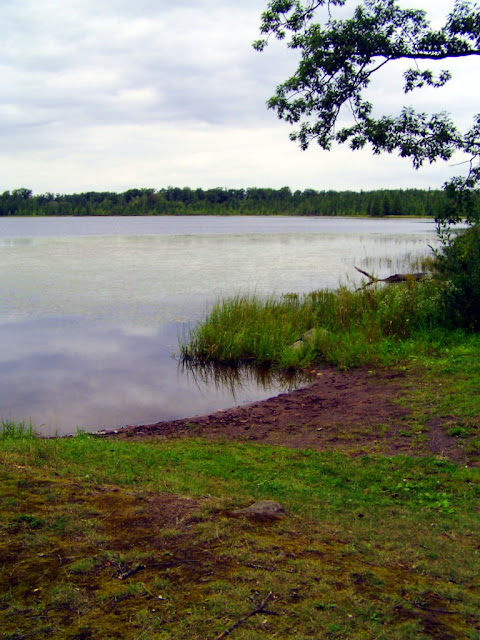 Remember when I showed you the *red roads* from the Iron Ore in the area?
I saw this pretty rock of ore and thought I would snap a pic of it 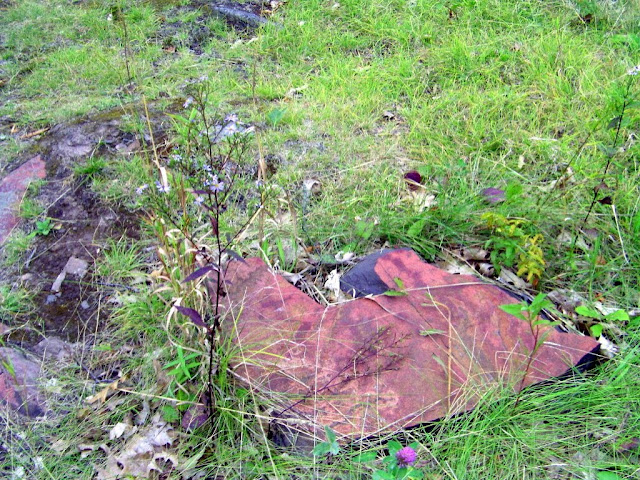 The doggers had a chance to get out and sniff... 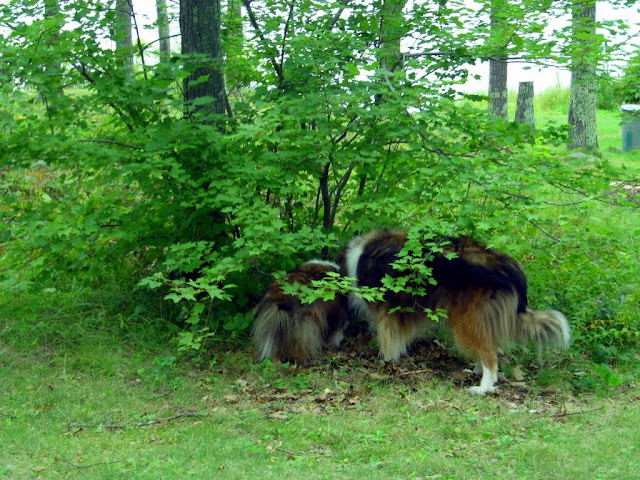 and check out the lake too. 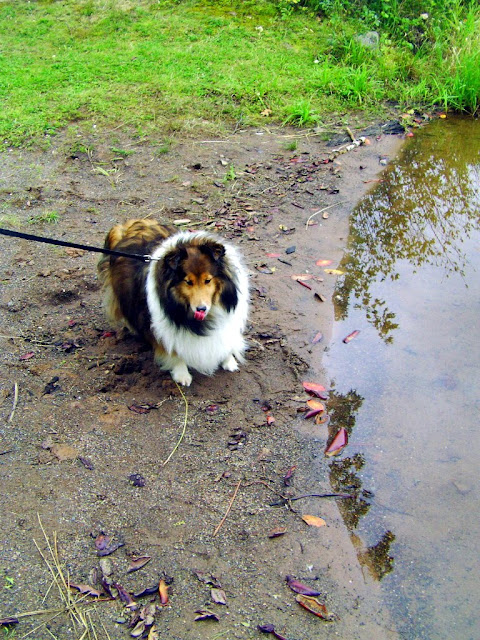 I thought this was a very artful arrangement of natural growth around this stump.  God's landscaping! 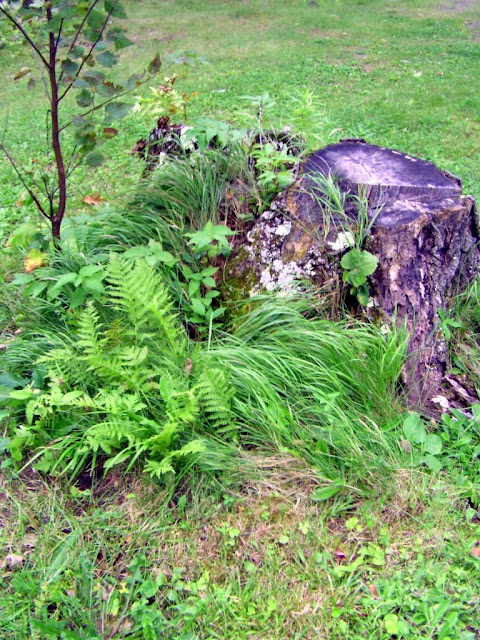 Seeing as it’s going to be rainy tonight and tomorrow, perhaps a bit of tv will be nice.   Ahhh whoddah thunk we would be sitting here in the middle of the woods, watching Wheel of Fortune?  LOL  Steveio popped some popcorn later and we watched Antiques Roadshow and History Detectives too.

While watching tv, I was spinning up the rest of my llama/alpaca/sheep wool blend, now I have enough to knit another pair of socks from it.  I had already done three pairs from this batch, and this was the very end.  I was hoping to get two balls of yarn from the final amount of fleece and I did!   For you non-spinners reading this, every inch of yarn must really be spun three times.  Once to make a single strand…. then once again for a second strand of singles.. then you run both strands through the wheel again together, plying them in the opposite direction to make *rope*… or with soft wool into what is known as yarn.  So every inch of that finished yarn has been handled three times  by my fingers.

Yawwwnnnn time for bed, with the rain softly falling on the motorhome roof....