I went back in my photos to see what I forgot to blog about during the last month or so. I totally forgot about this exciting day in our back yard!

In late July, we were sitting in our lounge chairs and noticed a bunch of sawdust around the base of the power pole that is stuck in our backyard.  The pole is totally ugly to begin with, plus it's tilted to one side.  It's all dried out and grey and full of holes. To make matters worse, it never got replaced when the power company replaced all of the other poles in our block.  We think they forgot us.

Our pole is at the end of a row of poles, and it supplies power to our neighbor's home via the overhead wires. Our power lines are buried.  Also we don't use the cable or the telephone lines that are on the pole either.  But we have to have it in our yard.

When we put up the fence, we inquired about having it moved to the property line 8 feet over.  The cost was atrocious!  It was about $1,200 for the power company, and another $800-1,000 for the cable and phone lines to be moved.  No thank you.

Well.... now that we saw the piles of sawdust around the base, we looked closer and saw it was crawling with bugs!  It appears that some kind of boring beetle was having a feast on the old worn wood.  We called the power company and they someone out right away.  One good whack of a hammer sent the bugs a-scurrying!  We sprayed them down with a strong insecticide and kept the dogs away.  The guys from the power company said it would be replaced immediately, due to the danger of it snapping off in the next storm.  The base was weakened and it could cause a danger if it went over. Being at the end of a line, if it broke the wires would be on the ground.  If it had been suspended between two other poles, it would not be so tragic.  They moved us right up the line for replacement toot sweet.

Again, we asked about relocating it ON the property line, but nope--- they could only go a few feet from the present location. If we went over 6 more feet, it would be wayyyy too expensive.  Ouch!

The work crew guys arrived in a few days and we offered to remove parts of the fence to access the yard. They said no problem, they have all the equipment to reach over the fence and do it from the neighbor's unfenced backyard.  They have easement rights to drive across the lawns to get to the poles they said.

Here is the old pole: 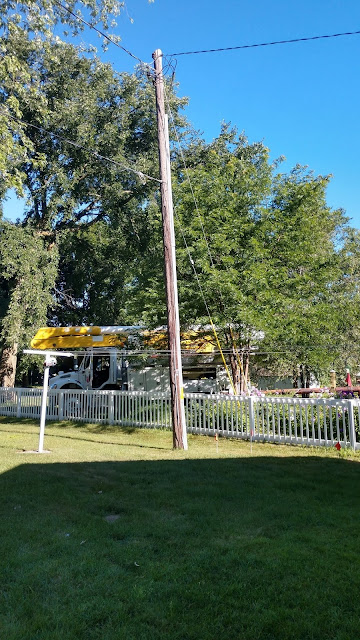 They fired up the big tools and eased this huge hole driller auger device from the back of a truck, carefully over the fence next to the pole.  I settled down in a lawn chair to watch the show! 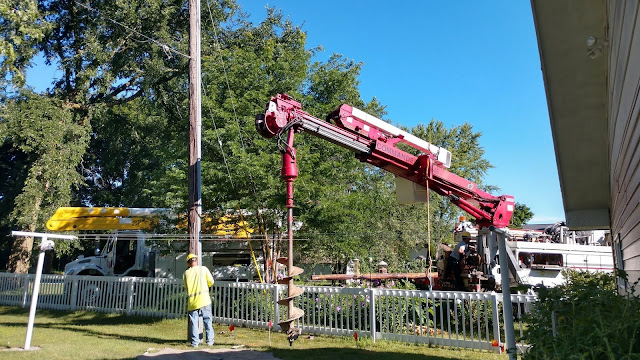 They carefully dumped all the dirt from the hole onto a tarp, and made sure to not make a mess on our lawn.  Soon it was time to attach the new pole to a cable and tauntly snug it up to a large arm.  It came up up up and over the fence into place! 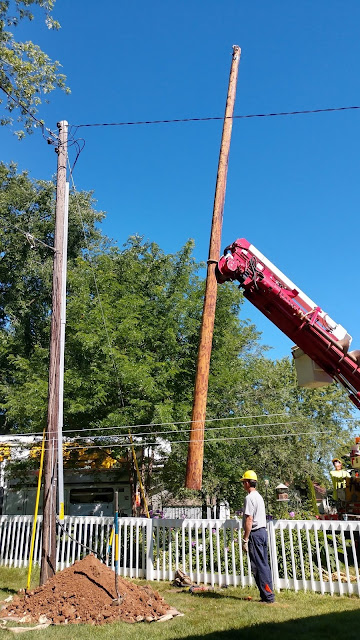 It was so exciting and interesting that I almost forgot to make a little video clip of it!  So here they are putting the pole into place with that big arm:

Once they got the new pole upright and perfectly plumb, they started to move over the wires from the old post to the new one.  They had to add little extension pieces to each of the lines. It was fun to watch and appreciate the care and caution they use when working with such high voltage. 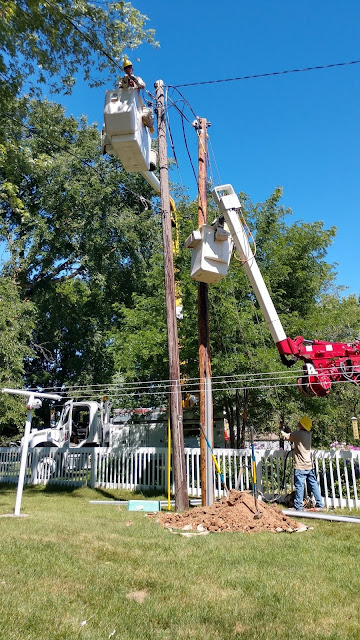 While the guy was up there, he gave the top of the pole a whack and it was just crawling with beetles!  They were dropping to the ground and we sprayed again to kill them off before they infiltrated our garage or house!   Next he grabbed a chainsaw and took off the top few sections, to carefully move the nest of the bugs onto their trucks to take it away.  Then the remaining trunk (which was surprisingly more solid) was tugged out a bit at a time with their big boom. I took a video of that process too:

Within just a few hours, they had dug the hole, put in the new pole, changed over the wires, and removed the old pole.  They refilled the hole and tamped down the dirt,  One guy even brought two big buckets of good black dirt and some grass seed as well.  They sure did a good job, and we have a nice neat upright level plumb pole! 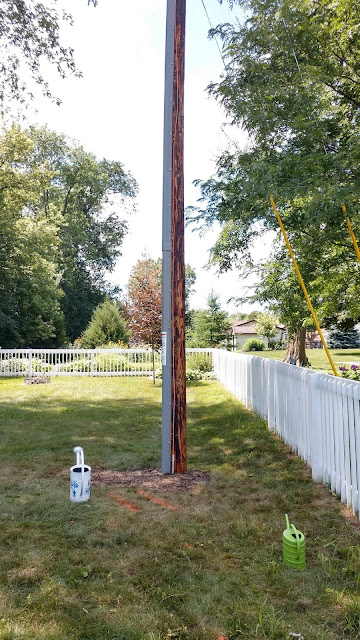 It would have been nice to have it relocated to the other side of the fence as we wished... Our property line is actually is almost 2 feet past the fence. When we put the fence up, we had to put the fence between the pole and two big cable tie-downs.  It was as far over as we could. The tie downs go into the neighbor's yard and we could only fit the fence along that portion of the yard.  Oh well, we haven't won the lottery lately, so no moving the pole for us.  We will be happy with the pole where it is. 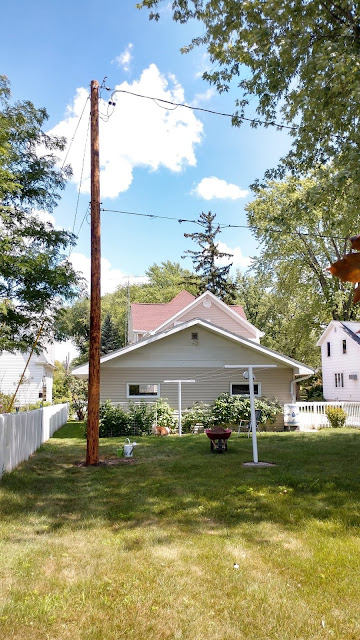 Things have definitely cooled down this week in Wisconsin.  Last night we turned on the electric mattress pad heater so our bed was cozy warm.  This morning Steve had to leave for work by 6:30 a.m.  He brought me up a cup of coffee before he left, and tossed both dogs onto the bed to keep me company while I watched the news. 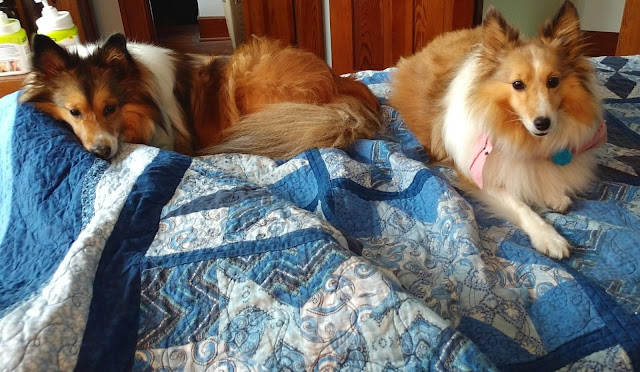 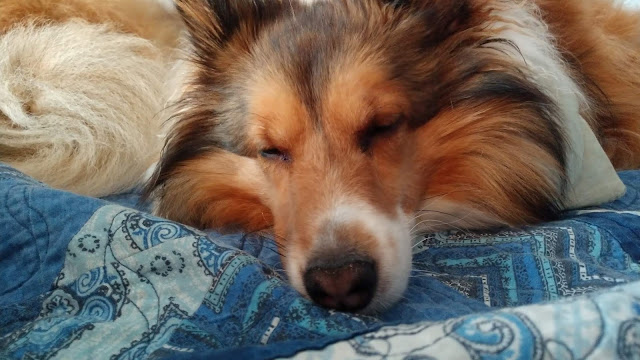 They sure enjoyed the warmth!!! 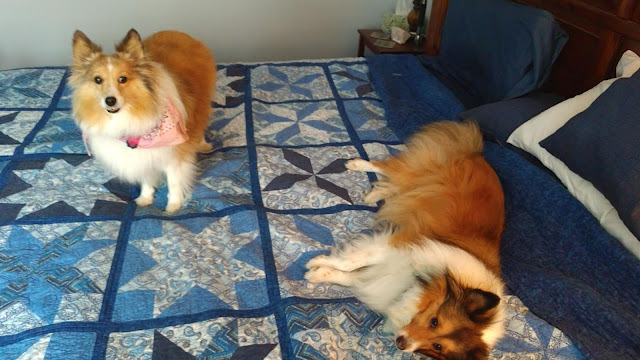 When I finally did get up,
neither one wanted to leave the bed!

Posted by KarenInTheWoods at 8:17 PM