Ahhhh back to blogging!

Last month, I had started a three part blog, and only wrote TWO of the parts!  Shame on me!  Here are the first two blogs:

Last month, in between doctor appointments, I had time to wander through a few thrift shops. I NEVER find good deals at Goodwill. That store always seems overpriced and too much profit is being made on the backs of donations and handicapped folks doing the work.  But I had time to waste... so I wandered through the one in Fond du Lac. Am I ever glad I did!

I saw these enormous heavy iron light fixtures, two of them ... for only $4.99 each!  Yes, I could not believe it! Only $4.99 each.  I called Steve to ask if this might be a thing we wanted, and he said sure. If we didn't like them, we could just resell them?  I said they looked old, but had modern grounded wiring in them. 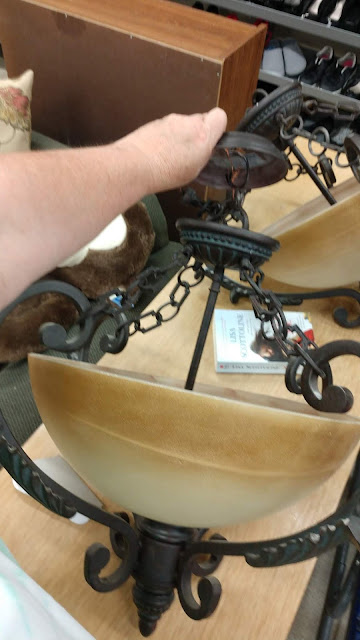 Okayyyyyy  So I bought them.  I had an "idea" of what I wanted to do with them.

I didn't care for the beige/alabaster colored shade. That was too modern. They weren't cracked, it's just the manufacturing lines that look goofy on them.  The iron fixture itself was ornate and fancy and Mission Style enough to fit our decor and taste.

(a little backstory here) A while back we had accidently ordered 2 more stained glass shades from Menards, thinking we were ordering the smaller 5" ones for our pendant lights. (which online said they were only $7.98 each)  They shipped me two of these large 15" ones instead!  I called them to fix the error, and they said I had to pay a 20% restocking charge!  I said no no noooo you don't understand---- these are the large $79.00 ones they shipped by accident.  They didn't care and said I had to pay $1.58 to return each of them.  Heck, I decided that I would just keep them at that price of only $7.98 each. We already have two lamps that match this same line of shades, as well as our livingroom ceiling fan and pendants in the kitchen.  I like things that match, ya know.

Carefully tucked away in our storage area, these two extra leaded glass shades were just waiting for a day like today to "shine"!  We removed one of the beige alabaster shades and installed the leaded glass one. Wheeeeee! 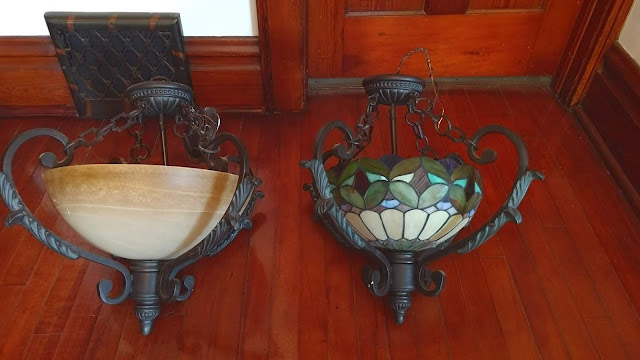 I just loved the heavy iron work of the frames
and the detailed little leaves on each of the arms. 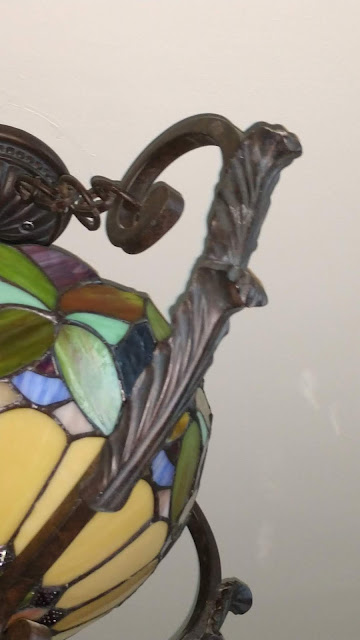 We put one up in the new-to-us Family Room, and stood back to admire our handiwork. WOW!  I just loved the reflection on the ceiling as well as how the light shines through the glass pieces. Yes, this is certainly better than the ceiling fan we had in there.  I hate ceiling fans anyhow.  We gave it to our nephew who just bought a house and needed one. 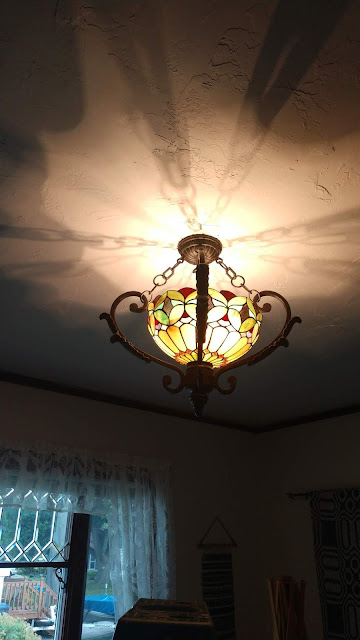 We then had a choice to make.... where to put the other one?  We already had a very nice crystal light fixture we put in the foyer when we first bought the house (and fully rewired the whole house with the help of our electrician son-in-law)   I liked the fixture we had, but I liked these stained glass ones even more.  Plus... it would match and you can see each of the light fixtures from one room to the other.


My darling Steveio put the second one up in the foyer. 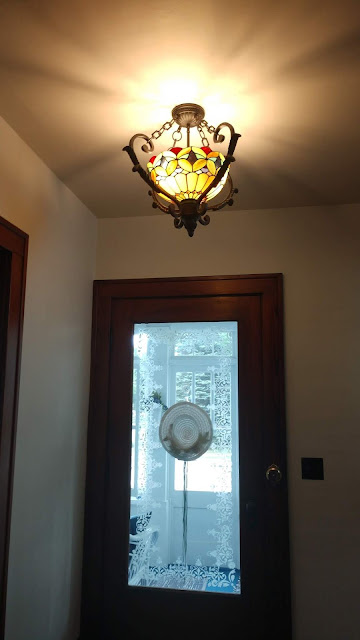 But, what to do with that nice crystal one that we had in the foyer?  It was the ONLY light fixture we paid full price for when we were re-wiring the house.  All the others were on sale or clearance.  It's nice and pretty and bling bling.  I opted to put it in our bedroom, but Steve said no, he likes the ceiling fan in there. *ugh*

The hallway upstairs at the top of the stairs! 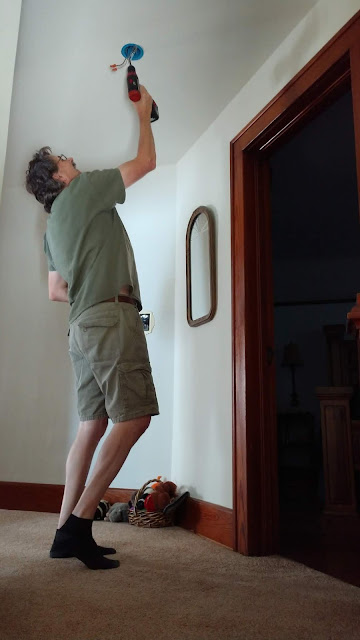 You see it as you come up the front staircase,
and it still gives a bit of bling bling to the hall. 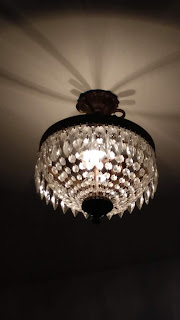 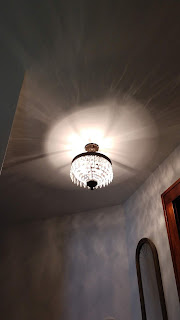 Ahhhhh so there we have it, all electrified and illuminated and matchy matchy.  Hahahaaaa If we allowed designer people to come in here from HGTV to do a home makeover they would yank them all out and say we need to knock down walls, paint the woodwork, and get more "flow". No thanks. We like it this way.

PS: today I hit some rummage sales in the next town over. It was their annual City Wide Sales. I found a beautiful brand new quilting kit from Bonnie Blue Quilting that retails for $99.00--- for only $5.00 !   It has all of the fabrics to complete this quilt in the kit, including 110 separate pieces of fabric, with no two prints the same! 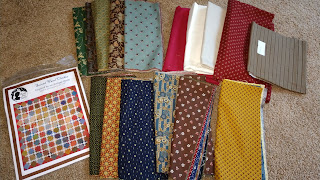 They also had another quilt that was just started --- someone completed some strip sets and four blocks and included all of the fabric to finish it, a Christmas Double Irish Chain pattern.  Only $3.00. 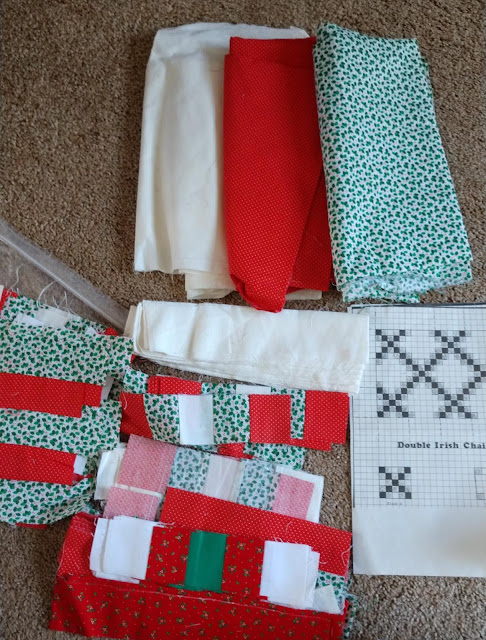 Plus a brand new quilting tagging basting gun, in the package for only 25 cents.  They retail for $29.00 at Joann's. This is used to put quilts together with the backing and batting and hold it together instead of using pins.  When done, you snip off the little plastic tabs and remove them. Similar to a price tagging gun for clothing in retail stores.  This will be handy when I am quilting while travelling in our motorhome, when I don't have the big frame to roll my quilts onto. 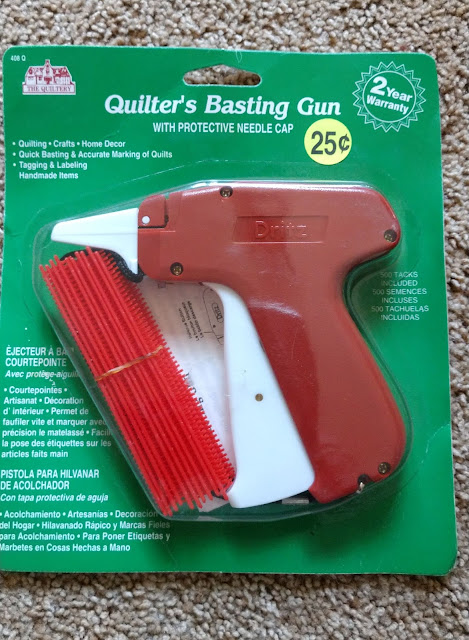 When I paid for my treasures, the seller said her mom would be happy to know that her quilting things were going to be used and loved. Awwwww I didn't ask if her mom was passed away, or just unable to keep on quilting.  Either way, I will finish up both quilts and enjoy the whole process.

Posted by KarenInTheWoods at 8:04 PM