Got a Shipment From Mexico

I have two sassy doggies who lead exciting lives...  and often that involves seeing what is going on OUTSIDE.  They fling their little bodies up on the chairs, footstools or ottomans to see out the windows.  It is important for them to see what is passing by. It might be the mail lady, a neighborhood doggie on a walk, or just our neighbor Diane hanging out her laundry.  It doesn't matter really what it is, just that it is INTERESTING and they need to see it.  And bark!  While they bark, they hold their bodies up on their dainty little paws, which are braced on the windowsills.

Their claws stretch out to hold them up, and they have made gouges in the woodwork of the window in the family room.  Fortunately, that is not an "original" woodwork windowsill, it had been added sometime in the 80's by the previous owners.  I have covered up the scratches with new stain and added new poly to seal it up.  But....  sometime in the future if I find old windows, we will restore that back to the way it was.  I hate seeing the scratches at any cost.

Since we rearranged the living room, now my "new to me" ottoman is located under the front living room window.  Those sassy dogs want to jump up there to see what is going on out on the front sidewalk.  When we are in the room, they know it's "OFF" and they don't dare jump up there.  But if we happen to be in another part of the house, they have no fear of our wrath, and ignore their inner warnings.  They jump up and park their paws on that windowsill and bark their fool heads off!


(they spit on the glass as they bark as well)

I tried to deter them somewhat by filling pretty containers with rocks we collected in Canada.  It worked for a few weeks. They still prop their claws and paws in between the containers and continue to bark to their heart's delight.   I see three tiny scratches already, and don't want anymore.

Most people would just say to move the ottoman --- but but but --- it looks so good there and I just covered it to make it coordinate and round out the new livingroom arrangement of furniture.

Soooooo I came up with another idea to preserve the beautiful windowsill..... 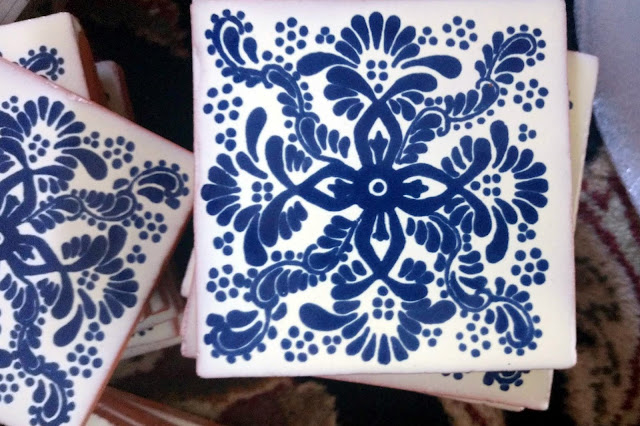 I ordered up 20 little hand painted Mexican tiles.  They were on Ebay for only $1.60 each and they offered free shipping from Mexico as well.  I only needed 12 tiles for the windowsill itself, but I ordered 20 in case some broke during shipping. The remainder I could make into coasters by gluing felt on the bottoms.

I was amazed to see them come packed in just a thin layer of newspaper (printed in Spanish which is cool)  and a thin wrapping of foam.  Not a single tile was broken or cracked!  Wonderful! I left the seller positive feedback on Ebay. 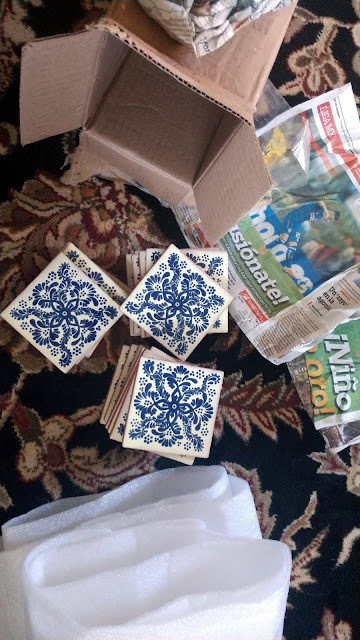 I didn't want to adhere the tiles to the woodwork, the idea is to preserve the original woodwork.  We had a sheet of plexiglass in the garage, so I helped Steve cut off a strip just the width and length that I needed. I drew with black magic marker along the edges of each tile so they were dark instead of the clay terra cotta color.   I got out my handy dandy glue gun... and a new pack of Gorilla Glue Sticks.  What on earth did we ever do before the age of glue guns??? 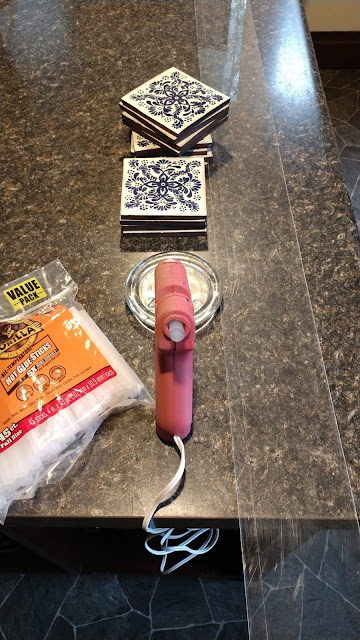 I glued them on one at a time to the plexiglass strip.  Working quickly so the glue didn't harden, I pressed each tile into place. The strip needed was 12 tiles long to fill the entire windowsill. 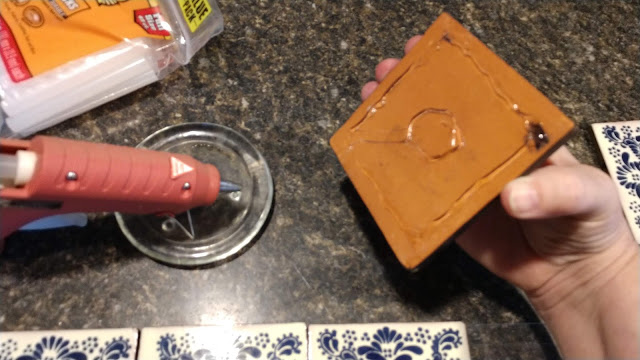 Steve came into the house and brought a 48 inch long board to help transfer the plexi strip from the kitchen island where I was working on it, to carry it over to the livingroom and slide it onto the windowsill.  Voila!  It worked out perfectly! 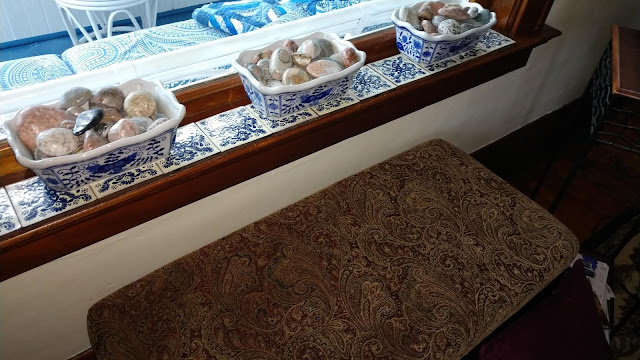 I still set the three containers of shiney rocks (that I had modge podge coated a few weeks ago)  and it all tied together.  I like the bits of blue and white with the Craftsman style decor in our home. 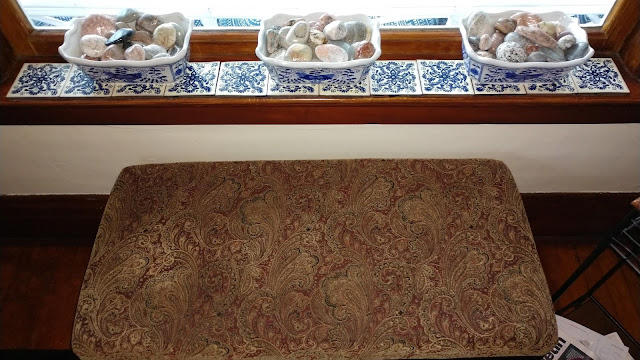 Now if those little stinkers do get up there and bark bark bark, their paws will just slip around and slide off and perhaps make them think twice about putting them up there.  The containers of rocks are serving double duty... they help weigh down the strip of tiles so they are not attached to the wood.  Also they are a way to display all the pretty rocks I picked from a beach in Canada and didn't know what to do with.

It's all worth it for these two: 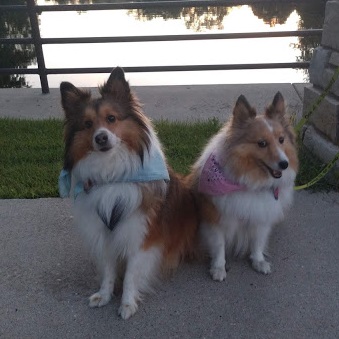 Now back to the kitchen to the rest of the tiles!
I cut little squares of felt the size of the tiles,
just a tiny smidge smaller. 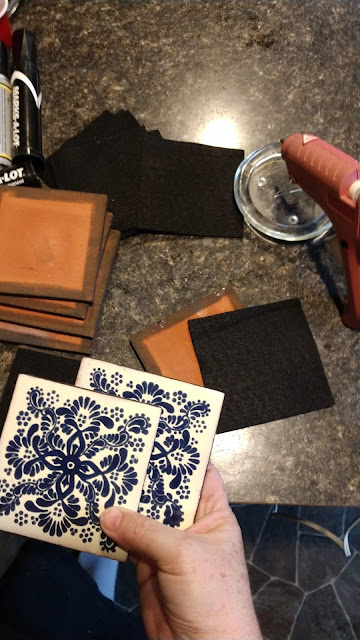 There we go... the glue gun did it's thing.  I have 8 coordinating tiles for coasters for the small end table between our chairs in the livingroom.  We often have drinks that sweat or make a ring on the woodwork if we don't use a coaster. I always have a glass of ice water at hand, so having pretty tile coasters is just the thing.  (I had some I made with other tiles we brought back from Mexico a few years ago that I can put in other areas of the house now)  I did put some on the coffee table and end tables in the family fiber room. 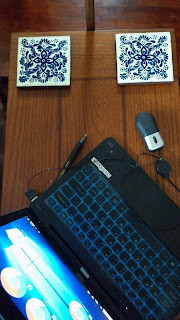 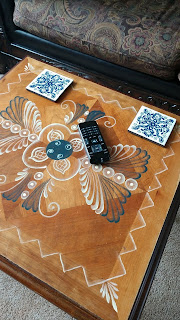 Our weather changed in Wisconsin overnight.  We went to bed after a high of 90 degrees, sweltering humid icky weather.  Storms moved in, and there was flooding in Green Bay overnight. They had 5-6 inches of rain in the matter of an hour or two.  Here in Chilton, we didn't get a drop, but did have a lot of heat lightning and heavy humid air feeling like a storm was brewing.

This morning things were cool, as a new front moved in.  We were down to the low 50's when we woke up.  Ahhhhh  Today was cloudy, but we had open windows, fresh air, and lower humidity.  Tonight it will be a lit fireplace in front of our chairs, but that is so much better than the humid junk we have had lately.  Actually as I type this, I have on wool socks and a quilt over my lap.

Stay tuned for an upcoming "Our Old House" project to come. We are working on it, and as soon as the mosquito population diminishes out there, we will put the new parts into action.

Speaking of mosquitoes: They are so bad that some sports teams have called off games or practices. Drive up restaurants have closed window and car hop service. Golfing and fishing numbers are down as well. Even campground reservations have been cancelled in unprecedented numbers because they are so bad....

Here is what they said on the NPR news site:

This is a particularly bad summer for mosquitoes in Wisconsin, because many of the insects survived over the winter.
The mosquitoes were helped by relatively mild temperatures and significant snow cover, according to Jamee Hubbard, an associate professor of biology at the University of Wisconsin-Stevens Point
"Mosquitoes will spend wintertime alive," Hubbard said. "There are some species that spend the winter as larvae in the water. Some of them spend the winter as eggs, and some of them spend the winter as adults, maybe under leaf litter or under bark. When you get a lot of snow cover it does a good job of insulating, allowing those mosquitoes to be able to survive.”
When the snow melted, it created a perfect habitat. Then, the weather turned hot and rainy.
"We had a lot of snow melt in the spring, and this created lots of pools of water that hung around for quite a bit of time," Hubbard said. "We had an immediate warm-up, and when it's warm out the mosquitoes will start to reproduce faster, their life cycle goes faster, and you get more of them."
Hubbard said in late summer there could be an uptick in mosquito borne illnesses like West Nile virus, Jamestown Canyon virus and Eastern equine encephalitis.
She urged Wisconsin residents to take precautions.
"The best way to protect yourself is to either stay indoors or wear long sleeves and pants while you're out," Hubbard said. "If you go outside, make sure that you wear an insect repellent, particularly one that has DEET in it. If you want to use a natural insect repellent, make sure that you are applying that more often, because it's going to wear out faster." 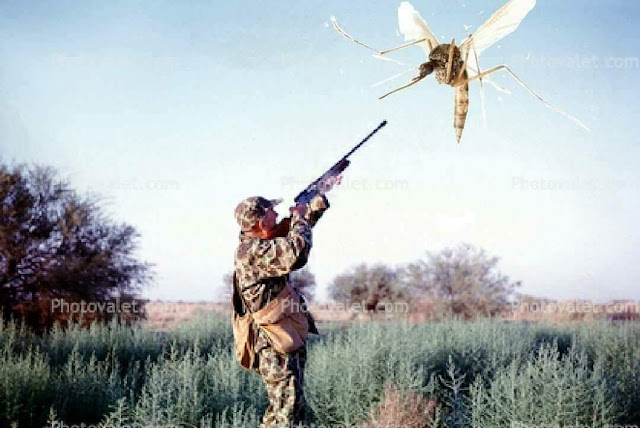 (me again)
We need a good hard frost or freeze to kill them buggers off!!!!

Posted by KarenInTheWoods at 7:50 PM