This morning we woke up to breezy windy conditions. That was absolutely wonderful news for us because it would blow away all of those pesky mosquitoes. We had an outside project to do and last night they were just atrocious, swarming and biting like crazy. I am not exaggerating on how bad they are this year.  After a mild winter, and lots of rain, we have a bumper crop infesting Wisconsin this summer.

When we looked out this morning and saw all of the trees bending and dipping and swaying, Steve said "Let's get out and do it" ... He had to leave for work in one hour so we hopped to it.

What did we do?
Well, here is a little backstory:

Our beautiful 104 year old house had originally been built with wood siding and wood trim. Then over the years, it had been replaced a couple times. There were asphalt slate shingles and some wider aluminum or hardboard siding we saw in some of the old photos from the previous owners.

The most recent covering was done most probably in the 1980s or 90s with beige/tan vinyl siding. At the same time the workers tore off any wood features and wrapped all of the exterior windows with aluminum trim. Yes, it's a no maintenance exterior, but it is also devoid of any interesting architectural details. We are not sure what was originally around this bay window in our dining room.  Inside, the dining room window is pretty leaded glass, with lace curtains and a vintage lamp.  But this 18 inch wide white expanse of plain aluminum above the windows on the outside is pretty boring. 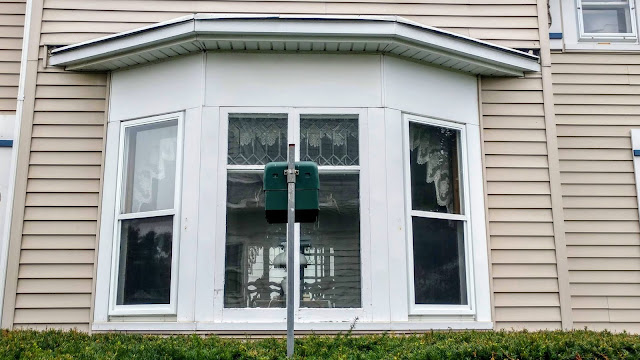 We had an idea to add some trim, called corbels, around the bay window to fill in that space. We looked at various ideas on other homes, on the internet, and at the building supply store.  Here were some of the ideas we came up with.  Trying to keep to a more "Craftsman" theme than a "Victorian" style. 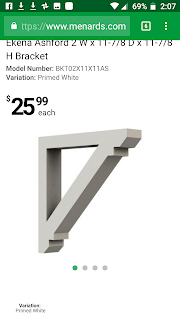 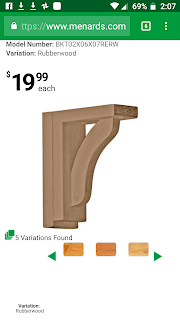 Hmmmmm I added a bit of blue to this one: 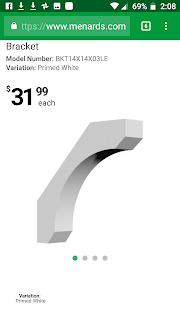 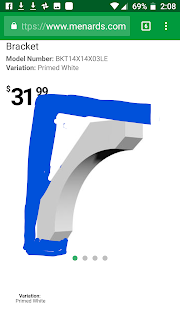 We needed seven of them to adequately fill in the space. If we had to add even more wood to those to make the blue sections, why buy seven little brackets at $32 each?  Well, to the tune of spending $200+ just for some trim, we decided to maybe build our own!  (we are retired on a pretty much fixed budget as well, ya know).  Time to get creative.

I kind of like this shape best, and it also mimics the curves that we cut out on the shutters that we installed two weeks ago. We didn't want things too frilly or bric-a-brac looking.  More structural and clean lines was our goal. 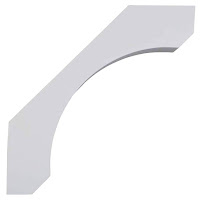 We knew it needed a little bit of blue trim behind this bracket or brace, to make it stand out against the white background. So I started thinking and went to work with some drawings. Then I traced something onto a board.

Steve cut it out for me so we would get an idea of where we were going with this...  Here is our first prototype made from scrap wood. 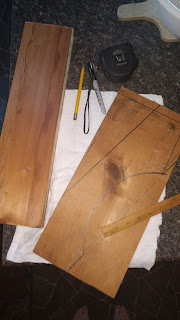 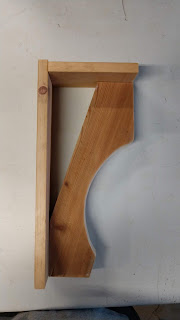 Okay, we had our idea and had our prototype. But we needed to make it thicker. We didn't want to go out and buy thick planks to cut out this pattern. That can be really expensive too. Now he started to think. Steve gets a lot of thinking done while sitting in a lawn chair out in his garage. Notice the beer sitting on the lawn mower next to him to help him think??? 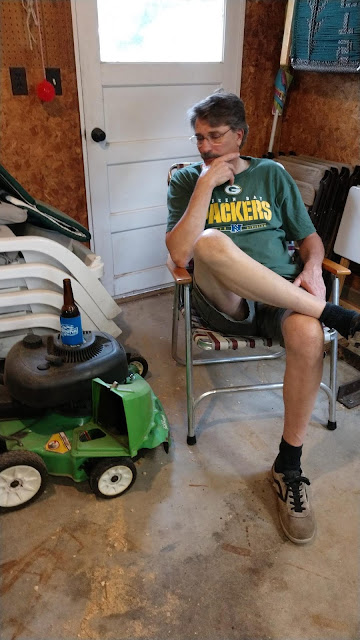 He had an idea--- 2 years ago I bought him a nice newer metal workbench for his garage. The old bench in the garage was wooden, made with some very heavy planks. He took that old bench apart and had saved all the wood. We always save our wood. Recycling at its finest.

He took out some of those big thick planks from the old workbench and they were exactly the thickness that we would want to make corbels!!  They are about 2 and half inches thick and would be fine for some hefty trim work.

So Debbie, Laura and Paula --- your grandpa's workbench now has a new life as trim on the outside of his beloved home!!!

Steve cut out the big thick pieces from the old planks and sanded them smooth. He also had found some leftover 5" wide lumber from the garage attic to make the backing and top support boards as well. 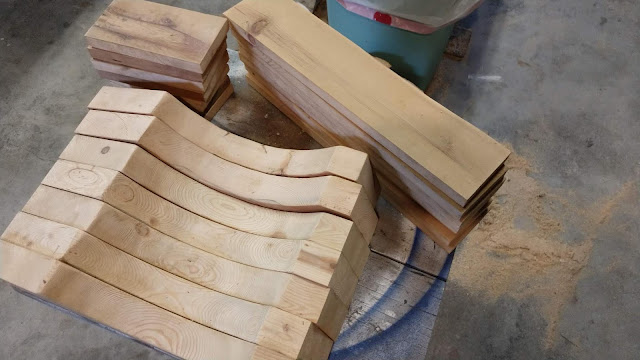 Now it was my turn. I got out the solid colored stains and turned the corbel pieces white, and the backing and top support pieces blue. That blue matches the blue trim blocks we put on the shutters and the trim strips on the front porch and our window boxes too. 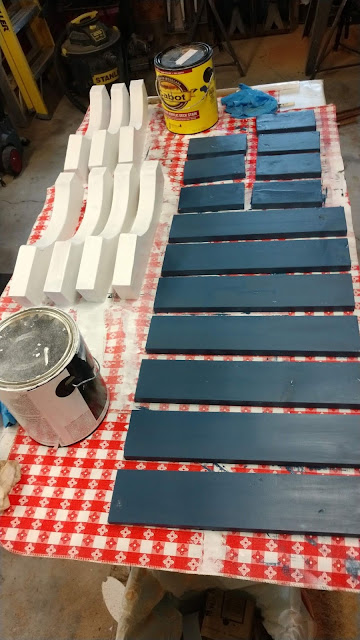 Yesterday, when Steve came home from work, he assembled the pieces all together on the work table.  He used coated screws so they won't rust or rot away over the years.  We want these to last.
Oooh oooh oooh They look so cute! 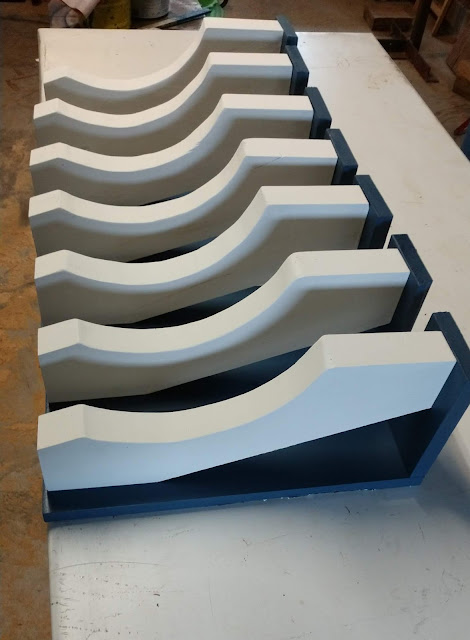 The mosquitoes were just eating us alive last night when we were trying to measure and figure out exactly where we wanted them. We decided to retreat back inside and wait to install them.

This morning it was perfect with the windy breeze is blowing the little buggers away. Now we didn't have to spray ourselves full of DEET mosquito spray just to get these things installed.

Up on the ladder and leaning over the hedges, Steve started screwing in the first one after making sure it was level and plumb.  Again, he used coated screws that won't rust or make marks on the white wood or streaks on the aluminum over the years. 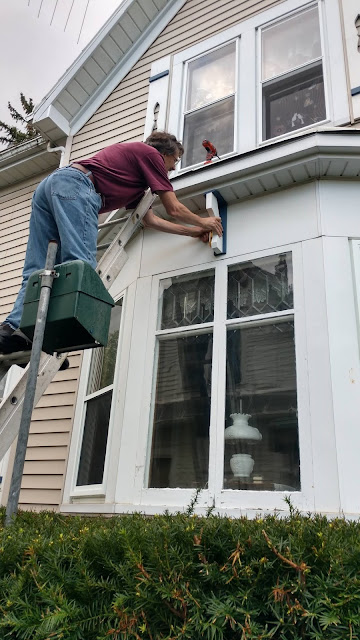 It didn't take long to get all seven of them up into place. He moved the ladder over from place to place, and the birds hiding in the hedges were upset with him. They were all a-twitter and giving him quite the chewing out.

We get a lot of birds that hang out here with our bird feeder smack dab in the middle of the hedge. We just added another feeder bracket near the window by the livingroom as well (on the left) It's nice to watch them, especially in the middle of winter.

It didn't take Steve long to get the corbels all installed. 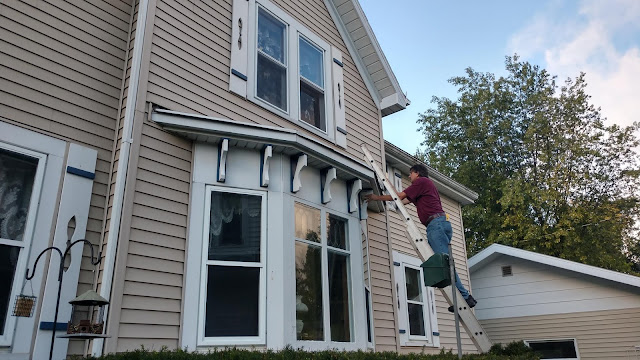 NOW THAT IS WHAT I WAS TALKING ABOUT!!! 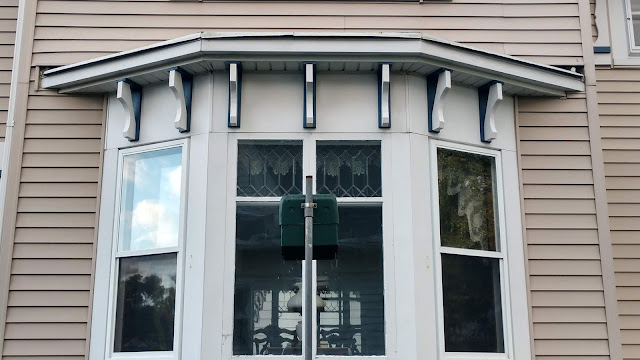 From the road you can see the cute angles and curves. I think that the backing pieces in blue makes the white bracket part stand out better than if they had just been white against the span of white aluminum. 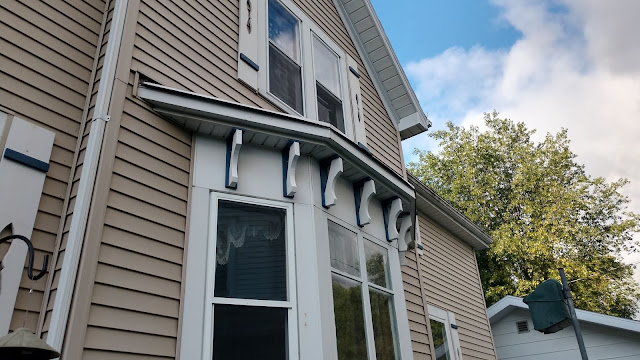 So there you have it,
Our Old House is getting a little more trim on the outside,
to bring out the beauty that she really is on the inside. 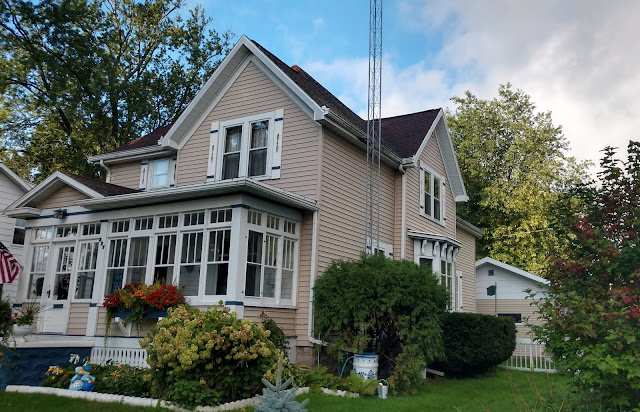 I really think this trimmed out window nicely adds architectural detail and interest. It harmonizes nicely with the shutters that we added. We are not sure if this is what was here originally, because the only photo we have of the house from way back then doesn't show this side bay window. 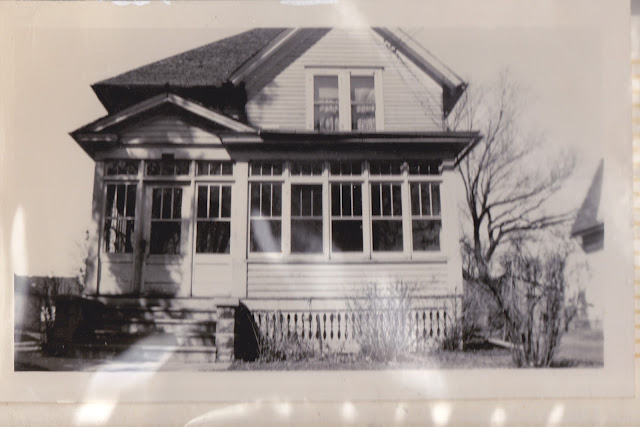 I found an interesting photo editing app on my phone that makes a "sketch" of our house!  I think this might look kinda cool to print out and frame as if someone really drew it. Neato! 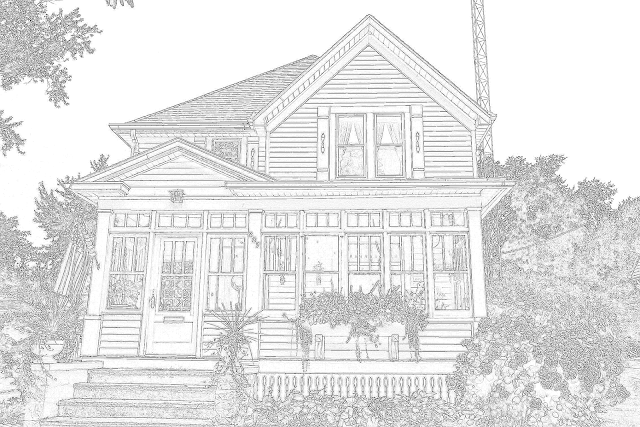 Well, off to bake an apple pie this morning,
and it feels like Autumn outside. 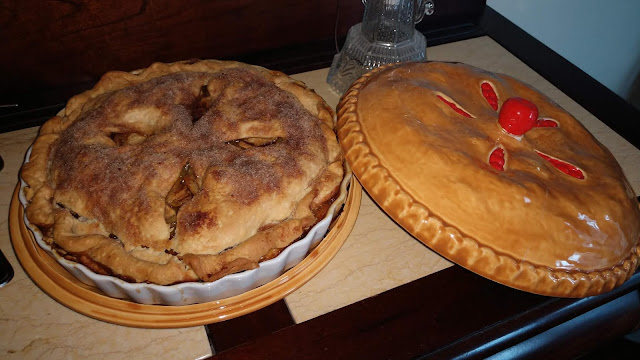 Posted by KarenInTheWoods at 10:18 AM