Got Off Track Here! Shuttered Up

and now summer is over.

The last few weeks I haven't been posting any blogs.

We hid out in the house with the central air on the hot humid days.
We have had visitors, and we have been visitors.
We have babysat grandkids and spent time with parents.
We didn't get in ANY camping. Sigh. We were going to go this upcoming weekend, but plans changed with a health issue cropping up with some friends.

I can write about each of those to catch up in the next few days, and finish up my 3rd post about the things we changed in the house after buying my new chair.

But we DID do an "Our Old House" Project I can write about.

It's been such a hot and humid summer, that we really didn't work on any projects around the outside of our old house.  We wanted to, but the weather hasn't been cooperating.

The previous owners had put on vinyl siding which is rather plain and beige.  It's nice to have no maintenance, but even the aluminum wrap around the windows was also rather plain.  NO character. 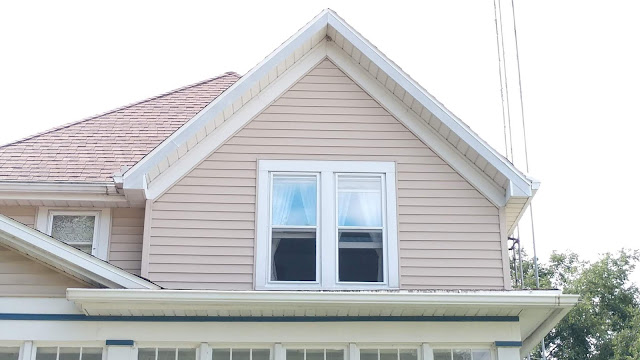 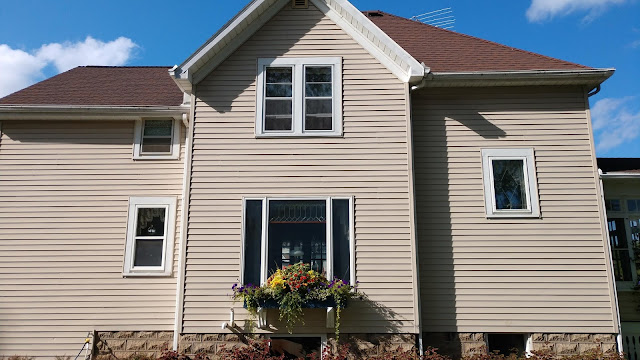 (we did add window boxes this past spring)


Finally, the humidity dropped, the weather was nice, and we dug around in the attic of the garage.  The previous owners had left behind a bunch of lumber and scrap wood up there.  There were a bunch of nice big long 1x10 planks that were in perfect condition.  I had a plan in mind---- and Steve agreed! 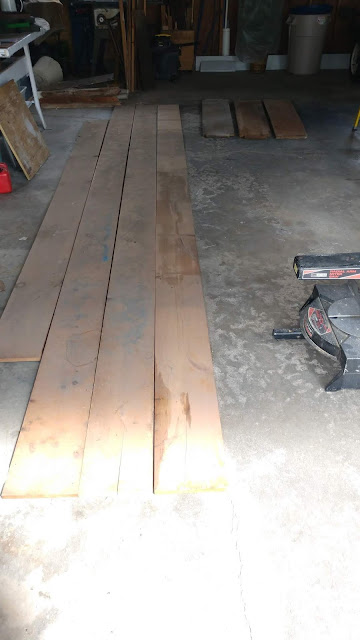 We hauled down the boards and I had made up a cut list after Steve helped measure six of the windows on our house. Steve choice was the six windows people can see from the road.  More on THAT later....

Using a template made from the cutout shape of the lattice fretwork under our front porch, we made up a design for our new shutters!  Steve also came up with the idea of a 2 inch block of blue on the top and bottom margins, and they also match with the trim blocks we painted on the front of the house earlier this spring. 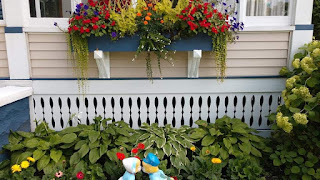 He gave his nod of approval on the first cut out.

Steve started cutting, I did the sanding, and soon I was able to coat each board with 2 coats of paint.  We added the blue blocks on each shutter to dress them up. 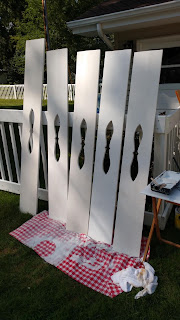 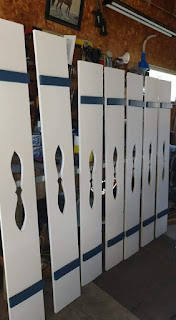 Soon the shutters were ready to hang!  We completed the six windows that Steve had decided that needed to be done.  That covered mostly the front, south side and two windows on the north side.

We mounted them to the vinyl siding with little spacer blocks so they do not press down or impede on the vinyl siding.  The vinyl needs to contract or expand with the weather, so only attaching the shutters with two long screws and not tight to the vinyl was the best solution. I painted the heads of the screws so they didn't show too much. 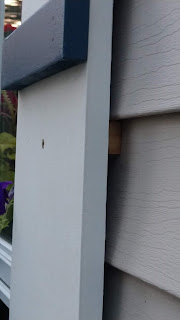 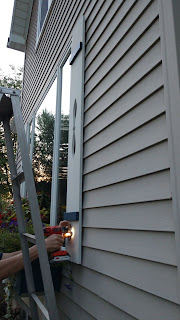 Someone asked me why did we go to all the work to build our own shutters?  Why not just buy some and put them up?  Well, first of all, those would be just average vinyl shutters like everyone else has.... and second of all, at a cost of about $45 a window, times 6 windows... ack... $270.00???  Well, this wood was FREE and it was only our hard work to make them and put them up ourselves.

We were lucky with the upper windows, we could install them from inside of the house, by leaning out to mount the shutter on the outside.  Our old house windows still slide down from the top or up from the bottom.  Because they are still original wood and not painted shut.  Yes! 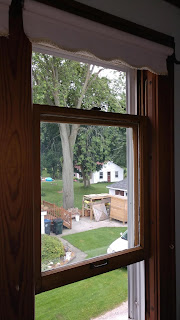 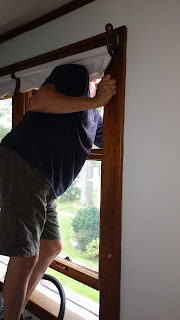 We got all six windows done and it sure looked nice.  Steve was satisfied with just doing the six windows that were visible from the road. While installing the 6 sets, we had a few neighbors stop and admire them, and even one lady whom I didn't even know stopped to comment about our window boxes as well.

I wanted all 14 windows to have shutters, so the house looked "complete".  Even Pops Pfundtner weighed in on the idea of all the windows needed shutters to look nice.

(little did Steve know that the following weekend we would be buying MORE planks and making enough shutters to finish ALL the windows ALL the way around the house!)   But that wood was on sale for only $58.00. 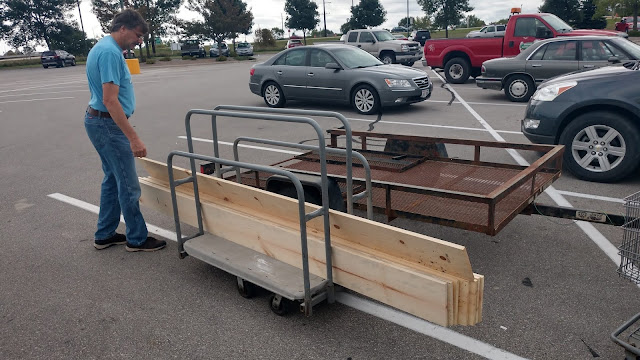 We got them all cut out and sanded and painted in one morning. The weather was cooperating and we got 8 more pairs for the windows all ready. 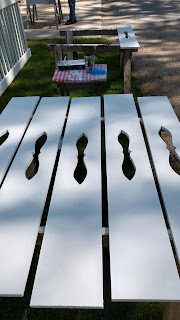 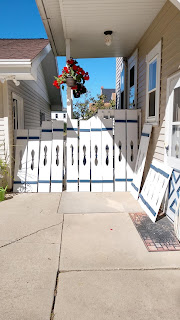 We ran into one snag, we had to move a rain gutter downspout, so Steve had to borrow the neighbor's ladder to get up that high. I held it from below and had the phone ready to call 911 if he fell. We were hoping to do them all from inside the second story and avoid the ladder completely.

I think we are getting too old for ladders!

Soon the house was complete!  Ahhhh I think it's a little cutesy, but Steve agreed that it really dressed up the house from the plain beige vinyl. 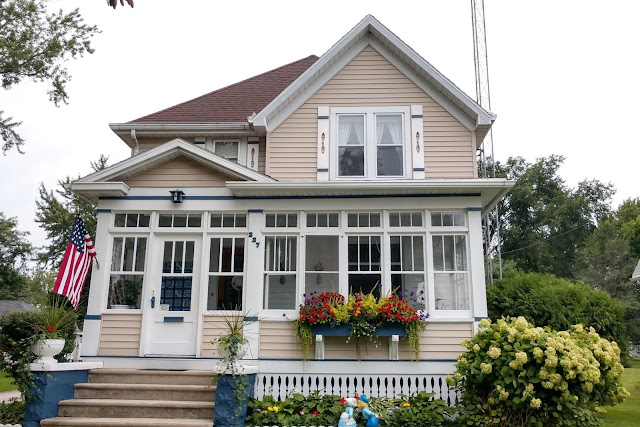 Here is the backside of the house, where we usually enter from.
I am glad we put shutters on these windows too!
They are the ones we see most often. 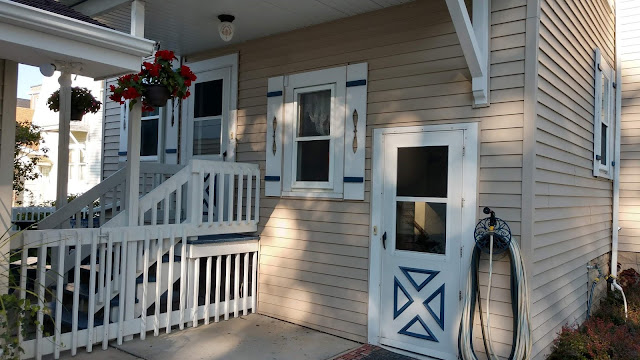 The north side of the house also has a big bay window.
I am going to add some little corbels under the overhang of the roof
around the bay window to dress that up later. 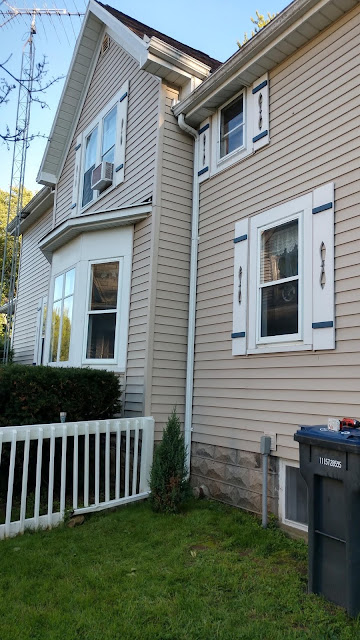 This is the south side, the most boring big beige side.
I am glad it's spiffied up now.
This is the side we see each time we come up the driveway. 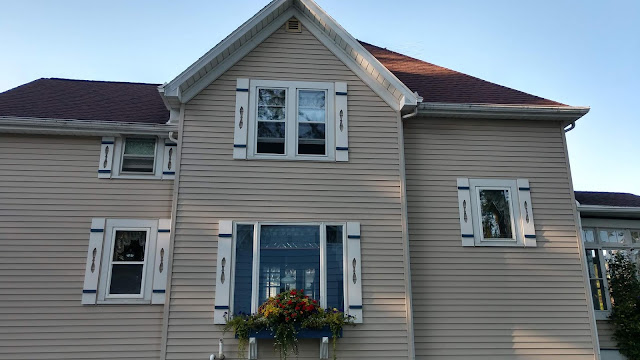 Here is the house from the last angle with the top shaker porch and side gate too.... I am really glad we went all the way around with the shutters. Steve agrees now that it looks better. It was worth it. 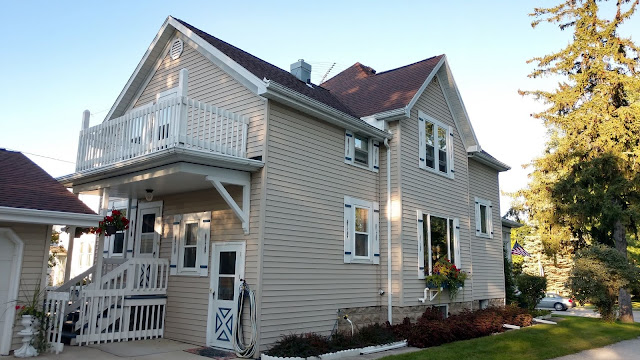 Hmmm I wonder how he feels about shutters on the windows of the garage?

I will have some future blogs about changing the muffler on the motorhome. Steve just got it in the mail today from FedEX and the dogs were so excited to get some big boxes from the mailman. 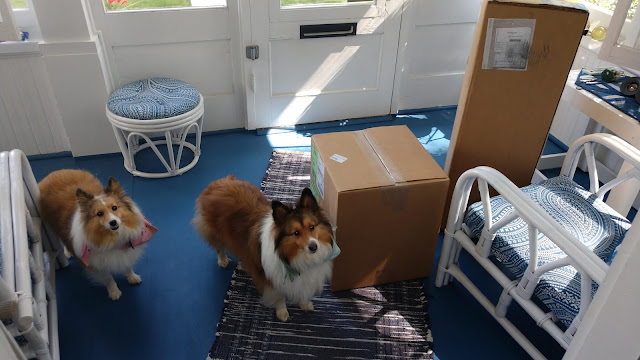 I will be posting about our camphosting at High Cliff State Park coming on Oct. 1st. And the big Halloween Celebration that is held there, this year it's the first weekend in October.

I will be posting about the quilt I have on the frame today. I started stitching some pretty hooks and swirls.  I think it will be kinda cute once I finish it. 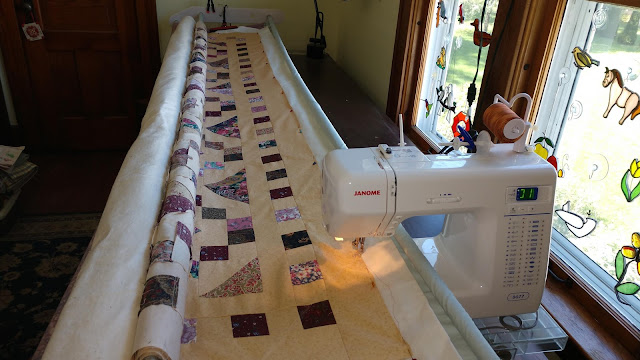 Here is the stitching
and here is the quilt top
laid on the queen bed in our guest room. 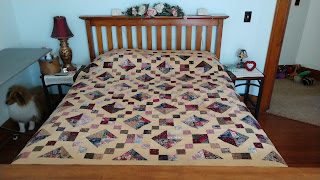 I will be posting about our trip coming up in later October and into November to visit friends in Tennessee and then on to the folks in Florida.

I hope to just keep on posting!
Gotta get on track!

Posted by KarenInTheWoods at 9:03 PM